When Doc Brown set off into the future, he claimed he didn’t need roads where he was going, you know, in 2015. Well, here we are, six years past that and still dealing with the side effects of gravity. We may not have flying cars yet, but we still have a small slice of the future available now. I’m talking, of course, about electric vehicles, two homegrown ones at that.

The Tata Nexon EV came out early last year and remains one of the most impressive EVs I’ve driven so far. And then there is the Ather 450X. There have been electric scooters before it, but none that offered the range and functionality that the 450X managed to squeeze into its trellis frame. As far as scooters go, the Ather is the most alien-looking one on the market and the special edition seen here is even more so, thanks to its translucent body panels exposing its trellis frame and electronics. The Nexon EV, on the other hand, subtly sets itself apart from its internal-combustion brethren with the help of light blue accents on its lower grille and window trim. 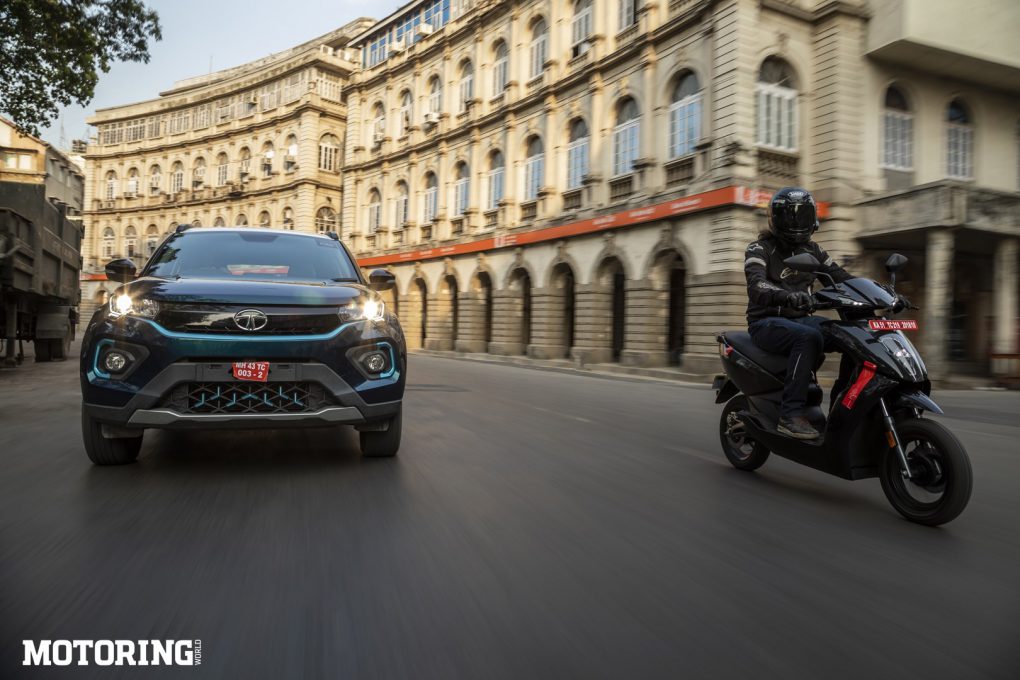 To say they take different approaches is an understatement, of course. The Ather is a ground-up rethink of what an electric scooter should be, while the Nexon EV is, well, a Nexon with an electric powertrain. Perhaps I’m oversimplifying it a bit, though, because the platform that underpins the Nexon EV was designed with electrification in mind from the beginning, which explains the lack of compromises needed to make it a full-fledged EV. The battery neatly stows under the passenger cell and only reduces ground clearance by 4 mm over the regular car, and rear-seat passengers don’t have to worry about it eating into their precious legroom, either.

This difference is also apparent in how you interact with these vehicles. The Nexon EV ditches the traditional shifter for a rotary knob, but other than that, the rest of the controls are pretty standard. Conversely, it would take me a few hours to properly explain all the functionality the Ather’s vibrant touchscreen offers, however. It uses an Android-based OS and swiping through menus is just as intuitive as using your phone. Anyone who grew up with video games will also love its control schemes because you can access additional functionality by pressing a combination of switches. Want to activate park assist? Just hold the brake lever, the indicator cancel switch and the power button, and voila! Like your browser, the 450X even has an incognito mode so your location isn’t stored in the scooter for the other users to see. Ahem!

On the move, the Nexon EV actually drives better than its ICE counterpart, primarily because of its perfect 50:50 weight distribution and lower centre of gravity offered by its battery packs. The steering offers no information about what the front wheels are up to, but the car does respond to your inputs quickly and accurately. The same goes for braking; in other EVs, you usually have the option of selecting the amount of regeneration you’ll need, but in this, it’s been set at an optimised level which is easy to get used to, but the brakes feel a little unresponsive because of that. Despite all of this, the Nexon EV rides better and also handles far better than the regular Nexons. All that weight centralisation definitely comes in handy here.

I wish the same could be said of the Ather, though. It feels like it’s been built by someone without any scooter-building experience. It struggles to hide the weight of its batteries and you notice it when you hit bumps and potholes as the suspension dives and jostles you around. Sure, it has the weight really low, which helps, but more weight means longer braking distances. The riding posture is also such that at full lock when turning, which is a lot on a scooter as you filter through traffic, the handlebar hits the knees And it doesn’t feel as solidly put together, either, even though individual parts seem of really good quality. The instant torque it delivers in Warp mode makes up for all of that, though. Zooming through traffic is a breeze and overtakes don’t require planning like they usually do in other scooters.

For both, coming from traditional ICE vehicles, the lack of noise is something that you need to rewire yourself for. We are so used to associating engine noise with speed, that you don’t realise the vehicle is actually going rather quickly. There is some whine from the electric motors, but it’s easily drowned out by traffic noises. 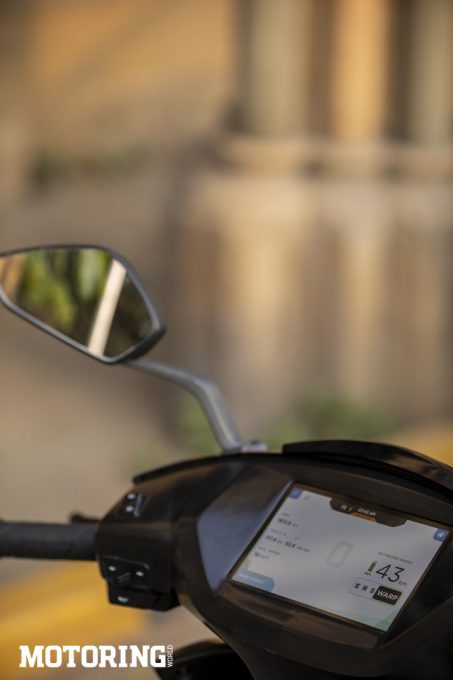 Now we come to the important part — charging. Tata will install a wall charger at your residence and a full charge takes eight hours. There are also a few fast chargers available, which you can navigate to using the infotainment system, and those chargers can juice you up in just an hour. A full charge is good for an ARAI-certified 312 km of range. Let’s be honest here, the charging network isn’t good enough for you to be taking road trips in the Nexon EV anyway, and for city use, that range is more than adequate. In fact, you can be quite liberal with your right foot because you don’t have to worry about running out of charge in the middle of nowhere. 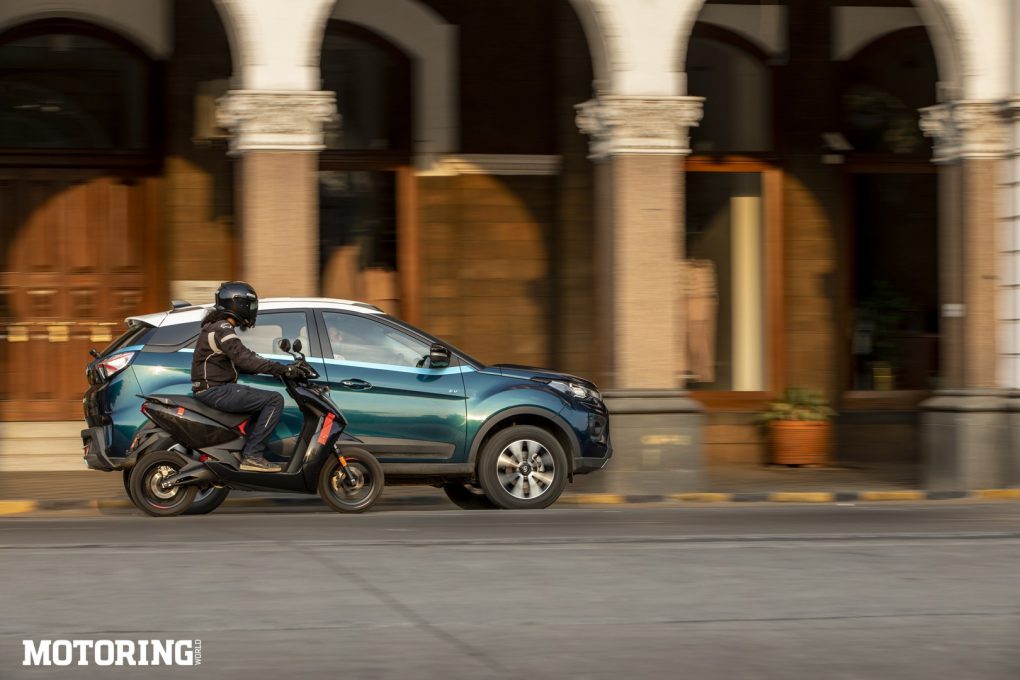 The Ather also offers a charging station called the Dot. Unlike the Nexon EV, however, it doesn’t come with fast charging. From what I gather, though, it doesn’t need fast charging anyway. I’ve rarely met anyone who’s travelled more than 30-35 km in a single day on a scooter, which is more than enough to come back home and charge overnight. It doesn’t need a fast-charge network, and not having the additional hardware and saving on cost is fine with me. For emergencies, there is also a portable charger which only needs a 15 Amp power socket. It doesn’t look good, but it will get you home in a pinch.

I think the Nexon EV and the 450X are both fantastic products on the cusp of a revolution. Sure, they both have some teething problems, but as a whole, they’re both fast, exciting and feel like the future. What they really need, though, is more adoption from enthusiasts. Ather seems like the company that will listen to its customers, but if all those customers are merely tech enthusiasts, then they are going to define the direction that development takes. 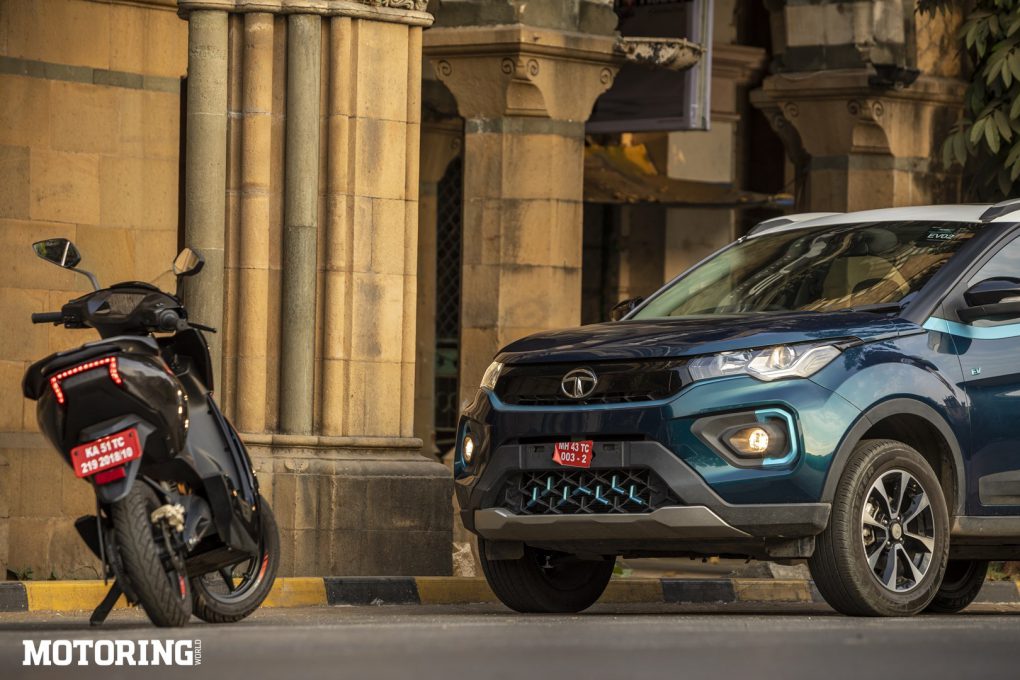 When we think about the future, range anxiety and early adoption rarely figure into our plans, but without this level of real-world beta testing, progress is pretty hard to come by. What we need are enthusiasts to adopt new technologies, so we can be part of that story and decide its development direction. Only we can tell Ather that the 450X clearly needs 14-inch tyres with that much torque and power, as 12-inchers have no business being here. Or that the Nexon EV would come with a more communicative steering rack. This is the overarching message I wish all ICE enthusiasts get. Because the EV is here, and it is here to stay.