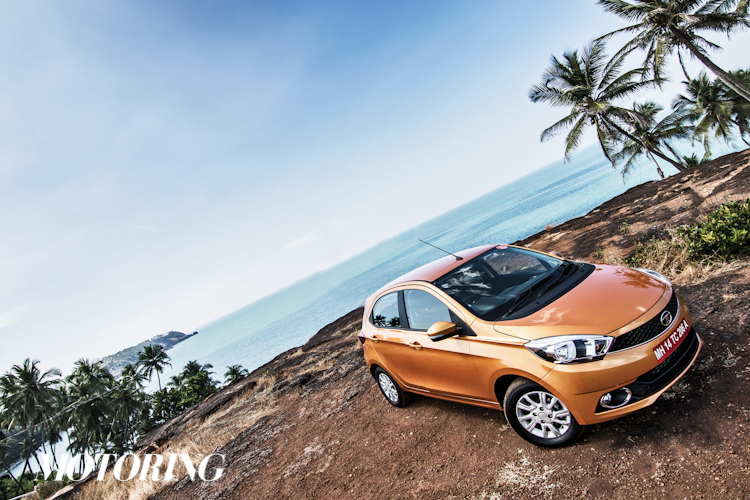 Every time a manufacturer says ‘all-new model’, the cynics will try and find out how it isn’t. And they’re usually right because there are a thousand small things carried over from the outgoing model. These are the things that aren’t broken; the things that will ensure a reliable product and returning customers. A completely new product means convincing even these loyal customers and also dealing with a new customer base. Tata will look to replace something that is very not broken in the Indica eV2 with this, the Tiago.

WHAT’S TIAGO LIKE?
If you parked it with other models from the range, it will fit right in, and that’s a very good thing. Tata has managed to modernise the looks of its new model without letting go of the things that make it a Tata. There’s what they call the ‘humanity line’ and what we like to call the ‘smiley grille’. This time it is a gloss-black-honeycomb affair, with large single-reflector headlamps flanking it. There are also silver eyebrows for the headlamps, chrome rings surrounding the fog lamps, and a smooth bonnet devoid of the bumps and creases that are increasingly making their way onto the sheet metal of cars. It’s the same story on the side — nicely designed alloy wheels in white coupled with a strong shoulder line and one other crease.

At the back, Tata has surprisingly eschewed chrome completely, which is a good thing. The rear bumper hides its extraordinary height with an oversize matte black section for the number plate. The hatch has an integrated wing, with two gloss black extensions at the corners for improved aero, says Tata. The tail-lamps are our only dislike on the car. For one, they remind everyone of the Grand i10/Figo, and the internal elements aren’t a clean design like the rest of the car.
Overall, we’re very impressed by the Tiago’s styling. Tata has opted for a clean, fuss-free design where a lot of other manufacturers seem to be hiring  cubists to design their cars; the Tiago  will age gracefully.

IS TIAGO IMPRESSIVE  ON ZE INSIDE?
In a word, yes. There’s new textures, new colours and surprisingly for Tata, no beige for the top-spec variants. There’s a black-and-grey combination with touches of silver and chrome and it’s a very tasteful design. First, there’s a Honey-I-Shrunk-It version of the Bolt’s steering wheel, but the thickness of the rim remains. The dials are a two-pod cluster with a silver finish for the surrounds — a simple set of chrome rings for the dials would have been a better choice of accents. Not only would it seem more premium, it would also match with the chrome-ringed AC controls and vents, and chrome door handles. The audio system has an integrated head unit which will be difficult to upgrade. Not that you’ll want to, though, as there are many cars even two price brackets above that don’t offer such clarity in their audio system. Plus, the head unit now offers turn-by-turn navigation over Bluetooth using an Android app installed on the phone. It will soon be available for iOS, too. Another app is a ‘jukebox’ app that allows you to queue and play songs from multiple phones via a master phone paired to the system. Needless to say, this is another app that needs to be installed on the phone.

The seats are plush and comfortable, while the dash is sober and looks high-quality, and even the pedals aren’t offset any more — long a bugbear of Tata products. However, the storage spaces in the front doors aren’t bottle-friendly, the cupholders in the centre console are too shallow to be of much use and the plastics are hard to the touch. There’s the elephant in the room as well: Tata has made a car that doesn’t have space that makes cars a segment above rub their eyes in disbelief! No, really. The front seats are all that and then some, but push them all the way to the back and knee-room reduces to the amount of sense in a ’90s Bollywood movie. Don’t let the negatives sway you, though, because the positives far outweigh the negatives, and — dare I say it — this is a Tata that is desirable in many ways.

ARE ZE ENGINES ANY GOOD?
They’re new! That’s the first thing you’ll notice. They’re branded ‘Revotron’ and ‘Revotorq’. No points for guessing which is which. You want to hear about the diesel first, we know, so here goes: a 1.0-litre diesel engine (let go of the extra 47cc in the literature, Tata, really) made with a cast-iron block and aluminum head makes 69 bhp at 4000 rpm and 14.3 kgm from 1800-3000 rpm. These are numbers that equal the Hyundai Grand i10 on power and surpass both the Grand i10 and Maruti Celerio on torque. It is a refined unit that does what it says on the label. We’re sure that this will have incredible real-world fuel efficiency, but this is a grown-up engine that doesn’t want to play. Rev it hard, and there’s nothing to be gained. It is best to short-shift and use the torque to gather momentum rather than try for  outright performance.

The petrol is the surprise package. It displaces 1.2 litres, but unlike the motor in the Bolt, this is a three-cylinder unit that generates 83.8 bhp at 6000 rpm and 11.6 kgm at 3500 rpm. This motor is responsive at any revs and makes a pleasing noise when given the stick. It isn’t quick, but is enjoyable to hustle along. Again, another surprise — Tata has offered a petrol that is far more enjoyable than the diesel. Both motors get ‘modes’ like the Zest and Bolt petrols do, but they’re restricted to ‘City’ (the default mode) and ‘Eco’. The difference in throttle response between the two is discernible, but only just. Both are paired to 5-speed manual transmissions, and even though there is no commitment from the company about AMT versions of the Tiago, we look forward to seeing them in the future.

HOW IS ZE DRIVE?
Like we’ve mentioned before, the diesel motor doesn’t exhibit much willingness to play, but the ride/handling compromise is good. Tata has moved away from the castors-for-wheels look and as such cannot offer the sublime ride quality of its previous models (hey, you win some, you lose some), but the Tiago rides well at city speeds. On the smooth roads of Goa we couldn’t cruise at highway speeds and neither could we tell much about the bad-road handling of the Tiago, but initial impressions are good. The chassis is stiff and the suspension is compliant, which makes handling predictable. There’s a surprising amount of side bolstering for the front seats, so we’re hopeful of a good time when the cars make it to us for a full review!

SHOULD YOU BUY ZE CAR?
It all boils down to the price. The Tiago meets or exceeds all the requisites of the segment comfortably. Sure, there isn’t as much space in the back as the Celerio, but what Tata will have to keep an eye on is the sheer value the Hyundai Grand i10 offers at the price. If Tata can split the two on price and put the Tiago on sale for a little over Rs 6 lakh, ex-showroom, Delhi, it’ll have a winner on its hands.