You know how mass-market carmakers have a variant for every price bracket? It seems like Mercedes is offering just that with the Maybach S 580 and the S 680. It’s for those who want an even more luxurious version of the ‘best car in the world, which is a tough moniker to live up to in any case. In a move that will help make that opulent degree of luxury even more approachable, the Maybach S 580 is locally assembled, which, theoretically, has brought the price down. So how exactly has Mercedes gone above and beyond the S-Class, while maintaining ‘approachable’ opulence? Well, there’s some subtle bits of change, and some not so subtle bits. 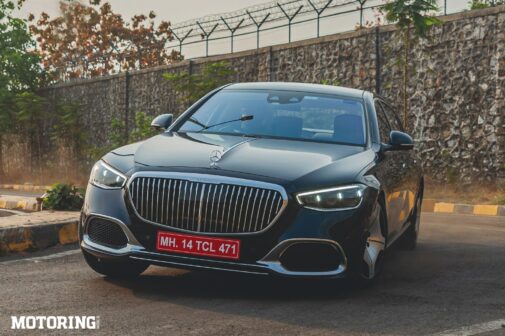 Stood alongside the S-Class, you’ll see that the Maybach has been stretched further, both in the wheelbase and in overall length. The S 580 carries the extra girth quite well, as the small quarter glass behind the lengthened rear door, the B-pillars finished in brushed chrome, and the big monobloc-design 19-inch alloy wheels accentuate the limo appeal. While previous Maybachs sported a unique design — rather than unique design elements — this does not take away from the fact that the S 580 does look more stately than the standard S-Class. And that’s further underlined by a number of Maybach logos and badges, along with added chrome trim, which, I have to admit is tastefully done.

It is on the inside that the Maybach goes the extra distance to differentiate itself from the S-Class. There’s acres of space for two rear passengers, so much so that the person sitting on the left won’t need to use the ‘Chauffeur Package’, which allows you to move and fold the front passenger seat forward. The centre seat is usable, but, honestly, the rear seats are meant for two. The two independently adjustable outer seats recline to an impressive 43.5 degrees, you can set how tightly the side bolsters embrace you, and then there are the fold-out ottomans, which also massage your calves.

It blew my mind that there are four ways to open and close the rear doors — the driver can do it through the portrait-oriented 12.8-inch central touchscreen, there’s a button above the rear doors, the standard pull the door shut using the handle, and there’s the ‘Royal Wave, which allows you to literally wave the door shut. The gesture control works for the sunroof, too, and is a bit gimmicky, but it also works quite well to give you that first-class experience. What really took me by surprise was the motorised ‘arm’ that extended to hand me the seat belt!

It’s quite clear that the Maybach will provide a tech-heavy, yet luxurious experience, what with the most comprehensive ambient lighting package ever seen in a car, along with the backlit, brushed metal Burmester speakers, and the chequed, almost carbon fibrelike finish all around. Sitting in the cabin, I had virtually no cause for complaint, but then I noticed that I couldn’t reach the excellent front seatback-mounted touchscreens. And then when I was rooting through the brochure, I was almost shocked to see the lack of customisation options. No dual-tone finish, no extra options to tick…. that’s a bit a letdown, but then again, I honestly didn’t feel the need. For those who want those options, splurge a mite and get the S 680.

On the move, there’s nary a sound, whether it’s due to the active noise cancellation from the superb 30-speaker, 1,750W Burmester speakers, or the insane amounts of cushioning and deadening material used. However, the pleasing V8 rumble does filter in when you mash the lovely Maybach etched go pedal. This 4.0-litre engine makes 496 bhp and 71.38 kgm of peak torque, and is assisted by an electric motor that can pump out an additional 20 bhp and 20.39 kgm, which is enough for this 2.3-tonne limo to blast past the ton mark in under 5 seconds. The 9-speed automatic is probably the smoothest I’ve ever felt as it was only when I took control via the paddle shifters could I tell the gearbox was shifting through the cogs.

It’s too bad the suspension is too soft (and the car too expensive) to push the Maybach into corners, hard. The front seats with their active side bolstering do encourage you to push a little, but just a little. Even in Sport mode, which makes everything a dash more dynamic, there’s enough give from the active suspension to eschew any aggressive cornering. On the other hand, Sport mode is also where the Maybach doesn’t feel as floaty on the highway. There’s a Maybach mode too (other than the standard Comfort), which can be considered as Comfort Plus, and while it works brilliantly at city speeds, I wouldn’t recommend it for those who have motion sickness and are going on a highway jaunt. 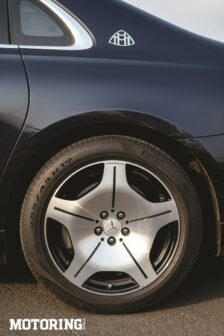 Speaking of city driving, despite its gargantuan size, I found it surprisingly manoeuvrable in tight spaces. I had to flip through multiple screens on the infotainment system to find it, but there’s a ride height adjustment available as well. It was especially helpful when navigating some of those bulbous, and sharp speed breakers that are scattered around Mumbai’s roads. It was only during a hairy moment, when a biker on the other side of the road cut me off to avoid hitting an oncoming bus, that the bottom did scrap. 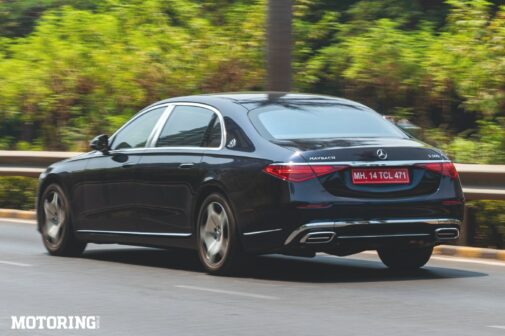 Nonetheless, so comfortable was the experience that this is the first (and only) time I will admit, I would have this over a similarly-priced sports car. The near-Rs 1 crore extra you pay over the S-Class is, in my book, completely worth it, and it seems like Maybach customers agree wholeheartedly. In fact, I’m told the S 580 is sold out until the end of the year, which is a shame for those who would want one. Still, good things come to those who wait, and in this case, it’s a damn good thing.