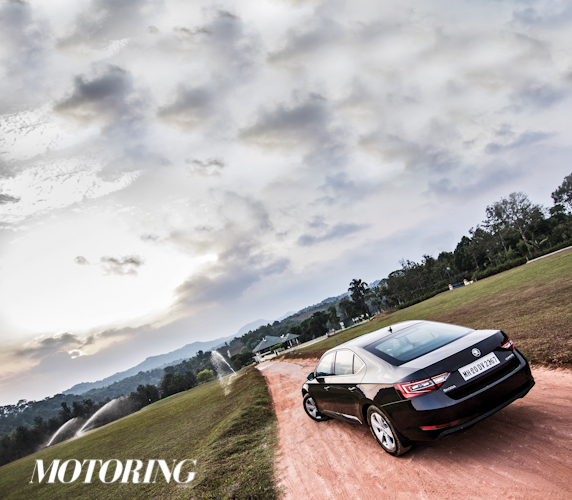 When does the pursuit of perfection end? More so, does it end with a bang, or an anticlimactic whimper that elevates you to a realm of peace and contentment? The answers elude me, as always, but I have a feeling the guys at Skoda know what I’m on about and if they’re reading this, they probably have a wry, knowing smile. Shed some light, won’t you, guys?

Getting back to the point: The new Superb. I’m a big fan of the way it looks, to be honest. I’m not, of the current Superb, if I’m honest again. There’s not a line out of place and it’s a stupendous effort at making the others look relatively drab. Right from that lovely grille to the way the eyes have been fit in and the beautiful detailing at the rear, it’s hard to not be sold on the work done here the moment you see it. There’s purpose in its stance, and a swagger that’s unmistakable even on the inside. Functional, to-the-point, and classy would be the words of choice to describe the cabin.

I’m going to harp on this once more: It’s perfect. The steering’s lovely to grip, you’re surrounded by quality switchgear, the touchscreen works like a charm, the instrument console has just the right amount of readouts, and at all times you’re mollycoddled by the seats into absolute bliss. The Superb is a rolling equivalent of a pick-me-up in a cruel and trying life. It’s not just the front I’m focusing on, either. Thanks to the kind of setup we have here in India, a fair few owners will buy cars like the Superb to lounge around at the back and there’s an immense amount of space to allow just that. It’s like one of those recliners that cost roughly four buckets of popcorn at the movies, really. I’d have liked a bit more thigh support but that’s no deal breaker.

What, then, of the way it drives? The options available to us on the drive were the 1.8-litre TSI with a 6-speed manual and the 2.0-litre diesel with the 6-speed DSG auto. Now, thanks to a bit of a crunch with the amount of people on the press drive, it was a bit hard to get impressions on both, so this review will focus on the petrol manual only. The one we got was the base Style trim that is a bit down on features compared to the full-fat L&K variant, but the way it moves will make you forget about any perceived shortcomings. What you need to keep in mind are the following numbers: 177 bhp and 32.6 kgm fed to the front wheels, while the automatic gearbox-equipped TSI produces the same power and a slightly lower amount of torque (25.4 kgm). What you now need to do is forget about those numbers because it has absolutely no bearing on the way the Superb drives. Yes, they’re ample figures for a premium sedan that weighs slightly less than 1.5 tonnes, but the Superb lulls you into a sense of utter serenity with the way it goes about things. Our drive in Coorg took us through some long highway stretches, ridiculously twisty ghat roads and even a road that questioned the very existence of the word ‘Smooth’. The Superb did its bit, keeping us happy and engaged, and in case you’re of the opinion that we took it easy right through, you’d be as wrong as the blokes who felt that the world would be razed to, well, absolute nothing-ness by 2012. The way the 1.8 TSI responds to your inputs when you’re attempting silly speeds is nothing short of inspiring. You show it an arrow-straight stretch to stretch its legs and it will oblige in a way much like a Labrador would if you chucked a frisbee in the air. Show it a wrecked road and it will shrug off most, if not all, irregularities. Show it a few corners and it will, well, okay, it’ll understeer a bit when you’re pushing hard, but how much can you expect of a front wheel-driven effort with the amount of power it’s putting out? It’s honestly a bloody well put-together car, the Superb. Have one go in it and you’ll have a better understanding of what I’m saying.

It’s really a no-brainer, then, isn’t it? I believe so, especially once you factor in Skoda’s prices for the Superb. They start at Rs 22.6 lakh for the one you see on these pages, stretching to  Rs 29.37 lakh for the 2.0-litre diesel with the auto ‘box in the L&K trim. Brilliant, right? The only place Skoda’s stuttering a bit is when it comes to spares and service, which isn’t quite up to the mark yet. There is, of course, the faith that Skoda will pick things up in the months to come because it’s been promising just that, so that shouldn’t be a deterrent, either. This is it, then. This is a prime example of when the pursuit of perfection ends. Hats off, Skoda! Now where’s that long-termer?