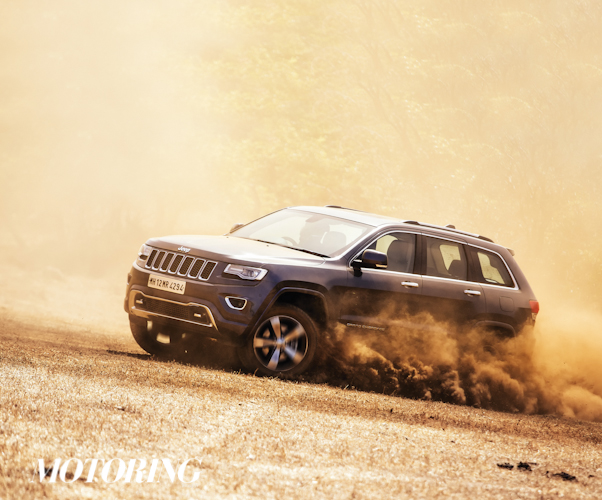 What do you think? Can it?’ Skepticism was in no short supply, clearly, as we inched our way forward to the monstrosity of a ditch that would give us access to a playground filled with bonsai meteors and plenty of opportunities to get the car to do rather silly sideways things. To be honest, the scepticism was short-lived and had no basis. I could almost hear the Grand Cherokee telling me to ‘Get a move on, already, you novice,’ as I cringed at the inevitable sound of the underbelly getting intimate with the ground. That sound never came, though, and like I said, my hesitancy had no basis. Leaves you feeling rather stupid, let me tell you, when you undermine the capability of a machine like this one.

What are we in? Allow me to explain that bit a little better. Fiat’s finally making good on its promise of bringing the rather brilliant Jeep brand to India and the first one of its SUVs we’ve had a chance to sample is the Grand Cherokee, the full-fat premium SUV that wants to do the job of dropping your kids off to school as well as mucking around in the, well, muck. If it were a fair world, the Grand Cherokee would be the answer to those who look at the BMW X5 and the Mercedes-Benz GLE and go, ‘Meh’. It’s not, though, so our country’s fantastic duty structure will make the Jeeps rather expensive thanks to the fact that they’ll be brought in via the CBU route, opening it up to competition from a segment or two higher. That isn’t fair, really, because the Grand Cherokee is a good SUV with so much potential.

For one, it’s a road-hogging bruiser that looks pretty good. I do admit to admiring those wonderfully detailed Chrysler 300-inspired lights and at the same time I had a bit of a hard time digesting the fact that it looks disturbingly similar to a Fortuner from the back. The cabin’s another sore point that needs a bit of sprucing up, especially that centre console. The entire layout just looks staid and the touchscreen is a bit of a mess when it comes to the user interface and, I’m sorry, but that driver’s side footwell just doesn’t have space to accommodate your left foot when it’s left with nothing to do (perforce left-foot braking, maybe?). Sounds like I’m being picky? Like bemoaning the fact that Huggy Bear isn’t sexy enough? Could be.

Let me, then, focus on the good bits, starting off with the 3.0-litre V6 diesel. The good bit is that it is very handy when you’re going off-roading because there’s an ample amount of torque (58 kgm) to get you out of the stickiest sections your incompetent behind can get you into. All the power is fed to the wheels via an 8-speed auto ‘box that gets four modes: Snow, Sand, Mud, and Rock. There’s also an Auto mode that’ll do the guesswork for you and a low ratio to help things along. From whatever little off-roading we managed, it seemed like the Grand Cherokee was born to do this. Very little perplexed it and I’m sure I’d have needed a set of four more tyres had I gone on any longer through the mud and ruts that littered our location. Of course, there’s also a limited-slip rear differential that helps things along when you’ve managed to bin one of the wheels into a tricky position. The massive 265-section Hankook tyres all around afford a ridiculous amount of traction and there’s even a full-sized spare in the boot. What maybe could have helped is having an adjustable ride height, but not having that isn’t really a sore point. In this writer’s opinion, then, it’s one heck of a capable off-roader and as you can see in the pictures, it just looks that much better when it’s been slathered with mud from top to bottom.

That’s not the bit that surprised me, though — it is a Jeep, after all. What surprised me was how well it adapted itself to on-road driving, too. I mean, sure, the Grand Cherokee makes sure you know exactly how much weight you’re shifting at all times while on the move, especially when you’re pushing it hard down an empty expressway. At no point, though, does it feel lethargic and unmanageable — quite the opposite, in fact. It’s friendly enough if you know its limits and that’s what makes it so agreeable. I do have to point out one thing at this point, though: that A-pillar is the mother of all obstructions while driving. Consider hiring a spotter just to help you take turns. Other than that, though, you won’t be left wanting in terms of power and when you slot it into Sport mode, the SUV defies logic and really begins to get a move on. Seriously, it’s really quite impressive. You even get an enormous 93.5-litre fuel tank that’s good enough, if my math is right, to get you to, say, one corner of Pune, if you start from the exact opposite corner of Pune. Okay, so the Cherokee’s got a bit of a drinking problem, but that’s expected, isn’t it?

It all boils down to the price which, like I mentioned earlier, isn’t going to be easy reading. Would you consider it over an X5 or a GLE? Very few would, if I’m honest, but you can’t get away from the fact that the Grand Cherokee is an extremely capable tool. If I were to take a stab at the price, I’m assuming it’d be north of ` 75 lakh and that’s a lot of money for the kind of car it is. What’s the point, then? Forget about the price for a moment. I think this represents a very good start for Jeep in India and if it can capitalise on the whole off-roading craze and spin up some goodwill for it, and at the same time work on localising content, things can only look up for the brand. It’s not an impossible ask and I’m sure that Fiat has some plans in store for Jeep in India. Until then, how about we at Motoring World drum up some business for the bonkers 6.4-litre Hemi V8-equipped SRT version of the Grand Cherokee by driving around in it for an entire year? What say, Fiat? Care to plug a few dreams?