Any car that leaves shelves to the tune of 3 lakh units in just over three years since launch is doing something right. The Venue is a hugely popular car and makes up the lion’s share of Hyundai’s SUV sales numbers — and the Korean firm has just given it its first update. Let’s waste no time and dive right in (and keep in mind that this article deals with the fully-loaded turbo-petrol variant; base-spec variants have less features). 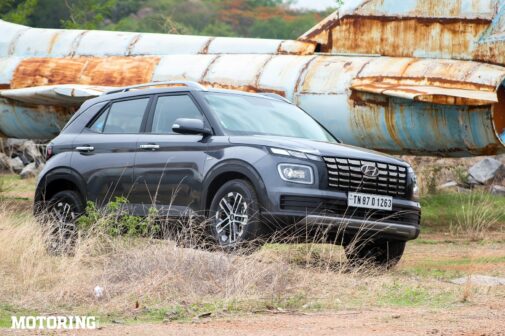 The older Venue was (and still is) a pleasant-looking car, no more and no less. It’s well-rounded, neat, uncontroversial and was the precursor to the kind of exterior design we see on the current Creta. The 2022 model changes that up significantly, aligning with the design language that can be seen on the new Tucson. From the front, the chunky new grille is the first thing you’ll notice, along with the sleeker, 3-part DRLs/indicators which (almost) integrate with the grille, which is now rectangular. The LED projector headlights haven’t changed that much in shape, and fill up the spaces under the DRLs nicely. There are no fog lamps — instead, a large, slatted strip sits between the grille and the skid plate, and personally I quite like this look. The character lines on the bonnet remain the same as before. 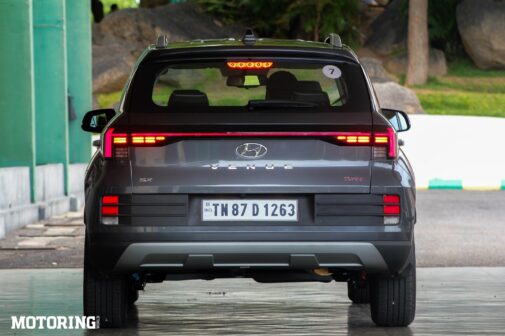 The car’s profile hasn’t changed dramatically. The 16-inch alloy wheels have a sleeker design now, and the roof rails and shark-fin antenna lend a touch of sportiness; the chrome door handles look good as well. It’s when you get to the rear that the most prominent changes become apparent. There’s now a set of all-LED tail lights connected by a lit-up strip, rather like the VW Taigun. Below it, a slatted strip matching the one in front completes the rear. This Venue may polarise opinion a little more on the design front, but it definitely has more road presence than the previous car. 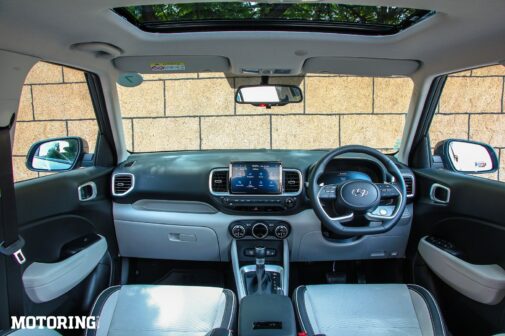 Hyundai usually goes all in when it comes to the cabins of its cars, and this one is no different. It hasn’t changed in terms of size, but it does look more premium now, and the black/grey (or ‘greige’) colour scheme goes a way towards achieving that, as do the silver accents on the door handles, and A/C vents. The seats are very comfortable and supportive, and the top-spec models get a 4-way powered driver’s seat; at the back, you get a 2-step reclining seat back, which is very useful. More knee room for the rear passengers has been created by scooping out the backs of the front seats, so two adults at the back will be more than happy; a third will fit, but you’d be best off with four passengers in all. 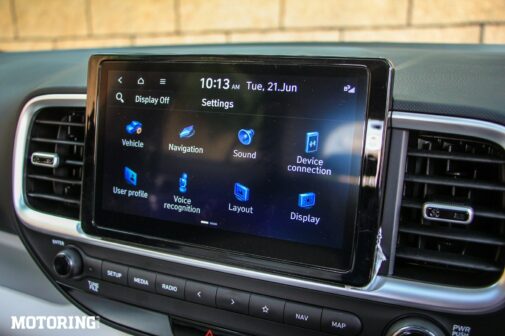 As is Hyundai’s wont, the list of standard features (in top spec models) is exhaustive. There’s a new 8-inch touchscreen infotainment system with 10 Indian languages as well as Korean and English; climate control with digital display; a digital instrument cluster; a sunroof; ambient lighting; the ability to play ambient sounds (the forest, the sea, rain etc); an air purifier; a cooled glovebox; voice commands that work without internet connectivity; Alexa and Google Voice Assistant capability; a TPMS; cruise control; wireless Android Auto and Apple CarPlay; wireless smartphone charging; USB-C charging points; a reversing camera; steering-mounted controls; paddle shifters; updated Bluelink with more than 60 functions and several more – the list is too long to, well, list here. Suffice to say that your every connectivity and feature need will be catered to; if you think they won’t, you’re probably shopping in the wrong aisle. Oh, and I truly appreciate the fact that Hyundai has retained dials for the A/C controls, so you don’t have to fiddle about on a touchscreen for them. Safety features on the higher spec models are excellent as well – 6 airbags, vehicle stability management, hill assist, ABS with EBD and ESC. 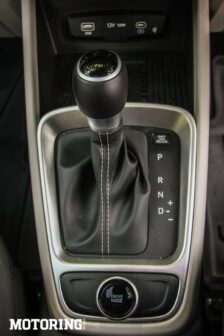 Nothing has changed under the Venue’s hood, which means that you can still choose between a 1.2-litre NA petrol, a 1-litre turbo petrol and a 1.5-litre diesel; the base petrol comes with a 5-speed manual, the turbo petrol with either a 6-speed iMT or a 7-speed DCT (2nd gen) and the diesel with a 6-speed manual. The car I had during the media drive in Hyderabad was the turbo petrol, and it’s the pick of the lot as far as driving entertainment is concerned (as it’s always been); the 1.2-litre will suffice for most buyers and the diesel is for those who want to stretch every litre of fuel to the last drop. 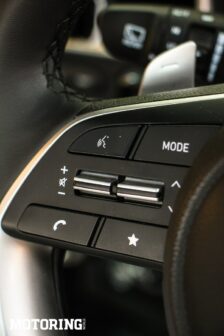 The 2022 Venue has a drive selector dial below the gear lever, and there are three modes on offer — Eco, Normal and Sport. They do as advertised, with throttle response becoming quicker as you scroll through them, and the instruments changing colour to indicate the modes. Eco is best left for crawling along in traffic, Normal will see you through 90 per cent of driving conditions and Sport is for when you want to spank the Venue a bit and get it to stretch its legs — which it’s happy to do. The 2nd generation DCT feels smoother and quicker-shifting now, and using the paddle shifters is a surprising amount of fun when you’re pushing the car hard. The car’s ride and handling characteristics are on the ball, with hard cornering possible with minimal roll and without upsetting the Venue’s balance; it’s also absolutely planted in a straight line and during lane change manoeuvres. Its ride quality was exceptionally good on the admittedly exceptional roads near Hyderabad’s airport, but anyone with experience of the older car will know that it soaks up all but the biggest bumps confidently. 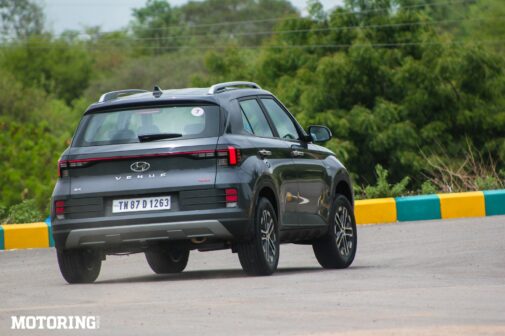 The refreshed Venue is a very nice car made much nicer, all told. Hyundai has sharpened it up, made it look and feel more aspirational and stuffed it with every imaginable feature a buyer could want; at prices ranging from Rs 7.53 lakh to Rs 12.72 lakh (ex-showroom Delhi), there’s also a variant for every pocket. With SUVs still very much the flavour of the day in our market, I wouldn’t be surprised to see the 2022 Venue begin to make up even more of Hyundai’s sales figures than it already does.