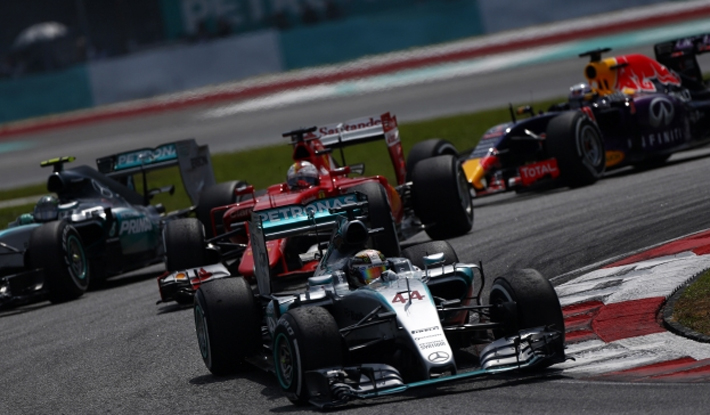 Looks like Sebastian Vettel hasn’t said goodbye to his winning ways after all. Neither has Scuderia Ferrari, it would appear, as the man-machine duo got the team it’s first F1 victory in 35 races. Two races into his stint with the racing juggernaut, Vettel has come out victorious, thanks largely to the use of excellent tyre strategy and the improvements made to the 2015 car.

At the beginning it was Lewis Hamilton who stayed in the lead while Vettel rebuffed the advances of Nico Rosberg, keeping him in third. However, things changed once Marcus Ericsson’s spin prompted the safety car to come out, which in turn prompted the Mercedes drivers to pit. However, hoping to benefit from a clear track Sebastian Vettel stuck with the option tyres which eventually allowed him to gain a 10 second lead over Hamilton. Vettel’s two-stop strategy finally trumped the three stops made by the Mercedes drivers who had to fight their way back from the bottom of the top ten.

Lewis Hamilton didn’t spare his crew members while distributing the blame on tyre strategy and radio chatter that spilled into his earpiece towards the end of the race, distracting him. Fact remains that both Lewis and Nico were unable to outpace the Ferrari, even after they climbed up to second and third, respectively. This is largely due to the enormous gap between Vettel and Lewis and partly due to the fact that Ferrari really seem to have brought their ‘A’ game to the table this season