I could start my farewell to the Volkswagen Polo — the end of production has already been announced — with a cliched ‘Parting is such sweet sorrow,’ or ‘It’s so hard to say goodbye.’ However, I’m not going to be morose because I happen to own one, something I tend to bring up with such frequency that I get yelled at. Volkswagen India and Volkswagen Motorsport India did (justifiably) want to celebrate 12 years of the Polo, and the end of production, with a bit of fanfare — a track day with race-prepped and stock Polos, and even a Taigun or two. 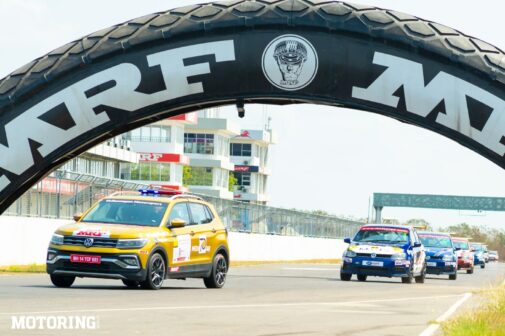 It was my first time at the track, and that was just one reason for how excited I was, the other being driving a stripped-down and mechanically enhanced Polo. Used in Volkswagen’s one-make Polo Cup series, this version of the hatchback uses nearly all the same body panels as the standard car, but features a menacing, low-slung stance, thanks in part to the forged multi-spoke wheels wrapped in MRF racing tyres, and the functional, oversized spoiler bolted on the roof. Internally cackling with glee, I couldn’t wait for the briefing to get done before I stepped into one.

Briefing done — no overtaking on the first few laps, don’t do anything stupid etc — I looked for a car (and a helmet) that fit my portly frame, because the driver’s seat didn’t have an adjust feature, though the steering did. After climbing in over the rollcage and getting very firmly strapped into the five-point harness, I waited. VW Motorsport has taken nearly everything out of the Polo to save weight. There’s just a half-cut dashboard, various buttons where an infotainment system and AC controls would be, a sporty steering with paddle shifters, a race display, three pedals and a fire extinguisher.

It was too bad that the temperature at the track was over 40 degrees, the engine was running pretty hot, and that there was no insulation to speak of. I started overheating, almost dissolving into a pool of sweat (and feeling claustrophobic), so I un-harnessed myself and stepped out. ‘Damn, it gets hot in there. I’ll need to crack open a window and keep moving otherwise….’ I thought to myself. A few minutes later, I got the go-ahead to get re-strapped in.

It wasn’t difficult to get the Polo started — press the blue button, hit ignition, clutch in, and then hit start. Setting off was. Switching to first, that mechanical clunk of the shift was exhilarating, but then I stalled the car – twice. I’m not used to the ultra light flywheel used on the Cup car, but an adequate dose of the go pedal solved that. As I set off out of the pit lane, following two other race cars and the modded VW Taigun safety car (used in the one-make series), that little bit of breeze wafting in from the window was heaven-sent. The first two laps helped me get a feel for the track, and then we upped the pace, considerably.

I loved the unencumbered shriek of the Polo Cup car’s 1.8-litre turbo-petrol engine at the redline, and I could feel every one of those 207 horses hurling me forward. I was told that even with my weight, the car’s gross weight wouldn’t exceed 1225 kg, which meant this thing was fast. And it was capable of stopping on a dime, too. I thought to follow the braking markers before some corners a little too strictly, and realised I didn’t need to take things so slow. 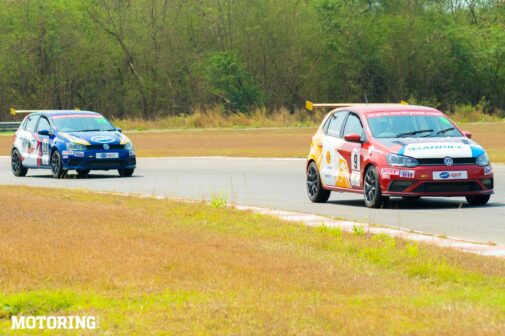 I always knew my Polo’s PQ25 chassis was pretty taut, but the rollcage and whatever VW Motorsport has done to the suspension made cornering an absolute blast. I carried more and more speed in, braking later and later. And then, as would happen if you follow the logical progression of these things, I pushed too hard on the last corner of the track and found myself on the grass. The car had understeered, and I missed the apex, which meant that I lost my place in the column of cars pushing hard, but I did manage to get back on with relative ease, and on to the start-finish straight. 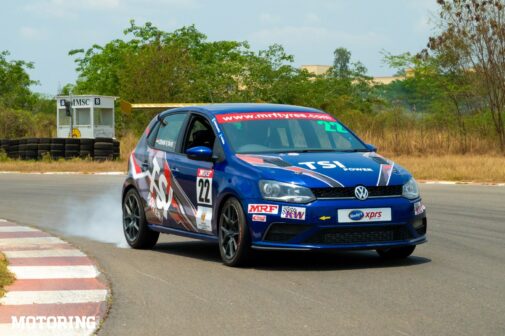 We then got the opportunity to drive a bog-standard Polo TSI (or GT TSI) on the track, and that was a whole lot of fun in its own right. I came to realise just how focussed the Polo Cup car is when I was trying to pull off a handbrake-assisted drift. It was impossible to get the rear unstuck, something that the standard car pulls off with ease. In fact, the overall impression (right before the understeer sets in) is of driving on rails. 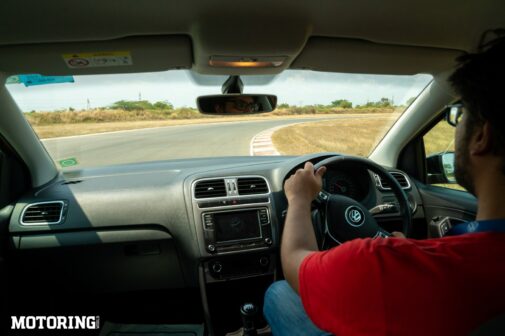 That isn’t to say the standard Polo isn’t fun around the MMRT. It may be made for the road, but, as always, VW’s hatchback is an entertaining drive, with its punchy 108-bhp 1.0-litre turbo-petrol engine, well-sorted suspension and, in the case of the manual, the slick 6-speed gearbox. The 6-speed torque convertor automatic in the GT TSI fails to excite as much, as it saps a bit of power overall, but it’s still enjoyable in manual mode. 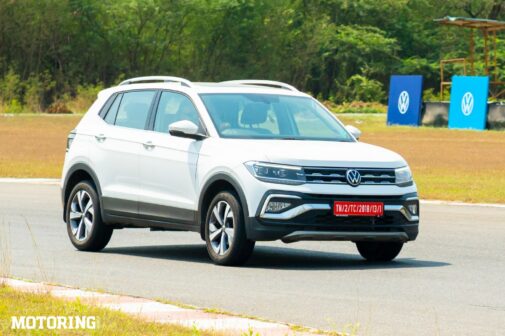 What took me by some surprise was how the standard Taigun handled on track. The turbo-petrol engines, both the 1.0-litre and 1.5-litre, had more than enough grunt, and the chassis felt nothing short of brilliantly stiff. Even the suspension dealt with everything the track could throw at it quite well, with the only chink being the tyres. They squealed and gave out rather early. This is why I take it as sad news that Volkswagen will be retiring the Polo nameplate for the near future. 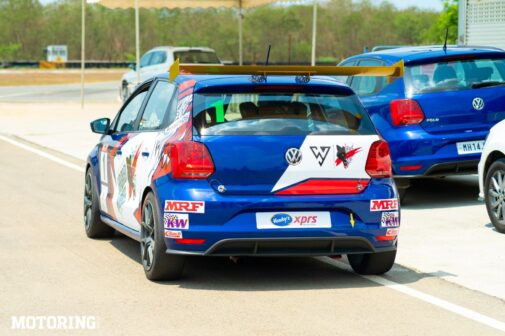 The brand is, for now, focussing on a new range of SUVs and sedans that’ll be built on the heavily localised (and superb) MQB-A0-IN platform, and that, in my book, is a shame. The next-gen Polo could be based on the same platform, and could even have the same powertrains as the Taigun and Virtus (including that delicious 148-bhp 1.5-litre turbo-petrol), but none of it will materialise. At least not for a while. I guess it’s not so much sayonara sister, but more of a later alligator. I hope I don’t wait too long.