Unshakeable. It’s an oft-used, highly-misused term that tends to lose a lot of meaning, especially if you border on the brighter side of cynicism. The last time I checked, it was also used for man-made technologies or mechanical items that tend to have a longer run than expected. On top of that heap is the Porsche 911. 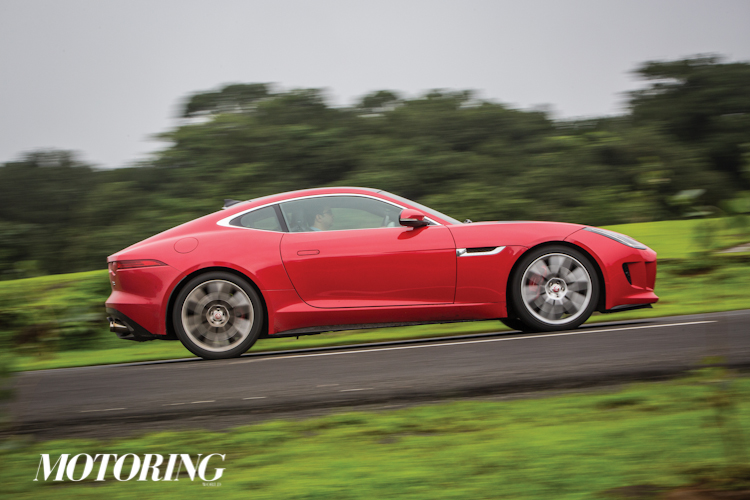 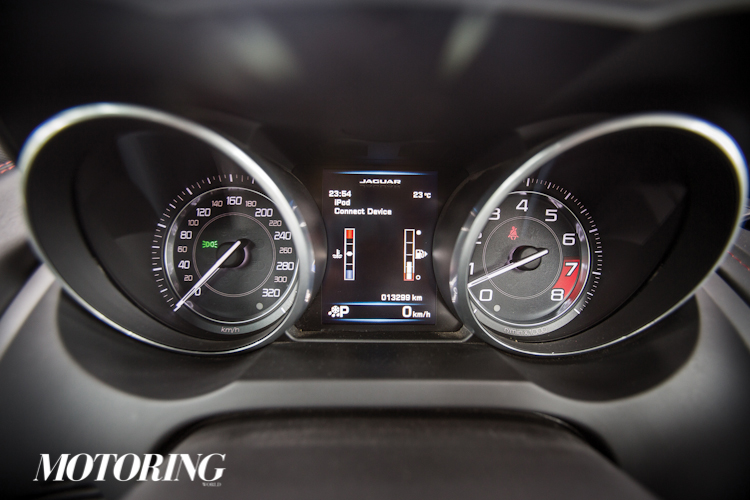 Many have laid their sights firmly on this once ‘pumped-up VW Beetle’, but generally ended up finding themselves in its shadows after their 15 minutes of fame were up. In recent times, Jaguar has made an attempt at getting even with the Porker with its new F-Type. You see, it’s been nearly a decade in the making, before being fast-forwarded when Ratan Tata decided to grab JLR from under the nose of many and then greenlighted the project soon after Ford picked up the cheque and headed back to Detroit. It came back just as the doctor ordered; a brute British bruiser with more than a bone to pick and an exhaust note that would probably make even the holy one sign off his wealth.

You might think that bringing along the biggest V8 R to take on the 911 Targa 4S is unfair. After all, the V8 R has far more power and that negates everything. Everything except that this is no ordinary Targa 4S, but one that comes with a 30 hp pack, essentially making this a Targa GTS. Plus at the time of doing this story, the weather was inclement, the road surface damp as a Scotch Brite after cleaning up a restaurant kitchen sink, so the all-wheel drive on the 4S evens things out.

Besides, were we to bring a 911 Turbo S into the picture with the exact horsepower as the V8 R, it would have walked away rather easily with the big prize home. Of course, we also can’t help if press fleets never end up with cars that are a perfect match for each other. Sometimes we really wish we were flies on the wall when they get specced in bored-rooms where people endlessly keep staring at that plate of biscuits. The moot point is this: a 424-bhp 911 is just as potent as a 543-bhp F-Type in trying conditions. There is a story still to be told. Let’s then get on with business, shall we? 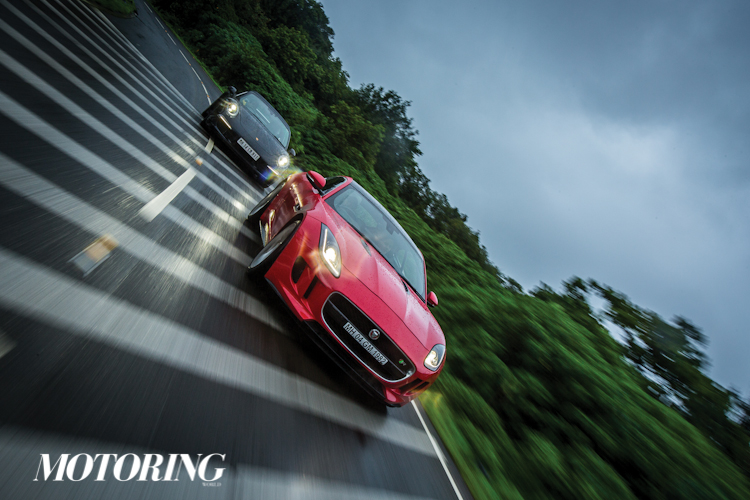 The Targa in black with those silver accents is a stunner. It draws heads like moths circling a flame… until the F-Type walks into the bar. After that, the Targa only manages to keep some interest alive because, make no mistake, the F-Type is probably the best-looking sportscar in years. Ian Callum and his magnificent team have created a design that is rather timeless, something like the 911. But the thought and design is pure, borrowing high points from the past and pointing a compass at the future. This round, then, goes to Castle Bromwich.

The 911 has always been a master of packaging courtesy the motor that rests on the rear axle. That has meant more room to shove in two annoying kids and their toys behind the front seats. No such luck for the F-Type and probably with reason, too. Jaguar had to make room for the large V8 ahead of the firewall, which meant a long nose and a tighter cabin. At first, it doesn’t seem too bad, once you’ve parked your rear on that driver’s seat. However, spend some moments after you’ve buckled up and you start to feel a bit hemmed in. The dashboard is too high, the steering is too thick rimmed and everything is just too close for comfort.

With the 911, though, the sense of airiness is a bit heightened. The window sill is a touch lower, the steering rim is just of the perfect width and the overall visibility from the captain’s deck is simply brilliant for a sportscar. I also have to admit that it’s better built, too. The touch and feel of most surfaces mimics that of the best known materials that most of us encounter. Aluminium for the centre console, for the paddle-shifters and the general high-quality leather and stitching — you will struggle to find fault with it.

The F-Type, on its own, isn’t badly built, though. It’s got a nice mix of surfaces and textures and the leather is of a high quality, too. Problem is, it’s also got some low-rent plastics. The steering wheel, for example, is borrowed straight off the XJ. It’s too thick and doesn’t have that ‘dripping quality’ feel of the 911. The paddle-shifters are of this pseudo plasticky-rubber material that somehow doesn’t feel nice to touch. I wish the power-window switches weren’t so plain, either. The little things that mar an otherwise decent cabin. Zuffenhausen wrests round two. It’s all even stevens so far. 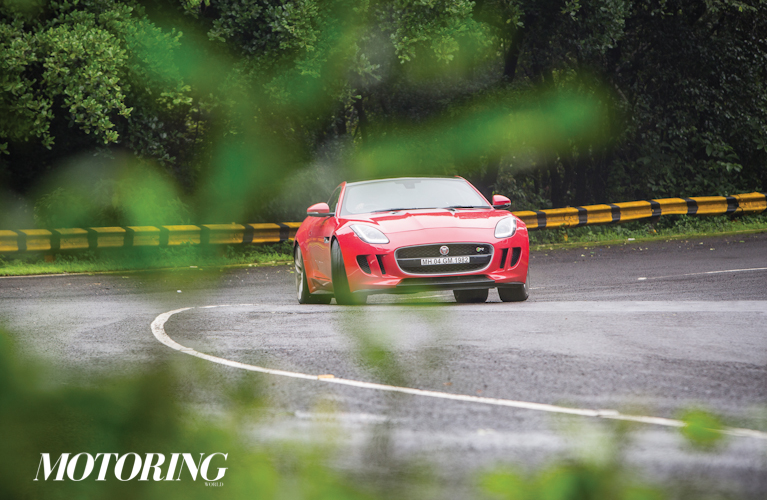 The Targa with its Carrera S powerkit is still no match for the F-Type’s raw, chest-thumping 543-bhp/70-kgm motor. Still, the 0-100 kph times on Indian roads in the wet aren’t too different; 4.3 secs for the Jag vs 4.74 secs for the Porsche. Even if you delete the all-wheel-drive system, the increase would probably be to the tune of a tenth or two. So how does a car with a 60 bhp/tonne power-to-weight benefit and with significantly more power and torque not manage to shake the 911 off its rear-view mirror?

The answer lies in two parts: first, the construction. The 1575-kg Targa is made of part-aluminium/part-steel. The F-Type, despite its more expensive aluminium construction, weighs 1650 kg. Remove all-wheel drive and Targa top from the equation and the 911 drops to just under 1500 kg. The second part of the answer is frictional losses. The PDK ‘box, combined with drive-shafts and electronics, manages to make nearly every hp count, ensuring the 911 always punches way above its weight. But how does all that performance feel from behind the wheel?

You can’t fault the F-Type for theatrics. With the sports exhaust switch lit, it becomes the kind of ‘laugh a minute’ car that eggs you on for more. The 8-speed box is pretty quick, too — it’s just that it lacks that extra crisp shifts of the 911’s PDK. But if you call in the services of the dynamic mode and launch control, the F-Type can be more than a bit notorious. Its behaviour changes to that of a street ruffian with a small knife in its back pocket and a steely gaze. Let go of the brake after launch control is lit and the tail steps out, the nose expands the front springs and settles only after you’ve hit second gear. Because you are seated so further back in the car, every ounce of the car’s behaviour is transmitted through your hindside. With the motor whizzing, popping and crackling not just on the overrun but even otherwise, it’s also probably the only car that’s as much fun getting off throttle from peak revs as on it.

The 911’s boxer motor sounds more subdued. With the sports exhaust, it gains a slightly more metallic edge, but on the decibel counter it loses to the F-Type. Honestly, though the thrum of the flat-six is a case of alchemy. How Porsche manages to tune the motor to sound so good is a mystery, because at full chat the 911 sounds angrier and hungrier. In the S, it’s also prone to let its tail step out a bit when everything is switched off; in the 4S you simply apply more brute force. So in round three, the Porsche manages to just win by a teeny-weeny bit. A whisker, if you please. 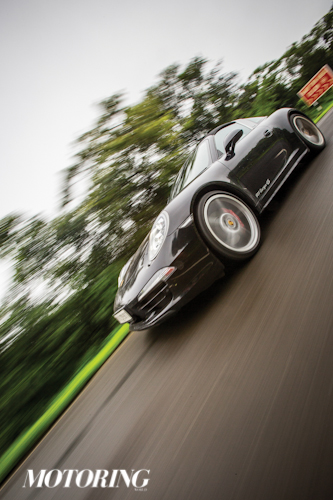 STEER WITH A SMILE

The 4S means more traction. More traction means more predictable on-limit behaviour and a more resolved dynamic package. All of which rings true. The Porsche’s ability to hunker down and attack corners with very little to no understeer and stick to a clean line through and through, defies physics. There’s so much traction on hand that to unsettle it you need to probably apply some motor oil on those PZeros or Michellins. What doesn’t work? Well, the steering is a bit numb and lifeless. Accurate, yes, but not oozing with feedback.

No such issue with the F-Type where the steering not only has a better heft to it, it’s also got more feel. It’s a case of hydraulic versus electric and hydraulic wins as usual. It even rides slightly better than the Porsche on Indian surfaces, with a bit more pliancy even on rebound. It’s a tradeoff, because around a corner, even when compared to a Carrera S, the F-Type simply lacks the kind of grip that the 911 offers, mechanical or related to rubber. The F-Type feels a bit loose around decreasing-radius turns and is upset by bumps around corners, a common occurrence on our roads.

On cambered sections, the torque steer in lower gear tends to pull the car away from its intended line. It’s not by much, but when you have spent time in a 911, you can feel the difference. The only solace is that because you are sat mostly over the rear axle, your backside works like an antenna to every single input you dial in and the response that the car offers in return. This also helps, given that the F-Type is particularly tail-happy! Drifts are easier to come by, but the over-sensitive throttle means you tend to immediately correct any drift, lest you plaster yourself and the car into a hedge. Thus, the Porsche takes the lead here, too. 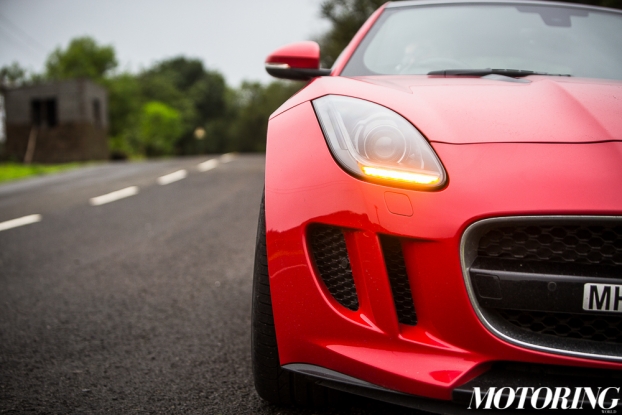 Come Frankfurt Motor Show time, i.e. by the time you are by your bedside reading this copy, an updated 911 will come along, but with a rider so strong that it’s probably going to rile up all Porschephilles for decades to come. The biggest controversial change since going water-cooled with the 996 is about to take shape; the standard 911 will be going turbo. Yes, you read that right. And, in a double whammy of sorts, it’ll duck the 3.0-litre mark, in order to please its biggest market, China. You see, the Chinese tax any car over 3.0-litres heavily — and we Indians need to homologate anything under that figure. Zuffenhausen has never had it so complicated.

The final outcome, though, is this — the Porsche still wins. It’s the last of the naturally-aspirated, regular Porsches we’ll ever experience, though the GT models will continue without turbocharging. What the 911 does is provide a more complete experience that the F-Type nearly manages but falls short of. Jaguar has done a splendid job of creating a car that’s more entertaining than an entire amusement park and one that looks so spectacular that the competition can’t match up to. But once your 15 minutes of fun are up and you want to go on that long drive, the Porsche 911 simply provides more thrills with greater consistency, quality and deft. It continues to stay unshakeable. 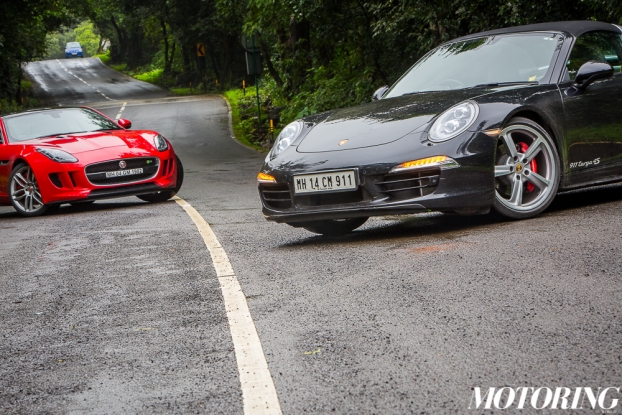 [This story originally appeared in our September 2015 issue]