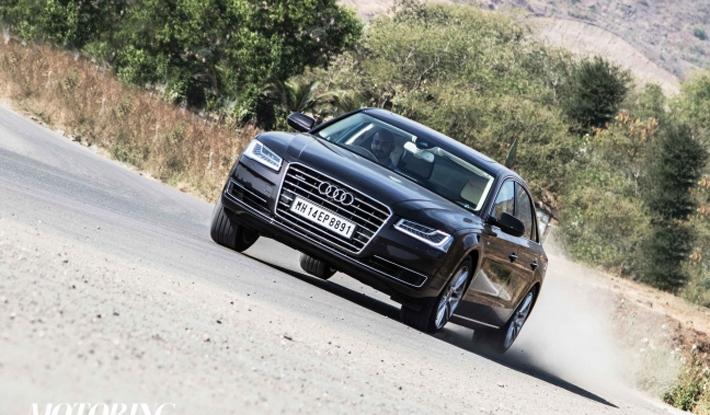 The sharp left was a little tricky. I’d need to be slow enough for the car to not spill over onto the curb and make a mess of itself, but fast enough to not get our snapper all crabby again. The entry was littered with gravel, the exit, thanks to being blind, could very well be littered with humans and dogs. The car in question was the Audi A8 60 TDI, which, if you’re confused, is an A8 with a 4.2-litre V8 turbodiesel. And what a car it is. I had a go in the 3.0-litre diesel variant a while back when it had just made its debut in India, and suffice it to say that it blew my mind. It’s the quintessential car in my mind – it’s wicked-looking, if a little squarish from certain angles, it’s massively loaded with creature comforts that’ll keep you busy for days on end, it’s got a lovely set of engines powering it, it’s got quattro, and it’s supremely, obscenely opulent on the inside. I should probably have started off by admitting my bias towards this car, eh?

Getting back to the point – the bit about tackling that corner. I don’t know why I was worried. If my rather blatant praise for the A8 wasn’t obvious enough already, here’s another compliment for it – it managed the corner with superlative ease. Swift turn in, sublime poise during the turn itself, power out at speeds that startled our snapper, and done. Piece of cake. The A8’s got a knack for having just the right amount of steering feel, the 8-speed gearbox is spot on with its shifts, and the engine is brutal. No two ways about it. There’s a surfeit of mid-range torque that gives you a delightful push back into the seat even at part-throttle, and the car in Dynamic mode is explosive to say the least. It can and will scare you silly with its swiftness, this A8.

Speaking of swiftness, though, the other car lined up for this little comparison is none other than the Mercedes-Benz S-Class in the 4663cc petrol guise. If, right about now, you’re going, ‘A diesel car versus a petrol? What on Earth are you smoking?’ I assure you we’re perfectly sober. Well, mostly. Up until this test, I hadn’t driven the new S, and boy was I in for a treat. You need to reassess your standpoint on luxury before you get into the car. It’s a different world in here, what with all the genuine leather and smoothened out edges and neat little touches that make you feel like a true gentleman. It makes you want to live in it, and given the extensive features list, I’m surprised it doesn’t come with a gold-plated water closet built in.

But I digress, so here’s the rub: the S500 is a different beast to the A8 60 TDI in the way the power’s put down. Where the A8 excels in the mid-range, the S500’s top end is where you want to be. Not that the bits before the rev-limit are cumbersome, it’s just that the engine’s the liveliest there. It’s a shame we couldn’t exploit that bit of the rev range for too long considering the little time we had the car with us, but I assume it would love being there all day, and more. It’s not a bad corner carver, either. Have it barrel through one and you’re sure to respect the S500 all that more. Body roll is well controlled, the 245 section tyres grip admirably well, and the steering sends back a delightful and reassuring amount of feedback so you know just what the tyres are upto. For a super luxury limo, there’s really not much you can fault with it.

That is precisely my problem with these two cars. They play their dual roles of being chauffeurs to the rich and elite as well as they manage to be fun-to-drive cars. How is one supposed to pick a winner, really? First-world problems, I tell you. It’s a different matter that cars like these will actually never be used for the kind of shenanigans we were pulling, but I’ll answer a question that wasn’t really being asked in the first place: the A8 is ever-so-slightly, and I mean a hair’s breadth, ahead of the S500 in the fun-to-drive stakes. Take a bow, Audi.

Editor’s Note: The story first appeared in the February 2015, Fun-To-Drive Special Issue of Motoring World. The cars were compared on a single parameter, i.e. their Fun-To-Drive quotient.