The year 2020 will be remembered for several reasons, almost all of them unpleasant ones — but it is also where this journey begins. After being cooped up for almost 10 months, it was only natural that we had an itch to get out there — anywhere, really. Since travel is now possible, we decided that a trip to the mountains was just the ticket, for some solitude (of the pleasant kind), fresh air and gorgeous views. However, there’s still a pandemic on, so we decided to take the safe approach, to keep us and everyone we encountered on our journey secure. 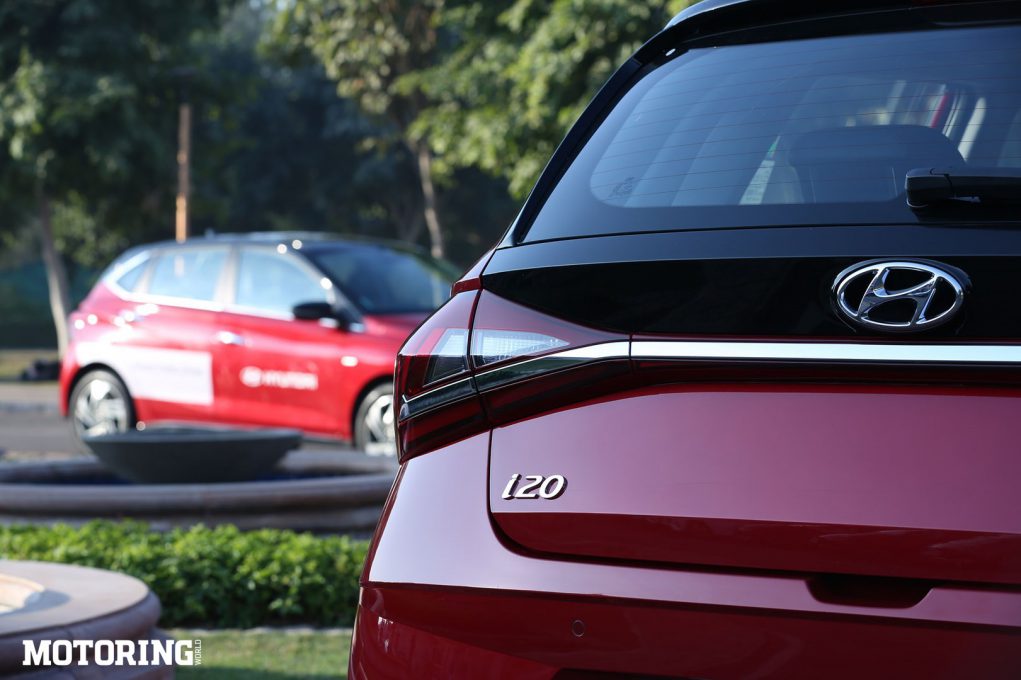 Our first day began with a flag off from ITC Grand Bharat, on the outskirts of Delhi NCR. As for our car, it’s amazing to see how far Hyundai has come with the all-new i20 was to be our companion on the journey, a part Hyundai’s Great India Drive initiative, which is held every year. Our destination was the mountain town of Munsiyari, in Uttarakhand, with stops along the way. 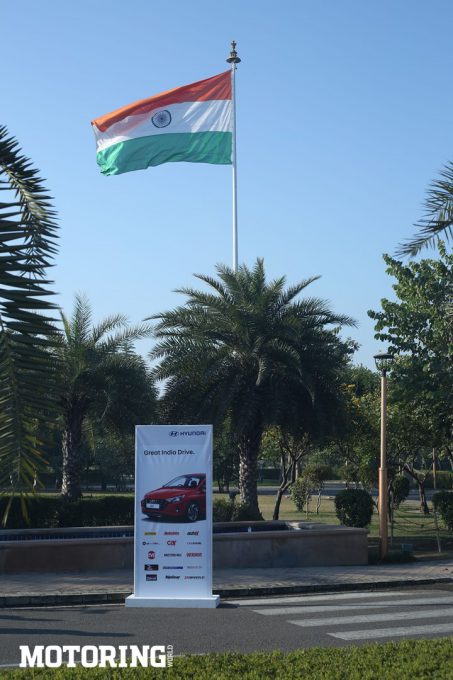 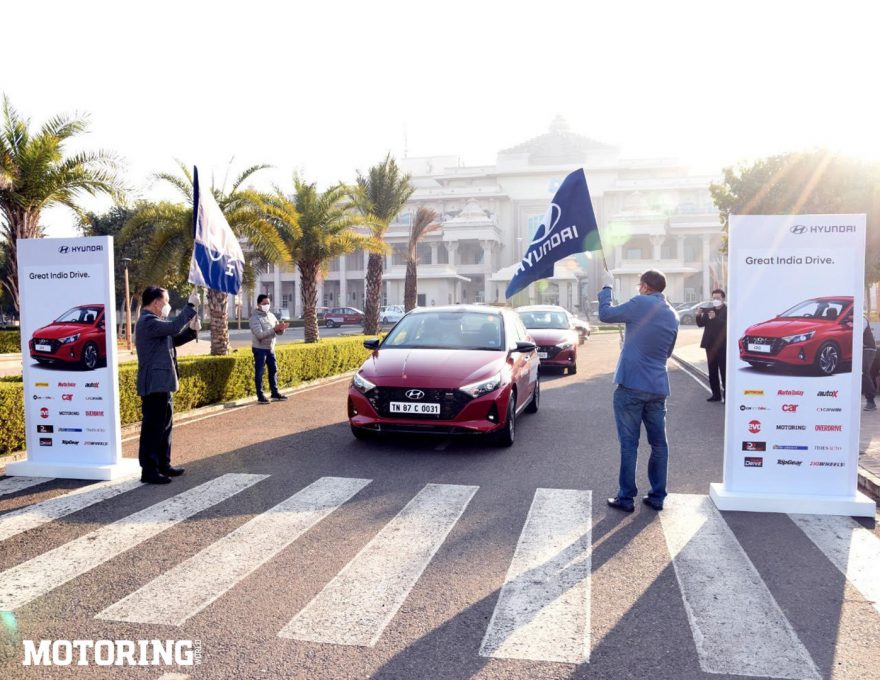 Since we had the 1.0-litre Turbo GDI version with us (it packs a punch), the plains through most of Uttar Pradesh were a breeze. We had left at around 10 a.m., so we aimed to reach Nainital by nightfall. To waste as little time as possible, we decided to stay a little towards the outskirts of Nainital, to avoid the city traffic while heading out the following morning. After encountering a healthy dose of fog along the highway, we finally reached our hotel at around 8 pm. Although we got only a little glimpse of the all-new i20’s handling on the hill roads (driving in the dark has to be done responsibly, after all), Hyundai’s latest had impressed us greatly with its assured highway manners.

As our tired but eager eyes opened the following morning, there was a renewed sense of enthusiasm. Our hotel had a lovely view of the winding roads below, and we were eager to get out there and tango with them. After departing early in the morning, we made our way to the quaint little town of Jhaltola. Our destination — the Misty Mountains homestay. Travelling time in the hills almost doubles, and in some cases even triples depending on the state and size of the tarmac, but we soldiered on. A thick cover of forests and centuries-old trees began to enter the scenery, slowly but surely. As we ventured higher, there was a sense of silence which cannot quite be explained. Those ancient rock faces and trees have a way of humbling any human being, no matter how big or small.

As for our car, it’s amazing to see how far Hyundai has come with the all-new i20. It’s spacious, handles like a dream and comes with a whole host of engine and gearbox options — we had the combination of the turbo-petrol and iMT gearbox. That’s an Intelligent Manual Transmission to you, but to us, it is a thoughtful attempt to cater to someone looking to enjoy both worlds. Yes, there is a manual gear lever, but there is no clutch pedal. How did it perform? Like clockwork. We never felt the lack of a pedal at any point; in fact, it became so intuitive that it was hard to imagine why all cars don’t get this as an option. 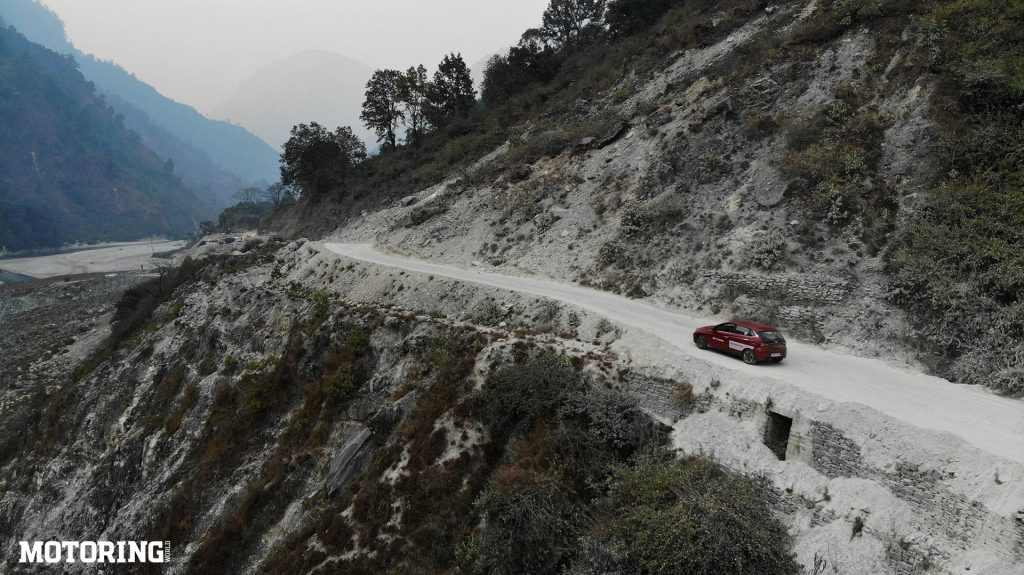 As the day was coming to a close, we reached the parking point to head up on to Misty Mountains. From here, we had to park both the all-new i20 and our support vehicle around three km from the actual property, on top of the mountain. The temperature now was almost at zero degrees, and we couldn’t wait to grab some grub and get into some cosy beds for a night’s rest. The darkness served as a canvas for the millions of stars and the lights of faraway villages, and it was spectacular, to say the least.

As the chilly night wind gave way to the blissful warmth of the morning sun, we were greeted by the sight we had been waiting to see all this while — the snow-capped Himalayan peaks, beckoning us. Instead of hitting the road once again, we decided to take in some local sights, an important part of any road trip. 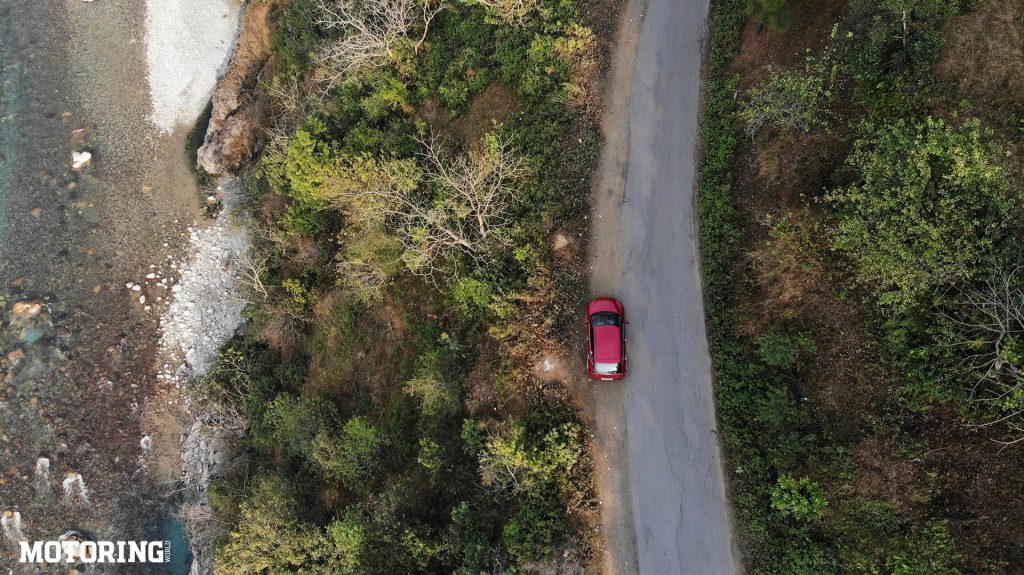 Our first task was to trek up a few kilometres to get a better view of the various peaks in the region. At the top, we met Swami Ji, who told us that although he had the choice of living in the city, he had opted to live here, because he believed that the difficult path is often the most rewarding. To us, that was the definition of a quintessential being of the mountains. All that mountain living had clearly done him a world of good — when we first saw Swami Ji, he was carrying almost an entire log on his shoulder, no small feat for a man in his late 60s. On the way back, we visited a 200-year old house that had been built by the British, an ideal spot to take in both the sunrise and sunset. Leopard sightings are common on the Misty Mountains grounds, but we weren’t lucky enough to spot one.

After a couple of days of experiencing the awesome hill roads, it was time to head to our final destination, the small and alluring town of Munsiyari. Why did we choose this town? To get a crystal clear view of the snow-laden peaks in the distance. Thus we were out on the road again, but this time, the going was tougher. The roads were now narrower and more broken, putting the all-new i20 through the wringer. But, as it had before, it showed us what it’s capable of. It shot up those steep and narrow roads without a hitch, and took every corner with confidence. Although we took the slow and steady approach, it always felt like it had more to give. That tractable motor, combined with all its safety features, made every single twist and turn enjoyable and safe. 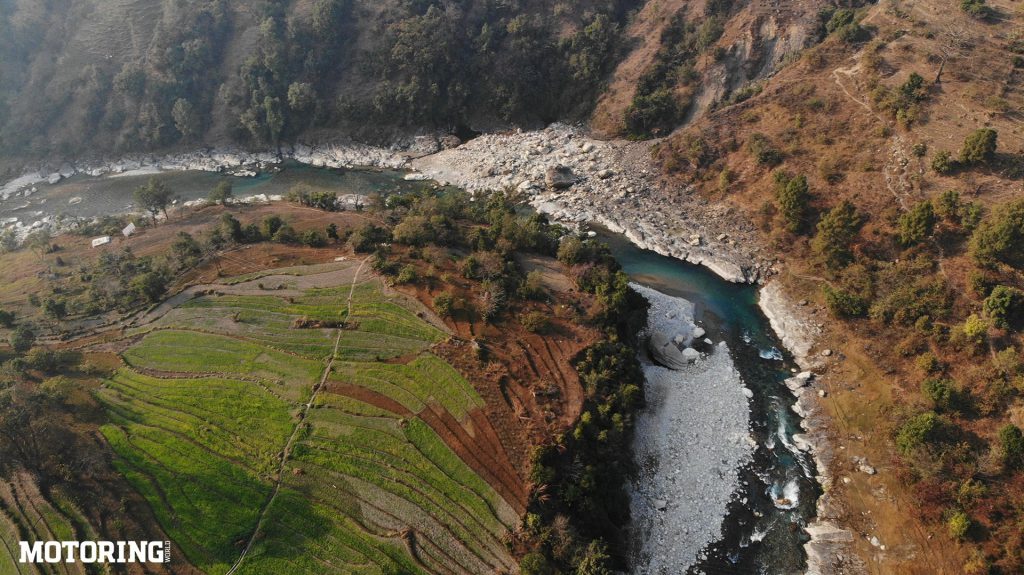 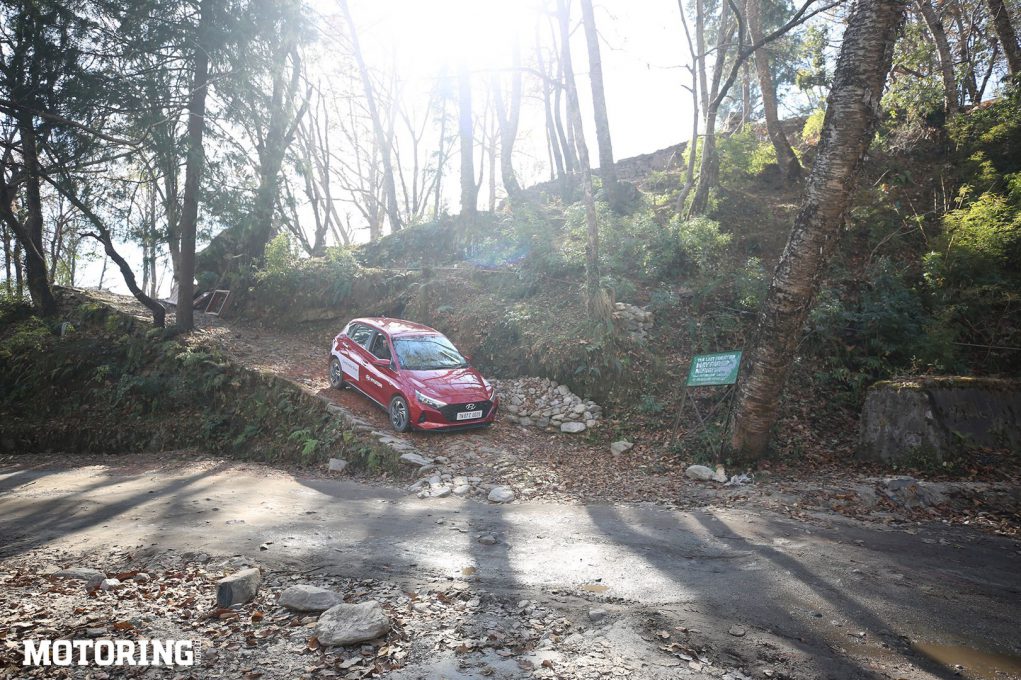 The all-new i20 has a way of isolating you from your surroundings and making you focus on the task of driving. The chunky steering wheel offers great feedback, and the well-balanced chassis and sorted driving dynamics make for a drive that would be hard to find in most other hatchbacks. As for its ride quality, every pothole and broken road was smothered thoroughly. As we began our final ascent into the town, the sun began to set and we knew that the end of the journey was closing in, which left us feeling a touch melancholic. 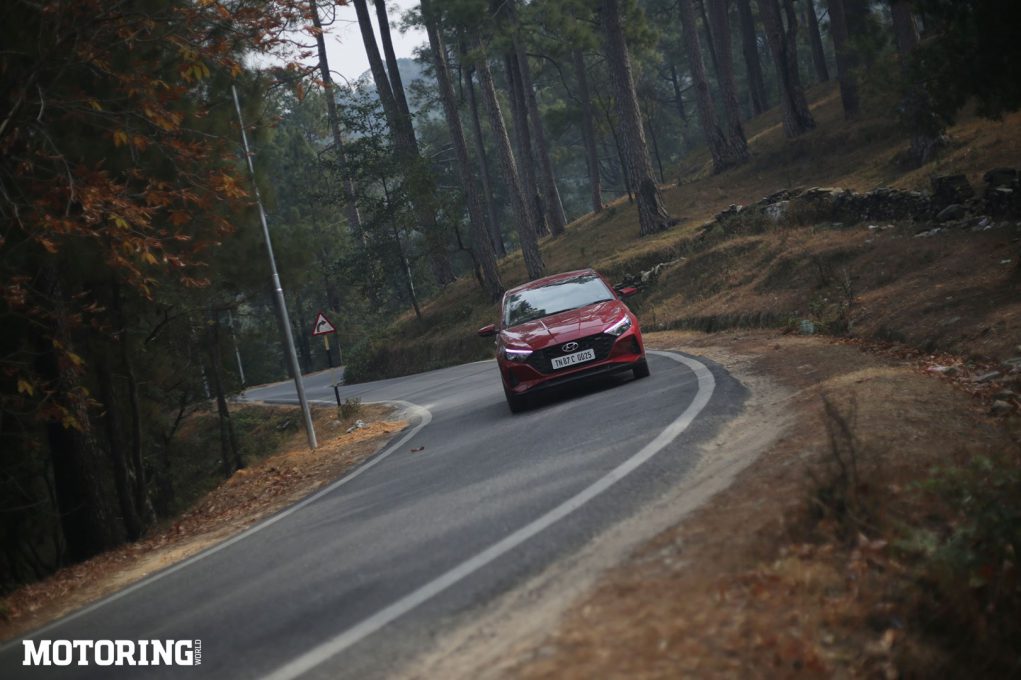 As we stumbled out of our beds at the crack of dawn the next day, we saw the glowing light of the sun coming through to us between the snow-capped mountains; it was a sight we won’t ever forget. It felt like the perfect end to the perfect road trip, but there was more to come. After feeling energized by the sheer magnificence of the surroundings, we hit the town early in the morning to see the sights. Through the narrow lanes, with locals sitting outside basking in the morning sun, we came upon the tribal museum, a place for the preservation of the history of Uttarakhand. You see, there have been several tribes through many centuries in the area, all of which come with their own special story. 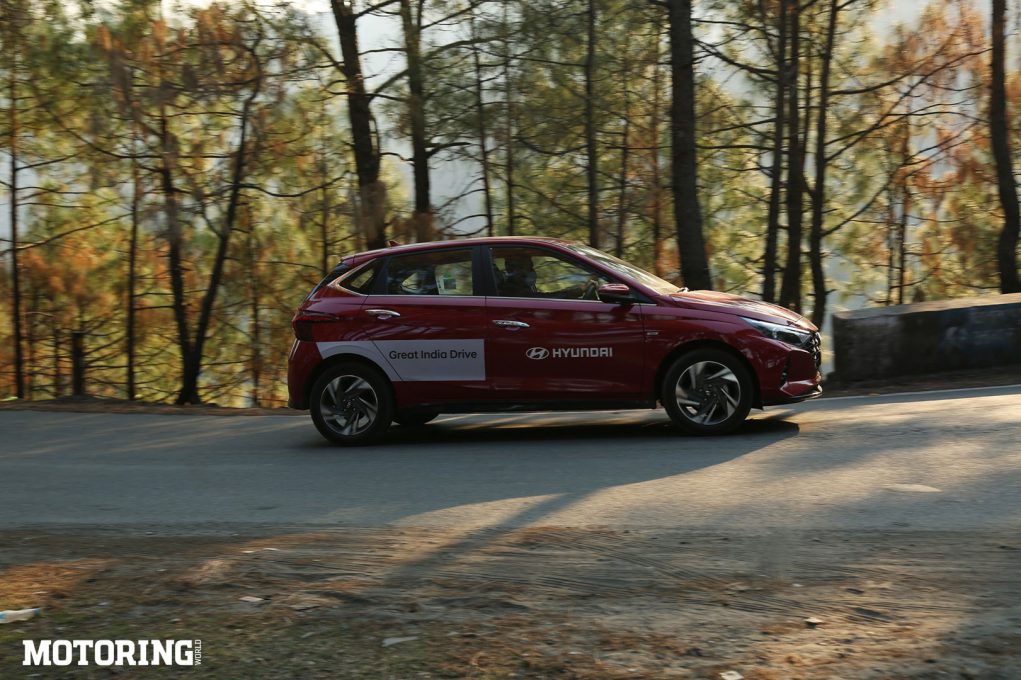 There are many other mountainous regions in India, but none of them is quite like Uttarakhand, a beguiling state with beautiful roads, spectacular scenery and down-to-earth people everywhere. Every time we found ourselves picking up trash we found alongside the roads, we would often find locals helping us. They too detested littering, as all of us should. The natural beauty of a place can only be preserved if each one of us steps up and take responsibility. It’s a small step too, so why not make the extra effort? 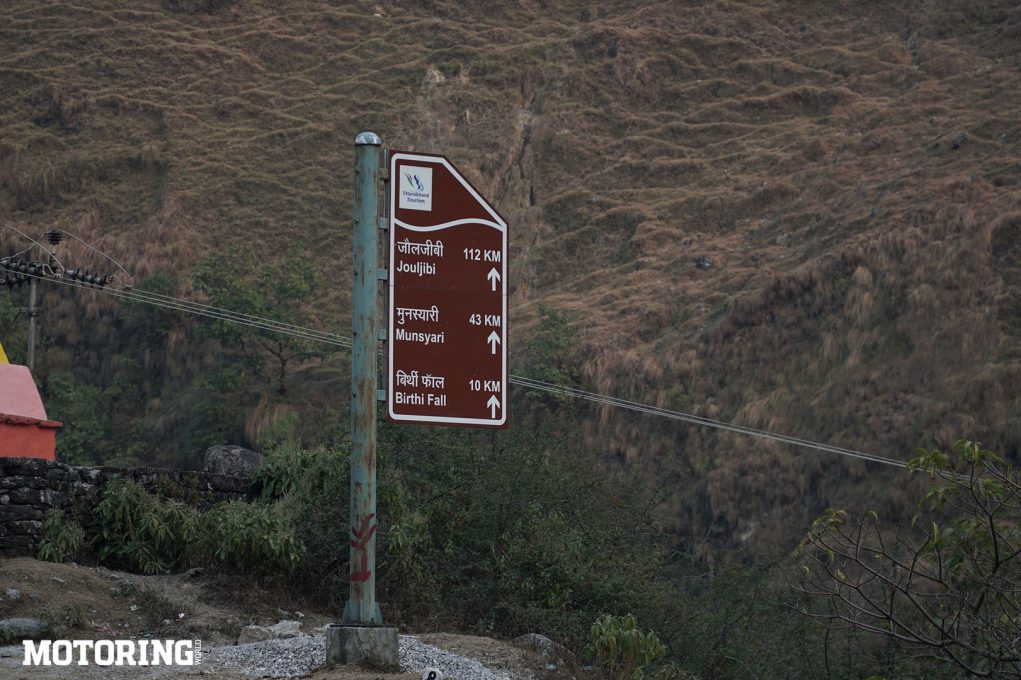 Around lunchtime, we decided to head down from Munsiyari to Almora, another dazzling mountain town, but before we did so, we took a final glimpse of the mountains that inspired us to take this wonderful trip. The grand view was only rivalled by the sunset we encountered on the way down — a sky painted in light orange, almost like a ‘thank you for coming’ from the hill gods.

We knew the all-new i20 was the star of the show, but it was only on the way back to Delhi that it hit us — it never once gave us a reason to complain. In fact, all the way to and fro, we found ourselves more and more impressed by the well-equipped hatchback. Everything from the Bose music system to the comfy seats, the lively and tractable engine, the crisp gearbox, the assured ride and handling, the touchscreen infotainment system — it all came together in a deeply satisfying manner. Make no mistake — if we had to do the trip all over again, we would choose the Hyundai all-new i20 and Uttarakhand, ten times out of ten. 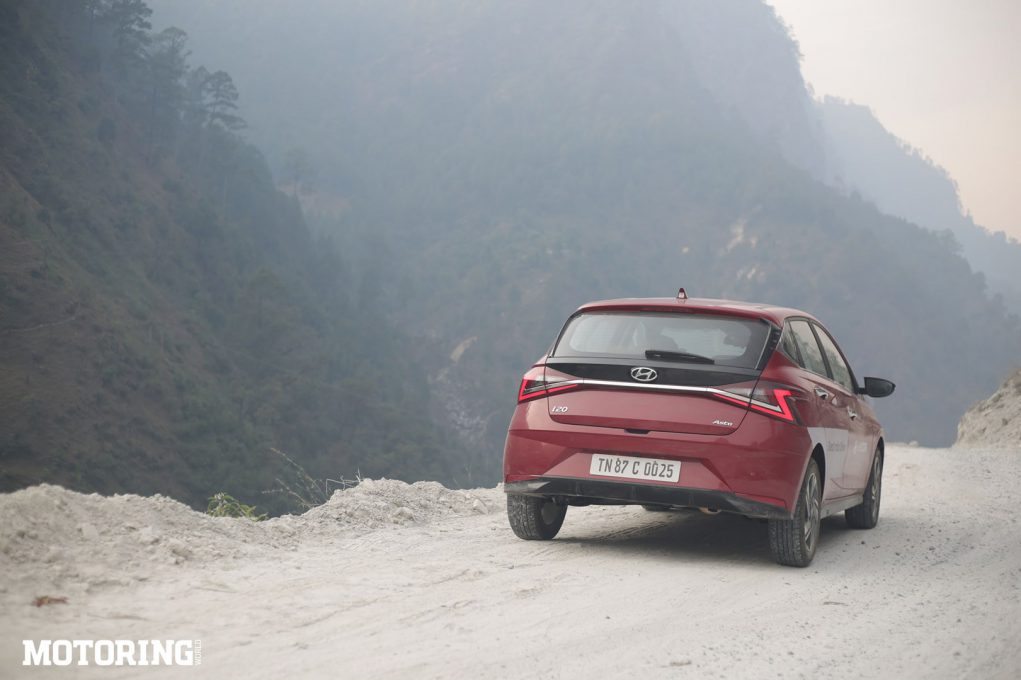 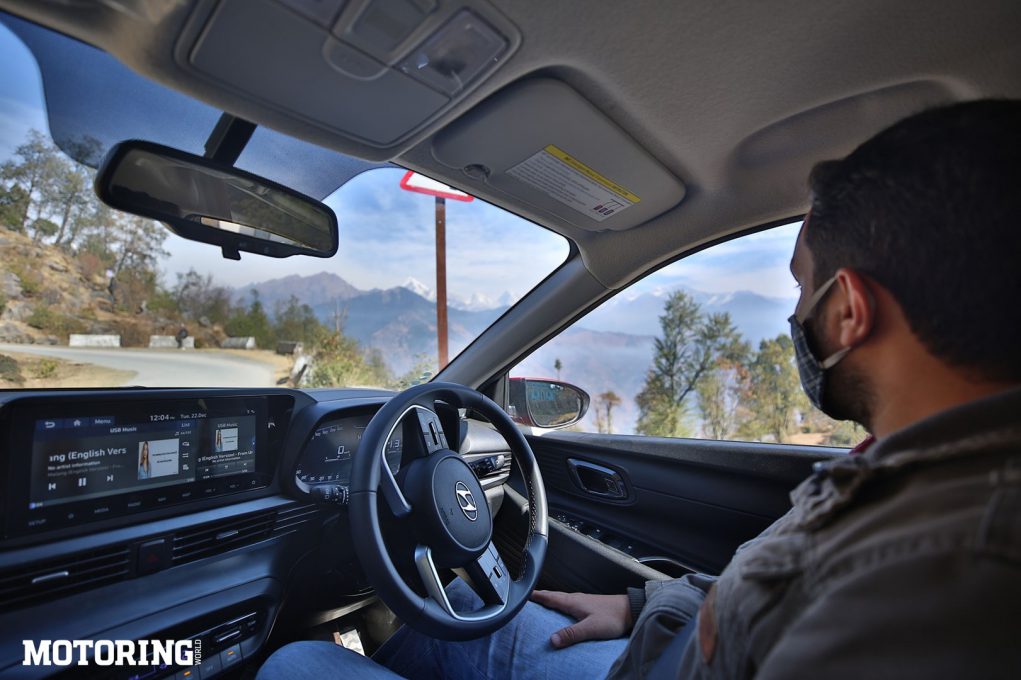