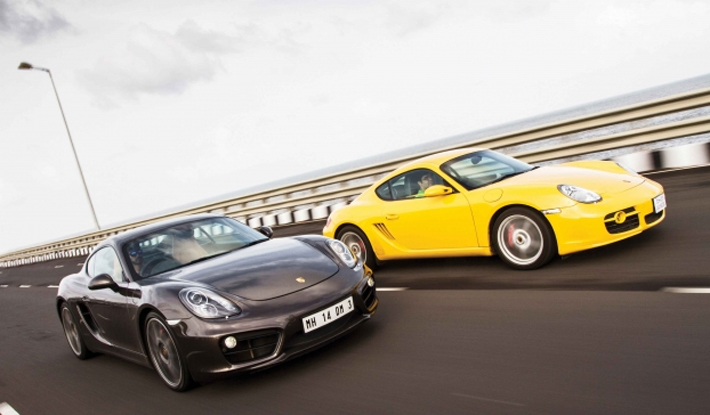 Are cars merely shells of metal or carbon fibre? Or are they beyond transporters of human beings from one point to another? If you take sports cars and supercars into consideration, then the answers are no and yes, respectively. Yet there are cars that transcend even that notion and go from being great to truly spectacular, due to certain factors that can only be felt from the seat of the pants. The Porsche Cayman fits that bill.

It does what it says on the tin and then goes way beyond. Take a mid-ship sportscar, douse it with character, lend it some personality and blend it with the rest of the range. It hunkers down around corners and finds an uncanny balance between feel, traction and predictable, on-limit behaviour. And frankly, the only equal in its class is… another Cayman.

The 987 Cayman S, the one that started it all in 2005, sits in the yellow corner. Reams and reams of paper have been utilised arguing how the Cayman has always stayed in the shadow of its bigger brother, the 911, and for a moment in ‘05, it nearly emerged out of it. Folklore says that Walter Rohrl, Porsche’s legendary chief test driver, slapped some tasty 19-inch rims on a Cayman S and went for a spin around Nordschleife. It should have been just another day at the office for Rohrl, but it seemed that in 8 minutes 11 seconds, not only did the Cayman S set a blisteringly quick time, it beat the relatively new, bog-standard 997 Carrera around the track by four seconds.

Of course, Weissach’s coats wouldn’t allow it to happen again, lest the Cayman stole the 911’s five-decade old thunder for good, but it was a good reminder that a Cayman with a really powerful motor could be a devastating tool. This early ’07 Cayman S still drives like it would make some modern day sports cars hot under the collar. Starting up the 291 bhp, 3.4-litre motor is a traditional affair — there’s a key instead of a key fob, while the handbrake on the left is as reassuring as a visit to your grandma’s. The original owner specced it out really well — yellow seatbelts and dial faces, leather seats, touch audio screen and adaptive damping. Slightly worn but not the worse for wear, the Cayman S still starts with a deep, boxer-six thrum that lets you know that this junior 911 is very much a Porsche.

It doesn’t take long to appreciate the things that we took for granted not very long ago. Hydraulic steering, for example, may wear early and require attention as time passes, but a nicely set up one like this simply oozes with feel. With its short wheelbase and overhangs, the 987 flits through corners with such a degree of precision and alertness, it’s a bit like a hyperactive pup. The harder you push, the more grip it finds and it’s only somewhere past eight-and-a-half tenths that the older sibling tends to move around a bit. That for some may be a bit disconcerting, but at full chat, the 987 on a winding section of road, with the Tiptronic gearbox in sport, is a very engaging and rewarding experience. The whole chassis tends to wrap right around your  seat bottom.

It’s like the seat is directly connected to the road, feeding all kinds of information through all sorts of parts — the chassis, tyres, suspension and steering. But nothing elevates the experience like a perfectly judged bump or a cambered corner. It simply digs in its paws, and goes in and out with just that slight hint of understeer, but with all the muscles on your face working seamlessly to get a smile out of you. Frankly, words cannot begin to describe how effortlessly the Cayman starts to shrink around you — you feel like you’re wearing the car as a bodysuit. Even when the cambered sections get deeper, the suspension simply sorts it out, with just a mild thud.

From the slightly musty and partially cracked leather seats, the 981’s pristine interior feels like a very different place. Like the rest of the range, the Cayman has gained in size; the enhanced wheelbase, larger wheels and pushing the wheels further out to the corners has genuinely improved the Cayman’s poise. With a slight degree of GT-like comfort and with more supportive seats, more room for your luggage and for the occupants, the Cayman rides even better now. Over smaller bumps, it’s more settled, the revised suspension geometry and the longer-by-60mm-wheelbase makes the car feel a bit luxo-saloon than hard-as-nails sportscar. It’s lighter too, 30 kg less than its predecessor, with a mix of aluminium and steel for the bodyshell, like the 911.

From behind the wheel, the electric power steering may not be as communicative, but it’s well weighted. Hang on to it around corners and you can accurately gauge what the front wheels are up to. On a damp, twisty section, the Cayman’s grip is unreal, and it takes superhuman effort to get it ragged. However, mash the throttle in anger, upset some of that hard-nosed balance and you may find some tail-out moments. The point at which grip starts to lose the fight is an even more gradual process than the 987, the fast-turning steering simply aiding the process as it unwinds and winds back  with precision.

They say Porsches are more evolution than revolution, but I think they are somewhere in between. The more you stare at the two generations, the more it becomes amply clear that the design has really taken a three-quarter step ahead. Where the last Cayman was more focussed as an out-and-out sportscar, the new one has donned more roles – a bit of GT and a bit of luxury. Pulling the windshield baseline forward, adding vertically stacked headlamps, increasing the size of the side-scoops, pulling the waistline further back and marrying the tail lamps with the winged tail spoiler may have done the trick, but the garnish on it all is the subtle use of chrome in places, to add that touch of premiumness.

On the inside, too, apart from the cupholders that seem to have found home in the new car as well, there’s literally nothing in common with its predecessor, though it’s not too far removed from its current brethren. All major controls have been moved from the centre console to the central tunnel, and there are more polished aluminium bits than brushed ones and cleaner surfaces. The dials are placed in the usual Porsche fashion, but you now get digital faces instead of needles for the dials, and information to toggle through — like engine oil temperature and GPS, to name a few. The 981 had a sport steering, but if you don’t opt for it, you still get toggle switches, like on the 987. Some things just never change.

The Cayman doesn’t exist in a world of front-engined sports cars, or supercars. It resides somewhere in between, joined by its open-top twin, the Boxster. It’s not a compromise, but a left-of-field approach in a world filled with me-toos and safe alternatives. It’s also a perfect stepping stone for those looking for a supercar as their next upgrade. In a word, perfect!