Goa, the tourist-friendly coastal state that for the majority of tourists in the country (and even foreigners) means just one thing: party. But ask a local, talk to a learned traveller, or even look it up online, and Goa is way beyond thumping music and recreational substances. A prominent territory not just for the Portuguese but also for the Mughal, Maratha, and Bijapur kingdoms, among others, Goa has a long history. And that’s even before we speak about its relevance in modern-day India and how it became the hot spot for explorers, overlanders, and of course, the hippies. But its variety doesn’t end there, either. It’s home to some of the finest churches in the country — a fact cemented by its inclusion in the UNESCO World Heritage list. As luck would have it, we found ourselves in Goa ready to explore the UNESCO site. Serendipitously, slipped in my back pocket were keys to the Hyundai i20 N Line. Could it get any better!

The thing about such drives is that all the exploring new roads and finding gems like Goa’s Churches and Convents aside, it gives us the chance to live with a car for a long time. By the time I reached home, the i20 N Line had done just over 1500 km, and that mileage helped me understand it better. It’s a momentous product for Hyundai India, as it enables the carmaker to offer enthusiasts a car that’s made specifically for them. Its capabilities are evident from the moment one gets behind the wheel that one doesn’t even need to head to the racetrack to appreciate it. I’ll come to how it’s to drive on long journeys like the one we’re on, but first, l mustn’t fail to mention that with all the added inclusions (cosmetic and mechanical, both), the i20 N Line feels like a pretty special car — on this pretty special journey.

In the UNESCO World Heritage list, the Churches and Convents of Goa are included as a collection of seven sites. These are situated in what is now known as Old Goa, and each one of the sites has a story to tell. That is once you get over the fact of how beautiful these are, even when inundated with tourists who seldom show regard for the fact that some of these are still places of worship. But as benevolent as Goa is, its churches are also accommodating. It’s a shame though that photography within these isn’t allowed, because all the churches that we visited are beautiful beyond what words could describe. Tall ceilings, intricate work on the walls, statues with human-like expressions, and of course, the peace and calm that’s second to none.

We start with the most popular of the lot, the Basilica of Bom Jesus. It’s a fully functional church, with regular prayers and even a yearly Feast of St. Xavier. The church houses the mortal remains of St. Francis Xavier in a glass coffin. What makes the church different from others in Goa is that it doesn’t have plaster on it. While weather has taken its toll on the exterior surface, it still retains a unique look on the outside.

Situated right across the street is a complex with Goa’s archaeological museum. Like everywhere else, you aren’t allowed to photograph inside, but it’s a must-visit, if you’re interested in Goa’s history and how it fared under the reign of various kingdoms. It’s easy to be impressed by the vastness of the museum, but it’s only dwarfed by the adjoining Se Cathedral. It’s said to be the largest church in the whole of Asia and has neatly maintained laws outside. There’s also a nice museum inside which gives you an idea of how the church’s hierarchy changed over the years, a history lesson on Goa’s churches, photographs of the Popes, etc.

While no longer in use as a place of worship, the Church of St Francis of Assisi Oval Maidan has Art Deco buildings on one side and Victorian Gothic ones on the other allows one to not just take in the detailed sculptures and floral designs on the walls but also photograph them. The condition of the walls might not be as pristine as other churches, but it’s a great workout for the neck. Because the ceiling is tall and at every level, there’s something ready to capture your attention. In the centre is Jesus Christ on the cross, on whose right is St. Francis.  In the same compound is the Chapel of St. Catherine. As the Portuguese gained control of the territory from the existing Muslim ruler on St. Catherine’s day, it’s said that in place of the main entrance of the city of Ela, a chapel was erected. This was in a few years rebuilt into what is today the Chapel of St. Catherine.

Then there is The Church of Our Lady of Rosary. It’s said to be the oldest of the existing churches, and if one were to enter Goa through the Mandovi river, it was the first sight that welcomed them. Its Manueline style sets it apart from the others in Goa, although cues of the same style can also be seen in the Church and Convent of St. Francis of Assini mentioned above. On the opening pages of this story is the Chapel of St. Cajetan. It replicates Rome’s St. Peter’s, and it is the only domed church in Goa. It was made when the Italian friars reached India to preach their religion. They wanted to do that in Golconda but on the refusal of entry, they stayed back in Goa. Glad they did. 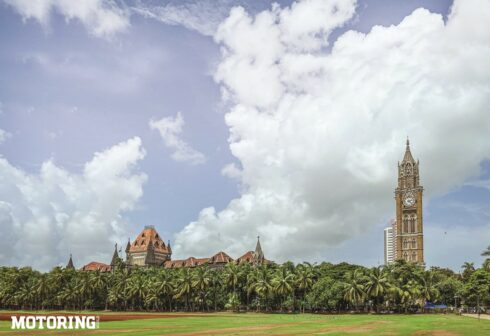 The final one in the collection of churches and convents is the Church of St. Augustine — or rather what remains of it. It was constructed in the early 1600s, but abandoned in the 1830s. This led to the downfall of what would’ve been a beautiful and imposing structure. By the mid-1900s, the majority of the church was gone. What still stands tall is the 46-metre-high tower, which was a part of the church’s facade.

After witnessing Goa’s stupendous churches, we were ready to move on to the second leg of our journey — the journey back home to Mumbai. This is where the Hyundai i20 N Line demonstrated why it makes sense to have driver-focussed cars, even if you are not driving at 10/10ths always. Its 1-litre turbocharged GDI engine produces 120 PS and 172 Nm, and with the 7-speed dual-clutch gearbox, it offers an unmatched sense of urgency. With suspension tuned keeping the keen enthusiast’s driving preference in mind, it offers agility and high-speed stability in equal measure. Disc brakes on all four wheels are something not seen on standard road cars in this segment, and the resultant braking confidence is on a different level here. What makes the N Line a great highway companion is its ability to cruise endlessly without tiring the driver in any way. A 10-hour or so journey back to Mumbai was handled with absolute ease, and the credit also goes to the long list of features on this premium hatchback. From the sunroof to its ear-pleasing 7-speaker Bose audio system, from the all-digital instrument console to 10.25-inch infotainment screen, from the conveniently placed wireless charger to the powerful automatic headlamps, the i20 N Line just kept on looking like the perfect hot hatchback on the market.

Talking of perfection, Mumbai is pretty much that. Anyone who’s lived here even for a handful of years knows that this is it, possibly the best urban life you can ask for. That might be a tall claim but the coexistence of a variety of architecture here lets Mumbai take the cake and have it too. UNESCO recognised Mumbai’s Victorian Gothic and Art Deco Ensembles as a heritage site in 2018, and that gives us a good reason to spend a day driving around unimaginably pretty buildings, the majority of which are maintained really well.

It all begins with Oval Maidan, on whose east is Victorian Gothic buildings. These are what tourists loosely refer to as British architecture. In reality, these are a mix of Victorian and Indo-Gothic styles, they are generally grand, and the majority of these are used as public buildings or offices now. It’s nearly impossible to ignore the presence of the buildings because a) they are absolutely breathtaking in size and beauty, and b) they are in unexpectedly good shape.

On the western side of Oval Maidan is where things get interesting. The residential apartments here are all Art Deco. The type of architecture that Mumbai is famous for, and while not as popular or welldocumented as Indo-Gothic, Art Deco is this city’s unashamed display of panache. From intriguing motifs to streamlined balconies which appear to have just stepped out of a wind tunnel… Mumbai is home to the second largest collection of Art Deco buildings in the world. And with the Art Deco Mumbai Trust working hard to identify and educate people about the style, it’s hopefully going to stay like that forever. 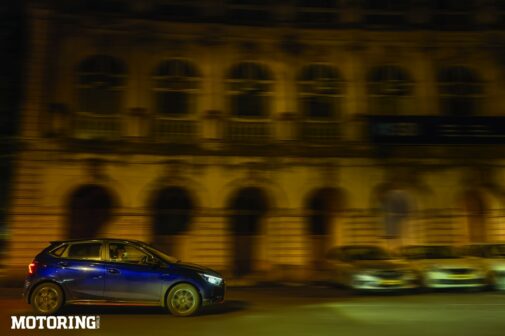 Both Old Goa and South Mumbai display a distinct diversity in Indian architecture and prove that despite being made by foreigners, the Indian elements would somehow always make it into the final design. The i20 N Line proved to be a great road trip companion on this relatively short drive of ours. It isn’t just powerful enough to eat highway miles but it’s also the right size to explore cities. From finding its way in the narrow lanes of Goa to negotiating traffic in the heart of Mumbai, it handles everything flawlessly. But the main reason why it’s our favourite is that it adds flavour to the whole Hyundai India lineup. It shows that even among some well-rounded cars that the brand offers, there has to be a model that proves to be different. We thrive on diversity, and the i20 N Line is just like us.