I repeated the name several times trying to recreate the natural lilt of Italian, the language it belongs to. And in the background, my mind was trying to do the same in a Chinese accent. In any case, ‘Sei e mezzo’ means ‘six and a half’, yet another example that Italian can make the most dreary words sound as exotic as unicorn horns. The nomenclature also follows Moto Morini tradition by continuing the titles given to the 3 ½ of 1973, the 9 ½ of 2006, and the 11 ½ of 2014. The extra ‘m’ in the name is ostensibly to make it match the initials of its maker, the historic Italian manufacturer that is now owned by the Zhongnen Vehicle Group of China. As with KTM’s and BMW Motorrad’s smaller bikes in India, these Moto Morinis are designed in their country of origin and then produced in a place that lets them work out cheaper. Cheaper, yes, but are they cheap in more ways than one? More on that later. 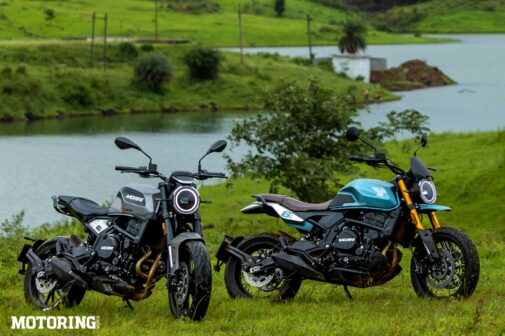 Historically known for their mighty V-twins, regardless of displacement, even Moto Morini has had to resort to parallel-twins for the obvious production benefits they bring. And even in the decidedly short time I had with the two versions of the Seiemmezzo, the Retro Street and the Scrambler, it was clear that they don’t skimp on fun. The two variants have some crucial differences; different handlebars, tyres and bodywork being the chief of them, and each puts a different twist on the character provided by that 649cc P-twin. It produces 55 bhp and 5.50 kgm of peak power and torque for a package that weighs in at 215 kg in either case. 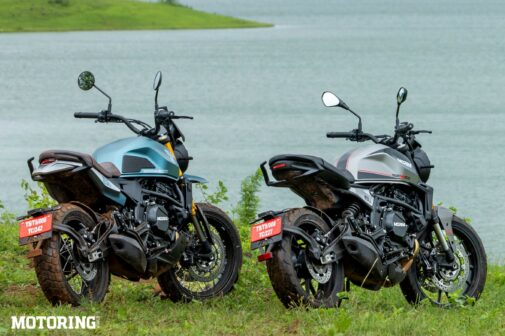 Both the Seiemmezzos have that neo-retro look down pat. They’re both quite compact for a 650cc bike, too, enough to make even that 15.5-litre tank look much bigger than it actually is. The quality and level of kit on offers is very comprehensive as well; both get tubeless wheels and tyres, front suspension adjustable for compression and rebound (rear suspension adjustable only for preload, though), tyre pressure monitors, LED lights all around, Pirelli tyres (MT 60 RS for the Scrambler, Angel GT for the Retro Street), and a lovely matte-finish screen with all the data you need to ride. And since China is involved in these bikes, I have to say that absolutely nothing feels cheap or flimsy, except perhaps the switchgear. That’s no olive branch, just a truthful report of how the bikes actually feel. 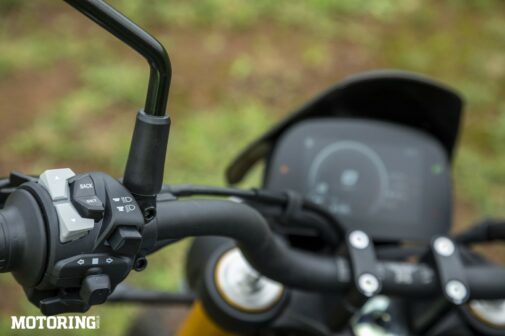 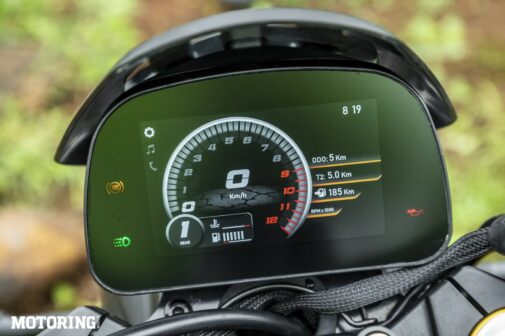 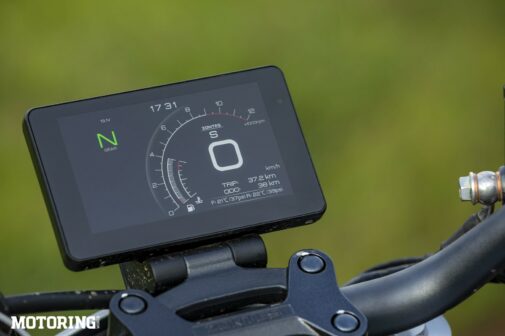 Speaking of feel, the P-twin is quite a flexible creature. Like an overwhelming majority of its kind, it has a V-twin-mimicking 270° crank, imagined to deliver the best of both worlds. Now call me a contrarian, but I much prefer the 360° boom of the Benellis and the 180° scream of smaller Japanese twins. Nonetheless, the Seiemmezzo’s motor can putter around in commuter mode without complaint, seamlessly short-shifting through the gears to buzz around in top gear at 60 kph. Bang down the gears and wind open the throttle, and the Six And A Half takes off down the road with an intake roar that drowns the single exhaust’s sound. First gear is good for over 70 kph, while a couple of more shifts easily take the bike past 140 kph. That’s plenty of velocity-based entertainment, I’d say, without doing even a single top-speed run on the thing. 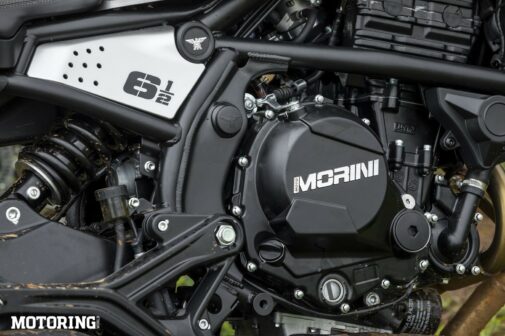 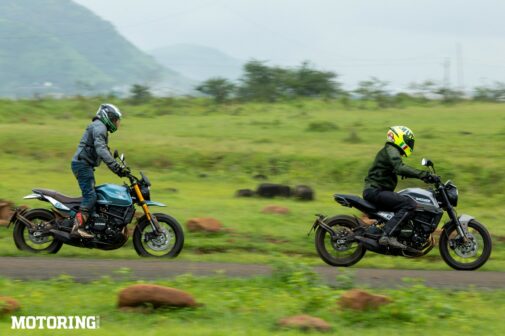 The motor’s quite smooth, too, with its vibes falling largely in the sweet spot of the spectrum that stretches between bland and uncomfortable. However, now that I’m firmly used to slipper clutches, not having one on a fast 650 was a bit of a downer. Don’t get me wrong, I do like a rear end that adds drama on the way into a corner, but the Seiemmezzo’s tail hopped like a demented rabbit, making noises like the swingarm was falling down a flight of stairs, even when braking moderately hard for an unmarked speed breaker. This sort of behaviour is harsh both on the motorcycle and the rider, and can be easily avoided by adding a system that even a 150cc bike has these days. Especially so, when the motor and the rest of the Seiemmezzo encourage the rider to go as fast as possible. 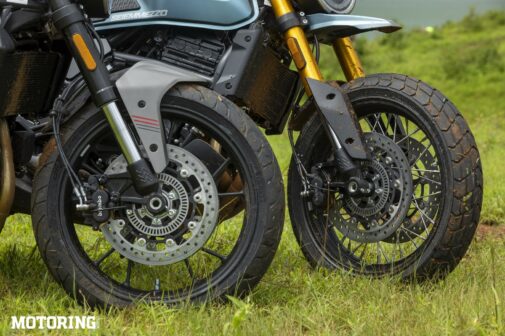 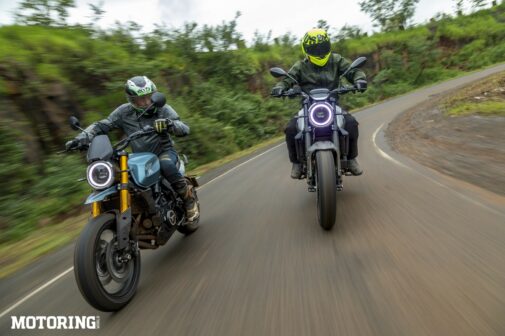 The difference between the Retro Street’s and the Scrambler’s ergonomics and tyres mean that the former is noticeably the sharper one of the pair. Turn-in is sure-footed on both the Halfs; the Scrambler’s taller ’bar gives heaps more leverage, while the Retro Street’s shorter one allows more direct and precise inputs. These attitudes go well with their respective tyres to make for suitably different riding experiences, both of which are a lot of fun. And that’s about all I can say after riding them for about an hour. What I can add to that is the fact that I want to ride them again in familiar surroundings, on roads where they’re meant to be ridden. Colour me most definitely intrigued. 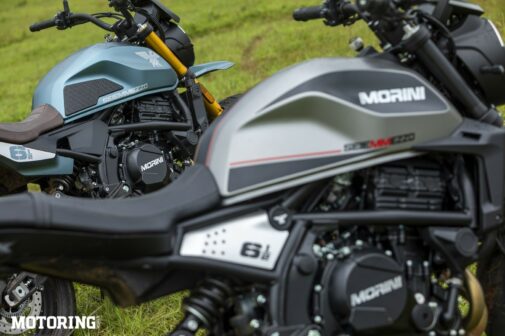 Arriving under the new Moto Vault entity managed by the Hyderabad-based Mahavir Group’s Adishwar Auto Ride India, Moto Morini’s fortune rests not in its bikes but in how they’re made. The problem with these bikes is certainly not Chinese provenance anymore, but Indian execution since they enter the country as CKD units, and this has been my experience with earlier Benellis as well. The bikes I rode had loose steering heads, faint metallic rattles coming from somewhere near the engine, and one bike had a front brake that needed bleeding. Given that Moto Vault is clearly on to something great with these bikes, I hope it can sort out these niggles before bikes start heading to their owners’ garages. And avoid the supposed bad luck associated with the number you get by adding 6 ½ to 6 ½.