I had a sense of it, but never realised its true intensity until I wrote this story. If I ever was to consider purchasing an electric scooter, I would end up confused in the first five minutes itself. The credit for that goes to the variety of EV options that are currently flooding the market. With the government offering subsidies and benefits, this is only going to expand further and get a lot more confusing and complicated as new startups pop up now and then. Mind you, I am not even considering the flagship scooters from the makers like Ather, Ola and Bajaj here. 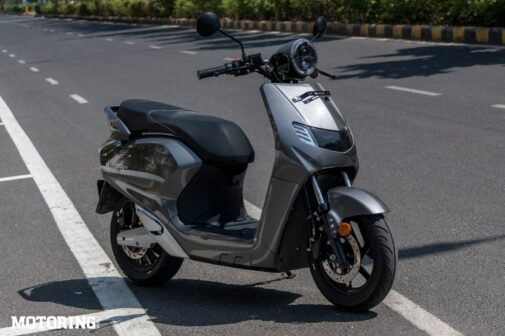 In this whole clutter of EV domination, one company seems to have found a way to stand out from the crowd. Bounce, a Bengaluru-based firm has launched their first electric scooter Infinity E1, with two promising USPs. The first one involves two prices to choose from, where one includes the battery and the other does not. Yes, I am not joking, they’ll sell you a scooter without a battery. The second USP is linked to the latter wherein Bounce will rent the battery to you on a subscription basis, while each battery swap will cost the user a mere Rs 35. Yes, Bounce is not the first company to come up with battery swapping technology. But, the company has worked out a plan to set up battery swap stations to address the range anxiety issue. All one needs to do is pull up to any of the swap stations, access the Bounce cloud network through a smartphone, and once the payment is done, swap the depleted battery with a completely charged one. It would more or less be equivalent to the same time involved in filling fuel.

Now there are more advantages of the removable battery that need to be mentioned, especially in metro cities. If a buyer has purchased an Infinity E1 with a battery, the user will have access to multiple options to charge the battery. Not everyone has the convenience of having a power supply in their parking at home or work. In that case, the user can simply take the battery off the scooter and carry it with them home or to their work desk and charge it. The only downside to this is the weight of the battery which stands at nearly 12.5 kg, which can be quite a workout if the distance from the parked scooter to the charging point is far.

With the main USPs covered, let me come to the other aspect of the Infiniti E1, the scooter and its ride. Now, the company had informed us that the scooter was in pre-production ready form with few rough edges and was running beta software, all of which will be taken care of before the deliveries of the scooter commence in April. However, what does not change in the scooter is its powertrain. Now, if you were expecting some serious acceleration and range numbers, then apologies for letting you down. Bounce has positioned the E1 in the void that is currently present between the premium and regular EVs. That said, in terms of range, the E1 is designed to return 65 km on a full charge, which is acceptable, considering the battery swapping provision. Meanwhile, on the performance front, the scooter is capable of achieving a top speed of 65 kph in Power mode. The same drops down to 40 kph, when the scooter is ridden in Eco mode.

Now, given a choice, I would ride an EV scooter for most of its time in Power mode. Because that is the only way to understand the true potential of the scooter, right? Yes, but again that is not how electric vehicles are fundamentally designed to perform. Also, the battery on my test vehicle was half-charged, and hence to not let that range anxiety kick in, I rode it the maximum time in Eco mode. Only occasionally switching to Power mode. Initially, the limited speed of 40 kph did annoy me a lot as every other motorist overtook me. Eventually, I did manage to make peace with the pace and to be frank, it wasn’t that bad, as long as you avoid getting in the way of other motorists. And whenever I did need the speed to either ascend a flyover or a steep section of road or make a quick overtake, the Power mode managed to take care of it with ease.

Apart from the two modes, the Infiniti E1 also comes with a reverse and drag mode. While the first one is self-explanatory, the latter is designed to provide just enough motive power to walk with the scooter. This can be used when the scooter’s battery has depleted, or when there is a puncture in one of the tyres, and it is not in rideable condition. Quite a thoughtful feature, I’d say.

When not in drag mode, the scooter offers a decent ride to putter, within the cityscape. The suspension is not great, but neither terrible to complain as such. The seat height of 780 mm is good, but the wide seat design might pose an issue for shorter riders to get a firm footing. Also, the handlebar is positioned low, which would have been nicer if it was slightly higher. In the current position, the thighs come in the way when taking U-turns. Furthermore, the scooter employs disc brakes at both ends, which, in my opinion, are too sharp and need to be calibrated for a little softer bite. Similar goes for the throttle calibration, as I did experience lag to get moving from a standstill, and sometimes it wouldn’t accelerate even on twisting the throttle. Lastly, in the current pre-production state, when taking left-handers, the kickstand protrudes a lot as it digs into the tarmac, making it a scary experience. Bounce has said they are reworking the design which will be included in the final version. 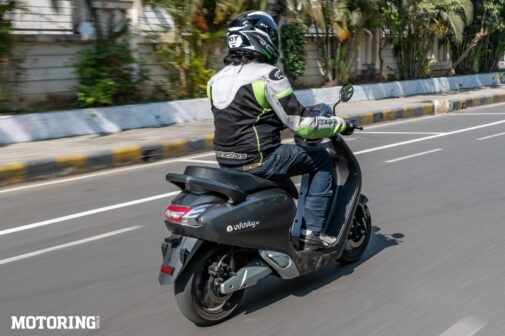 To conclude, the Bounce Infinity E1 has the potential for an interesting EV proposition, especially due to its lucrative pricing structure and battery swapping program. Yes, the scooter does have a couple of rough edges that the company plans to iron out before it commences with the deliveries. In hindsight, the Infinity E1 is an EV that doesn’t aim to match the level of a premium one nor be just another one in the plethora of options in the market. It is somewhere trying to offer the best of both worlds, which only in the coming time will confirm whether the strategy has worked out or not. That said, I am glad I have no plans to consider buying an EV any time soon.