Race weekends are always fun. From pre-race preparations in the pits to the excitement during the race, to the celebrations that follow, there is a lot to see, observe, learn, and experience in such events. Hailing from a mechanical background, I always find it fascinating to watch the pit mechanics tinkering with the race machine — in this case, the RE Continental GT-R650. After a successful inaugural season of the Royal Enfield Continental GT Cup, I, along with a bunch of journos, had been invited to witness the opening round of the second season at Kari Motor Speedway in Coimbatore. And if everything goes smoothly, we would also get a chance to ride the GT-R650 cup bike on the track. 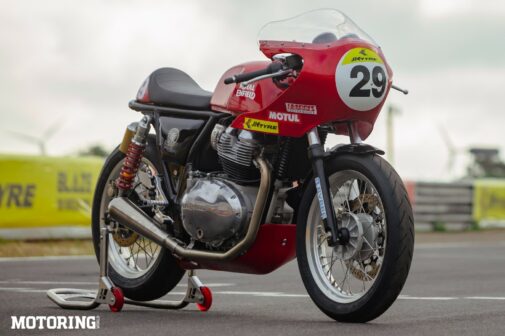 Now, before I tell you more about the race weekend, let me educate you on the street-turned-race machine here. I think it would be safe to assume that you are aware of the RE Continental GT 650, if not, then shame on you. Okay, just kidding. The 650 Twins are one of Royal Enfield’s popular modem motorcycles. Sales have been doing great in the domestic, as well as international markets. I have been lucky enough to have them as long-termers for the longest time and I had a lot of fun with them.

Coming back to the bike here, it is the same Continental GT 650, but one that has undergone a sizable weight reduction. A stock GT 650 weighs about 202 kilograms, and the one seen in these images is lighter by about 25 kg, which is a whole lot. Dropping weight is a very important factor when speaking of race bikes as it is directly related to how fast the motorcycle accelerates, weight transfer while cornering, and the load on the brakes. 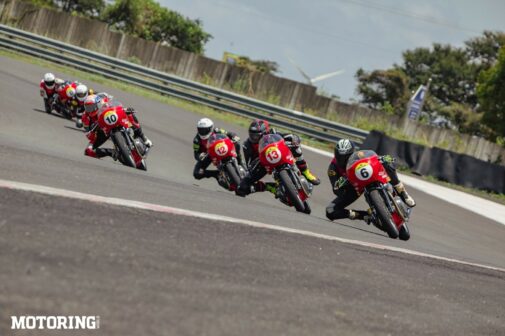 Among the other changes, firstly, the GT-R650 gets a sleek-looking compact set of stainless steel exhausts, which not only sounds insanely loud and good but is much lighter compared to the stock system. To be precise, we are looking at 16.5 kilograms of weight taken off the bike with just the exhaust system. Next, is all the auxiliary equipment, like the headlight, taillight, indicators, and the corresponding wiring, which have been replaced with a lightweight retro-styled race fairing and a tail hump at the back. The seat is the single-seater touring one that RE also sells as an accessory. Other bits include lowered clip-on handlebars, and aluminium rear-set foot pegs that have been updated for season 2. Besides these changes, the engine, transmission, and the chassis remain untouched. The reason for that is, RE wants to keep the parameters as simple as possible, and provide an equal platform for every racer who is competing in the championship. 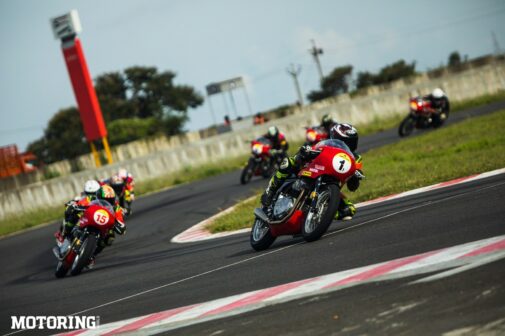 With the above-mentioned weight-shedding jobs, the GT-R650 continues to be a 190-odd kilogram race bike, which means, it demands respect, and can’t be haggled with or toyed with in the manner you would other modern and lighter race bikes. A typical RE Continental GT Cup weekend comprises two practice sessions, one qualifying and two races that are spread out over three days. Since we arrived at the track on Saturday, we got to see the qualifying session followed by Race 1 later in the day. 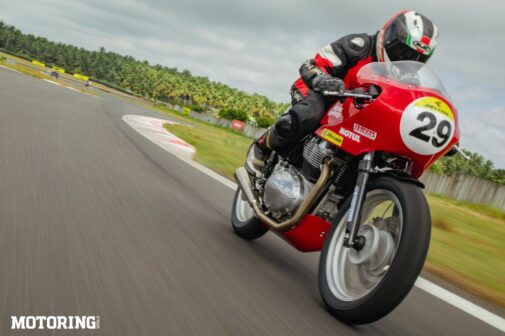 Now, race weekends are mostly shared with other racing genres, and so was the same here. However, racing also means crashes and a bunch of them can delay the day’s schedule. We were supposed to get to ride the GT cup bikes once the races were over, but couldn’t, as we had run out of time for the day. Thankfully, the folks at RE had managed to squeeze in a sizable window for the following day in the morning, before the day’s races started.

The following day, all suited and booted with my helmet strapped in, I got onto the bike, turned the ignition, and cranked the motor. Goosebumps, I tell you! The sound gushing out of the unrestricted pipes was orgasmic. A few blips to the throttle and you can feel the raw power of the 650cc parallel-twin mill. The rear-set foot pegs are properly aggressive, so slotting in the first cog and settling in on the bike, and the very committed riding stance, does take a while to get accustomed to. Since we all were given 15-minute slots to ride the bike, I had to make the best of it while keeping it in one piece. The golden rule of riding a motorcycle on a racetrack is to go easy for the first one or two laps, mainly to let the tyres warm up, and to get a hang of the motorcycle. That’s even more true if you are riding the GT-R650.

The reason I’m saying that is because, unlike modern race bikes that are a lot lighter and more capable machines that can be easily flicked around corners, the GT-R650 is more of an old-school retro class race bike. It is heavy, has a long wheelbase, is very torquey, and is devoid of any electronics. So, you need to have the right skills, well-tuned ones, to be able to ride the bike like the devil around the corners. Having said that, I choose to go easy for the first three laps, while gradually increasing my pace by increasing cornering entry speed and braking later. 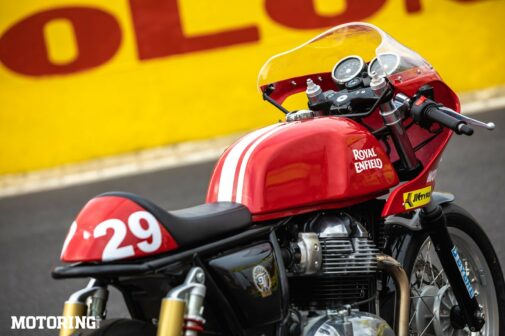 The one thing that does take too long to get used to, and takes a sizable space in your riding dynamics, is the bike’s weight. But people used to race with such heavy bikes in the past and they would go fast, too, and win races. The trick here is to avoid leaning on the bike too much. Instead, hang off the bike enough to corner in the quickest manner. Also, the GT Cup bike engines are stock (besides a remapped ECU) but still redlines at 7000 rpm, so downshifting to the second gear before entering a corner meant too little time at the exit, where the gear is already maxed out. A gear higher is what is recommended on such bikes that are high in torque, and have a limited rev band.

I had done four laps by then, and I thought I was getting the hang of riding this motorcycle. But at the same time, I was also getting tired of the whole task of keeping the bike’s weight in control from corner to corner. The GT-R650 race bikes ride on JK Blaze Ryder tyres, which offer all the grip that I could have asked for. I know for a fact that I was nowhere close to using the tyres to their full potential, but they did increase my confidence to push the bike harder through the corners. By the sixth lap, the session was over and I was back in the pits, all drenched in sweat, but happy to have experienced what it felt like to ride a powerful and demanding modern retro-class race bike.

As the day progressed, watching the racers pushing the same GT-R650 cup bikes to the absolute limit, left me with lots of respect for the competitors. It is one thing to race on a conventional race bike, and another thing when it comes to riding the GT-R650. In my opinion, the GT-R650 is a very demanding bike that requires the right skill set and commitment to be able to race it, rather than just ride it. 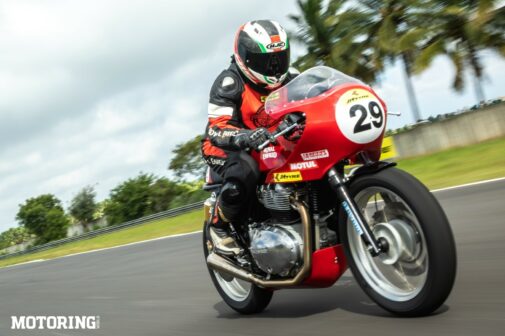 But, in hindsight, for a manufacturer like Royal Enfield, the Continental GT Cup opens the doors for a lot of aspiring racers, without having to invest a lot. Secondly, it also solidifies the fact of just how robust the 650 platform is, as there hasn’t been a single mechanical failure throughout the first season, and the same bikes are being used for the second season. And that speaks volumes of what the 650 platform is capable of. On that note, Royal Enfield, ‘When is that media race again?’