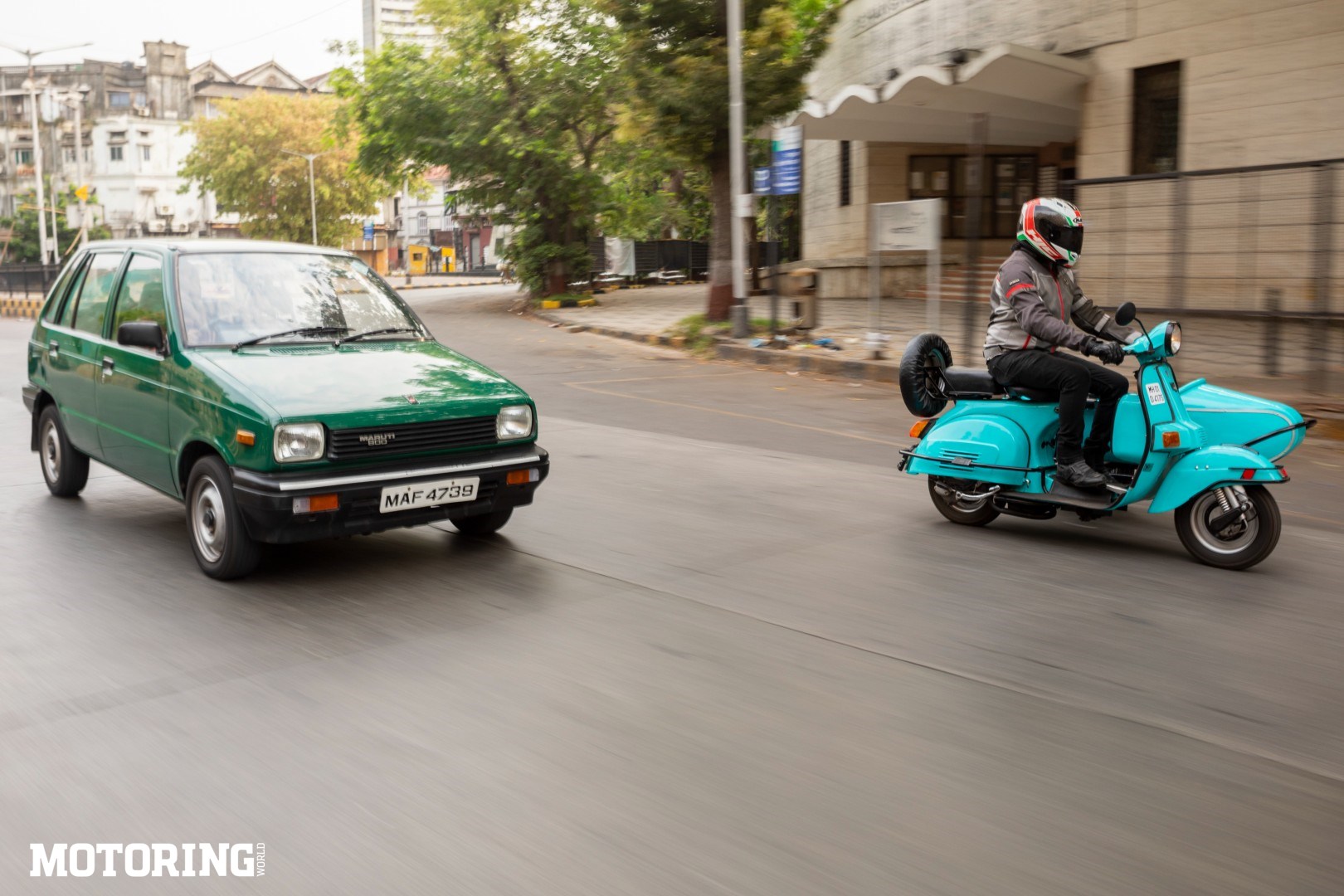 Have you ever had the thought of going back in time and living in the ‘80s, while being of the same age (probably a couple of years younger) that you are now? I have, not just once, but multiple times. And my argument for that is mainly because our world was a much simpler place than it is today. Back then, photographs were captured on film, there were only two genders, smartphones didn’t exist, music had meaningful lyrics, the term ‘rat race’ was only a reference, rather than a way of life, and so on and so forth. Subsequently, from an automotive enthusiast’s perspective, for me, the ‘80s are reminiscent of times when the roads were a lot less crowded, motorists were more responsible behind the wheel or handlebar, and when cars and bikes were a lot simpler. 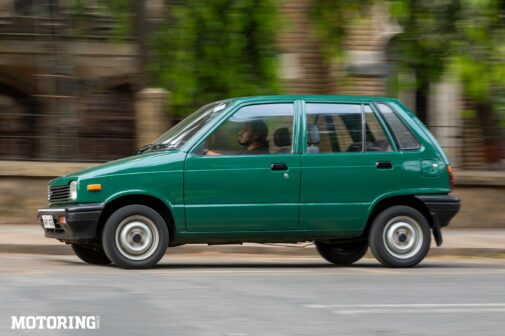 Recently, early on a Saturday morning, I found myself daydreaming and having the same thought yet again, from behind the skinny steering wheel of a lovely green Maruti Suzuki 800. Windows rolled down with one arm on the window sill, comfy fabric seats to soak the sweat, and no stereo to entertain, but the sweet purring of a finely-turned carbureted engine. Cruising towards the old Bombay side, I was accompanied by yet another vehicle that is as iconic as the 800 itself. Gleaming in a bright pastel blue shade, it was a crisp-looking Bajaj Chetak that has been recently restored from the ground up. And for brownie points, this one had a sidecar as well. Can’t blame me for having gone into an ‘80s nostalgia dream, can you? 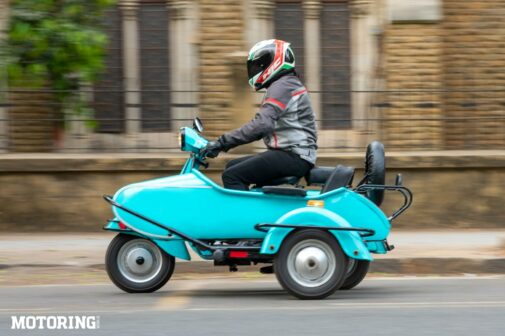 Now, you might have understood from the cover that April is our Car vs Bike special, and what could be better than spending the morning with these veterans of our automobile history. From the time I thought of these vehicles, I knew that a story just had to be done with them. On that note, let’s start with the beginnings of these machines, shall we?

The Chetak’s story goes back to the year 1972 when Bajaj Auto had launched the scooter, which soon became a household name for the Indian middle-class, for the next two decades. While the Chetak got its name from the famous horse that King Maharana Pratap rode, the scooter was based on the Italian Vespa Sprint. Powered by a 145cc two-stroke motor that was later replaced with a four-stroke mill, the Chetak ushered in a new era of mobility and became very popular across the nation. Back then, the Chetak rose to become the first two-wheeler or even a family vehicle, which is why it was also sold with a sidecar. The popularity rose to such a point that people were willing to wait for several years for delivery after booking one. While Bajaj Auto was enjoying the monopoly of its much-loved scooter, Hero Honda made its entry into the country with the CD 100, which slowly took over the Chetak’s throne. The coming years saw the spawning of more motorcycles, followed by gearless scooters, which brought the Chetak’s demand further down, which led to the company phasing it out in 2005. Although Bajaj made the shift to motorcycles, the Chetak was manufactured and sold for 33 years, which is a fantastic feat in itself. The one seen in these images has been reconditioned to perfection by YC Design of Mumbai, which specialises in two-wheeler restorations.

The Maruti Suzuki 800, on the other hand, was manufactured in India from 1883 up until 2014. While the first generation (codenamed SS80), was based on the Japanese 1979 Suzuki Alto, it was sold for three years before being replaced by the one you see here. The second-generation model (codenamed SB308), had received a major facelift in terms of design. However, it continued to have the same powertrain, which was a 796cc inline-three motor mated to a four-speed gearbox. Later iterations received further cosmetic updates, features, and modern powertrains, but the underpinning pretty much continued to remain unchanged. The significance of the Maruti Suzuki 800 was huge at that time, as it was compact, relatively spacious, affordable, and easy to maintain, and it was soon considered the first people’s car. It was such a success story that out of the 28 lakh 800s manufactured, 26 lakh were sold in the domestic market, the rest being exports. With a production term lasting over 31 years, the Maruti Suzuki 800 was the second-longest production car in the country, after the Hindustan Ambassador. Keeping the wheels rolling is this gorgeous-looking 800 of the model year 1986 (of the first lot) that is owned and maintained by Selvin Jose.

Now, the 800 was introduced at the time when the other car options were the Ambassador and the Premier Padmini. Compared to its length and width, the 800 was relatively spacious on the inside. The main attribute goes to the front-wheel-drive layout that allowed a lot of space for the passenger cabin. The interiors back then were rather simple, featuring part-door pads, and part-body coloured paint. The dashboard was moulded out of plastic that housed the instrumentation, air blower vents, a blank space to retrofit a stereo, and a glove box to keep the vehicle documents and other small bits. The boot barely offered any space, but the rear seats could be dropped down, which allowed bigger items to be stored.

But none of that matters once you start driving that cute little thing. Despite its age, the 800 was quick on its toes while being absolutely smooth. Selvin said, once enough momentum has been achieved, all one needs to do is slot in the fourth cog and cruise away in motoring nirvana, which is exactly what I did all the way to town. The compact dimensions mean that there is barely any weight to begin with for zipping through traffic. Ride quality is still fantastic and so is the handling. I couldn’t have been happier after the time that I got to spend in the 800’s driver seat, as it was a nice throwback to when everything about cars was mechanical and unadulterated. 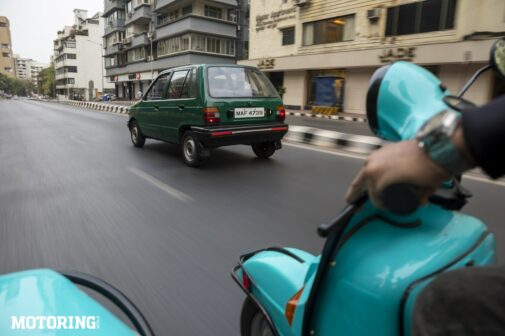 The same kind of happiness presented itself when I hopped on the bouncy, soft-sprung seat of the Chetak. Tuned to the right note, the scooter would start-up happily on every first attempt. I have ridden geared scooters on very few occasions, and one with a sidecar only once before, so naturally, it took me a bit of a while to get accustomed to the riding style and ergonomics. As with all geared scooters, I had to sit on my one butt cheek to be able to operate the rear foot brake with ease and without cramping my leg. Also, slotting the scooter in the first gear is quite a stretch for the left wrist, followed by guessing which gear is where. But, nothing comes close to the experience of riding one, especially with a sidecar. From approaching a speed breaker, to cautiously checking the left side for enough space, to constantly fighting with the handlebar to keep the scooter in the straight line, all this requires undivided attention. It can be a handful, but it is an experience that’s worth every bit. 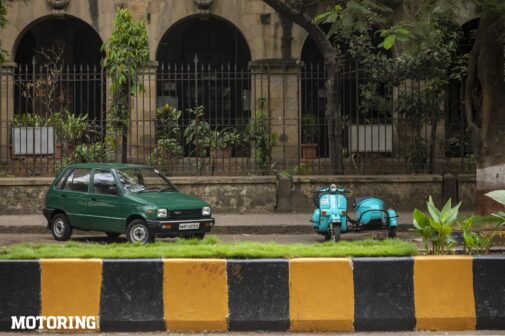 After clicking pictures and riding around iconic places in South Bombay, we settled down at an old Parsi eatery to answer the cries of hunger erupting from our stomachs. The Chetak and 800 were happy to pose outside, drawing a small crowd every once in a while. It was a morning spent well with the forerunners of our Indian auto industry, and the origins of what we drive and ride today. Pondering on that, I was back to daydream yet again, back to the ‘80s, this time with these two lovely icons on a similar morning like this one.