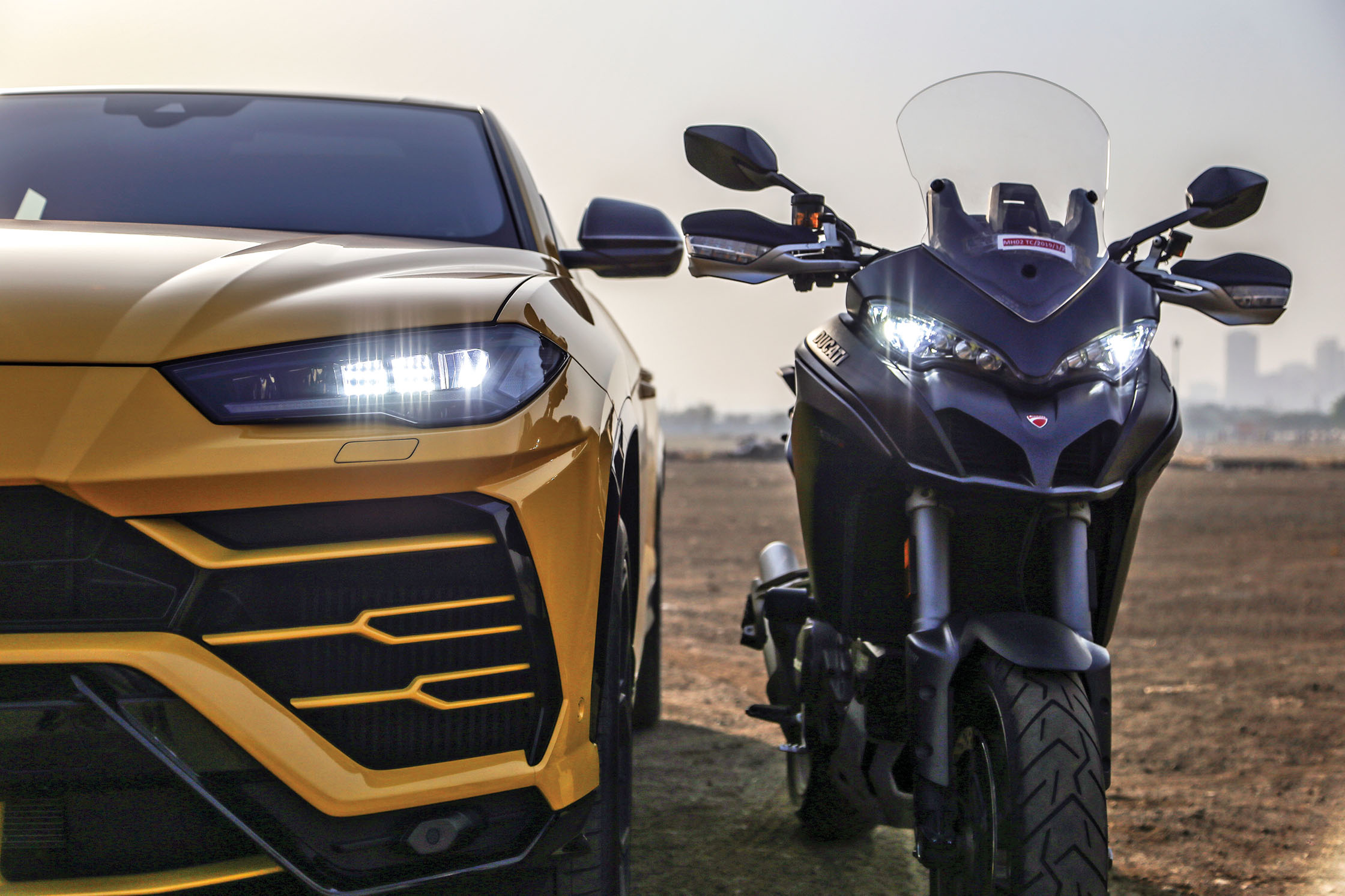 Have you ever imagined where the world would be without hedonism? Contrary to all religious forms of abstinence in the hope of a better afterlife, hedonism promotes the celebration of worldly pleasures. Because why wait until you’re nothing but a cadaver to simply have an absolutely rollicking time? There’s no denying the sense of fulfilment that indulgence entails. It may not induce any lasting happiness or peace, but just for that moment in time, you’ve got dopamine flowing out of every molecule in your body. Can you really deny yourself that? Can you really condemn the people that experience this fleeting pleasure without feeling just a wee bit jealous? The most pious amongst us will scoff at the idea and turn their noses skywards in absolute judgement. Yet intrinsically, even they feel tinges of bitterness swelling within. So why, then, must we not give in to these desires at some point? If they’re already there, then maybe on a primal level they’re also what we need. Some may call it a sin, but that’s only because they already see it as a temptation. 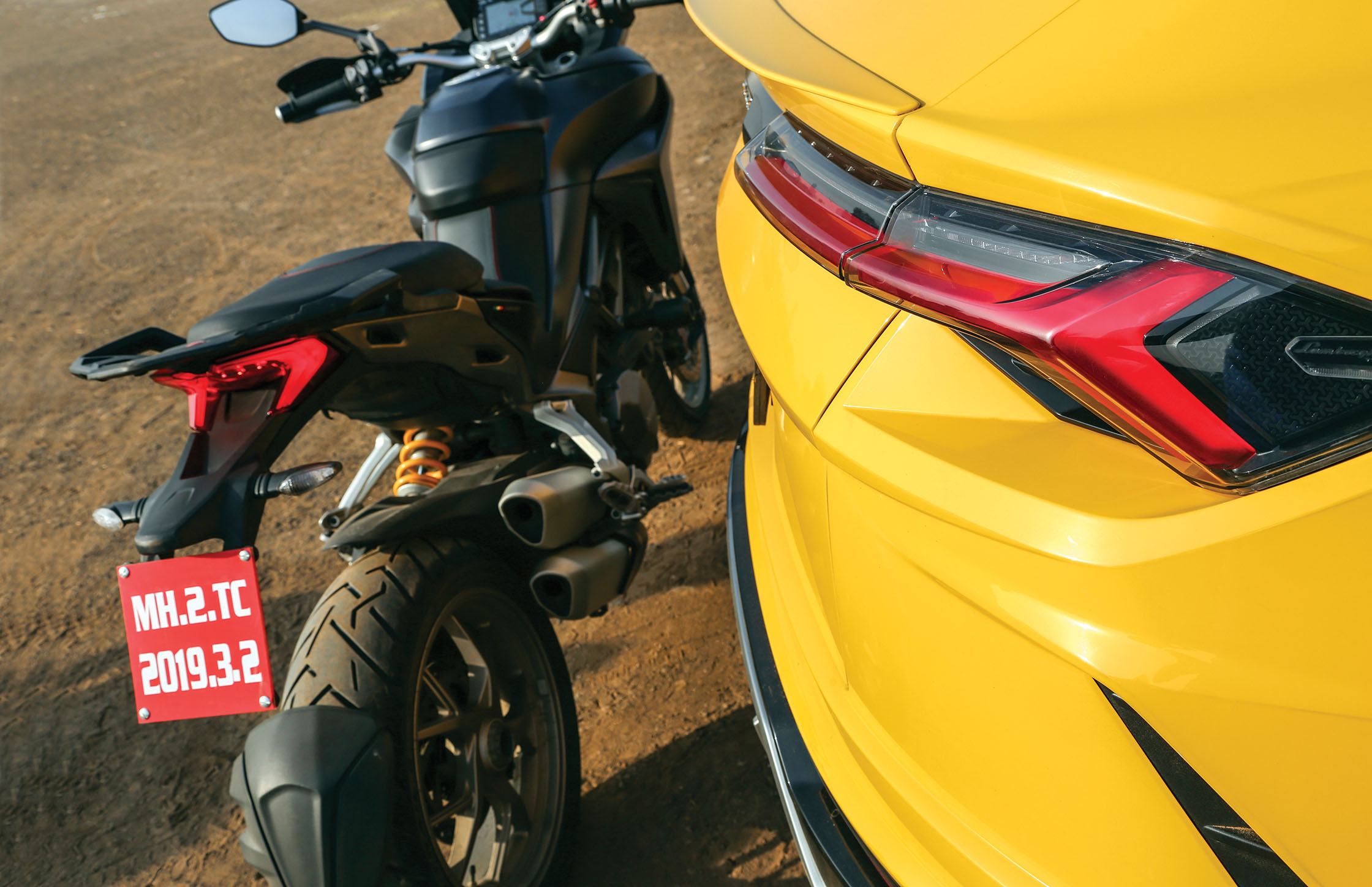 Italy is no stranger to hedonism. Despite it being the country of origin to a faith that inherently condemns succumbing to temptation, the most beautiful forms of overindulgence emerged right here. Rather ironic, don’t you think? Sure, the Italian Renaissance culture spawned creations that are doused in beauty beyond compare. But it came as a form of constructive rebellion that shunned the intellectual restriction of the Dark Ages. This drive to create forms and philosophies that united culture, engineering and art put Italy in a realm of its own. The Renaissance era may have ended in the middle ages, but it is now woven so deeply into the Italian moral fabric that not a soul can escape it. And why must we? It is a celebration of originality that is far from being restrained by the guidelines that govern the rest of this world. It is the reason Italy has earned the title of being exotic. It is why Italian automotive creations surpass expectations. It is why you are here, reading this right now, today. 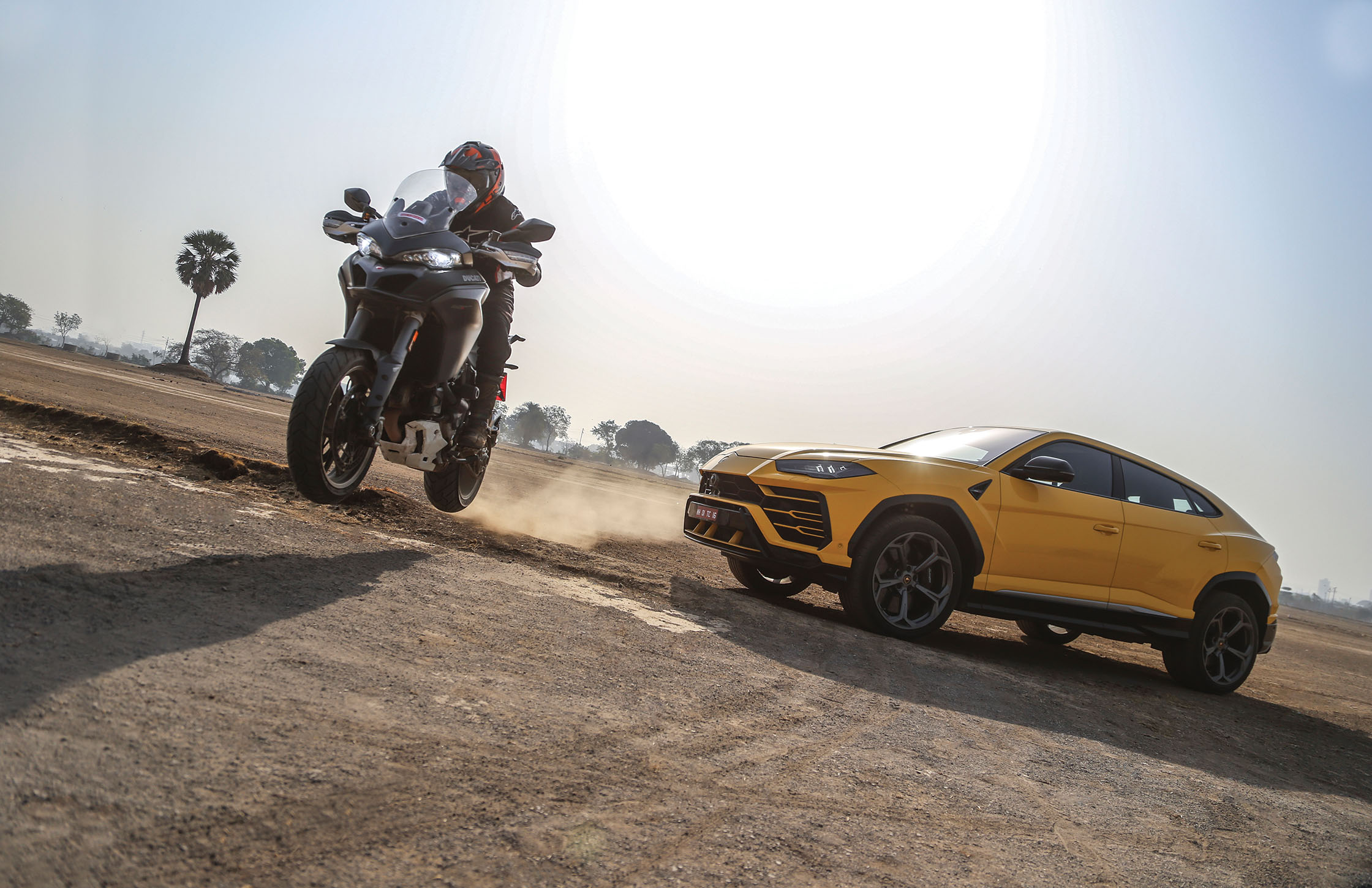 It would appear that Renaissance blood runs deeper than water in some places. Masterpieces are forged in the crucibles of Bologna, and the world will forever be grateful for the creations they send forth. The words Ducati and Lamborghini have resonated through the ages in chorus with the term ‘rolling sculptures’. The sacred unison of uninhibited beauty and visceral performance is an accolade few others can bear an honest claim to. These vehicles sit close to the pinnacle of the hedonistic desires of any automotive enthusiast, whether they consciously admit it or not. And the reason that posters of Lamborghinis and Ducatis will continue to be draped across the walls and screens of proper red-blooded men and women is because they continuously, and very successfully, manage to push the boundaries of the exquisite and outrageous, effortlessly. 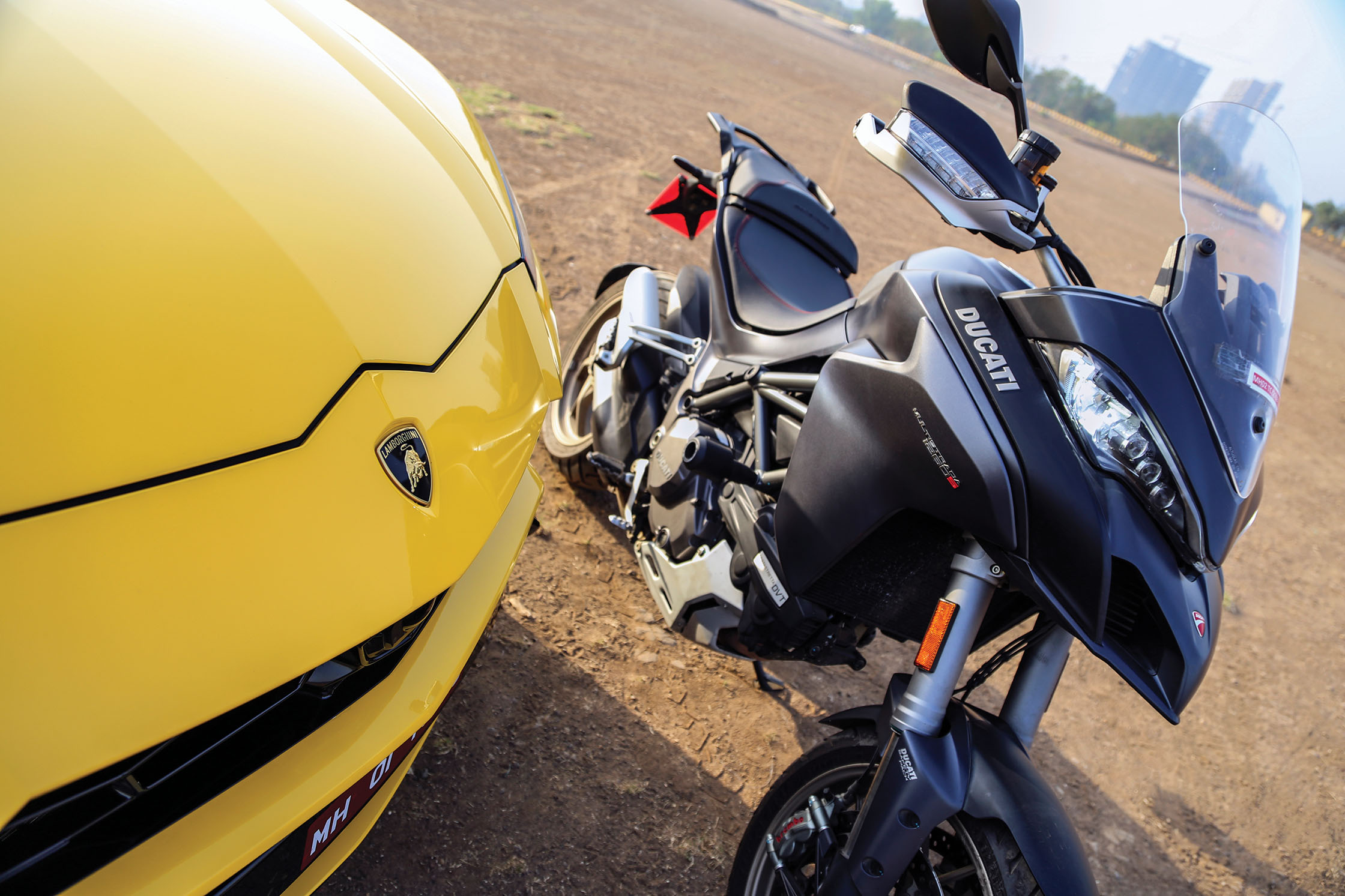 As we descend into the dusty arena, let’s look at why these two gladiators have been chosen for this skirmish. Aside from sharing a common birthplace, they were both built with similar ideologies — both are stupendously large for what they each are, both have outrageous performance, and both are expected to get a little dirty (strictly off-road speaking, that is). Neither is practical, frugal or even remotely sensible. Both these beasts are here for absolutely unabashed and unfiltered extravagance. And that’s exactly what we did with them; much to the disappointment of the folks at Lamborghini India. But as the millennial crowd these days keep saying, ‘You Only Live Once’; YOLO for the more torpid individuals. 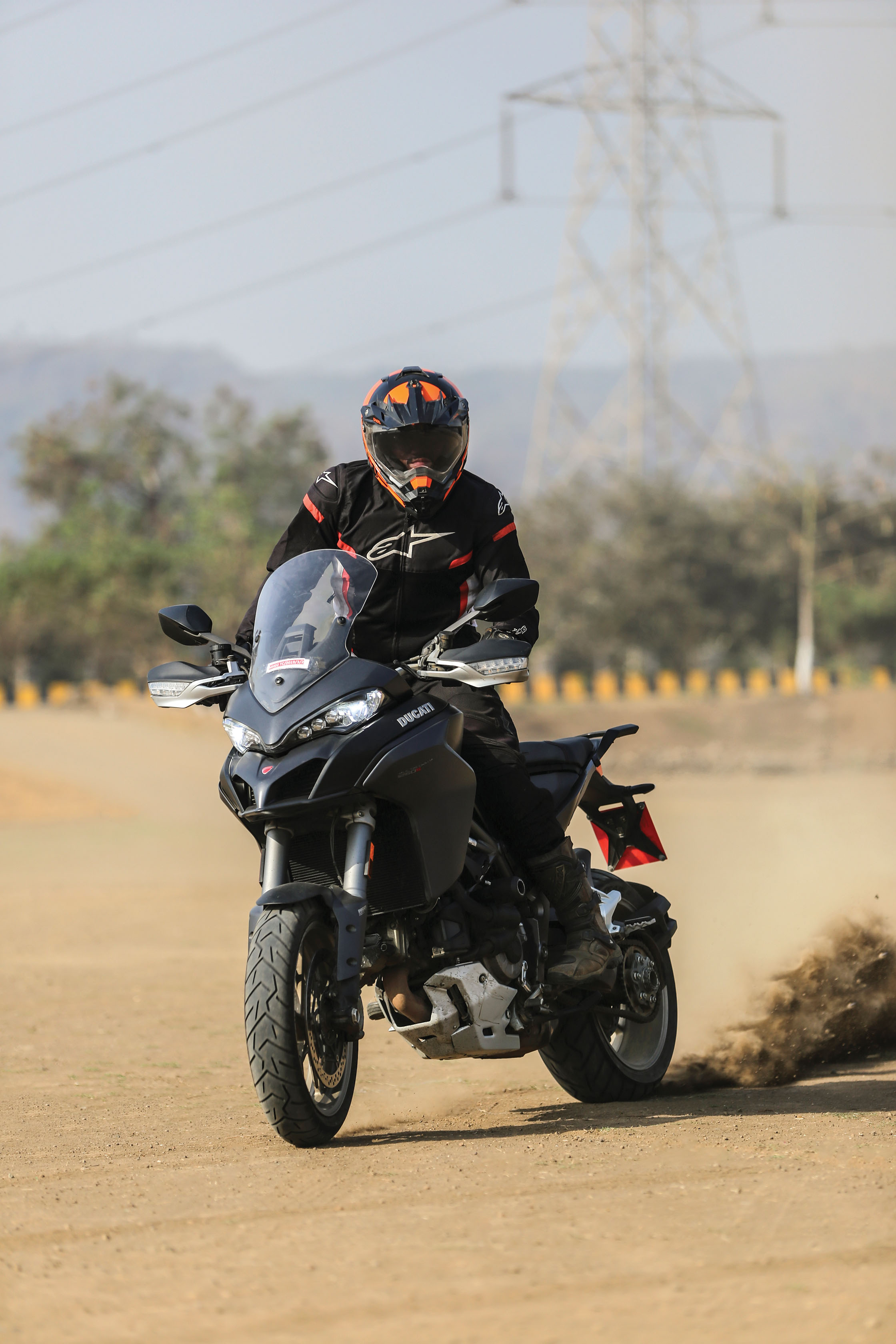 Before we dive into the lunacy that is the Urus, let’s just take a quick swig of Ducati’s twin-cylinder ADV sorcery. Now the Multistrada has always been an extraordinary machine. Ducati has somehow managed to carve intimidating into beautiful. The Multistrada has been revered since its inception simply because of how it chooses to be frighteningly quick on its feet, despite it probably sharing its stature with a freight train. But it is a beautiful freight train, one that will slice right through a house while simultaneously declaring to the universe that it has now claimed you for its own. This is a motorcycle that will consume you by its ease of operation. As the velocity slowly piles on, your inhibitions about its proportions will slowly fade into oblivion; this is the subtle beauty of Ducati’s engineering.

That additional 60cc of displacement from the older Multistrada has unleashed a monster that will suck out every drop of adrenaline in your soul. The torque doesn’t just simply build like it would in a normal motorcycle; it will hit you like a meteorite. As you sit there mesmerised by the angry growls that burst forth from this Testastretta L-Twin, all you must do is hold firmly onto the handlebar. Have enough faith that sheer divine intervention will get you exactly where you need to go. It’d be hard to imagine that anyone with a shred of sanity would even venture beyond the tarmac laden confines of the universe. If you choose to ignore the voices in your head, you’ll soon discover what madness lurks in Enduro mode. The electronic aids and adaptive suspension of this motorcycle holds intellect beyond you and I. Once you fully absorb the extent of this motorcycles prowess, you will embrace its darker side. The wonderful part is that it has many. But Goliath waits patiently as we speak. 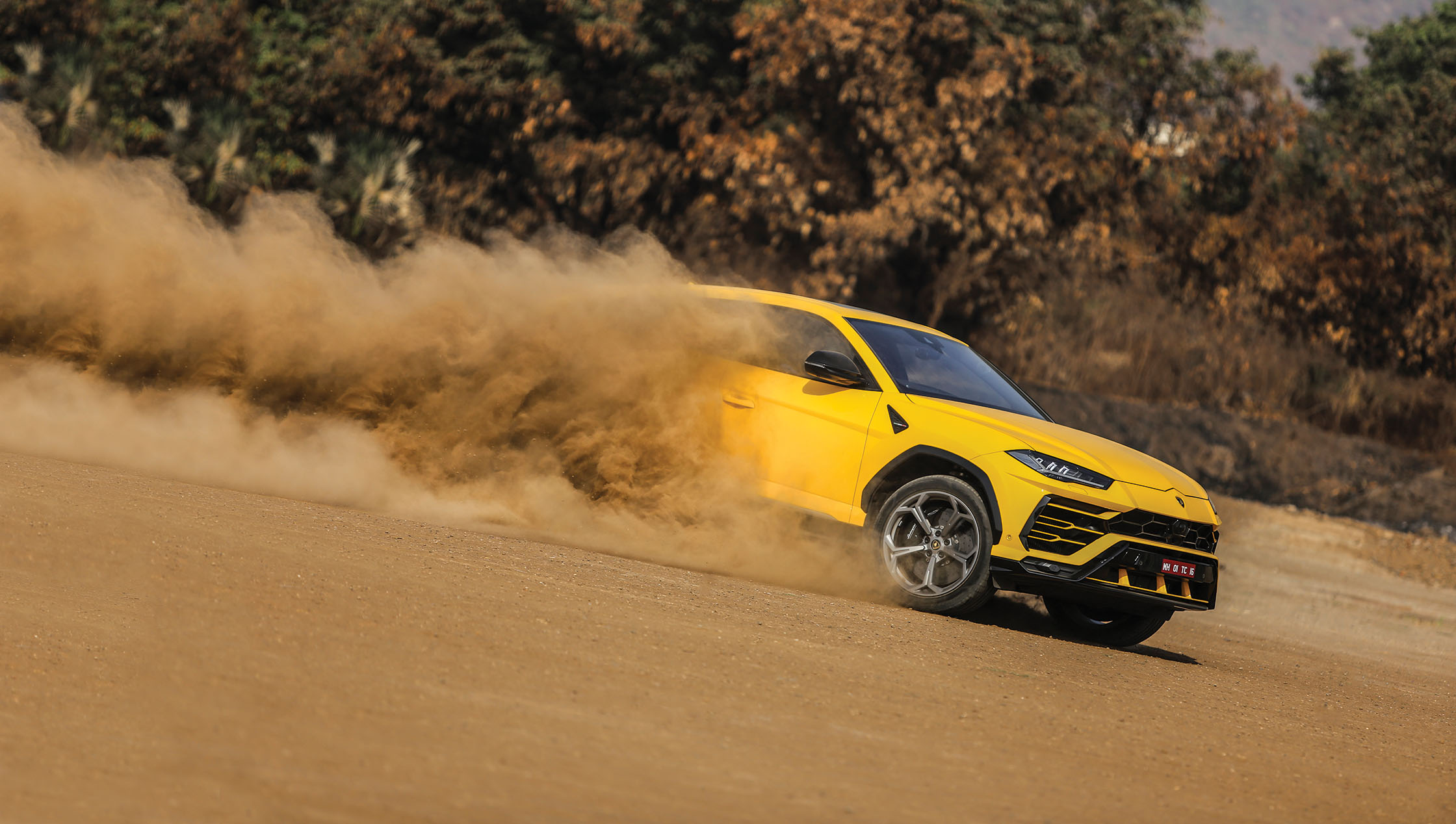 The Urus is arguably one of the most wildly outlandish and frighteningly quick SUVs to ever exist. That is, of course, if you’ve conveniently forgotten about the Lamborghini LM002 that breathed hallowed flames from its marine-derived 7.2-litre V12 engine once upon a time. Aside from being a descendent of it, the Urus is more than just an SUV. While it shares its platform with the likes of the Porsche Cayenne, the Audi Q7 and the Bentley Bentayga, it simply adds a dash of ridonculous to the blend. This behemoth charges forth by unleashing 630 glorious horses through its AWD system. It is a system that is fettered into usability via an 8-speed automatic gearbox. Aside from looking vividly unique and gargantuan in proportion, it will seduce you with simply how athletic it is. The gigantic 21-inch wheels will deceive you. They create a sort of visual illusion that will not let you fully process that there’s an entire 250 mm of ground clearance. It certainly took me by surprise. 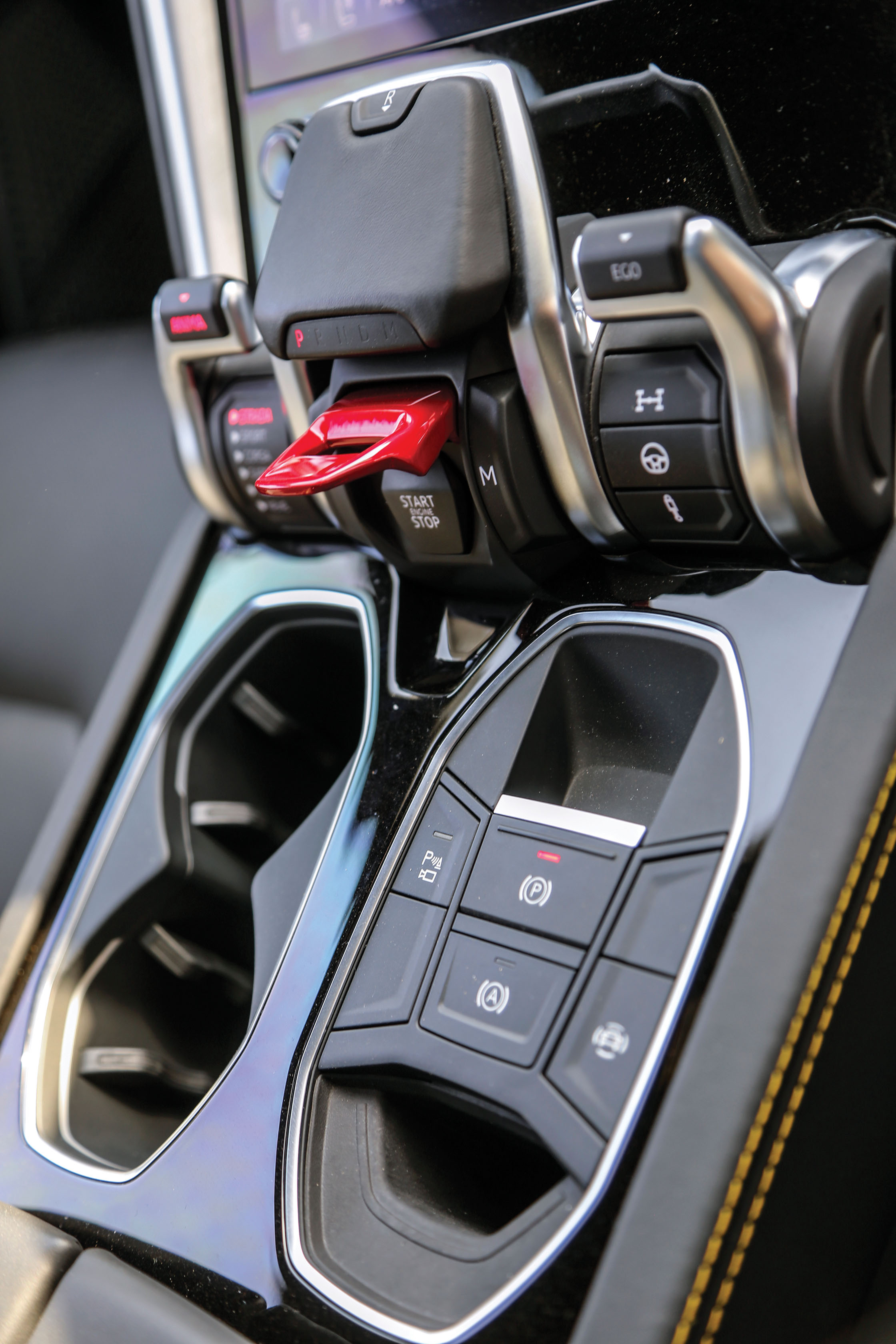 Now I’m not one to be supremely bewildered by the performance of cars. I often spend time with my organs trailing a foot behind me when I’m testing quick motorcycles. But a car that will give you performance similar to one of those, is aces in my books. Let alone the fact that it probably weighs the same as more than twenty of them. And the party tricks don’t just end here. As you step into the cabin, you’re greeted by what can only be described as a rather curious blend of luxury and aggression. It’s like sipping a glass of fine single malt that’s been infused with unadulterated meth. The styling elements from the cockpit of a fighter-jet have been ever so neatly integrated into the cabin of the Urus. From the mode selector that resembles a thrust lever, to the flip-up cover of the engine switch, this is a very special place to be. And all of this is before you’ve even heard the raw, guttural noises that ooze from the exhaust pipes when it’s in Corsa mode. 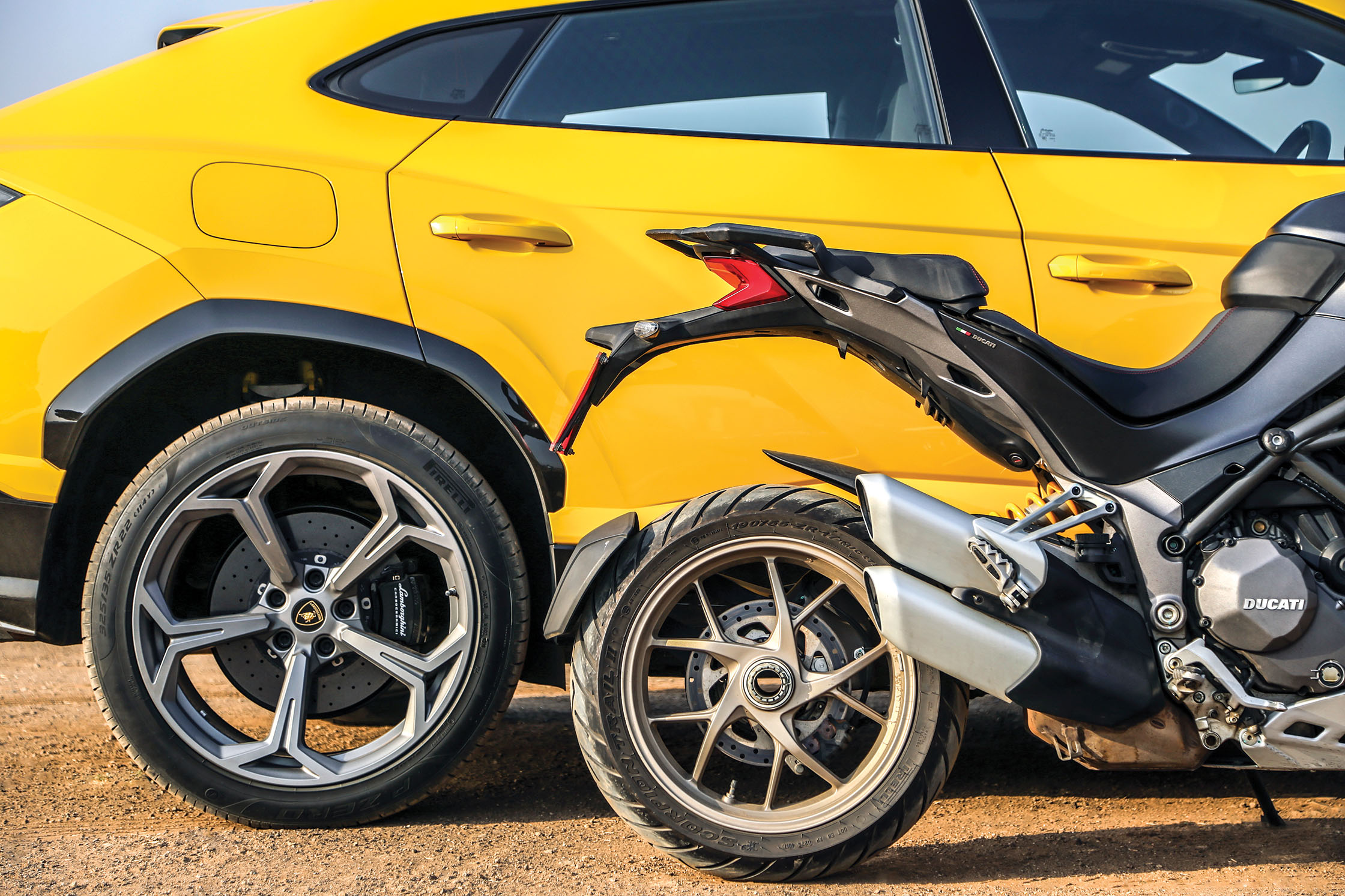 So why are we here, then? How have we gotten to this point? It’s probably because the Urus and the Multistrada 1260S are arguably the best specimens of an SUV and an ADV bike in existence. There is a mild form of sanity that underlies all the madness. Far be it for anyone to even remotely be able to resist the primal sensuality of these beasts. Both of them have been subtly tamed into absolute usability without missing out on any of the Italian flair. For a venial sin such as owning one of these, I’m sure even the pope himself would make an exception. For however long hedonism exists in this world, there’s no doubt that these machines will only change for the better. Stop with all the judgement, resistance and denial. For just once in your life, admit that it’s perfectly fine to be a sinner.