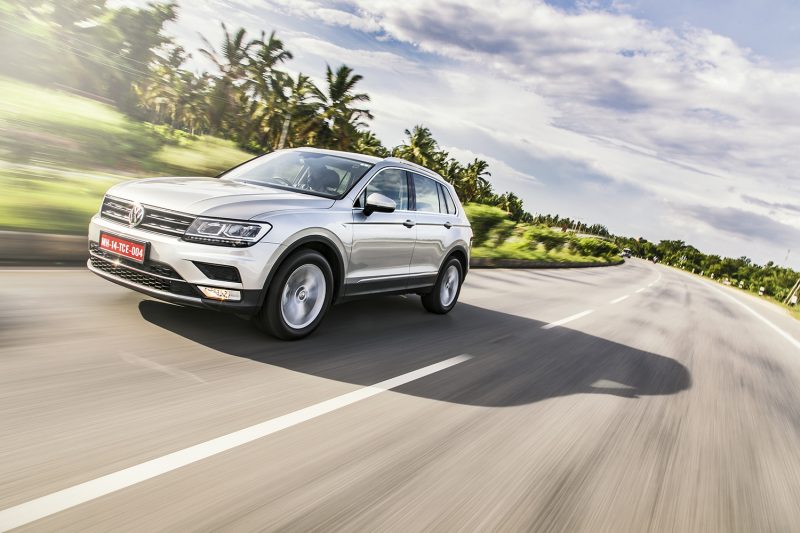 You won’t believe what the new Tiguan is named after. So far, I’ve always nodded in admiration at VW’s ability to name its cars after types of winds, even choosing to borrow from other languages if German failed to provide a suitable option. However, ‘Tiguan’ is a head-on collision between the German words for tiger and iguana. Why? Well, I didn’t recover fast enough to ask.

However, the Tiguan, thankfully, doesn’t look like a product of a biological experiment gone horribly wrong. In fact, it looks rather handsome in a very Germanic manner, and very decidedly a VW. If I were to sum up the way it looks in a single word, it’d be ‘decisive’. There is no uncertainty in its lines. Every panel looks firm and sharp, without looking matronly.

Why is it here, you ask? Well, there’s always space for one more SUV in our market, especially a good one. And the Tiguan does fulfil that requirement. It’s put together in a manner that every single person in its country of origin will be proud of. Everything on and in the Tiguan feels solid and built to last. There’s enough space inside for five people, though the boot did leave me feeling that at least two of those people will probably have to pack light. However, the boot opens with a movement of your foot under it in case your hands are full. Pretty cool feature, that, though I wonder how someone in high heels will fare at the task.

Once they pick themselves off the ground and move inside, though, the Tiguan will simultaneously impress and leave eyebrows furrowed. The interior is an all-black affair and is a bit too staid to widen eyes and draw deep admiring breaths. That you recognise switches from models way down VW’s lineup doesn’t help. However, the saving grace is that there are enough and more features in here that will keep you occupied.

Also, the panoramic sunroof really changes the whole atmosphere inside the cabin and it’s probably my favourite thing about the Tiguan. However, more than anything else, what left me intrigued was the drive mode selector aft of the transmission manipulator (can’t call it the gear lever in an automatic).

The Tiguan comes with what VW calls the 4Motion system, an all-wheel drive setup with four driving modes – normal, snow, off-road and off-road individual. That a city-crawling, mall-hopping SUV should come with such focus on off-roading came as a bit a surprise to me. But I suppose that’s what being built on VW’s new MQB platform allows you to do. But more on that later.

Driving the Tiguan, as a fellow motoring journalist pointed out without even driving the car, is a familiarly VW experience. The steering is light and gets the job done. The motor is grunty and smooth, and gets the job done, too. And the same goes for the 7-speed DSG ‘box, of course. What I was most thankful for, though, was that brakes got the job done better than anything else. That’s all thanks to the 2.0-litre, 141-bhp four-cylinder motor that really hauls the Tiguan down the road at a respectable rate of progress. Low down, it is a bit sedate, but once past roughly 1800 rpm, it takes off. Sport mode gives you an extra 500 rpm at the redline, while the paddle shifters are pretty good at letting you pretend to be an F1 driver.

In the city, the Tiguan is pretty manageable, though it really impresses out on the highway, its stability and reassuring power delivery taking charge of effortlessly covering long distances. The seats are comfortable and the ride quality is fantastic which adds to the long-run experience. And by my initial unverified reckoning, the Tiguan should easily do 500 km on a tankful, too. Given that there were all of three corners in the 300 km that I drove it, I can’t convincingly comment on its ability to take corners. However, given that it’s stable and comes with ESP, I’d be willing to bet that you won’t fly off any cliffs.

I did take it a bit off the road, though, and that is where the Tiguan surprised me again. It wasn’t an extremely off-road surface, I must admit, but the new VW flew over the wet and muddy trail in off-road mode with a composure that I did not expect from it. Enough for me to start looking for the ideal spot to jump it. I’m sure VW will be thankful that I didn’t find it. I don’t expect the Tiguan to win any hardcore rallies, but I’m keen to see how it does at harder off-roading. I doubt those tyres will help much, though, being as road-biased as they are.

Safety-wise, the Tiguan comes with six airbags, ESP, ABS, self-sealing tyres, hill hold, hill descent control and an active hood. The last one is for pedestrian safety and raises the bonnet by a few inches so the unfortunate person can land on a slightly more forgiving hot metal surface. How very considerate.

Now, I don’t know about tigers and iguanas, but the Tiguan is a very handy mix of great road manners and mild off-roading capability. At Rs 27.68 lakh for the CL version and Rs 31.04 lakh for the HL one, both prices ex-showroom, Mumbai, the Tiguan is definitely worth a look. It has the potential to be a great family car or even for those mildly adventurous souls looking for a car that matches their lifestyles. Just don’t go around explaining the name to people, that’s all.