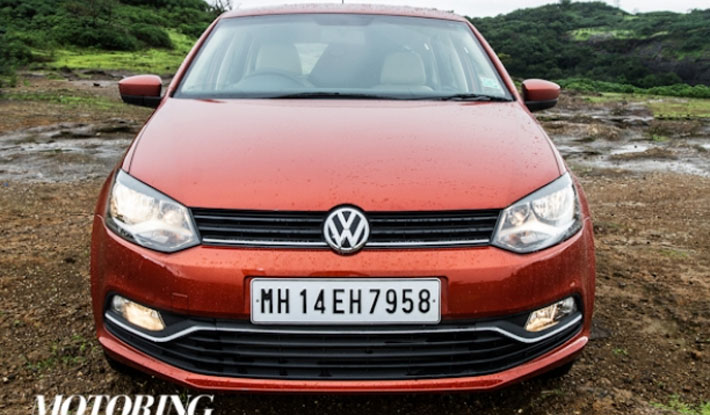 If something works well, there is no need to change it. We’ve all heard it said. But I don’t agree. Why? Well, if that were the case we wouldn’t have had power steering, seat warmers, and adjustable suspension. We wouldn’t have had twin-clutch gearboxes and electronic fuel injection. We wouldn’t have had variable geometry turbochargers or launch control. Hell, we might have still been using horses to carry us around. Ever tried to pull a Scandinavian flick in a horse cart? Isn’t quite as much fun, I’m sure.

So yes, change is a good thing. Sometimes it doesn’t come in big packages, but it’s good nevertheless. This seems to be what VW seems to believe too. That brings us to the car in question – the new Polo.

What has changed? Let’s get to the minor bits first. There is a new bumper, both front and back. The front end gets some chrome bits and a redesigned air-dam and new foglights. The rear gets a new lip. That’s it. The insides remain largely the same except for a new flat bottomed steering wheel that I absolutely love. There is also a new dispay for the trip computer in the instrument console and dual tone colours for the dash. The infotainment system is the same as before and so are the seats and everything else.

Now the important bit – the new motor. The Polo’s 1.2 litre TDI motor has bowed out and in its place is a new 1.5 litre turbodiesel. It is essentially the 1.6 liter motor, but with a smaller bore. The motor makes 90 bhp (4200 rpm) and 23.5 kgm (1500-2500 rpm)or torque. What I really like about this motor is that unlike the older diesel motor, the 1.5 TDI is not very laggy. It has lots of low down torque and pulls cleanly from as low as 1000 rpm. However, this comes with a tradeoff. The power curve tapers off as you pass 3500 rpm and post 4000 rpm, the motor is pretty much dead. This means that the car takes 13.3 seconds to hit 100 kph. This is much quicker than the older motor, but after driving the GT TDI, seems inadequate. Top speed too isn’t all too bad with the new motor pushing the car to 174 kph, again faster than the 1.2 TDI.

The new Polo is also vastly better in terms of engine nose. I remember the old diesel being pretty agricultural and loud. Even at startup and idle, the motor used to make a lot of noise. This has been addressed and VW has done a very good job of limiting cabin noise.

Speaking of noise, VW has tweaked the suspension too. None of that crashiness from the older Polo is there anymore. That said, it still handles pretty well and can better most of its competition on a twisty road. And with those new Apollo Alnacs, grip too has improved a fair bit.

The Polo has always been one of our favourite hatchbacks. It is well built, it handles well, the ride is among the best and with the right motor, it can give larger cars a run for their money. The 1.2 litre diesel has always been a bit underpowered. This problem has been addressed by this update. With the new motor and the facelift, the Polo 1.5 TDI will cost between Rs 6.27 lakh and Rs 7.37 lakh (ex-showroom, Delhi). The same old 1.2 MPI motor is available as well. This will cost between Rs 4.99 lakh and Rs 6.07 lakh. The GTs meanwhile will be Rs 7.99 lakh for both the TDI and the TSI.

The Polo then doesn’t have a lot of changes to list out. But the new motor itself carries more weight than any cosmetic updates or added features. And together with a price that remains pretty much unchanged (the base diesel variant is only a few thousands more expensive than it was before) we like what we see. A better motor for pretty much the same price? Now that’s the kind of change we like.