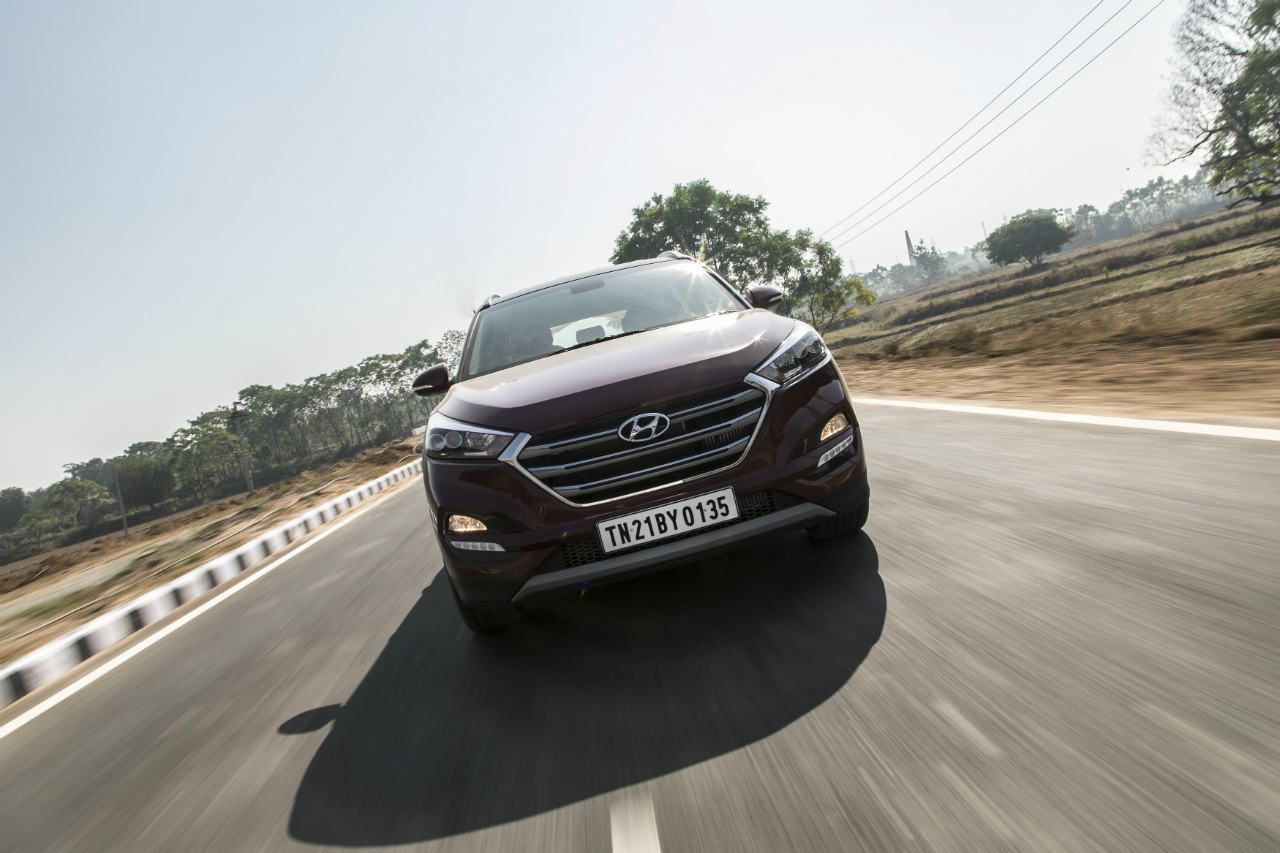 There’s a sense that Hyundai can do no wrong at this point in time. With each successive launch, it’s just raising the bar higher, and it’s giving those bigoted, narrow-minded reviewers (people like me, in other words) less to complain about while at it. This, of course, means that you can pop down to your nearest Hyundai dealership and cruise home in any one of its cars without being concerned about people calling you a half-wit and a soccer mom-car driver. So there’s no denying that it’s come a long way in a short span of time, and the new Tucson, I believe, is a line drawn in the sand after which Hyundai can, without a doubt, finally take a snooze and be happy with what it’s achieved in India.

Two Up
You’d be shocked to see the leap Hyundai’s made in terms of design with the Tucson. Where the first Tucson was downright disheartening to look at, the third-gen variant you see here is a direct nod to the aesthetically-inclined Hyundais we know of late. A slew of flowing lines and dramatic cuts dominate the body, which make it look fabulous, if you ask me, especially for an SUV. You get the sense that Hyundai’s put in a lot of time and effort with this one and it’s lovely to see on the road. The rear’s still got a hint of the Alfa Brera, though, even if it’s not as pronounced as in the i20. That’s fine, really – call it creative liberty.

Where Hyundai had a chance to step it up a notch but didn’t is in the interior. It’s a superb place to sit in, mind, but if you’ve been in any other new Hyundai, especially the Creta, it’s hard to not notice that there’s been a butt-load of parts-sharing. The only time this becomes a problem is when you’re casually browsing through the Hyundais in a showroom and there’s a Creta and a Tucson side by side. What this does mean, however, is that the fit and finish is top notch and if the way our long-termers have been fairing is anything to go by, there’s a good chance that the Tucson is built sturdily enough for even the most ridiculous misuse (something which we may or may not be guilty of. Okay, we may be…). To top it off, the second row of seats is immensely comfortable and there’s enough space for a dog or two at the back.

Hyundai’s even got the features end of things covered by equipping the Tucson very well. To that effect, there’s stuff like auto headlamps, airbags, a reverse parking camera, tilt adjust steering, Hill Hold, Hill Descent Control, driving modes, and plenty of other usual suspects, so you don’t have to worry much there, either.

Where it excels, and I mean seriously outdoes expectations, is when you get the thing moving. Hyundai will sell you the Tucson only with a front-wheel-drive format for now. An all-wheel-drive variant is expected next year, but for now you can get it in petrol and diesel options with a six-speed auto and six-speed manual transmission to choose from. The one I drove – a diesel with an auto ‘box – is, for all intents and purposes, the one that’s likely to sell the most, so I’ll focus on that. For starters, you can barely tell the thing is on, so hats off on the sound insulation. It’s a smooth drive thereafter, with more than enough power being sent to the front wheels for most occasions. In fact, if you’re not too careful with your throttle input, there’s a high chance that the wheels will start squealing in protest once you get going. This, obviously, brought out the child in me and a significant amount of time was spent looking for an empty stretch of tarmac so I could further explore this mysterious lack of traction, much to the disappointment of my photographer. He does love his ‘tsk’s.

Getting back to it, though, there’s an ample amount of power across the rev range, and you’d have to be very perceptive to pick up on any lag, so that’s no deterrent, either. The gearbox makes commuting really simple and if you’re in a bit of a hurry then all you have to do is switch to sport mode and allow it to run through the gears with more urgency. It’s all very well thought through and there’s very few occasions when you can spot a hiccup.  The ride, too, is simply sublime and just what you’d expect of a Hyundai nowadays, but the roads we were on weren’t exactly representative of the pitiable condition most roads are in, really. At this point, I know it sounds like there’s really nothing about this car that needs to be revisited or re-done, but it genuinely does feel like that. Traditionally, Hyundais have struggled when you put its cars’ handling to the test, and while it isn’t extraordinarily good on the Tucson, it’s certainly the best any Hyundai’s been so far. Under hard cornering it’s surprisingly flat and stable, and the steering does a good job of transmitting what the wheels are up to, too. Surprised? Makes two of us.

It, however, is odd that Hyundai’s offering a steering adjustment setting that allows you to alter the weight dependent on what speed you’re doing, but only the manual gearbox-equipped variants get it. This is similar to the system offered on the bigger Santa Fe, but based on what I experienced on the diesel, it doesn’t really need it.

Just Do It
Put yourself in my place. If you’d just been in a car that drives as well, looks as good, and is as feature loaded as the Tucson, what on Earth would you possibly term a drawback? Hyundai’s even gone super aggressive with the pricing, as it starts from around Rs 19 lakh and goes up to around Rs 25 lakh (ex-showroom). That puts it bang in between the Creta and the Santa Fe and in the middle of some very interesting buying decisions. If it were me, though, I wouldn’t think twice. I suppose, then, that the only thing left for Hyundai to do is to put a board right in front of the display car that explains just how you’re supposed to pronounce Tucson. Wouldn’t want people saying they own a Tuck Son now, would we?