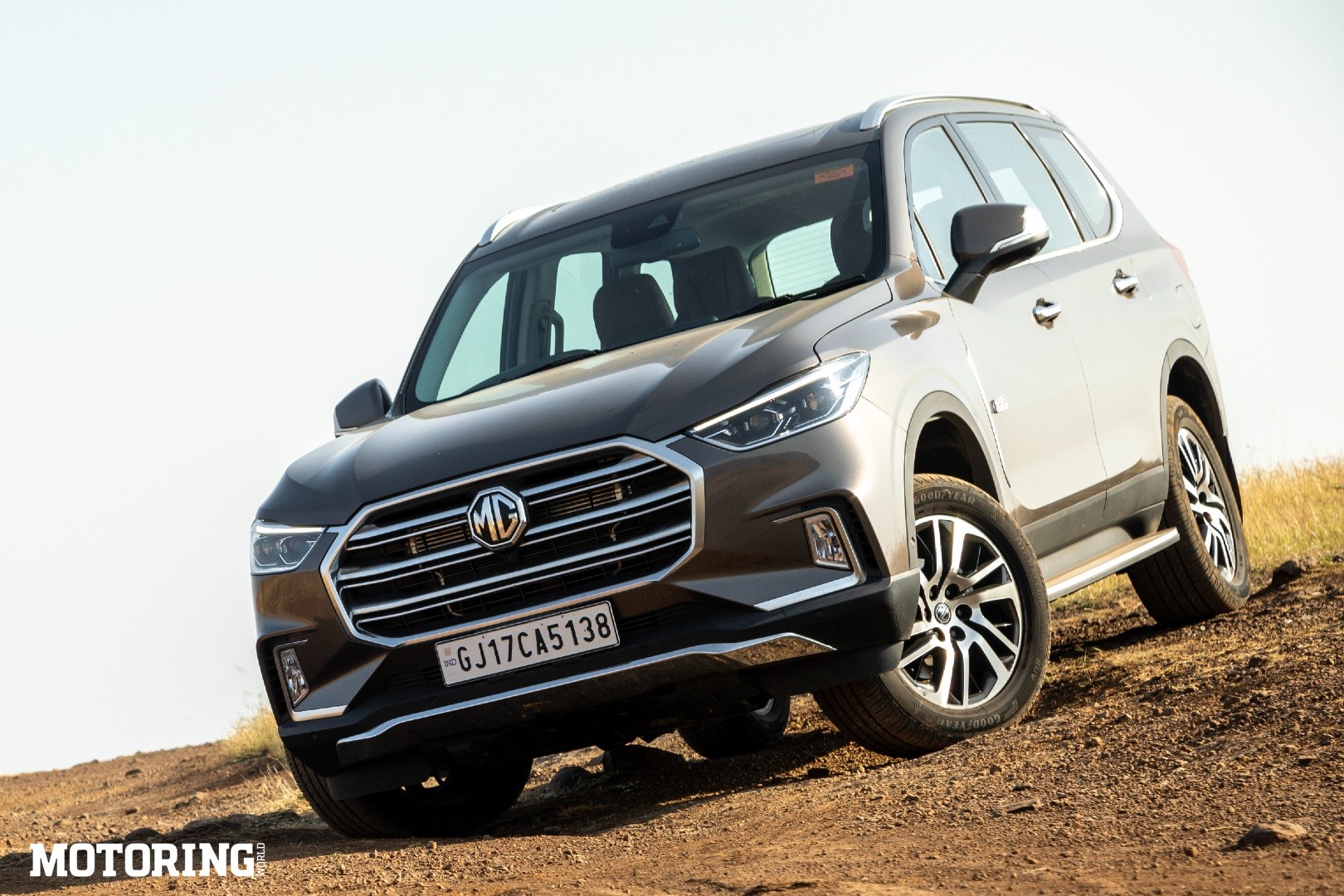 The MG Gloster has been around since 2020, and in that time, it’s made something of an impression. Its massive size, and that perceived value for money aspect have helped MG Motor India sell about 300 units a month of its full-size SUV. The brand has decided that the Gloster is due an update, but not much of one. After all, don’t try and fix what isn’t broken, right? So, for 2022, the Gloster facelift gets new alloy wheels, an update to its Level 2 ADAS tech, and more commands that can be understood by its big infotainment system. 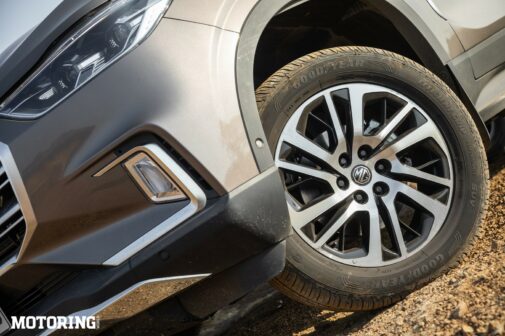 The new turbine-like 19-inch alloys add a dose of freshness to the package, but doesn’t really change the Gloster’s stance, profile, or appearance. They do look nice and sporty, though. As before, that chrome-heavy octagonal grille contrasts with the slim LED headlights to give the impression of something large, and the overall size serves to create a rather intimidating presence on the road. From the rear, the 2022 Gloster continues to look big, with those wraparound LED tail lights, the nameplate spelled out in a sizable font, and those four-piped exhaust tips. The new ‘Deep Golden’ colour suits the Gloster, adding to its stature. 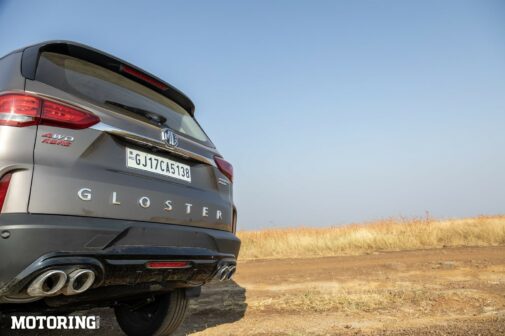 As I mentioned before, the overall lack of changes continues on the inside as well. The autonomous driving tech dues now get active lane assist, door open warning, and rear cross-traffic alert, while the infotainment system understands a total of 135 voice commands (up by 35), which is useful if you like talking to your car. However, that driver’s seat is still not the best in the business. Even with the option of adjusting it, lumbar support is excessive, and then because you’re sat so far forward, thigh support isn’t the best either. The ventilation function works well enough, but the massage the seat doles out isn’t all that relaxing, but it will keep you awake and alert. 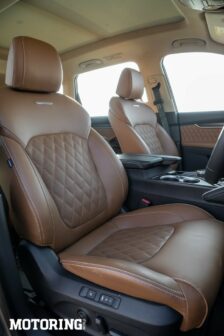 At least the view out is quite commanding, and you’re sat so high up (even with the height-adjustable seat in its lowest position) that you can see eye-to-eye with some smaller trucks. Space on the inside is, again, massive, thanks to the overall shape of the Gloster, and that panoramic sunroof gives rear passengers a sense of space you’d be hard-pressed to compare. The middle row is quite comfortable (though the captain’s seats here are also slightly over-bolstered) and the third row of seats are capable of seating two smaller adults, or children. Still, it’s best to use it for more boot space. 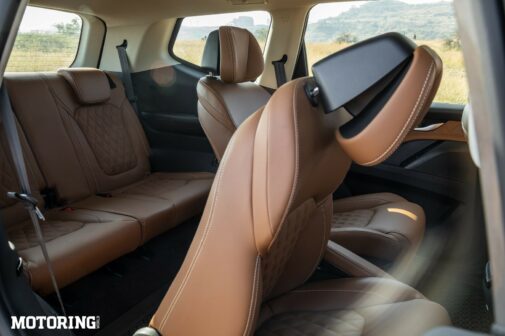 The Gloster’s proudly been the first one in the segment to get a twin-turbo diesel engine (at least on higher variants), and this 213-bhp 2-litre four-cylinder unit does feel quite powerful, but only when it’s past the initial 1600 rpm of its rev range. The 8-speed torque convertor automatic does a poor job of masking the weak bottom end, and isn’t that much of a smooth shifter besides. Driven in a leisurely manner, on a country road, the Gloster is in its element. Ride quality is more than decent, and even when the road gets rough, MG’s full-size SUV gets going without a hitch. 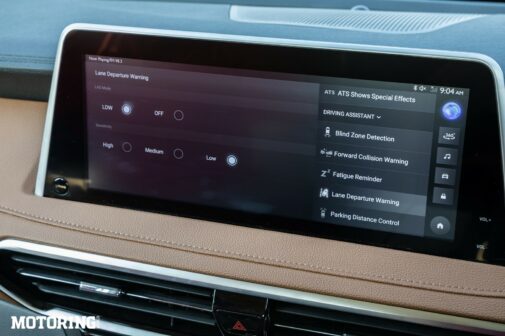 There’s a degree of overall stability when going off the beaten path thanks to the AWD system, but it doesn’t inspire the same level of confidence as its rivals. The Gloster’s handling characteristics are typical of its kind — there’s definitely body roll, and the light and numb steering makes this seem like you’re steering a boat (something I recently had experience with). This helps in tighter urban spaces, but the Gloster’s size doesn’t make for an easily parkable vehicle. The 360-degree camera helps, but it can’t compensate entirely. On the other hand, that intimidating presence, and commanding driving position come in handy on crowded roads. 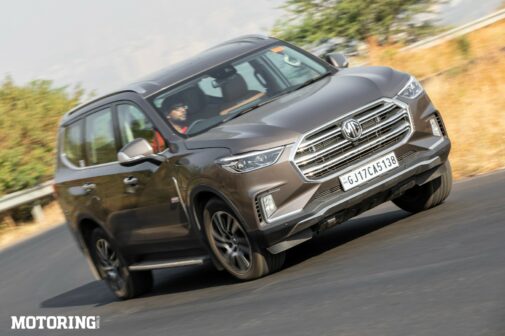 Overall, not much has changed for the Gloster, because nothing really has to. Sure, it’s Rs 1.28 lakh costlier now, but that has not altered what MG offers with this SUV. A large, value-for-money SUV, that’s comfy, yet menacing. It’s a left-field option that unsurprisingly (or surprisingly depending on where you sit on the fence about it) has enough takers, and will continue to do so.