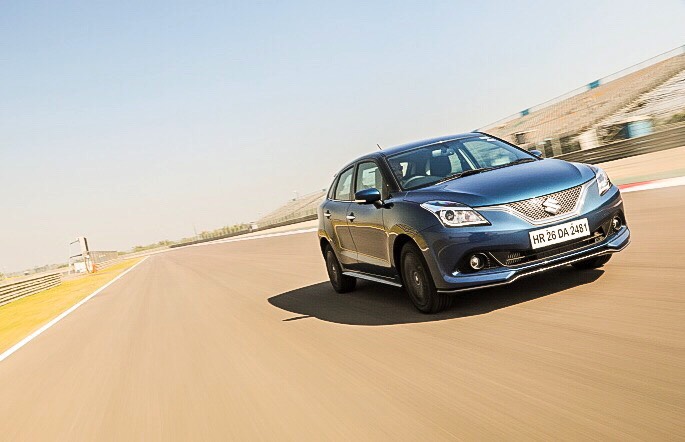 I’m not certain who’s been responsible for this sudden outpour of cars that are fun to drive more than anything else, but I’d like to take the time out to thank whoever it is profusely. It’s true that we’ve been fiddling away under the hoods of our cars for a while now in an effort to make them get to petrol pumps sooner, but the peace associated with getting the process done by a trusted hand appeals to the procrastinator in me immensely. That’s why cars like the Punto Abarth and the Polo GT TSI get so much space in Motoring World so often.

Now, there’s this: the Maruti Suzuki Baleno RS. Before I go any further, let’s be clear that Maruti wants RS to stand for Road Sport and not, well, anything else. As far as weak links go, though, that’s about where it ends. The RS is a collection of impressive numbers: 101 bhp, 15 kgm, 950 kg, a 1.0-litre 3-cylinder turbocharged direct injection petrol motor, four discs, and a 5-speed manual gearbox. If it were up to me to pick a highlight, it would have to be the fact that it weighs under a tonne. Indeed, the thing about this machine that’s probably more impressive than its vitals is the way it’s all put down on tarmac.

Roll out of the pit lane (we got to sample it at the Buddh circuit) and ease it into second on approaching C1. Two things hit you immediately: the gearbox is super light and easy to shift and the steering translates precisely what hauling 950 kg of metal feels like, and that’s a fantastic thing if it wasn’t bleeding obvious. Pile on the speed and haul in the corners at faster speeds and you’re bound to think that there’s something so very right about this car. The 3-cylinder petrol feels plenty refined, makes an acceptable noise and is more than happy to shoot to the 6100 rpm redline. It’s unusual, to say the least, for an engine this size. I was prepped to be alarmed by a noisy start-up, I was expecting it to feel lethargic until the lag called it a day, and more than anything I was dreading finding out that despite employing a new engine, I’d go back home believing that it felt, in the end, like nothing more than a sticker job facelift. Nope, nope and nope.

There’s poise in the way the Baleno RS handles itself. Its dynamism is something that needs to be seen to be believed. That, I suppose, is its most endearing trait. It’s not outrageously powerful, but it’s got enough to appease most. In a world of a multitude of disappointments, that’s a pretty good deal. Even the brakes are good. Now upgraded to discs all around, you can stomp on them with serious ease and rest assured that what you want will happen. It will. I tried it at 170 kph and while it did skittle about a bit, it never felt out of control. It turns in well, too, and that’s something I didn’t expect considering it’s got the weight of an engine in the front. So what if it’s a tiny 1.0-litre 3-pot? Weight is weight.

I think Maruti got it nailed with this one. I can’t wait to get it alongside some other cars to see how it goes with them. Heck, it’ll happen.