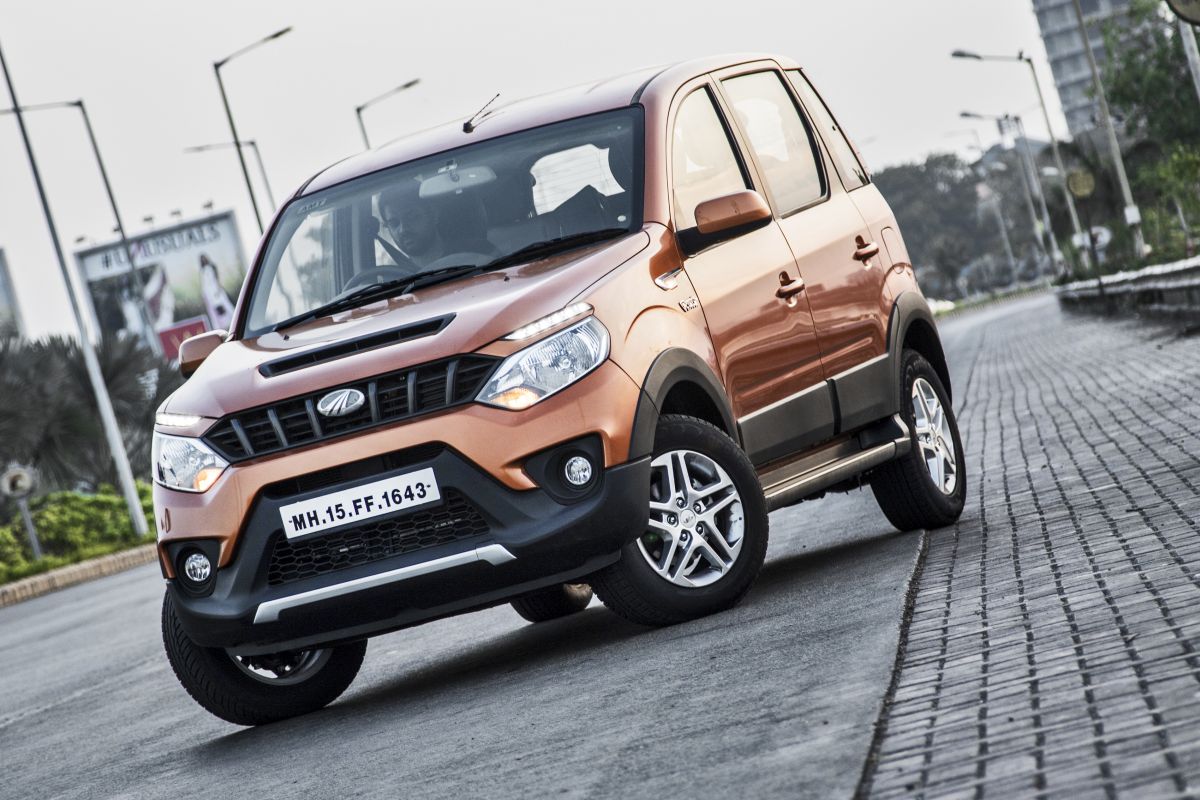 The Quanto was Mahindra’s first attempt at a sub-4-metre SUV. It had all the right ingredients: the SUV look from an SUV manufacturer, the base was a Xylo, which wasn’t the best handler, admittedly, but chopping off a bit reduced weight and that was always a good thing for the Quanto. However, other entrants into the segment meant sales didn’t quite meet Mahindra’s expectations. Last year, the TUV 3OO made its debut but now, the Nuvosport is here and will share space with it.

WHY A NUVO MODEL?

It seems like Mahindra wanted to complement the TUV’s bad-boy tough image with another SUV that had rounded edges, both literally and figuratively. The Nuvosport is then supposed to be for the discerning small SUV buyer who will spend most of his (or her) time in city traffic. The name also starts making sense, then – seems like someone at Mahindra has a sense of humour, thinking up a name that is quite similar to a rival small SUV. The Nuvosport is more new and less facelift, so it’s a pity that it looks like an evolution of the Quanto. The chassis is not based on the Xylo’s any more, but on the younger (meaning lighter and stiffer) Scorpio chassis. There are styling updates, of course, in the form of a more aggressive front end that is dominated by black – there’s a trapezoid lower grille with a faux bash plate at the bottom. The headlamps have DRL ‘eyebrows’ which look like an afterthought, and the hood intake for the top-mounted intercooler contributes to the ‘too many elements’ feeling of the front. From the side, it’ll all Quanto, barring the lovely alloy wheels. The blacked out pillars offer a floating roof element, and the cladding at the bottom not only contributes to the butch look, but also reduces the visual height. At the rear it’s all Quanto yet again, but the smoked tail-lamps lend a touch of modernity. The spare wheel cover is a good element.

IS IT ALL NUVO INSIDE?

Not really – here’s where Mahindra could have made a serious attempt to differentiate it from the Quanto, but surprisingly it look quite similar. There’s a new touchscreen colour audio head unit from Kenwood, but it is quite apparent that it is an aftermarket addition from the factory, so to speak. The viewing angle for the driver also isn’t great, needing a look away from the road ahead to see what’s on the screen. Our test car’s head unit also refused to let calls be answered via the steering-mounted controls or the head unit itself. Speaking of which, there isn’t a way to skip audio tracks from the steering wheel itself – something we sorely missed, like we did electrically folding mirrors. The storage spaces also feel very last-generation, with ergonomic flaws that we’ve not spotted in the TUV. The instrument cluster is another puzzle – the digital display shows only the odometer. All other relevant information is displayed above the central AC vents. This takes some getting used to. The AC controls are common to the TUV as well, and feel good to use. However, there isn’t any climate control on offer. The biggest problem by far is the rear seat back – fold up the jump seats in the boot so you have access to the full 412 litres, and the second row remains at an almost vertical angle because it rests against the folded seats behind. Folding down the jump seats improves things by a few degrees, but it isn’t enough, and you lose out on boot space. And no, you can’t have your Nuvosport with just five seats. There are a few redeeming features like the leather seats and the rear armrest, but overall we don’t find the cabin as user-friendly as the competition or the TUV.

Not really – this is the 3-pot motor from the Quanto. It displaces just under 1.5 litres and makes 101 bhp and 24.5 kgm. It feeds its power to the rear wheels via a five-speed manual or AMT gearbox. We’ve driven the AMT for this review. However, the engine first: it is a lot more refined than you would give it credit for. Even at high revs, very few vibrations make their way into the cabin. There is turbo lag, yes, but once the turbo starts huffing there’s a surprising amount of shove. The AMT gearbox is where it goes pear-shaped, though. The creep function doesn’t engage quick enough for our stop-start traffic, the shifts aren’t as quick as the best in the business, and sometimes it just is plain confused about which gear it should be in. Mahindra would do well to have a keen look at the Duster’s AMT and how it works.

This is one place where we can say, hand on heart, the Nuvosport is worlds better than the Quanto. The ride is well damped yet not harsh, and it goes around corners with far more enthusiasm (and a lot less wallowing). However, we don’t think there are massive gains over the TUV’s ride and handling package. At highway speeds, the Nuvosport acquits itself well, chewing through long miles effortlessly. The only hitch is the AMT gearbox – you have to plan your overtaking around those shifts. This is certainly one of the top two picks for bad/dirt roads, if you want an SUV on a budget.

Mahindra has worked on a fair few things with the Nuvosport. For one, there’s an accessories list a mile long, and it includes the ability to add enough chrome to out-bling Bappi Lahiri as well as features like a headrest-mounted DVD player and a cooler/heater, to truly useful things like parking sensors, a reverse camera, a tracker and an ISOFIX child seat. Still, with none of the accessories, it costs Rs 9.87 lakh for the N8 AMT, and that is a price at which we find it hard to justify the Nuvosport – especially when a more affordable alternative is available on the same showroom floor in the form of the TUV 3OO.