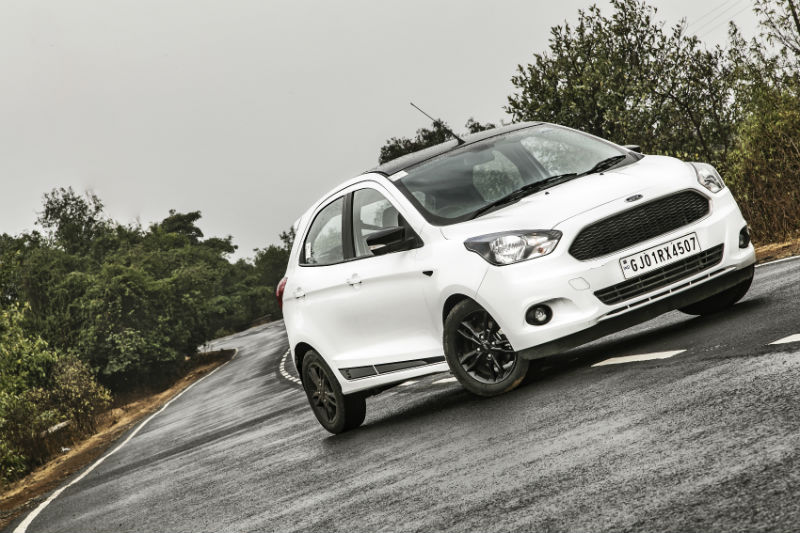 Before talking about the merits, demerits and what I feel about the Ford Figo Sports Edition, let’s respond to the elephant in the room: the idea of a hot hatch in India. Many a company has tried to crack the formula, but the lacklustre response from the market has more often than not led to discouragement. So, much like in case of estates, it appears that the Indian consumers — okay, not all, but a large percentage of those — aren’t ready to spend on a hatchback that can shame cars from a segment or three higher.

With that said, there has to be a way to offer more performance to the masses, the carmakers must have univocally thought. Which is when the idea of a diesel-powered ‘hot’ hatch must have struck them. Dirty or not, modern diesel engines deliver power in a more useable way, hence minimising the need to rev the nuts off. And with most of these ‘hot’ cars likely to handle everyday duties as well, it doesn’t hurt to be more driveable. That’s that, then, for the market-related drivel. What matters more here is how Ford has tried to make a small hot hatchback.

First the positives. Here’s how Ford managed to get it right:

A 1.5-litre diesel engine that makes 99 bhp and 21.92 kgm sounds a bit meh, but like most diesels, it surprises in the way it pulls. The surge continues in a linear manner making the car more fun and closer to being a hot hatchback than a pickup truck. Not a lot of cars in the segment manage to pick up speed as relentlessly as this one, with second gear 75 kph becoming a usual affair on the highway. It stays eager towards the end of the rev range, too.

The five-speed gearbox makes driving the Figo more enjoyable, with not too long throws and a shift action which requires some force to slot in gears. It’s not the open-gated unit that you would find on a supercar from the 80s, but it still adds to the experience. It makes you work, hence making driving the car a bit more involving.

Still not the lightest of the platforms, the Figo’s short wheelbase makes it a nimble package. Like the Fords of the past (Fiesta and previous-gen Figo, with which it shares its platform), the Figo Sports Edition feels planted for the most part. It doesn’t corner flat –far from it, actually — but more importantly it inspires confidence in a way most small cars cannot.

You might still need an aftermarket suspension package if you intend to take cornering seriously on the Figo, but the retuned suspension has indeed made the car more stable. The low-speed ride is still commendable, more so in the way it soaks smaller of the bumps.

Modern small cars aren’t conventionally beautiful. They can be cute, but it’s rare that they make it to the bedroom walls. The Figo is no different, but the Sports Edition makes it way more appealing than in standard form. The beautiful 15-inch wheels and the contrasting paint scheme make it stand out. And not in a special edition with a gazillion stickers sort of a way, but how a hot hatchback must look.

Now before you think that the Figo is the best compact hatchback on sale, it does have its share of negatives. A quick look on what the car doesn’t quite get right:

Okay, with the inclusion of a diesel engine, the hot hatchback definition was to be modified a little, but the basics weren’t to be touched. And that’s where the Figo loses the plot, slightly. With a switch from the hydraulic-assisted power steering unit, the current Figo’s EPAS feels a bit numb. That the car offers a good sense of connection elsewhere highlights this even further.

Once acquainted with it, you would find the steering does its job well, but there are times when the weighty unit of the previous-gen Fords is missed.

For reasons yet unknown to mankind (or maybe just to myself), Ford India decided to offer the Figo Sports Edition based on the top-but-one Titanium trim only. That meant there was no SYNC system to speak of. It offers emergency connectivity and app support, none of which can be found in the rather basic system here. Also, we are unsure if you can take an aftermarket audio system and fit in place of the factory unit, given its unique keypad and button placement.

Another omission is that of side and curtain airbags. One can easily look beyond the audio system, but offering only two airbags instead of the segment-topping six is certainly beyond us. Same can be said about the dead pedal, which is so vital in a diesel engined car but is missing as well.

But despite the shortcomings, the Figo Sports Edition is one of the best, driver-focussed hatchbacks you can buy on the right side of Rs 10 lakh. It stays true to Ford ethos, and, needless to mention, deserves the ‘S’ badging.

Much like the Polo GT TSI and the Baleno RS that we tested last month, it’s also not quite the hot hatchback you’d want if you’re looking at some serious action. But for what it is, the Ford Figo Sports Edition (Diesel) does quite a good job of offering decent performance without drinking gallons every mile.

You can make it more serious with a tyre+suspension upgrade, surely, but for a ‘daily driver’, this is more than adequate. Before Anubhav left for the car’s first drive (you can read his report here), we discussed how Ford could create the perfect ‘hot’ car for the segment, by offering the 1-litre EcoBoost turbocharged petrol in this. Because that engine deserves a lighter chassis than the EcoSport’s, which is where the Figo fits perfectly. Just make an EcoBoost-powered Figo, Ford, please!

For those who want a diesel-powered hatchback that offers distinctive styling, immense performance, and fewer stops at fuel stations, the Ford Figo Sports Edition can quite be the perfect choice.