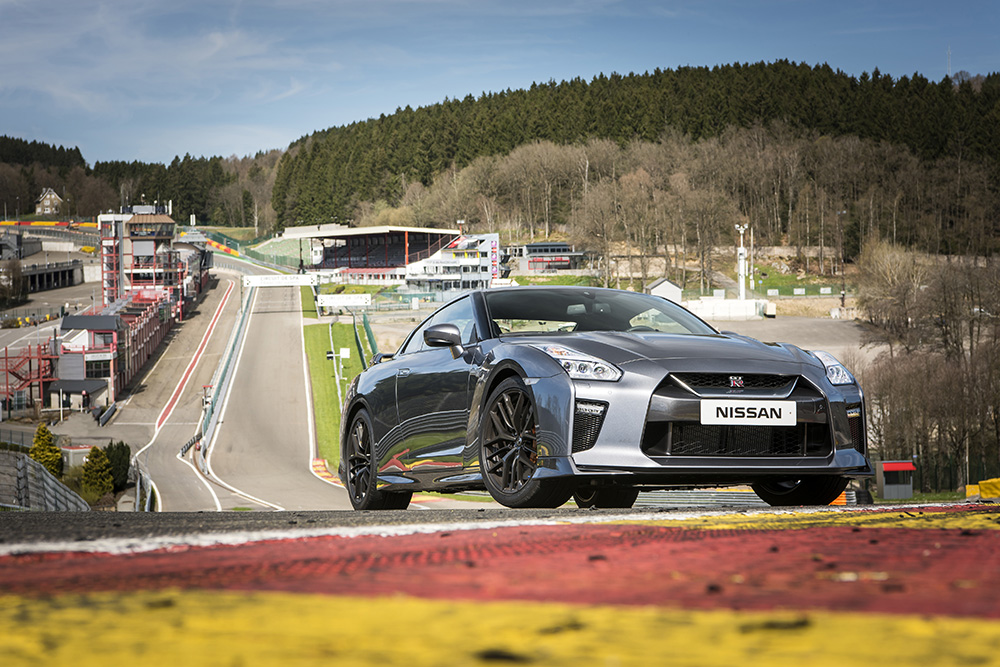 A serious update, the car also gets a host of updates to the exterior, aero, interior and motor. It’s probably the last hurrah before an all-new model goes on sale in a couple of years.

SO WHAT’S NEW ON THE OUTSIDE?

Nissan have made changes to the front fascia to incorporate a new wider air-dam to improve cooling, new LED daytime running lamps, new skirts on the flanks that are inspired by the 2015 Nismo GT-R, minor changes to the bonnet, window frame and C-pillar to improve rigidity as well as the tail end. As Hiroshi Tamura, head of all things Nissan GT-R says, the changes are more for function than form.

AND ON THE INSIDE?

The dashboard has been cleaned up and it now gets a wider screen, a new jog dial to go through the various menus, a new steering wheel with all sorts of buttons, paddle shifters that have moved from the steering column to the boss and a new centre console. You even get new leather trim options that have really smartened the car up.

Yes, there’s about 20 bhp more and 15 Nm torque as well. This has been done to improve performance closer to peak revs. Power now is a healthy 562 bhp, up from the previous 542 bhp while the gearbox is still the same 6-speed dual clutch.

Oh, the suspension and dampers have had a once over to improve ride quality across various surfaces. Everything else, otherwise more or less is the same.

WHAT’S THE PERFORMANCE LIKE?
Tamura San showed us a bunch of slides that plotted performance on an X-axis and maturity on a Y-axis. Placing the 2013 model onwards, the focus has been on improving maturity, however, with this one he claims, they have added performance too.

The added performance is not instantly discernible at low speeds. It’s only post 4k rpm that the additional torque really starts to make the car feel quick on the uptake and given the opportunity to stay close to the 7k rpm redline, the additional horsepower comes into play.

What you still can’t fault is the gearbox. It’s still lightning fast and because it’s on the steering wheel, the shift action is quicker with less travel. It’s only when you are at over 200 kph do you feel it could have done with a 7th gear to improve cruising ability, but the GT-R has always been more R and less GT, so that’s fine.

HAVE THEY REALLY MADE IT SOFT?

You have to understand that the supercar market has gone a touch soft in any case. The Lamborghini Huracan feels like a more expensive Audi R8, the Porsche 911 Turbo S is more GT than outright sports car and the Ferrari 488 GTB has driveability unlike any mid-engined V8 through its history.

By that count, the GT-R has lost some of its manic edge. The steering has lost some heft but it’s still quite feelsome, thanks to the fact that it uses an oil pump and not an electronic heart. The gearshifts dont’ leave much of a thump at the base of your neck in R mode, unlike the previous iterations. And the ride isn’t as harsh or brittle, unlike the original 08/09 variants. But it’s fast, brutally so.

AND HOW DO WE KNOW IT’S BRUTALLY FAST?

Driving it at Spa, after a long drive from Dusseldorf through country roads. The speed just before entering Eau Rouge is 180 kph and just a nudge of the brake pedal brings that down to 130-140 kph before you take, what is in effect, a series of corners that climb nearly four stories high!

At the back straight, before the 200 m braking marker, the car is doing anywhere between 230 and 250 kph in the wet, and even then the brakes really haul the car to saner speeds very easily. The tyres may have given up on a wet track, but not the brakes.

The overall cornering ability of the car ranges from understeer to a touch of oversteer moments if you step on the gas too soon. The balance for a front-engined, all-wheel drive car is staggering, but it isn’t as loose as the 2015 model year car we drove just a few months ago at the Buddh International Circuit. It has ‘matured’ as Tamura San puts it.

SO IT DRIVES WELL, BUT IS IT WORTH CONSIDERING?

You really need to be GT-R mad to drive it and Nissan India is looking at selling no more than a handful of units when it goes on sale in September-October. For a Nissan it’s going to be pricey, pricing expected to be in the Rs 2 to 2.5 crore range. That puts it right against the likes of the Mercedes AMG GT S, Audi R8 V10 Plus and Porsche 911 Turbo S, all of which have more wow factor than the Nissan.

However, if you are looking for a car that’s brilliant across all kinds of conditions, can do a bit of weekend Grand Touring and is a hoot around the track, the GT-R’s true competitor is the Porsche that’s just a bit better put together as a car. But make no mistake, the GT-R is the more lively one. You can take your pick.