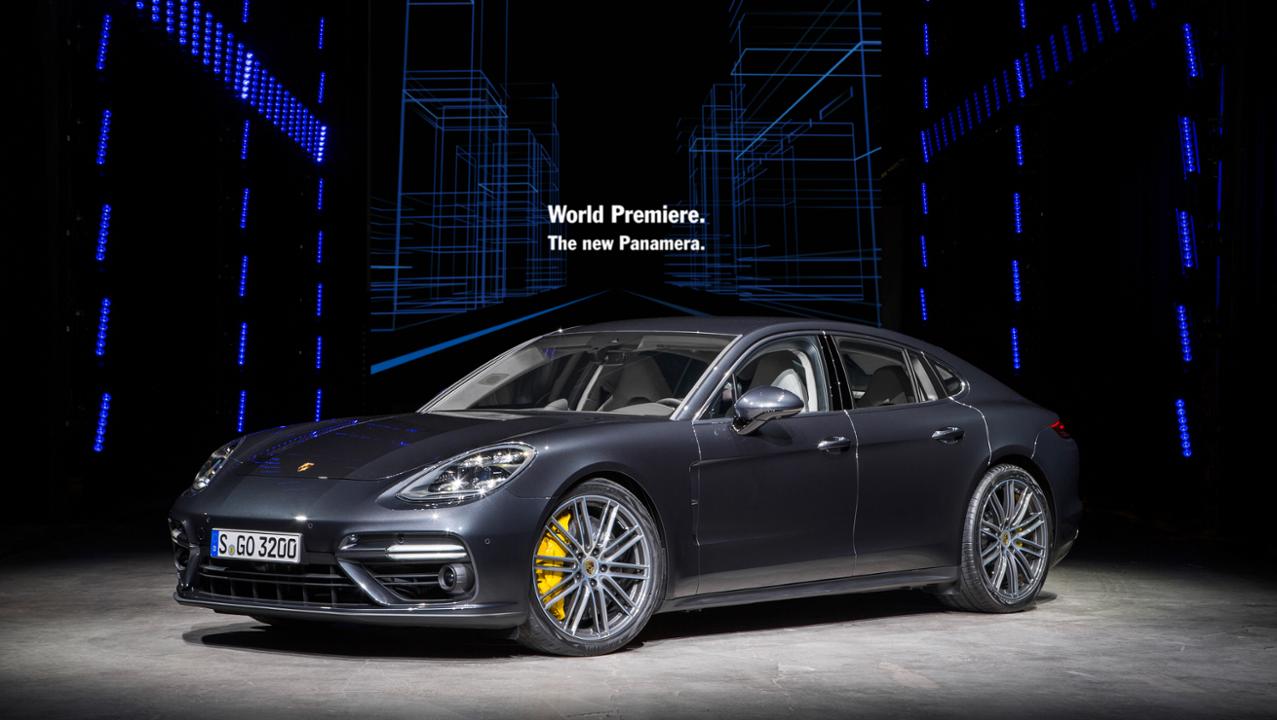 Porsche’s sports sedan – the Panamera – has gone through a generation change, and the new one has been launched in Berlin. In brief, there are brand new engines, the styling is sharper, the interior is leap forward compared to the old one and with a record breaking Nurburgring lap, the Panamera Turbo is now the fastest sports sedan in the world.

The new Panamera is a based on the VW Groups’s modular MSB platform, which will also be used to base the new Audi A8 and the next generation Bentley Continental GT. The numbers will tell you that the wheelbase is longer, the overhangs are bigger, the roof is lower and the car wider than before. But it doesn’t tell you is the remarkable job that Porsche has done with their redesign of the rear of the car. Instead of the bulbous section aft of the c-pillar of the older car, the new Panamera’s roof tapers down more steeper than before and merges into the bootlid in a more pleasing way. It really does look like a sedan version of the Porsche 911 this time around. While up front, Porsche offers an matrix LED headlamp unit with no less than 84 elements, at the back there is a trick spoiler than comes up and folds out at speed.

Inside is all-new territory for Porsche. Instead of the usual button-fest in the huge centre console, there are giant screens and touch sensitive surfaces. The familiar multi-pod instrument console is still there, but with a digital twist. There is an analog tachometer in the centre, but it is flanked by two digital displays on both sides. The centre of the dash is taken over by a huge 12.3 inch touch-sensitive display, with touch sensitive panels beneath it. Even the air-conditioning vents have touch sensitive air-control sliders.

An interesting feature is Porsche’s latest version of the adaptive cruise control. Called Porsche Innodrive, it scans the road ahead with the help of radar and it calculates the optimal acceleration, braking, gear changes and coasting for the next three kilometres.

At launch, there are three models on offer, the Panamera 4S, Panamera 4s diesel and the Panamera Turbo. While the petrol comes with a 2.9-litre twin-turbo V6 with 440 hp, the 4.0-litre V8 powering the Turbo makes a very impressive 550 hp, making it more powerful than a 991.2 Turbo! The oil-burner in the range, for now, is a 4.0-litre V8 with 86.7 kgm and is, for the first time, available with the all-wheel-drive system. Naturally aspirated engines will be absent from the new Panamera lineup, along with manual gearboxes. Later, a 3.0-litre diesel and less powerful versions of the V6 petrol is expected.

That’s not all, because after the sedan, Porsche is going to expand the Panamera line by adding an estate version, based on the Sport Turismo Wagon.