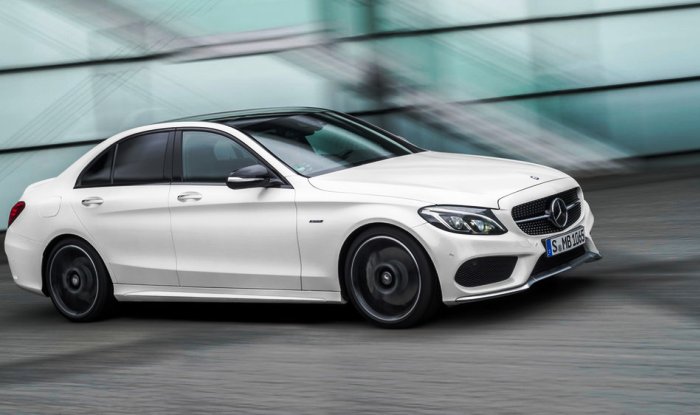 It is weird how sensitized we have become to acceleration figures, which, a decade back, would surely have been followed by an exclamation mark or two.

Consider the C43 AMG sedan, which is going to be launched in India later this month, on the 14th. The C43 can hit a 100 kph from a dead start in just 4.6 seconds. Four point six seconds for something which is not even an AMG, and which is a 1.7-tonne sedan to boot. It honestly is amazing that today, manufacturer’s performance ‘sub brand’ is capable of coming out with sedans which are faster to a ton than a mid-engined Ferrari from the early 2000s.

The C43 AMG, therefore, seems to be quite impressive on paper. If you lift the hood up of a C43 and peer onto the 3.0-litre V6’s engine cover, you wont see the name of a solitary German there, because these ’43s’ are not made as lovingly as the AMG motors. But if you think that these 43s are just a way to use the AMG brand to sell less capable cars, you are quite wrong.

The 3.0-litre, twin-turbocharged V6, which produces 357 bhp, has AMG patented ‘Nanoslide’ tech on the cylinder walls. AMG has also worked on the gearbox, with the 9G-Tronic optimized for faster shifts and its brain has been reprogrammed to understand that this car would be driven fast, often. The AMG-fiddled 3-stage dampers are adaptive, and has been tuned to increase the stiffness and to respond faster to changing road conditions. That also depends on which Drive Select mode you are in, with things getting sharper in Sport and Sport+. The brakes are larger than what you would get in an average C-Class sedan, with 356mm up front and 316 rotors at the back. The brakes are also used by torque-vectoring system to force torque to the wheels which have more grip.

Inside, if you want to lull your passengers into a false sense of calm, the C43 is available black ash wood trim in the centre. But what might raise some doubts is the very racy flat-bottomed steering wheel, covered in Alcantara and a red-stripe at the 12 o’ clock mark. The red seatbelts might set some alarm bells ringing too. Outside, other than a bigger air-dam, there is no obvious giveaway that this is a much powerful C-Class.

The only downer might be the fact that the C43 will be available with 4Matic (read all-wheel-drive) as standard. So it might not be as good as converting rubber to smoke, as one would like. But then, you get a 4.6 second to hundred time to brag about. Fair trade, I would say.