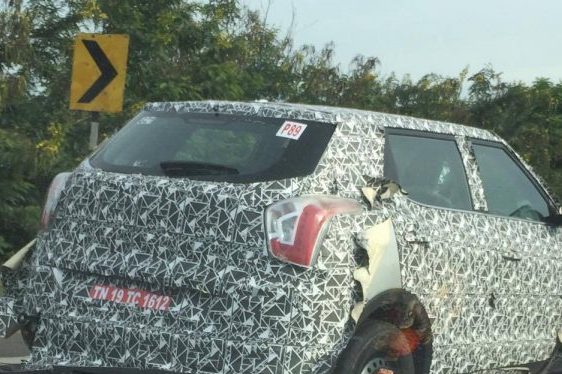 It may appear that Mahindra has been waiting with its barrage of launches lined up for the end of 2018. First came the Marazzo, which has truly taken Mahindra’s MPV game up a few notches, and then came the Alturas G4. The latter is an open invitation for everyone looking for a full-sized SUV to try out and possibly come back impressed with a Mahindra. And Mahindra wasn’t absent from the motorcycle market, either. The Mahindra-backed firm Classic Legends recently re-launched the classic motorcycle brand Jawa in India. So what next, you may wonder. Well, it’s the all-new compact SUV from Mahindra. More details on the same are awaited, but Mahindra is likely to round up this year’s rota with the official name announcement of this one.

It’s based on the Tivoli, but as Mahindra’s made it clear re Ssangyong products, this too will be branded a Mahindra. And why not, because while it may share a lot with the smallest Ssangyong on the market abroad, this one is likely to have a lot of India-specific features and will also be made here. The compact SUV space is filled with products, and every manufacturer wants to make a mark, so how will Mahindra differentiate itself, you must wonder. To start with, there will a range of engine choices (petrol and diesel both; something the Maruti Vitara Brezza misses out on), a long list of features (no one likes a poverty-spec lifestyle vehicle; and possibly to compete with the Hyundai Creta), and even options like AMT .

Engine choices are likely to include the three-cylinder 1.5-litre diesel unit that Mahindra introduced in the Quanto. It’s been used in a variety of vehicles — the latest being the Marazzo — and is punchy but doesn’t fail in terms of frugality or refinement, either. The petrol version of the S201 is likely to be powered by a new 1.2-litre turbocharged petrol engine. With said engine displacements, the new SUV will be eligible for tax rebates, as long as it’s under four metres, like most of its rivals such as the Maruti Suzuki Vitara Brezza, Ford EcoSport, Tata Nexon, etc.