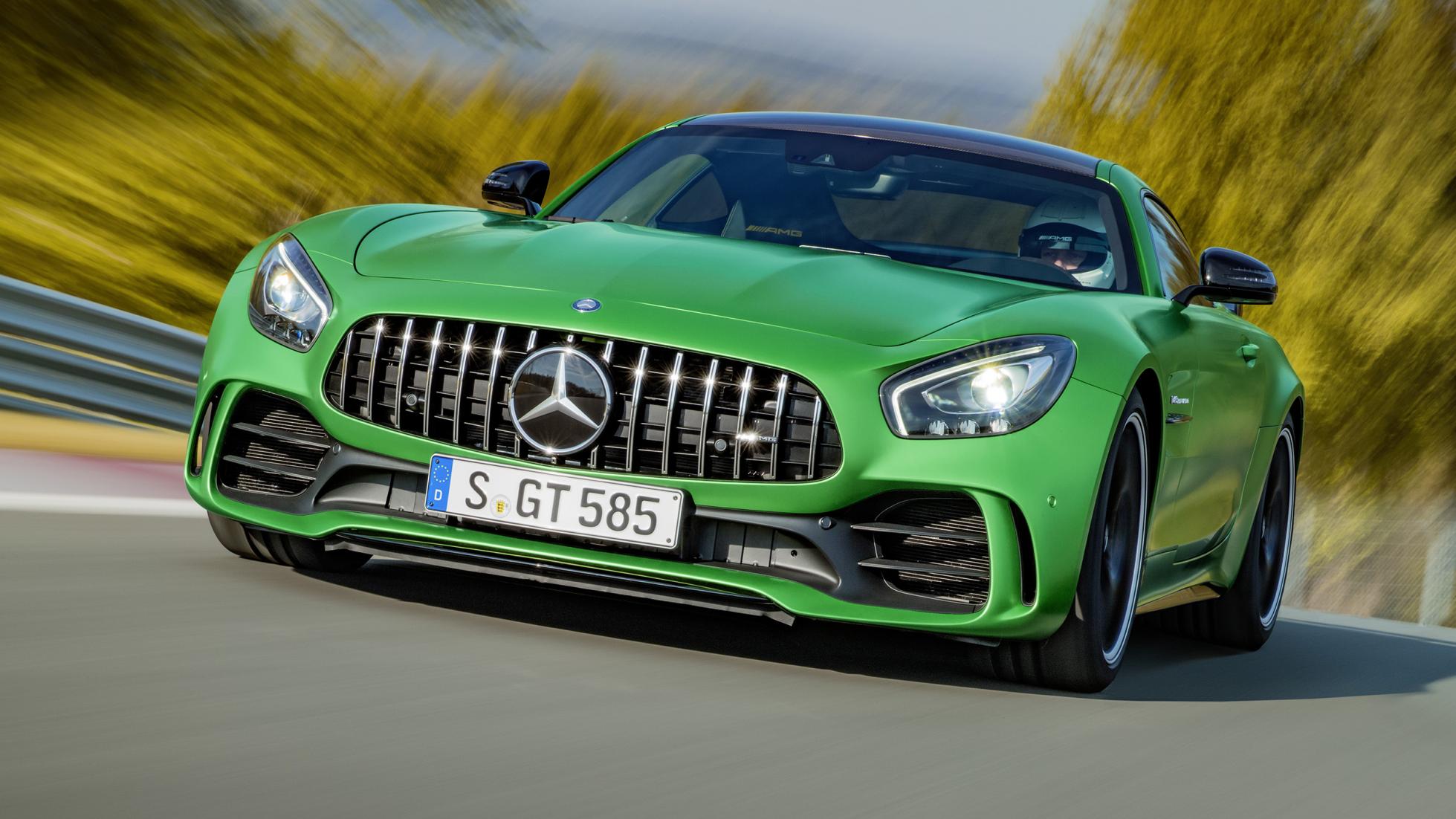 ‘Green Hell’ is as cliched as it gets, but dont tell Mercedes-AMG that. This green paintjob on the new Mercedes-AMG GT R is actually called ‘AMG Green Hell Magno’. Talk about being subtle. Which this new R version of the AMG GT, is anything but!

We have AMGs of everything these days. Hatchbacks, sedans, coupes of sedans, coupes of SUVs etc. We have midway AMGs too; which are not exactly AMGs, but more powerful versions than the standard cars. It felt therefore, especially in recent times, that the AMG brand had kind of diluted itself. Instead of creating visions of cars which can only go sideways obscured by a cloud of tyre smoke with a thunderous exhaust note, AMGs have been so common that a new one doesn’t really grab the attention like it did before. Until now. Because this Mercedes-AMG GT R sounds like an AMG from the old country. Brawny, hairy and mad.

The Affalterbach engineers have really gone to town with this one. First up, the engine. The 4.0-litre twin turbo V8 is now more powerful, with the power up by 74bhp over the GT S to 577bhp. Torque figures have climbed up as well, to 71.3 kgm, with all of it available from 1900rpm onwards! The increase in power has come about by increasing the boost pressure from 1.2 bar to 1.35 bar, along with new, faster-reacting turbochargers. The power is transferred to the transmission which is housed in a transaxle at the rear through a carbon-fibre torque tube. The waste gases make their way out through a new titanium exhaust system which has an infinitely adjustable flaps to modulate the sound. The seven-speed dual clutch transmission also has a few changes, in the form of a shorter first gear ratio, and longer ratios for the top gear. That shows in the zero to 100kph time of 3.6 seconds and a top speed of 318 kph.

They have not just made a more powerful AMG GT, but made it lighter too. Along with the carbon-fibre torque tube, and titanium exhaust, the roof and the front wings are made of the lighter material. All this has helped the GT R shave 15 kg off the GT S, which, at first might not sound much, but a lot of additional tech and chassis re-reinforcements have been added too. Like the addition of a four-wheel steering sytem. Like the Porsche system, the rear wheels move in the opposite direction at lower speeds and move in the same direction as the front wheels at higher speeds. Instead of an active spoiler, the GT R comes with a fixed unit, whose angle can be manually adjusted. There are new carbon-fibre flaps in the undertray which actively work to channel air around to help in generating downforce. Both the front and rear tracks have been widened, with lightweight ten-spoke wheels and bigger ceramic brakes.

Elements of the Mercedes-AMG GT3 program has found its way into the road car. Like those vertical slats on the grille and the wider air-dams on the side. The vents on the back bumper along with the slats beside the tail lights are also taken from the GT3, all working together to extract the air from the engine-bay. The software for the nine-level traction control system has also been influenced by the GT3 , with the most hardcore setting copied straight off the race car. The coil-over suspension, too, can be infinitely adjusted manually, too suit whatever grips levels required. While the continuously adjustable damping system’s software has been worked over to ensure that it keeps those tyres on the ground, always.

Built for the racetrack it might be, but it does not eschew any features from a normal GT. So no, it doesn’t have straps for door handles. Instead there is a lot of suede and alcantara with yellow detailing, along with lightweight sports seats.

It will be sometime away before we can see one of these in India, though, because although the sales start in November, the car is not expected to officially launched before March 2017.