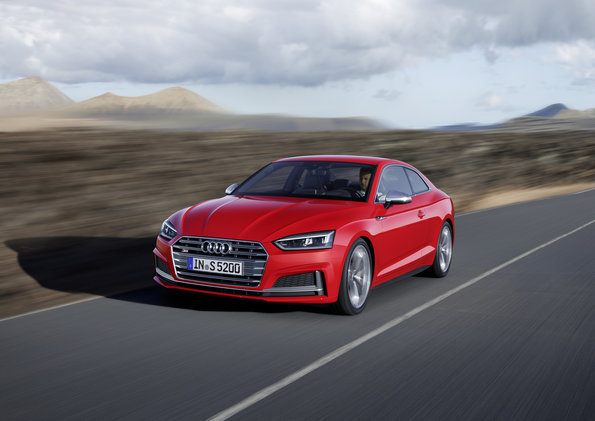 Audi has pulled off the covers of the new A5 and S5 coupe, and it looks surprisingly…different. A welcome departure from the industry which revels in copy pasting design up and down the model range, the A5 styling direction might be the work of Marc Lichte, Audi’s new design chief. Marc is also responsible for the design of the Audi A2, a small crossover, which too had departed from the Audi corporate styling direction with a new grille, and un-Audi-like cuts and scoops. The other interesting bit is, the new A5 clearly takes inspiration from Audi’s Prologue concepts, which in itself acted as a precursor to Audi’s new styling template for its future models.

It is the curving betltine that makes the rest of the design flow with it. Unlike most modern Audi’s it rises and dips down over the front fender, creating that downwards curve of the bonnet, the one design cue which immediately catches one’s eye. The curves on the sheet metal are contrast to the sharp edges of the headlights, the hexagonal grille and the air dam. The same beltline again rises and falls over the rear haunches and joins up with a small bootlid spoiler. The other neat feature is the door mirrors, placed on the door shoulders instead of its usual place. The interiors also mirror that of the new Audi’s with the lack of a huge centre console, dashboard length AC vents and the Virtual Cockpit display.

Under the hood there are some notable changes. The S5 comes with a brand new 3.0-litre twin turbo V6 which produces 354 bhp and a 50.9 kgm, along with a 286 bhp diesel for the regular coupe. There is not only a manual transmission on offer, but there are two automatics, a seven speed dual clutch and an eight speed torque convertor. The manual six speed transmission and the S Tronic dual clutch will be available only with the four cylinder engines and the 3.0-litre TDI in front or all-wheel-drive configurations. The eight speed torque convertor is reserved for the S5 with the 3.0-litre twin turbo and the more powerful diesel engine. Since it is based on the all new MLB evo platform, the body of the A5 and S5 is 60 kg lighter than their predecessors but with increased rigidity. For the more sportier versions, the sport rear differential is optional together with a variable gear ratio steering system.

The new Audi A5 and S5 will go on sale in European countries towards to the end of 2016, and will probably come to India by middle of the next year. Curiously, Audi has been caught testing the next generation A5 Sportback in India for a while now, indicating that the Sportback might be the first model to come to India.