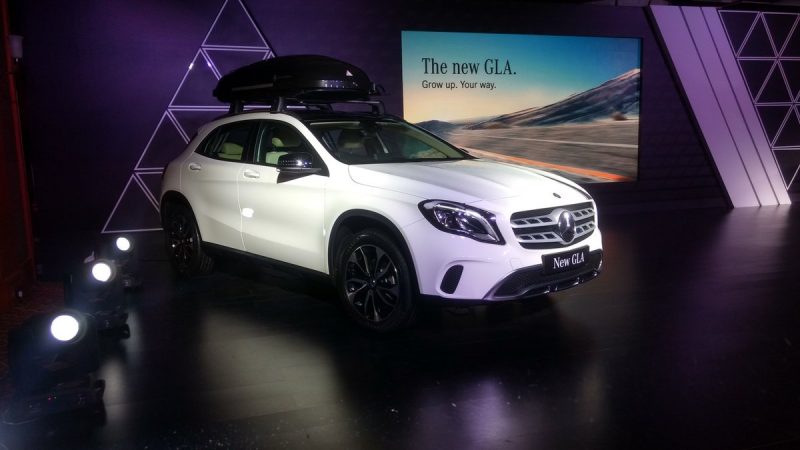 The 2017 Mercedes-Benz GLA crossover SUV has been launched, with updates made to its looks (both inside and outside), while mechanically it remains rather unchanged. Like in case of the Activity Edition that was launched last year, it can now be specified with the 4MATIC AWD system on the diesel engined, non-AMG model.

The standard model, though, remains front-wheel drive. Engine options include a 2-litre petrol (GLA 200; 180 bhp) and a 2.1-litre diesel (134 bhp on the 200 d; 167.6 bhp on the 220 d)  , both of which come mated to an automatic gearbox. The top-spec GLA 220 d comes in a more powerful state of tune, and is available with the aforementioned 4MATIC system as part of the standard equipment.

And equipment levels aren’t too bad, considering you now get a new eight-inch Apple CarPlay-/Android Auto-ready touchscreen infotainment system, all-LED headlamps, leather interior, etc. There are two trim levels: the base Style and the Sport. The former is available only on the lower-spec diesel, while the petrol is exclusively available in the Sport trim.

The updates on the exterior of the vehicle showcased first at the 2017 Detroit Auto Show include new bumpers, a wider/more prominent-looking grille, whereas the interior is refreshed with a few changes made to the dashboard.

There are five colours to choose from, and a multiple service, insurance, and extended warranty packs. Regardless of which colour you want your GLA in, there are 12 ambient lighting options to keep you happy.

One more thing that would make you happier is that despite the usual Merc build, fit and finish, and even brand appeal, the GLA is priced at just Rs 30.65 lakh onwards, ex-showroom. That’s for the base diesel engined version, with the petrol priced at Rs 32.20 lakh, the better-equipped GLA 200 d Sport at Rs 33.85 lakh, and the top-spec GLA 220 d 4MATIC at Rs 36.75 lakh.