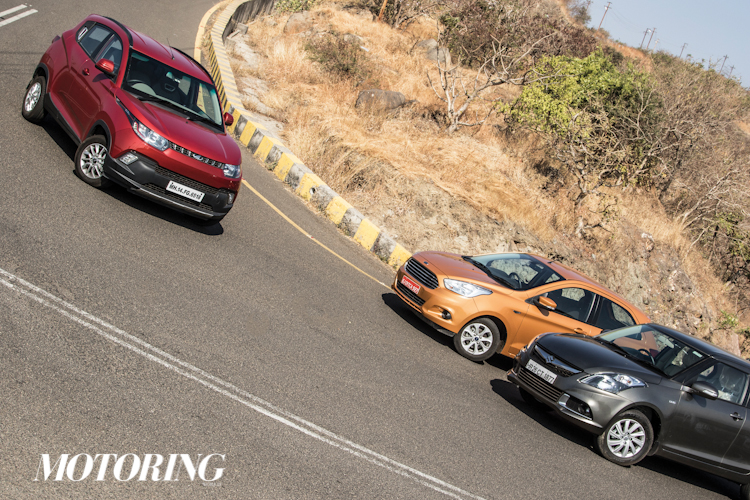 The wolf, the goat and the cabbages. Remember that story? If you don’t, you should look it up. It’s a classic problem where a man needs to get across a river in a boat with just one of the three things, and he needs to manage it in such a way that none of them manages to eat the other while he’s across the river. There’s a similar problem here: we’ve got the Maruti Suzuki Dzire, which has long been the gold standard of sub-four-metre sedans, matched up against the Ford Figo, who we believe to be the best hatchback to buy at the price, and the new entrant to the price bracket, the ‘SUV’ choice, the Mahindra KUV 1OO. Which should you pick if you’ve that kind of money, then?

It certainly does, doesn’t it? We’ll begin with the oldest of the lot. The Swift has been around for approximately a decade now, and the Dzire in its current form since 2011. It has undergone a refresh late last year and among the changes are blacked out lamps, a thicker chrome strip on the grille and the obligatory bumper changes. It is a good looking car, sure, but it’s far too common. We’re still going to object to that stubby boot: it is far too disproportionate for the rest of the design and other sub-4-metre sedans have managed the integration better. There’s one other problem with the looks of a Dzire… I was flagged down by every other person standing at the side  of the road. Not a nice  feeling when you spend  this much money on a car,  I can assure you.

The Figo gets a complete makeover for the new-generation car, and it leads with that aggressive Aston Martin nose. It’s a more sober design after that, with clean lines and just two horizontal creases defining the sides. The wheels also aren’t as aggressive as the turbine-type alloys of the Dzire, which is a surprise considering how young this design is. The rear also isn’t very aggressive, but is cohesive for sure.

The KUV is the most flamboyant of the three, and not just because it is an SUV (We’re using the term ‘SUV’ as a common noun here, not as the term that Mahindra has patented, along with the 25 other alphabetical UV combinations). It’s got headlamps from the Range Rover Evoque, tail-lamps from the first Audi R8 (and Q7 and TT of similar vintage) and more creases than an engineering student’s shirt on the day of his final exam. It’s very here and now, no doubt, but it’s going to age faster than a Hollywood starlet with no access to Botox. Mahindra is well aware of this, however, and plans a refresh in a few years. It also could do with slightly bigger wheel rims to offset that tall stance and unexciting silhouette.

Overall, we prefer the Figo to the other two, because it is the most cohesive design of the three, and will age with the most grace.

It’s a similar story with the interiors — the Dzire has the most familiar interiors of the lot but it also has modern touches like the new steering wheel and Bluetooth-enabled audio system that we first saw on the Ciaz. The legroom is appreciable for the length of the car, but the overall space isn’t the most of the three here. It is well offset by the light, cheerful colours chosen for the cabin and gives the impression of there being more space than there actually is.

There are some very interesting touches like the retractable cup holder that is mounted just below the AC vent, meaning your drink can be kept cool and well within your sight line. The KUV has a very different but nonetheless appealling colour scheme of blue and gray, and opts for an audio system that doesn’t look the best, but is an infotainment system as opposed to the other two’s mere audio systems. Download the relevant Android app (soon on the iTunes store, worry not) and you can have a wealth of information about the KUV like the distance-to-empty range on your phone. The Figo apes the EcoSport and Fiesta before it, going with a very Nokia Ngage-like layout for the numerous buttons. Of the three, the Suzuki’s layout is the easiest to understand and the Ford’s the funkiest to look at.

The seating position and layout of the Ford and Suzuki are similar, one being a hatchback and one being derived from a hatchback. All controls fall easily to hand and space is at a bit of a premium at the rear, but it isn’t anything to complain about.

The Figo feels a little smaller in the back thanks to the wider C pillar. The KUV is where everything changes. We’ve got the six-seater version, which allows for a sixth passenger in the form of a middle front passenger, but we wouldn’t recommend you sit there unless you’re 1) Really short, else your knees will meet the dashboard, or 2) Comfortable with intimate contact by the driver every time the handbrake has to be engaged. The seat back also folds down to form an armrest and storage space, but we found the five-seater version is far more useable, with its additional elbow room for (merely two) front row occupants and a row of storage spaces along the floor that are absent in the six-seat version, meaning any bottles rolling around in the passenger footwell have a good chance of making it to the driver’s side during an enthusiastic left-hander.

Boot space in all three is comparable — the Dzire feels like the best of the lot until you discover that the rear seats don’t fold or tumble. The KUV’s boot is quite tall as well as deep, and has a low, wide loading lip compared to the Figo. Bonus points to the KUV for the ISOFIX anchor points for a child seat.
Overall, the Figo’s interiors look and feel the most premium, but it cannot be denied that for all its quirks the KUV does a fine job of liberating the most usable space of the three. We just wish that there wasn’t a six-seater, or a badly finished handbrake from a 1950s pickup truck.

HOW IS IT FROM  BEHIND THE WHEEL?

The Dzire has a very familiar driveline: the 1.3-litre DDiS diesel powering the front wheels. The example you see in the pages is an AMT automatic, but the manual gearbox is also a joy to use, with its short, snappy throws and light clutch. The power figure isn’t exorbitant, but it manages to sprint quite well thanks to the low kerb weight.

The KUV has an all-new 1.2-litre three-cylinder diesel from the mFalcon series of engines, and it makes a very strong case for itself with its pulling power from 2000 rpm onwards. It has enough torque for almost all situations, and will rev happily to 4000 rpm.

The Figo, however, is the one who has brought a gun to a knife fight, its 1.5-litre four-pot TDCi bringing nearly 100 bhp to the table, and a monstrous 0-100 kph time of under ten seconds.

In a straight line, the Figo will decimate the other two cars. Around a corner, though, the Dzire is the most alive, its light weight lending it the upper hand. The Figo’s steering and brakes are dead accurate, but it loses points for a numb steering in comparison.

The KUV, being a crossover, doesn’t respond as well to inputs, especially at speed, but it handles most impressively, and not just for a Mahindra. The involvement from chassis and suspension experts Cayman Dynamics from day one shows clearly in the KUV’s abilities. The Mahindra is the one we’d also trust for bad and no road situations, its extra ground clearance offering that much more a margin for error.

First up: the Maruti Suzuki Dzire. This is the oldest, most reliable and cheapest to run and maintain here — ask anyone who has owned a fleet of them, and you’ll realise exactly how affordable a Dzire is. However, that price isn’t affordable at all. At Rs 7.9 lakh, ex-showroom Delhi, it is a full Rs 44,000 more than the Figo.

The Figo offers a decent amount of kit, space and good looks backed by that 100 bhp power figure — we can only imagine what it is like with a diesel tuning box involved. At Rs 7.47 lakh, it sits in the middle of the price spectrum here. The Mahindra KUV 1OO is the most affordable to buy, at Rs 6.79 lakh, but you know where that money was saved when you sit in the car. It isn’t that Mahindra hasn’t done a commendable job — that price/space equation of the KUV  is irresistible if you’re looking for space above all else — but ultimately it’s the Figo that will help you get your wolf, goat and cabbages to where you need to with the best mix of comfort, speed and efficiency, so that gets our vote.