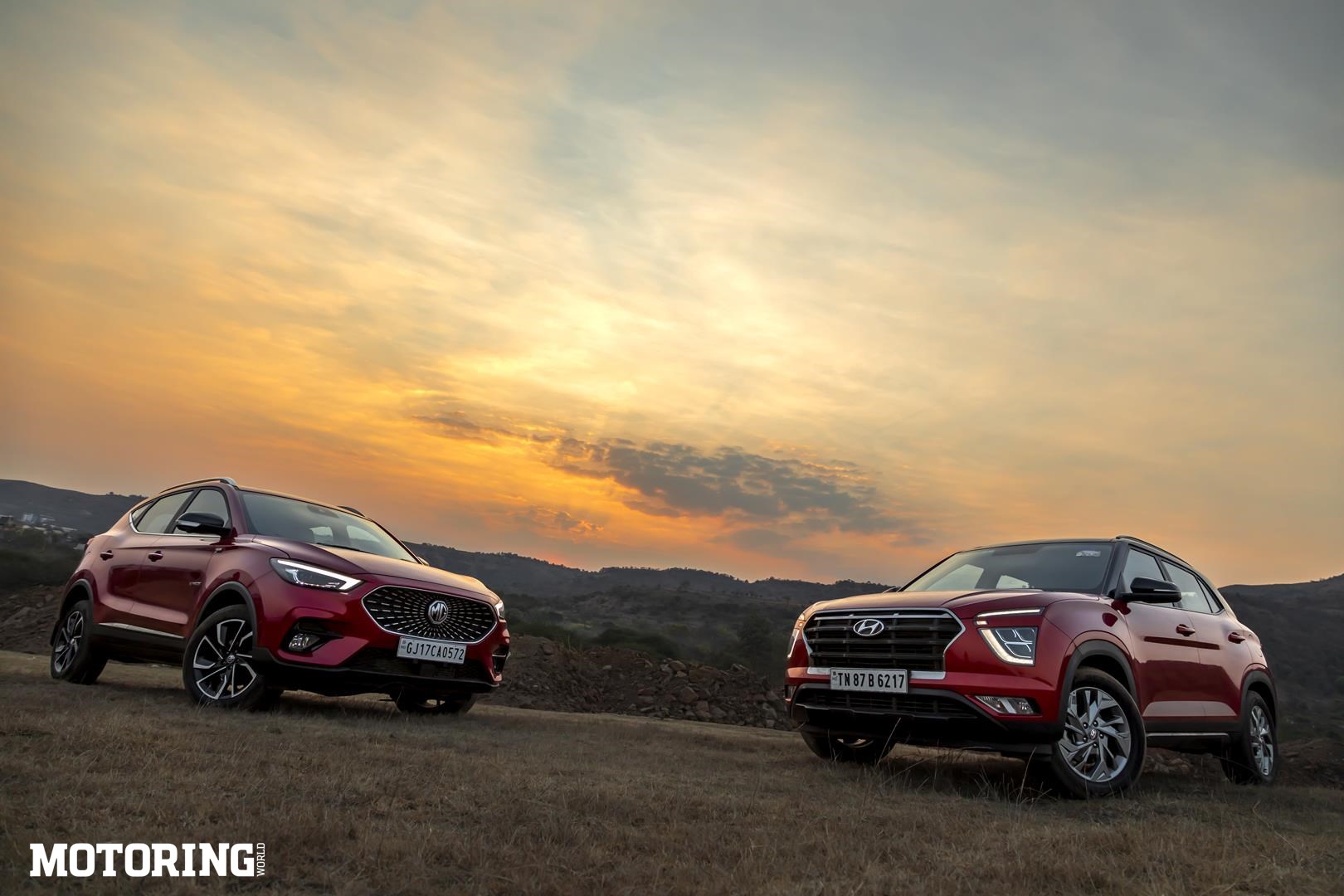 While there’s no doubt the Hyundai Creta is the reigning midsize-SUV champion, there have been more than a few contenders that have come in recently to challenge its supremacy. Most other carmakers that offer a midsize-SUV have opted to offer something different from the Creta, such as the Kushaq and Taigun, which are meant to be fun-to-drive alternatives. However, the MG Astor is the only one that seems to be able to match it — and even surpass it — on the things that Hyundai prides itself on; technology and creature comforts. But is the MG a match in all the other, equally important aspects? That’s what we’re going to find out. 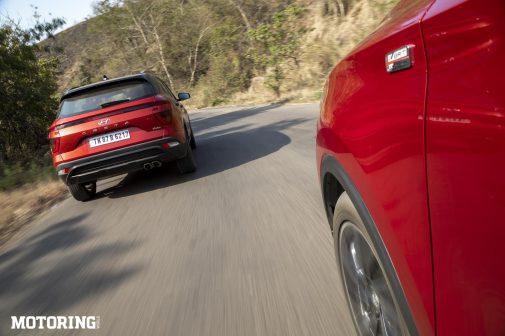 Let’s then start with one of the least talked about details of both these models — the kind of driving experience on offer. A look at their respective specifications sheets will show that despite being labelled a 1.4-litre turbo-petrol engine, the Creta’s four-cylinder unit has just 4 cc on the Astor’s 1.3-litre turbo-petrol motor. The Hyundai also has a 2.24-kgm advantage, but it’s not something that you can truly tell on the road, even though it comes in from a low 1500 rpm. And that’s down to the relaxed dual-clutch automatic gearbox Hyundai employs. 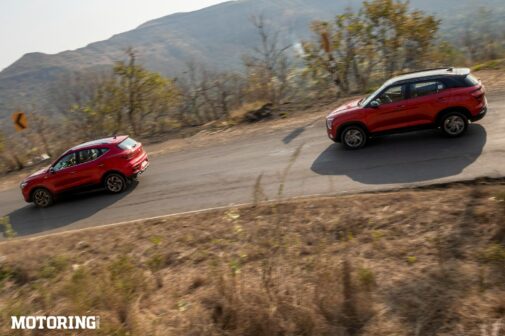 Using the paddle shifters and Sport mode helps make the Creta a bit, well, sportier, but other than the N Line range, Hyundai’s cars aren’t aimed at enthusiasts. There’s a bit of torque steer that kicks in when the accelerator is pressed hard, and the seven-speed auto hesitates before kicking down the ratios when needed. It’s best to leave the Creta in Comfort mode, and build speed in a calm manner. Despite all this, the Creta 1.4 Turbo is quicker to 100 kph and faster overall than the Astor.

That’s not to say that the MG is a slouch. The Astor’s refined three-pot engine has enough pep to out-accelerate the Creta till about 60 kph, after which, it gives ground to the Hyundai. The 138-bhp engine gels rather well with the six-seed torque convertor automatic, but, like the Creta, the Astor is tuned for smoothness, rather than performance. The manual mode on the gearbox does provide greater control, but paddle shifters would have made the Astor a little more engaging.

Considering both SUVs are oriented towards comfort, it isn’t all that surprising that they provide a cushy ride. Both, the Astor and the Creta are impressively supple at low speeds, though the Hyundai has the slightly better high-speed characteristics — there’s a bit too much bounce from the rear of the Astor. What this also means is that neither car will deliver the same sort of thrill as say the VW Taigun or the Skoda Kushaq. Still, it’s the MG that is slightly better balanced around corners, though not by all that much. It wallows and pitches comparatively less, and even body roll is better contained. Steering modes alter the weight of the unit successfully, but it doesn’t change the lack of feel coming from the steering wheel.

Both SUVs also come with all-round disc brakes that have enough stopping power to bring them to a halt quickly. However, whether it’s due to something inherent in the Astor or whether it’s the Level 2 autonomous technology that comes standard with this top-spec Savvy variant, the MG feels marginally safer. Still, the Advanced Driver Assistance Systems (ADAS) aren’t the most effective in themselves. The adaptive cruise control isn’t the most intuitive at judging the speed of traffic, and the quality of the display for the 360-degree camera and the rear cross traffic camera could have been far better. The lane keep assist, the autonomous braking, and the automatic high-beam control (which will dip the high beams if it detects an oncoming car) do work rather well.

There are a few features that the Creta has that the Astor does not, such as ventilated front seats, a reclining rear bench, rear sun shades, and wireless phone charging. And that’s quite commendable. After all, it’s been two years since this second-gen Creta arrived. In fact, you don’t really feel the lack of features, even in comparison. What you do feel as you step into the Creta Turbo’s cabin, is that it’s a tad dull. The Hyundai’s all-black cabin with red highlights is spacious, but it no longer feels as special as it used to. Especially in light of the Astor’s leatherette swaddled red and grey interiors.

Neither SUV will be a cause for complaint in terms of the quality of materials used inside, or the space available to fit five passengers, and their luggage. Nonetheless, if you’re going to have three sitting in the back, the Creta will offer more shoulder room. On the other hand, I prefer the Astor’s well-cushioned seats (both front and rear), to the Creta’s seats, though it’s only something I came to realise after driving both, back-to-back over a long distance. 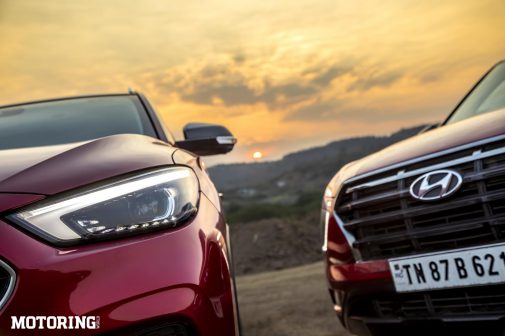 I have to admit, I like the design of the Astor, particularly in the present company. Details that stand out include the smart-looking LED lights all around, the dynamic 17-inch alloy wheels, the red brake calipers, and faux dual-exhaust housings. The Creta’s bold exterior design has yet to grow on me, though even there, it does have a more SUV-like quality to it than the Astor’s crossover-like stance. Nonetheless, between the two, it’s the MG that I think would attract more people, though as they say, looks are subjective. 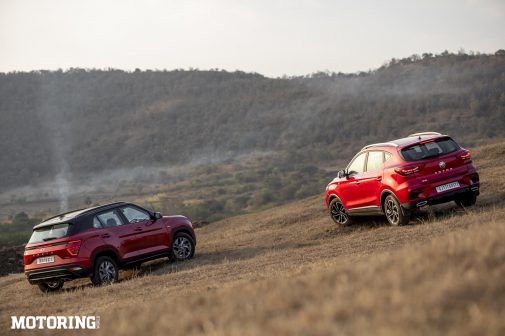 In the end, this comparison comes down to the price, as other than the extensive list of features — from the gimmicky AI assistant to the potentially life-saving ADAS tech — the Astor and Creta offer a very similar, and quite premium, drive experience. The Astor Savvy you see here costs a whole Rs 56,000 less than the Creta SX(O) DT Turbo on these pages, which swings the votes in the MG’s direction. Now, that’s something I wasn’t expecting but there is a bright spot on the horizon for Hyundai as the facelift for the Creta is expected to arrive later this year. In the spirit of one-upmanship, it’ll come with even more features, and there’s even word that it could get autonomous tech as well. It might be an even closer competition between the Astor and the Creta, and I can’t wait to find out which I’ll be picking.