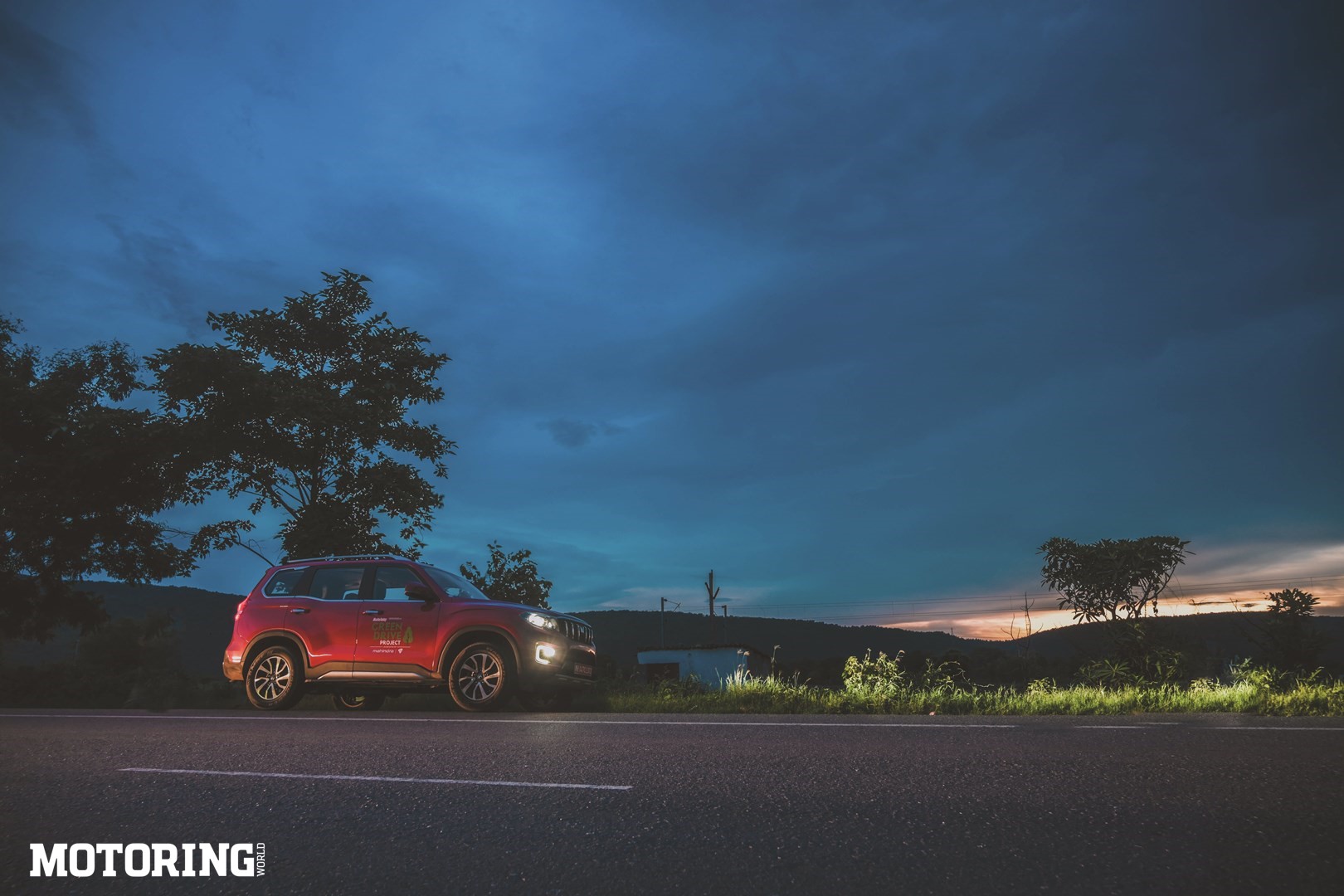 I am of the opinion that nothing is a proper adventure if there isn’t adversity to overcome. Mahindra had arranged for a somewhat ambitious drive experience for its new Scorpio-N, with a mission that underlined the unity and eco-friendly nature of the brand. Starting from Kandivali in Mumbai, the Green Drive Project had teams of journalists drive to the four corners of India, collecting soil from various cities along the way, along with a few trees for planting. The aim was to reach the furthest corner, and then plant the trees using the soil collected en-route, to show that there is growth in unity. 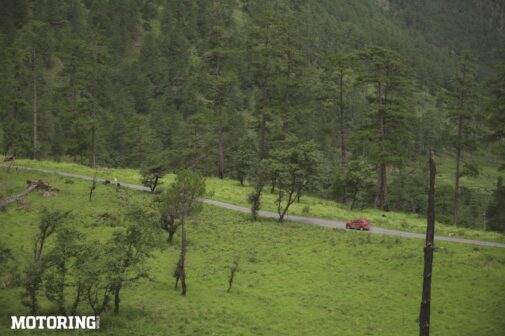 I didn’t have the opportunity to join the convoy right at the start, but I joined the team that was on the eastern leg for the most exciting part — from Dibrugarh in Assam to Kaho in Arunachal Pradesh. The village of Kaho is as far east as you can go while remaining in India, and the road to ‘India’s first village’ is a treacherous one, despite the Border Roads Organisation doing its best to keep the thoroughfare in the best condition possible. After all, these are the same roads that are used by the Indian armed forces, and they need to be in passable condition to reach those remote locations.

It was surprisingly hot and humid as I landed in Dibrugarh — the effect of the mighty Brahmaputra flowing nearby — and I waited for the convoy to reach me. It was, understandably, delayed, as the intrepid journos who had driven all the way from Mumbai — via Nagpur, Raipur, Ranchi, Kolkata, Bagdogra, and Guwahati — had covered about 3750 km in just 9 days, and were trudging along, tired and sleepy. We left Dibrugarh in the late morning, and headed to Tezu in Arunachal Pradesh, a relatively short 149-km drive, which took us most of the day. 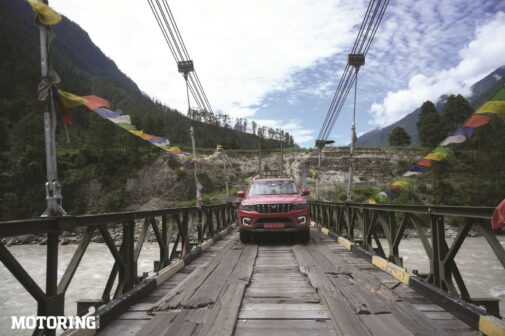 That was because the day included a stop for lunch (where we quickly ate a scrumptious thali with broiled and roast chicken), a stop for petrol for the one Scorpio-N with the refined, but the thirsty 2.0-litre turbo-petrol engine (at least a bit thirstier than the torquey 2.2-litre diesel engine), and some photographs and videos against the spectacular backdrop that are Assam and Arunachal Pradesh. We also bought some beautiful green ferns to plant when we reached Kaho and were delayed along the way by something I hadn’t expected in rural parts of the North-East — gridlock.

It wasn’t that traffic was heavy, but those roads are, by and large, single-lane dual-carriageways, and a single broken-down truck blocked our way for a good 45 minutes. Still, we made good progress when we weren’t hampered by landslides (we encountered two on the way) and battered vehicles, and reached the Golden Pavilion (our stop for the night) in Tezu in the evening. We had an early start scheduled for the next day, so we hastened to a nearby local eatery. I was looking forward to the cuisine I was about to — rather ravenously — dig into, having sampled some back home. 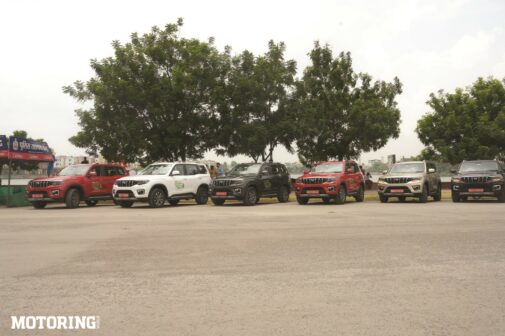 The vast portion, the easy-on-the-pocket price, and the fact that each dish had been made with whole spices filled me with joy, and gluttonous greed. I wolfed down multiple rice balls wrapped in leaves, drenched each of them in the aromatic pork broth, with liberal servings of the fern-like veggies. After a more than hearty meal, we settled down for the night.

We awoke to the sounds of heavy rain, which didn’t bode well for our journey — the heavier the rain, the greater the likelihood of encountering landslides. A packed breakfast was collected, and we tried to make our way out as fast as possible. It wasn’t surprising that the powerful Mahindra engines brought us up to highway speeds (and beyond) quite quickly, but what did come as an absolute pleasure was how well the Scorpio-N handled whatever was thrown at it. Rocky, barely cleared rubble from a recent landslide? No problem. A waterfall created by a recent landslide right onto the main thoroughfare? Easy. Clambering up and down slushy, mucky remnants of an older landslide after a heavy downpour? No sweat.

Mind you, I was driving the 4×2 version, and so unhindered was my driving experience that at no point in time did I feel the need for the 4×4. I can’t imagine just how confident those guys were feeling. I was given the honour of carrying the ferns we were to plant once we reached, and so I had to be careful. I relished the opportunity to push my driving skills in this manner — keeping pace with a convoy, enjoying the almost unbelievable drive experience this Scorpio-N was delivering, and keeping four top-heavy ferns from tipping over and spilling soil all over the back seats.

After a late lunch stop along the way at a dhaba-type installation, we headed on to Walong, which would be our stop for the night. We managed to arrive just before sunset, and the vistas of the Lohit River and the Arunachal hills as the sun goes from yellow to red, was breathtakingly spectacular. Kaho was still 50 km away, and the plan was to rest up, be up bright and early, plant the trees, and then start our 380-km journey back to Dibrugarh, via Tezu. To wake up to the roar of a mighty river gave the whole thing a rustic aesthetic, which juxtaposed the comfort of the Scorpio-N in a bemusing way. 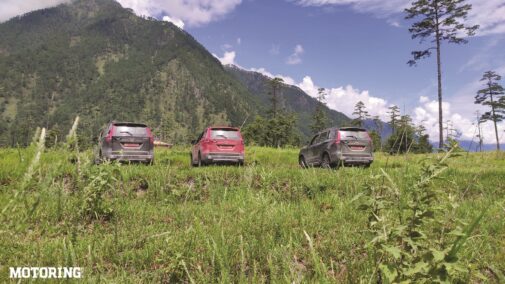 That front seat had taken my large bottom through some pretty rough terrain, and had kept me cool and comfortable for mile-after-mile of super-smooth highway, slushy paths, and rock-strewn roads. As we approached Kaho bright and early, the military presence was noticeable, and our Inner Line Permits were asked for. This is a contested area after all, and not anyone can just walk in as they please. The soldiers were friendly enough after the formalities had been met (and thoroughly double-and triple-checked), and they welcomed us past. 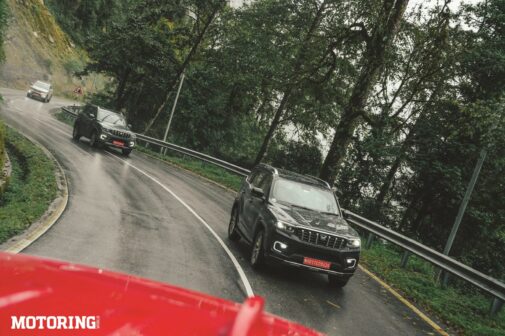 At the school in Kaho, we met with the representatives of the village, some of the elderly citizens, and nearly all the children that are enrolled there. We planted our trees with the help of the locals, added our soil, shook hands, stood for photographs, and then swiftly headed back out. It was a bit later than we had hoped, and the 10- 12-hour drive (depending on the landslide situation) would see us arriving quite late in the night. Still, there was always time to enjoy one cup of the local butter tea, made from tea leaves, yak butter, water, and salt. 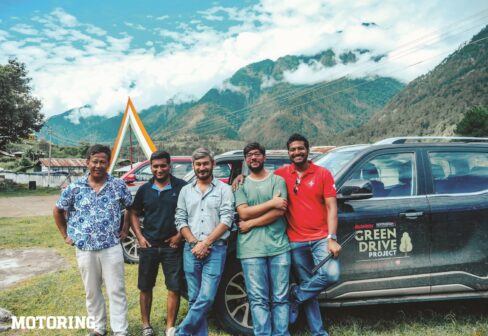 That was the only pick-me-up we would get for a long while. We did carry snacks, cartons of water, and energy drinks, but nothing ‘fresh’, if you know what I mean. I did manage to pick up some lovely black tea the next day from the airport, but there was very little time to do anything else, as we arrived in Dibrugarh quite late in the night, and my flight was early enough that sleeping in wasn’t an option. As the plane took off from Dibrugarh airport, soaring above the vast and spectacular Brahmaputra, I couldn’t help but admire all that I was leaving behind. 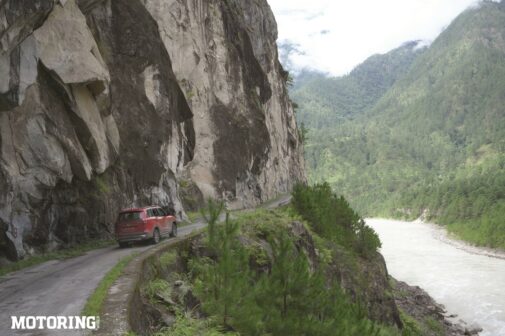 The Scorpio-N made what should have been a nerve-racking and hazardous, near-800 km journey, a pleasure, and one of the best driving experiences of my life. Driving in a convoy — when that synchronicity between the drivers hits — is always a severely gratifying experience, and the variety of terrains, along with the capabilities of Mahindra’s latest SUV, made it all the better. If I find the time, I’m definitely going to try and recreate this drive in the Mahindra Scorpio-N, but maybe at greater leisure. I’ll take my time and truly take in the wonder that is that part of the North-East. I hope I can do just that quite soon.