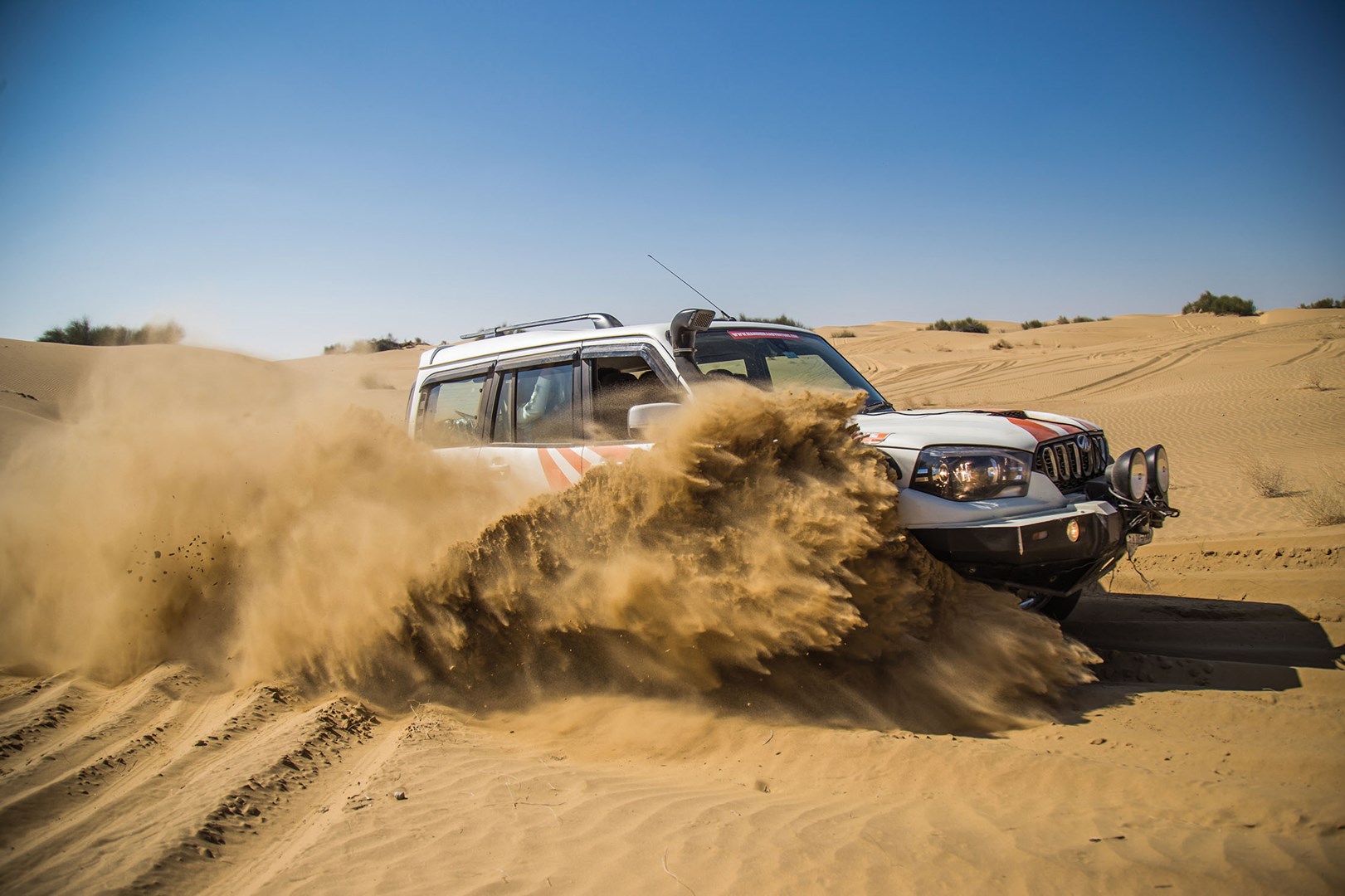 I’m not much of an off-road person, I prefer to get my thrills on solid tarmac, but even I know not to decline an invitation that offers to take me to Jaisalmer and teach me how to drive on sand dunes. Especially when it happens to be the instructors at Mahindra Adventure’s Desert Survivor training academy set up on the Sam dunes outside Jaisalmer. Mahindra Adventure has an amazing, vast facility in Igatpuri where most of their training events take place, but the Desert Survivor and Snow Survivor are two courses that take place off-site, because it’s easier to take the academy to the snow and dunes than the other way around. 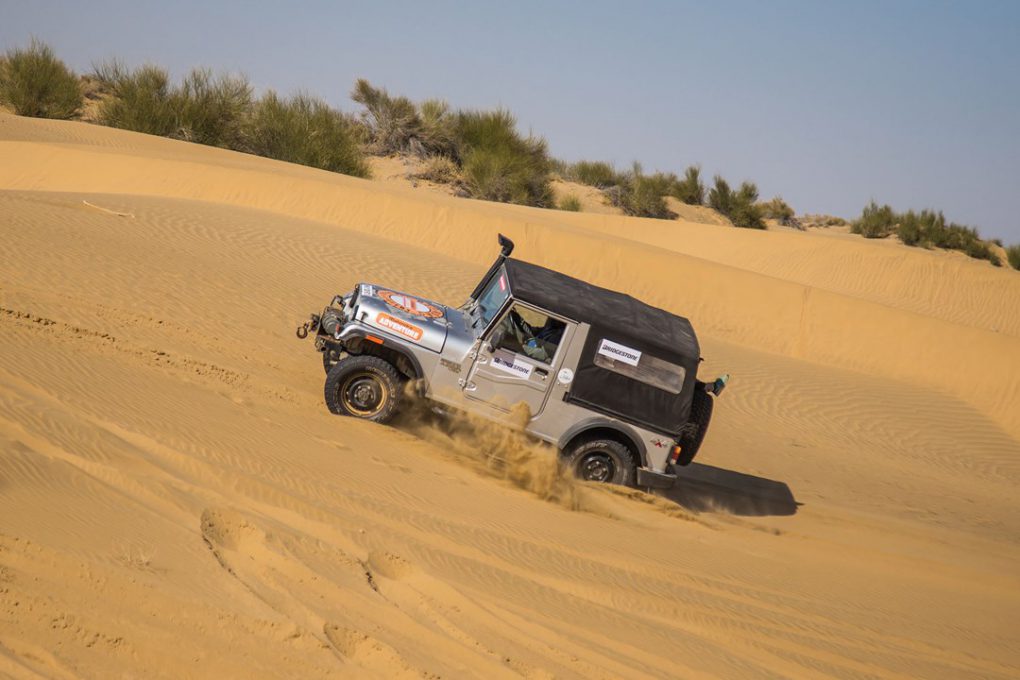 The Desert Survivor course started off easily enough, with an opportunity to get used to the Mahindra Scorpio 4×4 on the arrow-straight roads of Rajasthan as we drove from Jodhpur to Jaisalmer. We reached the hotel just as the sun was setting and were greeted by the sight of eight more Scorpios and one grey Thar standing outside the hotel. After a quick break, everyone paired up and got into their assigned cars, and I found my car being used as the lead car. Now, I’m not experienced enough to lead this group through the parking lot, let alone the dunes. So I hopped into the only empty car, which happened to be the Thar which was originally supposed to be the lead and recovery car. But because it is so much more capable than the Scorpios, the instructors decided to use a Scorpio to lead instead, to make sure all the cars could clear the obstacles. Oh well, the Thar would have to do. Hehehe. 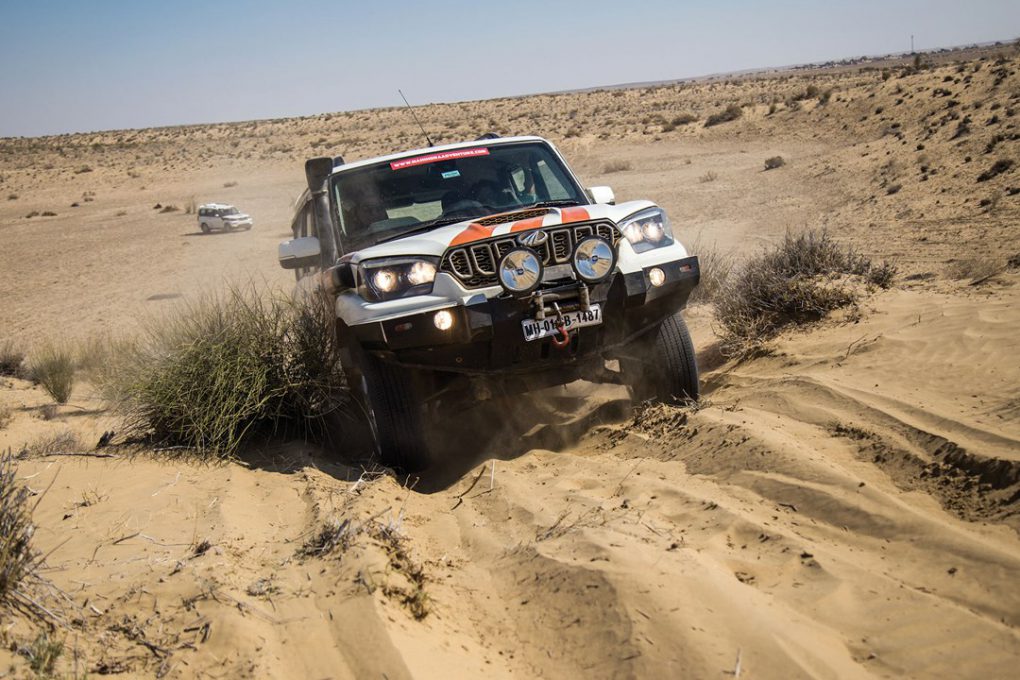 We headed into the desert in complete darkness with 4L engaged, and the instructors first let us have a go at the dunes on our own, just to see what we’d end up doing. So naturally, just about every car ended up getting stuck, even me in the supremely capable Thar. This brought us to our first lesson — know when to stop! If you think you won’t be able to make forward progress, stop and reverse out. Continuing to spin your wheels will only end up beaching you, but if you back up you can take a different path the next time. 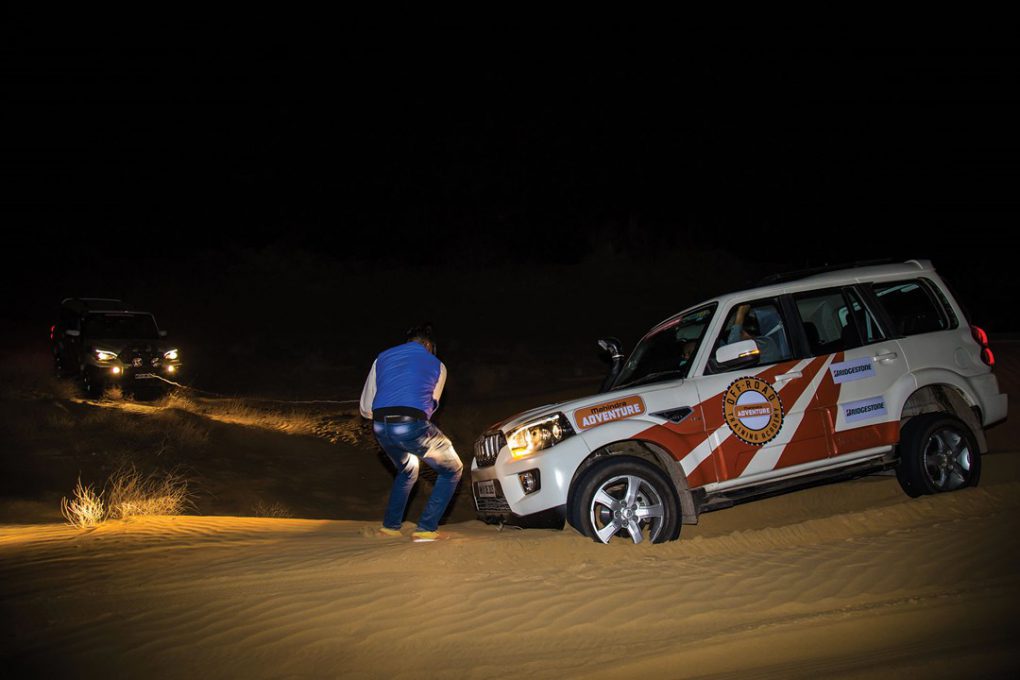 Lesson number two for driving in the sand is to let momentum carry you forward. It’s not about absolute speed out on the sand, but about constant speed. So I took to the same dune again with my newfound knowledge; I backed up a fair distance and kept my revs high, and the Thar climbed it like it was nothing. Once I got the hang of it, I spent the rest of the night helping recover stuck cars with the winch. In the right hands, the Thar is absolutely unstoppable, even with the ‘wrong’ tyres for the terrain.

Knobby tyres are great for rock-crawling, but on sand, a wider tyre with a bigger contact patch is needed. Regardless, the Thar was driving literal circles around the Scorpios to get in position to use the winch. Where the Scorpio drivers had to worry about scraping the plastic bumper, the Thar had no such concern. The metal bumpers were mounted high, giving it excellent approach and departure angles. Although we only tackled easier obstacles at night, the fear of getting completely lost in the darkness added an additional layer of thrill to the expedition.

The next day, we set off for the dunes again, and in broad daylight I realised just how vast the dunes were. This time, we were going to tackle the taller dunes and we learnt another important lesson. The trick to not toppling when attempting a steep climb is to use gravity to your advantage. When climbing a steep dune, if you think you’re losing momentum on the way up, slowly steer the car down the slope in a wide arc and use gravity to bring you down. Steering against gravity is a recipe for a disaster as the weight shift might topple already tall SUVs.

I thought driving on the sand at night was pretty exciting, but it gets so much better when you can actually see where you’re going. With constant guidance from the instructors over the radio, we set off taking on even taller sand hills. It seemed like we were facing dunes that were impossible to climb, but before we knew it, we were on top of them, scouting for the next big climb. Funnily enough, getting up seemed like the easy part, it was cresting the hill and coming down that had the tendency to make your stomach drop a bit. Especially when you’re carrying a significant amount of speed as you crest a hill and you don’t know what’s waiting on the other side. Having a spotter here helped immensely and we all made it through without any mishaps.

Again, because I was driving the Thar, I helped out with recovery duties. You don’t realise how powerful a winch is until you see it pull a two-tonne vehicle out of deep sand, uphill, without breaking a sweat. You also realise how much tension and force are going through the cable when it’s fully taut. All the more reason to stay away from it while the winch is doing its thing. 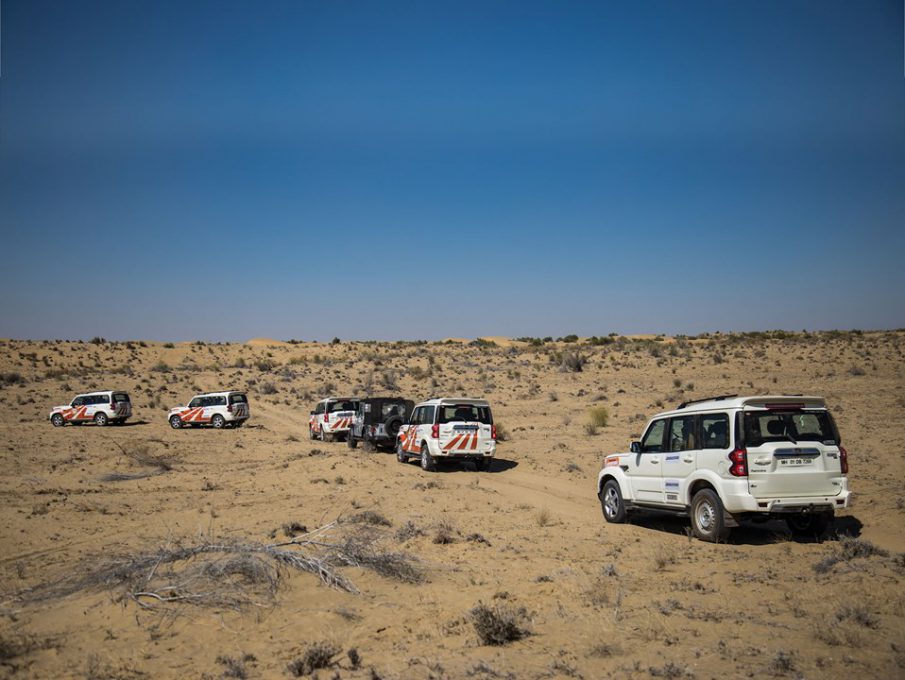 Now I have to come clean, I did manage to beach the Thar once. On the way to recovering another car, I was a little too throttle-happy and did exactly what the instructors told me not to and spun up the wheels. So, I managed to beach the most capable car there, but not to worry, that winch was going to pull me out, right? Nope! Apparently, I was stuck so deep that the only way out was to start digging. We did just that and in a few minutes, the Thar was ready to go again.
At the end of the second day, I came back with a lot more respect for the desert and a whole lot of love for the Thar. I know there is a lot more to learn and that I’ve barely scratched the surface of what the Thar is really capable of. I think everyone should take the Mahindra Desert Survivor course, not because driving on our roads after the monsoons makes you long for the smooth sand of the desert, but because it teaches you invaluable car-control skills in a controlled environment. And the most important thing — it’s fun!