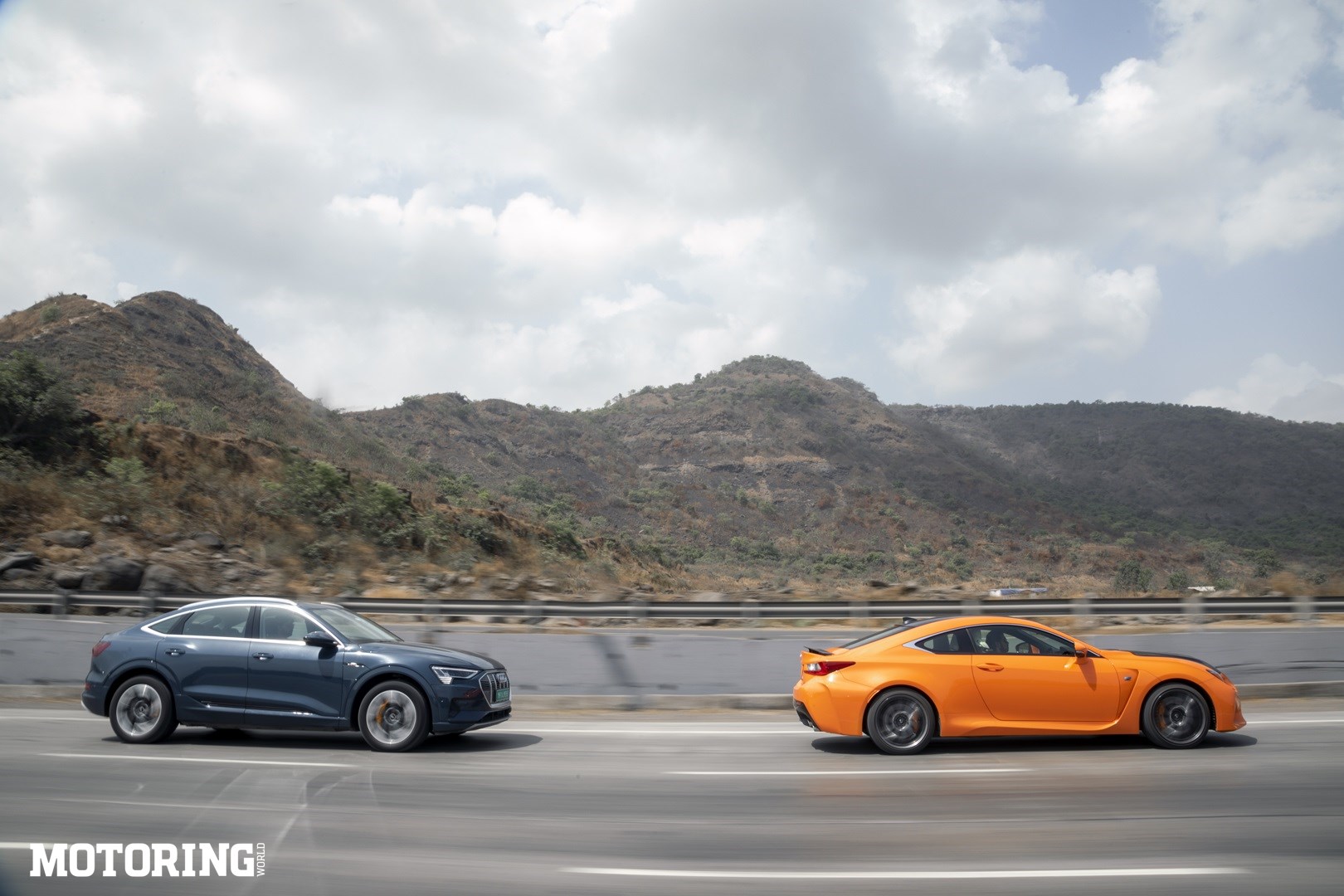 There are some days when I wake up unhappy about how the world is moving to electric cars, and then there are days when I am hopeful about the future of electric cars. Recently, it was the Tata Nexon EV Max that renewed that hope, and when I figured out a way to get my hands on the Audi e-tron Sportback, that sense of hope surged. This is the future, or at least one of the many ways it’ll go. Besides the all-electric powertrain, the e-tron Sportback also possesses a popular direction for design — an SUV with a coupe-like silhouette is what buyers seem to be keen on. 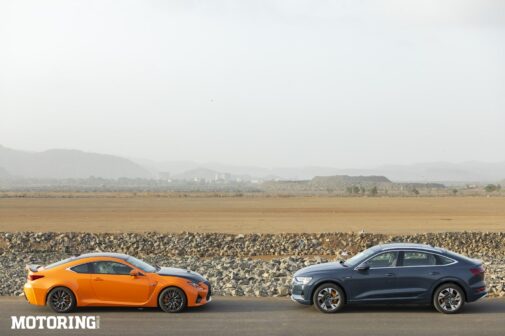 However, to keep things in perspective, I needed something that exuded old-school charm. A car that was as traditional and orthodox as it could get. The best counterpoint I could get my mitts on was the Lexus RC F. After all, you can’t get more old-school than an orange and carbon fibre trimmed coupe with a naturally aspirated V8 engine, can you? I find it especially charming because Lexus’ stable is full of decent-handling, somewhat sedate machines.

When lined up next to each other, the e-tron Sportback is the picture of big and strong, along with modern and practical, while the RC F looks like the cars in the posters that used to adorn our bedroom walls. It’s loud in a way that’ll draw the eye of anyone on the road, and I don’t just mean the howl of the V8. I was surprised that despite its low slung stance, massive and speed breakers weren’t an issue, and that’s down to the relatively short wheelbase. 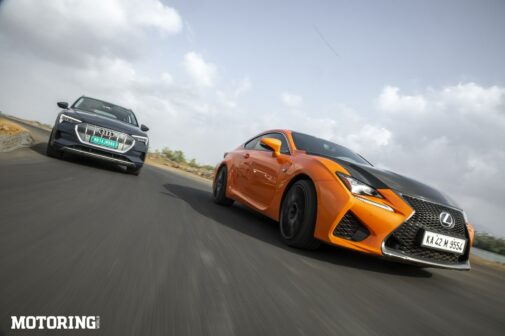 Both cars here follow their brand’s respective design languages to the T, and look goddamn desirable, especially from the rear. The e-tron Sportback’s tastefully sloped roofline gels beautifully with those long, tapering LED tail lights, and the faux exhaust vents on the rear bumper add to its sporty appeal. The Lexus’ L-shaped tail lights look almost staid in comparison, but the pop-up carbon fibre spoiler adds more than the requisite drama. For a large SUV, the e-tron does an admirable job of looking low to the ground, but there’s no fear of scraping its bottom. 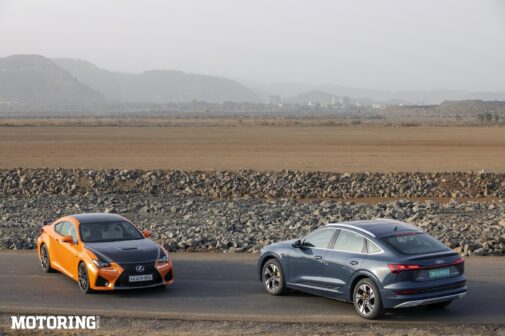 I admit I’m not a fan of the SUV taking over every aspect that used to be unique to a sports car, but the e-tron pulls it off well. In the same way that the ‘Plasma Blue Metallic’ paint shade underlines Audi’s all-electric nature, the bright orange and black Lexus highlights what the RC F is all about. In fact, the contrast is further underscored by the practicality of each of the cars here. Other than the raked roofline that eats into headroom at the rear, the e-tron Sportback is a very sensible and pragmatic choice. Five can sit in comfort thanks to its dimensions and at no point will anyone have complaints about the space on the inside.

On the other hand, the RC F isn’t the most practical car out there, and considering it’s a two-door coupe, it doesn’t need to be. There’s no pretence of it being that either — the front seats cosset and hold you firmly in place, and even come with heating and ventilation, something the Audi does not get. However, the rear seats are all but for show. Getting to them is a bit of a pain, and space in the rear bench is laughably little. It’s not the most modern cabin either, a feeling that’s accentuated when you use the fiddly touchpad on the centre console to go through the displays on the smallish infotainment screen.

Meanwhile, the Audi e-tron’s dashboard is the picture of modernity, with large (and very easy to use) touchscreens for the AC controls and infotainment, and a nearly as large (and extremely legible) digital instrument cluster. Other than the heated and ventilated front seats and the heated steering, the Audi is better equipped, adding to the sense of practicality. And speaking about their respective practical applications, this was the first time a petrol car gave me range anxiety. The MID on the Lexus told me that I would be able to go about 350-odd kilometres with its 66-litre fuel tank, which is about what I’ll get from the e-tron’s 95-kWh battery on a full charge.

The e-tron Sportback and the RC F are at different ends of the spectrum, as the Audi makes a lot of sense for those looking for a big, powerful, eco-friendly, and modern SUV. Meanwhile, the Lexus is, to quote one of my favourite books by Douglas Adams, ‘Totally mad, utter nonsense.’ And like the end of that quote, which goes, ‘But we’ll do it because it’s brilliant nonsense,’ I’m so glad Lexus has done something like this. The way both drive shines an even brighter spotlight on why this is true. 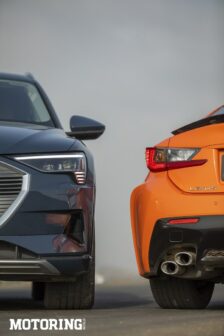 For the RC F, it all starts when the raucous 461 bhp V8 starts up. It’s extremely rare to hear the unrestricted growl of a naturally aspirated V8 engine, and it’s truly a once-in-a-lifetime experience. From growl to shriek, there’s just something about the aural orchestra that moves me to tears of joy. It sounds especially pleasing in the 5000-7000 rpm range, making you want to shift down when it’s not required in the least. The 8-speed automatic gearbox is accommodating enough, both in the city and blasting through tunnels on the highway, though it isn’t among the slickest of its kind.

It’s a little surprising that before you cross the 3500 rpm mark, the RC F is on the sedate side. It’ll trudge along in traffic like anything else on the road, but honestly, this engine is best enjoyed at full blast. The linearity of the push from the 53.7 kgm of torque produced is addictive, and so scarcely seen that it’s an absolute marvel. The traction control kicks in quite hard (and rather effectively) when you slam the go pedal. So hard that I wouldn’t recommend switching the system off unless you’re in a space where you can safely explore just how much wheel spin you’d get. 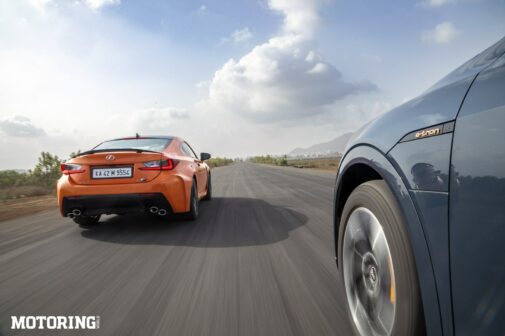 Cornering hard in the RC F will also require a higher level of skill than most will possess. All that power and torque goes only to the rear wheels, making it quite eager to step out of line. The slightly soft suspension does aid in everyday driving conditions but does the Lexus no favours around a set of twisties. In contrast, the low-profile tyres deliver great grip, but need to be mothered on sharper ruts, which filter through, causing a wince every time. 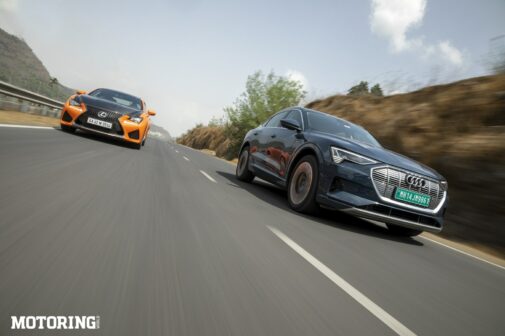 In a complete 180, accelerating hard in the e-tron Sportback is almost a silent scream. You do hear the 402 bhp electric motor whirring away when standing outside, but from the driver’s seat, it’s a complete hush job. It’s quite commendable that despite the 800 kg disadvantage, this 2.6-tonne SUV is just a little over a second slower than the RC F to 100 kph from a standstill. The 67.70 kgm of torque the electric motor develops helps in that regard, and the surge that pushes you back into the seat is thrilling. It’s too bad there’s no sound to go along with it.

The weight of the battery pack tucked under the seats also helps the e-tron Sportback move like few other SUVs. There’s a very confidence-inspiring weight around corners, without the attendant body roll. The suspension soaks up bad roads, and yet, it feels composed in tight corners at speed. The thick tyres also help in that regard, rounding off creases well, but their low-rolling resistance also means that grip levels aren’t too high. Still, it’s commendable just how fun the e-tron Sportback is to drive, and it goes with the overall sportiness of the SUV. 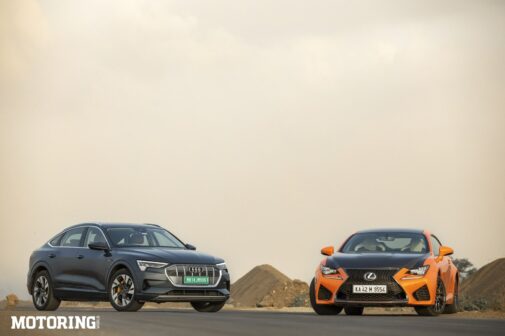 For the Rs 1.19 crore you spend on it, the Audi e-tron Sportback makes quite a lot of sense. You get to feel like you’re making a difference to the environment and get nearly everything else you could want from a luxurious, yet sporty large SUV. Meanwhile, at Rs 2.34 crore, ex-showroom, the Lexus RC F makes little sense from a practical standpoint. However, that V8 engine nearly makes whatever money you’re going to put down on it worth it — nearly.