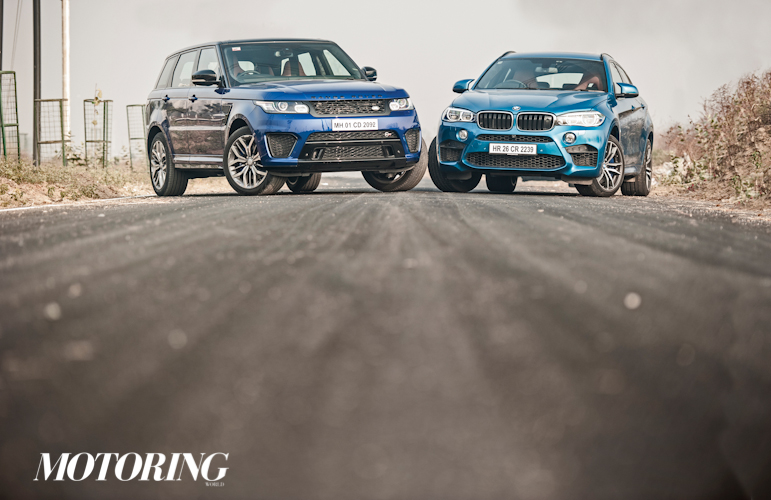 I feel like a referee caught between two sumo wrestlers, only worse. The more I try to separate them, the more I’m buried under the twin cargos of excessive luxury and outrageous power that these two vessels of overindulgence carry in abundance. The BMW X6 M and Range Rover Sport SVR don’t even make any sense. Their diesel-powered versions are more than enough for anyone in their right mind to take home and enjoy life. But then these two are hardly built for someone in their right mind; their makers, instead, took these two to the Nurburgring and gave dedicated sportscars some proper scares. These are two SUVs (can we even call them that anymore?) that are pretty straightforward about their ferocity. And that makes this a story worth telling.

Look at what they brought to the ‘Ring. The M: 567 bhp, 76 kgm and 2340 kg of German portliness. The SVR: 542 bhp, 69 kgm and 2335 kg of British corpulence. In addition to these larger-than-life numbers, both also pack enough computing power between them to make half of Silicon Valley go giddy. However, what I cannot fathom is how, despite giving away 25 horses, a handy 7 kgm and gaining an advantage of only 5 kg, it was the SVR that was quicker around what they call The Green Hell by a full six seconds (the M: 8:20 min, the SVR: 8:14 min). Maybe it’s true, maybe it isn’t. Thankfully, six seconds aren’t good enough to do anything fruitful with your life, so this topic is moot. The only people who’ll argue over this are Webizens or Netinians or whatever they’re called; people who will never go anywhere near these cars, in short. For if they do, they will see what glorious beasts these are, wild and exotic.

The X6 M is the ultimate steroidal transformation of one of my favourite cars, the normal X6. Yes, I suppose I’m a sucker for weird-looking things. The M, of course, receives a sharpening of aesthetics all over its person to announce its performance-biased prerogatives to the world. The SVR, on the other hand, manages to out-Dubai even the M on the ‘what the…’ scale of things. Perhaps it’s because I’m used to thinking of Range Rovers as paragons of stately elegance, but that colour is just…. Anyway, as far as sheer shock value goes, the SVR walks away with the bakery. Considering the M’s own presence is hardly that of a wallflower, that’s saying something and then some  to eternity.

However, beauty (or the lack of it) is only skin deep and under their metal hides, these two carry propulsion systems that do full justice to the word ‘powerplant’. Both their engine bays star massive V8s, though only the Americans might object to my useage of the word ‘massive’ here. In any case, the BMW goes the whistling way with its twin turbochargers, while the Range Rover chooses to whine away with its supercharger. The difference in the mechanical benefits and shortcomings of either, however, are as apparent to me as the sun at night.

Both the M and the SVR are stupidly fast; each makes a mockery of speed limits with alarmingly little effort. I always observe, with an equal mix of fear and wonder, how fast and heavy cars like these seem to provide an XXXL-sized helping of something I don’t feel in lower and lighter automobiles: momentum. They feel unstoppable, which may or may not be a good thing, depending on what fills your windshield. Honestly, the way these two get near the 200-kph mark on their respective speedometers is equally scary, even though it’s the X6 that gets there quicker. However, if I am to be equally honest, it’s the SVR that is more fun, there’s no doubt about it.

On its own, the M is a fantastic thing to drive and it’s better than the SVR in almost every possible road-biased condition. It feels taut and poised around you which is a huge confidence booster. But the SVR is something else, really. With the SVR, Land Rover says, it’s made its most powerful vehicle ever. What it forgot to say was that it’s done it in style. Or maybe they did, but I was too busy with motorcycles to pay attention. The SVR, if it’s possible, feels even more special than a regular Range Rover. And a big part of this effect is the primal V8 roar it unleashes upon the world.

From the way it sounds, especially with the windows down, the SVR’s exhaust system seems to be nothing more complicated than a quartet of four straight pipes making their way from the engine to the rear bumper. Of all the cars I’ve driven, only the F-Type R, from which the SVR borrows its motor, sounds wilder. Around town, the SVR is content to burble along peacefully, only occasionally scaring traffic with a sudden acceleration-induced roar. Show it an open road, however, and it goes hysterically mental. It’s not a barebones-racecar speed that you experience, but an eye-watering velocity awash with luxury. More importantly, the more you drive it, the more you realise that few cars today are this special.

That’s not to say that the SVR turns the X6 M into a doormat. Far from it, actually. The BMW easily has the measure of the Range Rover when it comes to driving dynamics, Nurburgring lap times notwithstanding. Acceleration is even more pronounced in the M, though the relatively quieter exhaust pipes are a gross injustice. And it’s only because the SVR is next to it that the M feels like less of an occasion to drive despite being quicker everywhere.

The M might have the edge when it comes to numbers, but in the real world, it won’t get away from a chasing SVR. In my books, they are evenly matched in the speed stakes. And their ‘Ring antics are stonking tributes to the level of handling achieved by these SUVs. I cannot bring myself to say, ‘They handle well. For SUVs, that is.’ They just plain handle well, and considering both of them weigh over two tonnes each, well, that’s  just incredible.

These days, a lot of cars come with performance-division badges on their fronts, flanks and backsides and ultimately, quite a few of them turn out to be a bit underwhelming. The SVR, though, earns every letter stuck onto its body. It’s a car that brings out the most thrills and emotions of driving, something that every performance-badged car should strive for. In fact, I don’t think there are enough letters on it to do it complete justice. And this belief is reinforced every time I enter a tunnel, an underpass or go past any sound-reflecting structure. Suffice it to say that ‘It’s nice, but it’s not an SVR’ will be an oft-used phrase for all cars henceforth. The M is far from boring; it’s an excellent car and the more accomplished of the two, but, as incredible as it may sound, it pales a bit in comparison to the SVR. I just wish I had met it alone.

If you think these two are exorbitantly priced, you’d be absolutely right. With the idiotic import-duty structure of our land, it’s impossible for cars like these to be value for money in our country. However, these two arrive from the Nurburgring, the end result of their combination of driving thrills fused with comfort cannot be judged in financial terms. These are landmark vehicles of today. And I beg those who can afford one of these, please don’t put a chauffeur in the seat that matters the most. Instead, do what I’d do: make a circular tunnel and drive the SVR in it  all day.