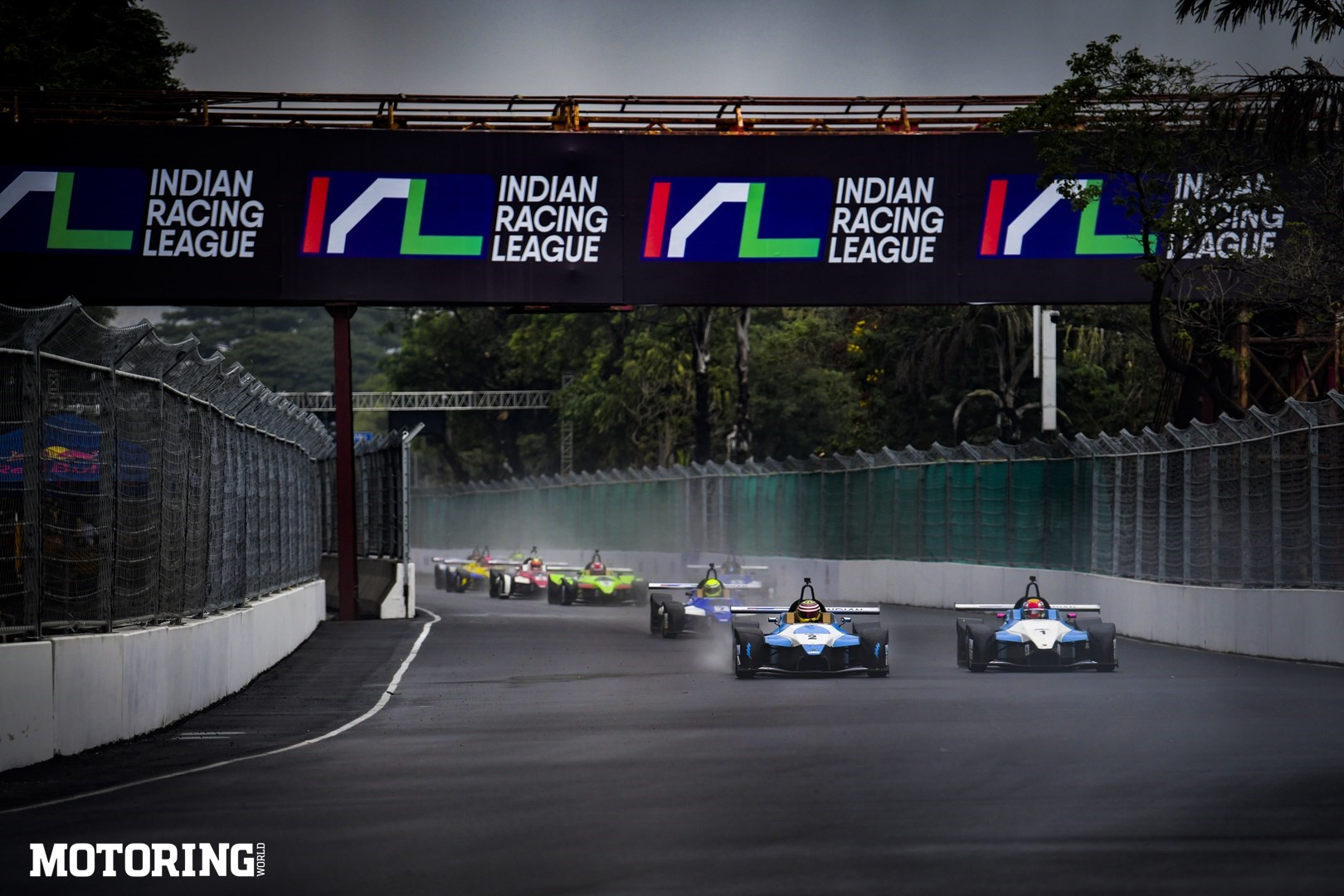 The break between the last Formula 1 race weekend and the first race weekend of a new season is always the toughest. This year, the final round of the Indian Racing League’s (IRL) inaugural season, which took place in Hyderabad, kept me occupied. Well, at least for a few days. I was also excited to see the new Hyderabad street circuit. 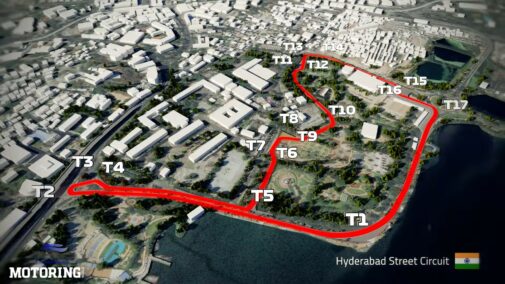 Yes, it’s the same street circuit that will be hosting, for the first time, a Formula E race in February 2023. All this is subject to approval by the FIA, by the way. A week before the E-Prix weekend, the FIA will carry out an inspection and then take a call. There’s still plenty of time for the Hyderabad Metropolitan Development Authority to smoothen the rough ends of the race track, and take all the learnings from the IRL race weekend.

The Format
The IRL features six teams — each team has four drivers with international and national racers participating, and one seat reserved for a female driver. Every team gets two race cars, and the four drivers in each team will be paired into two groups. One group is Driver A, and the other is Driver B. There can only be a maximum of 12 drivers on the track every session. 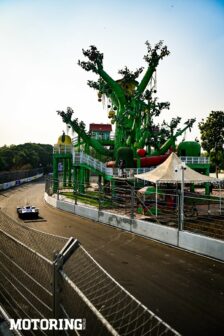 Each Sprint Race goes on for 20 minutes, and then there’s one more event, called the Feature Race. The starting positions are determined by the combined race results of the teams in both Sprints. As for the Feature Race’s length, the drivers get 35 minutes, plus an extra lap to the chequered flag. Again, it’s not that straightforward. Halfway through the Feature Race, every team’s drivers will swap seats with their paired partner during a 3-minute pit-stop window. This means if one of the team’s Driver A started the first half of the Feature Race, then after the halfway mark, Driver B takes over. The teams have to strategically decide which driver they want to start the race and end it with.

Only the top ten drivers on the grid who finish the races are awarded points, with the highest being 25, 18, 15, 12, 10, 8, 6, 4, 2, and 1 (for positions 1 to 10). However, in the Feature Race, there are double points on offer, and they are awarded equally to both the drivers in the team. For instance, if a team’s Driver A and Driver B finish the Feature Race first, they both are awarded double points, i.e., 50 points each. The drivers who clinch pole position in the Qualifying sessions and hold the fastest lap in any of the Sprint or Feature races, score one point in that session. 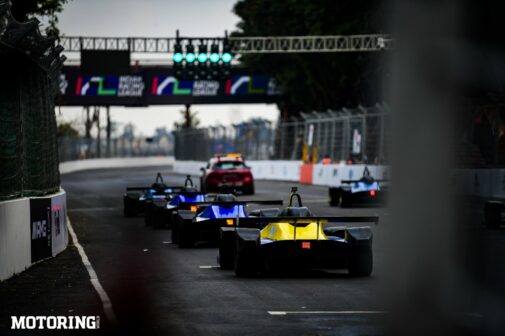 The Race Car
Since this is a spec series, you will see all the teams racing with equal machinery. This season, the drivers get behind the wheel of the GB08 Thunder race car, made by Wolf Racing. It sounds incredible at full chat, thanks to the 216-bhp 1099cc Aprilia RSV4 engine. Weighing nearly 370 kg, the GB08 Thunder is quite an agile race car on the track.

The Street Circuit
The Hyderabad Street Circuit is 2.82 kilometres long and is located in and around the Secretariat Complex. It passes through Lumbini Park, which is located on the shores of Hussain Sagar Lake. This street circuit features a total of 17 corners with a good mix of fast corners, long straights, and hairpin turns, and there’s even a chicane. Jon Lancaster had set the race lap record of 1:16.364 seconds.

The Racing
After watching the pre-season testing at MMRT in Chennai, I was really looking forward to seeing these brand new race cars perform on this iconic track. The first round was cancelled after the organisers and the Federation of Motor Sports Clubs in India directed the HMDA (the nodal agency) for five major changes — surface improvements, angle of banking, bitumen quality, double barricading, and increased parking spaces. Things weren’t looking great, but in the next two rounds, the cars and drivers spoke for themselves as they put on a spectacular show at the MMRT for rounds two and three. 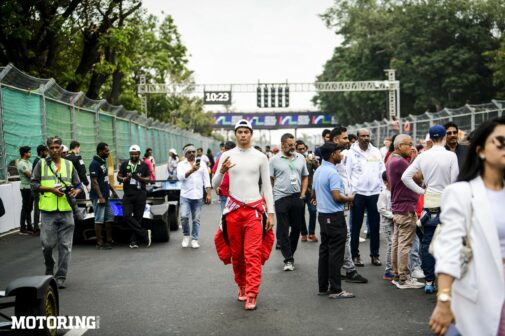 In the final round, on the streets of Hyderabad, and the battle for the Team Championship title was wide open. Hyderabad BlackBirds were leading comfortably by 59 points, and the GodSpeed Kochi team needed a miracle to beat the home team. Once again, the Hyderabad race weekend was off to a bad start as there were delays in Free Practice sessions on Saturday. All the remaining sessions that were supposed to happen on Sunday were postponed for an early morning start. It was going to be a long Sunday for the IRL teams as they had to prepare the cars for a total of six sessions, including Free Practice 2, Qualifying 1 and 2, Sprint Race 1 and 2, and the Feature Race. Everything had to go according to plan for them to complete all the races in time.

Sunday morning had another twist in the tale, as Hyderabad’s unpredictable weather added light rain showers making the track damp. With no real experience on the track, the drivers were risking everything by pushing the GB08 Thunder to its limit. As it started to pour heavily, we were all set for a thrilling Qualifying session in the wet. And the GodSpeed Kochi team did not disappoint, their team locked the front row in Qualifying 1 and Qualifying 2. The GodSpeed Kochi team was blisteringly quick in the wets and were running away from the pack in Sprint Race 1, until Fabienne Wohlwend’s (GodSpeed Kochi) car broke down, but Alister Yoong held his nerve as he lead from start to finish to clinch his first victory for the Kochi team, and keeping them in the hunt for the Team Championship title. Meanwhile, the home team’s Thomas Canning, who was filling in the big shoes of Neel Jani, finished fourth behind the Goa Aces duo. In Sprint Race 2, it was once again the two talented drivers, Nikhil Bohra and Ruhaan Alva of the Kochi team, who took the top step ahead of Kevin Mirocha from Goa Aces. It was two in two for the GodSpeed Kochi Team, the lead was now down to 23.5 points, as they went into the final Feature Race.

Unfortunately, things were not looking good for the home team, who were already down one driver this weekend, due to Lola Lovinfosse’s illness. It was all down to Akhil Rabindra, Thomas Canning, and Anindth Reddy to stop the juggernauts from the GodSpeed Kochi team. However, there was no stopping the charging young guns from completing a hat-trick of victories for the Kochi team as the dynamic duo of Alister Yoong and Nikhil Bohra won the Feature Race. Meanwhile, there was something to cheer for the home team as Akhil Rabindra won the Driver’s Championship title ahead of his teammate Neel Jani, with Alister Yoong in third place.

Watching these young talents fight it out with some of the most seasoned drivers from around the world was fascinating, to say the least. Heck, some of these drivers were racing for the first time on a street circuit! The numerous delays did not matter as the drivers put on a show for us to remember. Next year, I would love to see more races in different cities, and more cars on the track, and hopefully, it’ll serve as a platform for young drivers to showcase their talent.