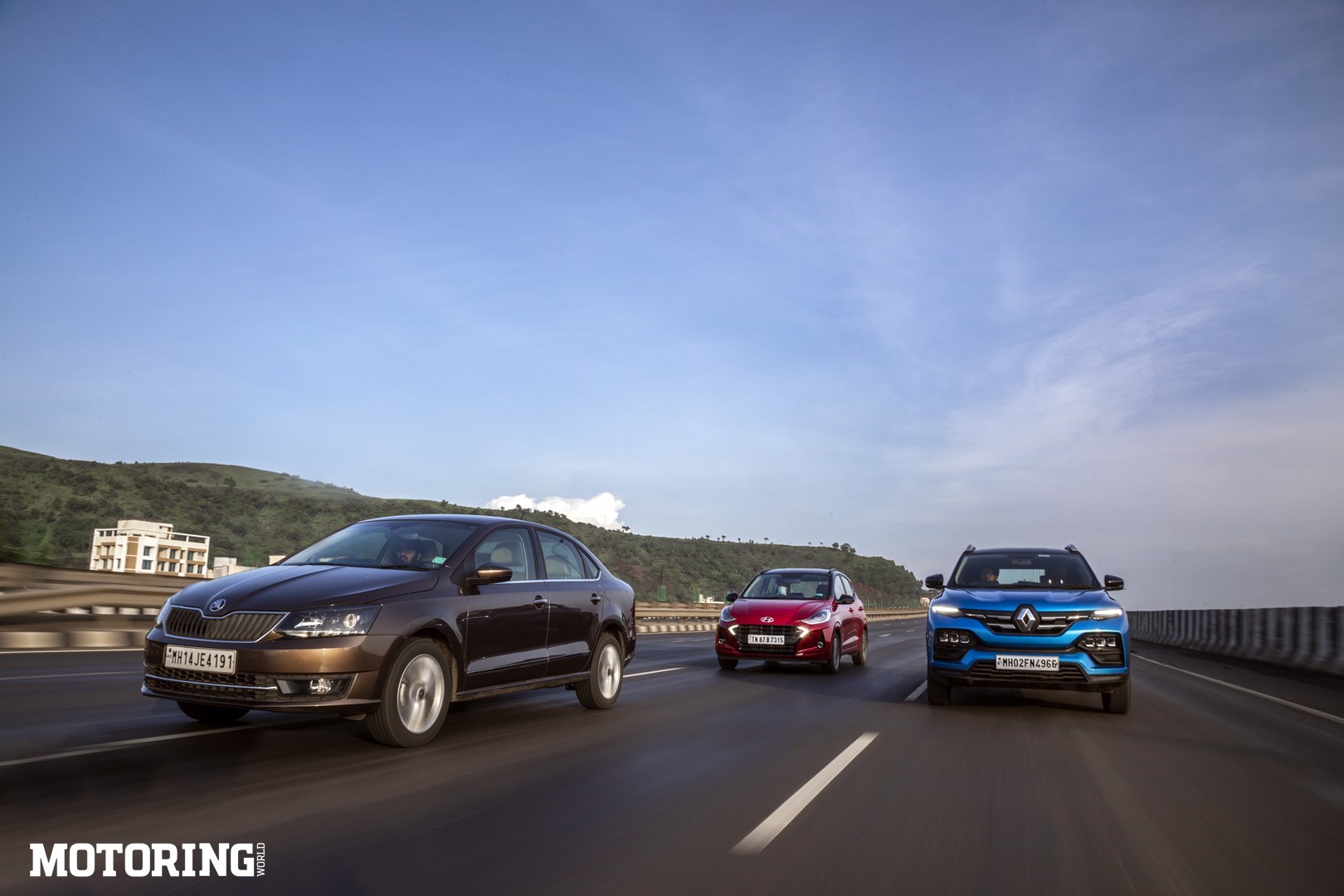 I love fast cars. Well, who doesn’t? From blistering acceleration to crossing over to the illegal side of the speedometer to take that corner at twice the speed of any other day. It is very difficult to not stomp that right foot down to see how much speed you can clock every time you see an open patch of road. It is crazy, addictive, and adrenaline pumping until it starts to become easy.

You see, modern-day cars are equipped with lots of driver aids that, after a point, make the entire process too easy once you have gotten used to them. It is present all the more as the cars get faster and more expensive. From split-second gear-shifting DSGs and ZF auto ’boxes to different driving modes and multiple traction-control settings to computer-controlled slide settings, there is a lot of involvement from the car’s brain to keep things sane. And it is necessary to have these guardian angels for cars of that calibre. Well, then how does one get around having fun with cars without all of that at stake? 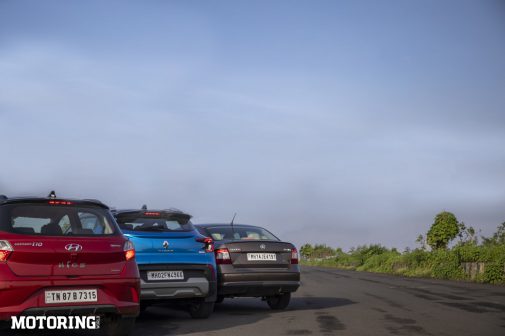 The answer to that lies with cars that don’t need a whole lot of power, equipment or money to deliver the driving pleasure we seek. We did have a lot of cars that qualified, but to keep matters realistic, we set a cap of Rs 10 lakh to the on-road price of the vehicle and limited it to one car from each body style. Hatchbacks have always been acclaimed for their zippy and compact dimensions, which is why we have the Hyundai Grand i10 Nios 1.0 Turbo GDi (quite a long name for a small car). Next is a sedan, known for its potent powertrains and handling characteristics, the Skoda Rapid TSI Rider Plus model. And lastly, since everyone wants to have a compact SUV in their garage, we’ve picked the Renault Kiger RXT 1.0 Turbo variant. It is not going to be easy, but I bet you’re waiting to find out.

FIRST ENCOUNTER
Is that a car from the future or what? I don’t think there’s any point in debating further on this aspect. The Kiger is hands down the best-looking of the trio. Yes, it’s the newest, but the design language that Renault has adopted with its recent models is very eye-catching. Not only does the Kiger look futuristic, but the design accents give it a premium feel. The contoured bonnet, slim grille flanked by the bright LED DRLs and the Bugatti Chiron-like (6 pods in the case of the Kiger) LED headlamp to give this compact SUV a unique appeal. The overall raised stance with the dual-tone colour scheme, sculpted rear end with pronounced tail-lamps ensures the futuristic look is carried from the nose to the tail. 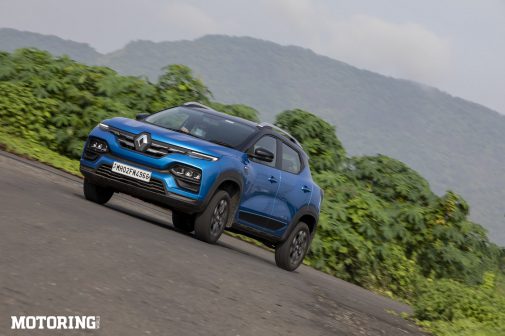 Next is the Grand i10. Traditionally, Hyundais aren’t known to look aggressive, but the little hatchback is more like an angry bird waiting to pounce on anyone who’d get in its way. I wasn’t that much of a fan of the Korean carmaker’s new design language, but if you spend little time observing the contours of the car, you’re bound to fall in love with it. And this red one, with the black roof, pillars and side mirrors, looks even nicer. The Grand i10 is probably the only car in its segment to offer projectors for the fog lamps and is also capable of pulling off that four-spoke alloy design with finesse. The Turbo badging on the front grille and tailgate is a small reminder that this hatchback loves speed. 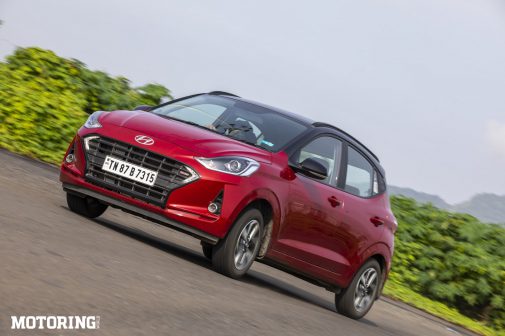 The Rapid is the blandest one here. Now that’s bound to happen when your country of origin is next to Ze Germans. But, it isn’t a bad looker. Not at all. It might look dull in this ‘Toffee Brown’ livery, but it has that mature, sophisticated, and ‘you don’t want to mess with me’ look. Also, dimensionally the Ripid’s proportions are well-defined with a strong shoulder line running across its length and the large fog lamps that alone are sufficient to light up the road ahead most of the time. 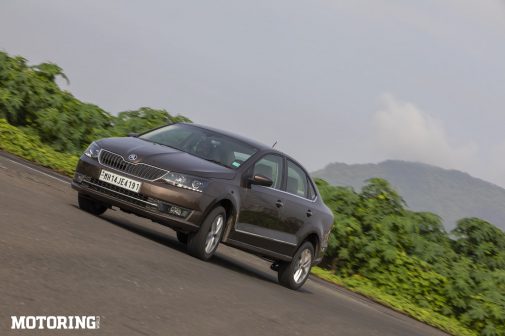 INSIDE JOB
How a car looks on the outside does matter a lot to me. That said, what also matters is the cabin. A good cockpit plays a crucial role in the driving experience. With the parameters set, it was a close fight between the Rapid and the Grand i10, with the latter winning the round. The Rapid has an excellent driver-focused cabin; it is spacious, the steering is good to hold, the gear lever is right where it needs to be, and the seat position can be set precisely to one’s requirement. Where it loses out is on the side bolstering for the seats, the small side mirrors with restricted vision, and the overall basic design which looks rather dated.

The Grand i10, like most Hyundais, is packed with features like keyless entry, keyless ignition, and a wireless smartphone charger, which are mostly limited to premium models. Also, it has sportier seats with side bolstering that keep you in your seat even when cornering hard. The steering is not typically Hyundai light, but just about right striking a seat balance for city and highway driving. And most of all, the buttons on the centre console are so ergonomically placed that  you barely need to take your eyes  off the road.

In the case of the Kiger, it was somewhat disappointing as the interiors didn’t turn out to be as expected. There is an overall plasticky feel to the cabin due to the materials used for the trim panels and switches. The design is no doubt fresh and is also ergonomically positioned for easy operation, but the overall experience lacked quality which could have been better. 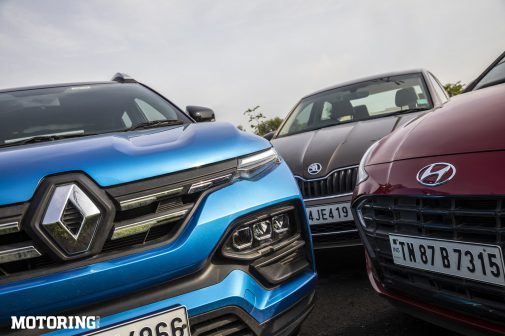 POWER HUNGRY?
All three cars here feature 1.0-litre three-cylinder turbocharged units under their hoods. With stringent emission norms and rising fuel prices, forced induction is the only way to keep this exciting, and we dig it. While all the respective engines produce power around the 100-bhp ballpark, it is the Skoda that registers the highest at 109 bhp and 17.84 kgm. It is also the most refined of the three and is rev-happy in nature despite being a three-cylinder unit. The power delivery in conjunction with the slick 6-speed manual gearbox is nice and smooth, till the point where the tacho crosses the 1600-rpm mark where the turbo spools up and races swiftly towards the redline. The Rapid feels clinical in the powertrain department as its motor and gearbox complement each other for a spirited experience.

The Grand i10 is up next on the list and although it produces the same power as the Kiger at 99 bhp, it delivers the same 1000 rpm earlier. It is torquier than the Renault at 17.53 kgm compared to 16.31 kgm for the latter. The feisty nature of the Grand i10’s turbocharged unit with its lower weight further compliments faster acceleration, which I’ll talk about soon. Unlike the Rapid which gets a 6-speed transmission, the Grand i10 and Kiger receive a 5-speeder which doesn’t feel maxed out even at triple-digit speeds. 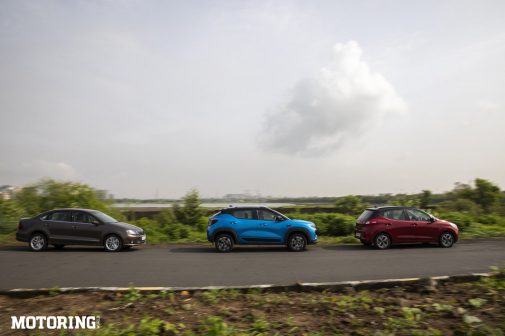 The Kiger does have a couple of unique features here which include three driving modes which work. There’s the Eco mode for more fuel-efficient driving, Normal mode for everyday driving, and the Sport mode wherein the throttle response is quicker and the steering is also more alert to inputs. This does give Kiger a level up on the Grand i10 thus claiming the second spot in this department, and making the Rapid the winner of this round.

DYNAMIC THREE
Now we all know well, without a well-balanced chassis and suspension setup extracting the full potential of a good powertrain becomes difficult or rather requires more effort. After driving all the three cars back to back around corners, chicanes, and performing acceleration runs, the one that returned the most engaging drive was again the Grand i10 followed by the Rapid and then the Kiger. Complemented by the small dimensions and lowest weight  (983 kg) among the three, the  Grand i10 was able to zip through corners while sticking to its line as  if someone had applied glue to  its tyres.

Meanwhile, the Rapid was also able to attack corners at an equal rate of speed and a little more due to its stiffer suspension setup, but exits needed steering correction to prevent it from understeering. It can also be attributed to the Rapid’s weight, 1112 kg, which comes into play when changing direction. For the Kiger, its taller and bigger design meant a higher centre of gravity that affected handling dynamics. Weighing in at 1012 kg, coupled with the more plush suspension setup, it didn’t feel the most confident while attacking corners, although the larger wheel size did manage to return stability at higher speeds and pliant ride quality even over rough roads.

In the acceleration runs, the Grand i10 managed to accelerate from 0-60 kph in 5.8 seconds followed by the Rapid in 6.1 seconds and the Kiger very close at 6.4 seconds. And as for the 0-100 kph runs, the hatchback achieved the mark in 10.2 seconds followed by the Sedan in 11.5 seconds and the Kiger clocking in at 12.8 seconds. Nothing beats less weight, as you can see. 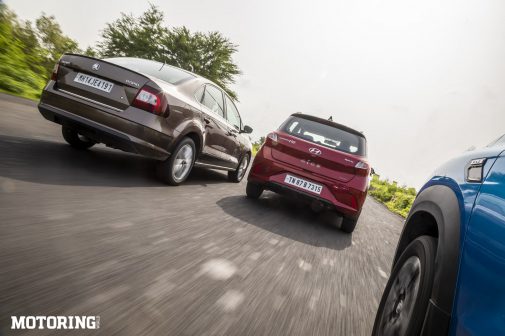 LAST MAN STANDING
Well, I can’t say that I didn’t see it coming, and no prizes for guessing, either. The Hyundai Grand i10 Nios, also being the most affordable here at Rs 9.20 lakh (on-road) takes the title of Most Fun Car Under Rs 10 Lakh, although not exactly by a mile. The Skoda Rapid TSI Rider Plus, also the second-most affordable here at Rs 9.50 lakh (on-road) is on the Grand i10’s heels on most counts. The Kiger might not be the winner here, but is one of the most exciting and fun-to-drive compact SUVs to have for its on-road sticker price of Rs 9.52 lakh.

In hindsight, all three cars offer something that stands higher in comparison to the other cars out there, and that is driving engagement. And one doesn’t need to shell out a whole lot of money to enjoy it. The more powerful cars get, the smaller is the window of opportunity to correct things. With cars like these, you are left with lesser things to worry about, easily manageable power, and most of all, a grateful wallet. Makes for a sweet deal, doesn’t it?