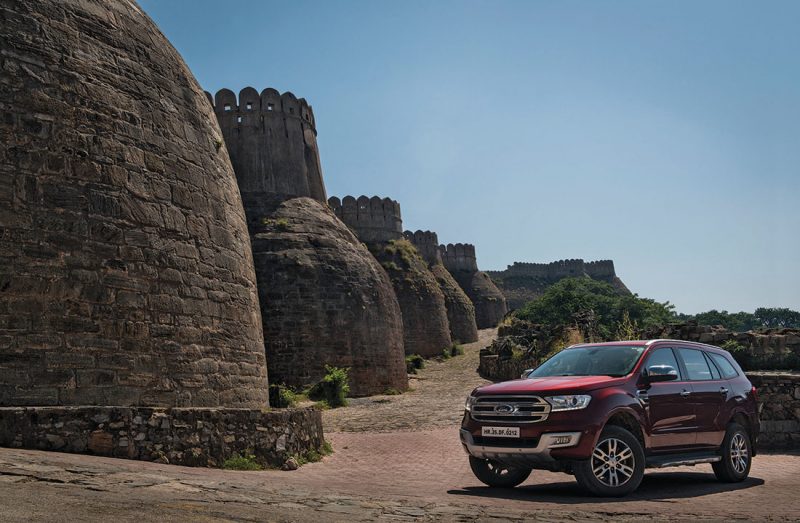 At eight o’clock in the evening, it was impossible to believe Kumbhalgarh was home to human life at all. There certainly weren’t any selfie stick-equipped tourists capturing moments of future inconsequence and, worryingly, there weren’t any locals, too. We, in the Ford Endeavour, were snaking up a small, broken road in the pitch-darkness of the Aravallis and the lack of any sign of life made the atmosphere in its mood-lit cabin tense. Was there another Kumbhalgarh we were supposed to have driven to?

Amidst the stars and through the dense cover of trees, we could see the Kumbhalgarh fort glowing a nearly crimson hue. It looked as if it were a part of the sky and the sight of it made us stop in our tracks. ‘Alright, the fort’s here but where’s everyone?!’ Then, the fort was no longer visible, too. The lights had disappeared. Clueless about what was going on, we navigated ourselves to our hotel, hoping to investigate. This had better be it – we hadn’t driven 834 km only to be told we’d messed up.

We hadn’t, thankfully. So, what about the mysterious disappearance of the fort? Oh, well, the fort gets lit only for a short while each evening, as part of a light and sound show for tourists, and the lights had been turned off at the exact moment in which we were looking at it. No extra-terrestrial or supernatural activity to be worried about, then. Over dinner, we learned that Kumbhalgarh is, indeed, sparsely populated and that it has more hotels than it does houses, a clear giveaway of its dependence on tourism. We also learned that there were eighty-nine leopards, apart from all kinds of other wildlife, and that we were, by default, not just in Kumbhalgarh but also in the heart of the Kumbhalgarh Wildlife Sanctuary which spans 578 square kilometres. For tourists, we were unusually quick with our outdoor dinner that night. 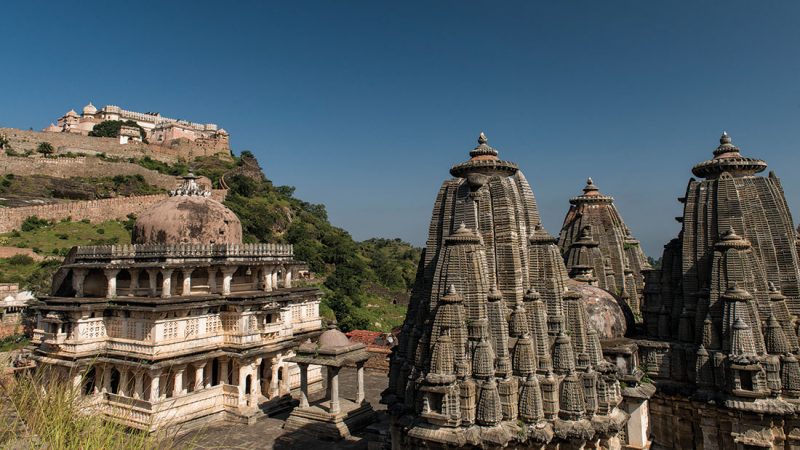 It was only in the next morning that we realised the scale of where we’d landed up. Our room offered a 360 degree view of the Aravalli mountain range and we were all but a speck in the midst of the dense forest. The Sunset Red Endeavour glistened in the morning sunlight and stood out in the expanse of green-on-beige that Kumbhalgarh is. The fort was a short drive away and the Endeavour’s automatic gearbox-equipped 3.2-litre engine felt relaxed while flattening everything the uneven topography had to offer. The power-assisted steering had been particularly helpful in navigating through the narrow road (the lack of it, that is) and with its generous seats keeping us in comfort while offering a commanding view, we were upbeat about the day ahead. 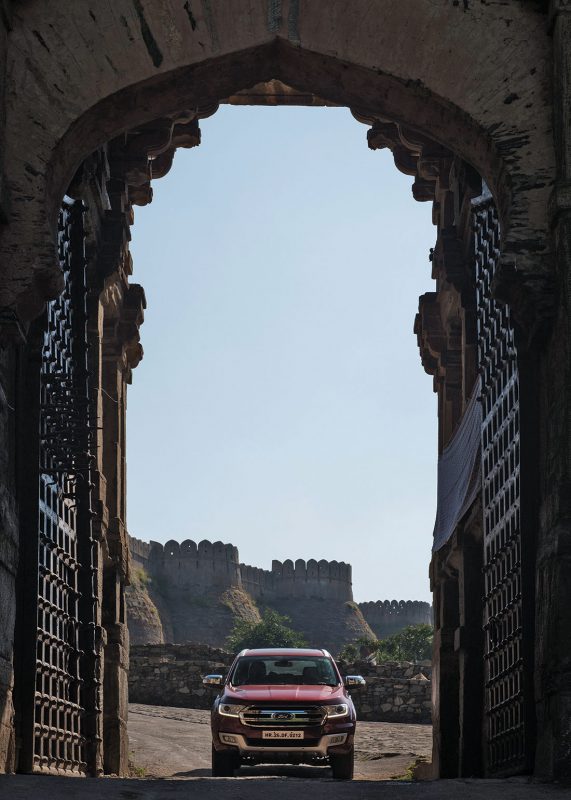 The fort grew larger in the Endeavour’s ample windscreen, as we approached it and it was bigger than we’d thought. Its history, along with its ribbon-esque architecture, the result of a few decades worth of meticulous labour, has enrolled it into the prestigious list of UNESCO World Heritage Sites and it’s entirely unsurprising. We drove into the first of its many gates, the structure’s arches dwarfing even something as humongous as the Endeavour. It was finally time to step out of its pampering, opulent cabin and rough it out. This fort, built to its current form in the 15th century by Rana Kumbha, is the most elaborate of eight-four forts under his dominion and is also the birthplace of the glorious Mewar king and warrior, Maharana Pratap. ‘The fort narrates its own history’, a staffer at the restaurant had told us the night before. It was true. The flow of the fort’s architecture said it all. It was about ambition, a show of strength and a sense of deep belonging to the soil of the Mewar kingdom. That the fort was brimming with tourists wasn’t surprising and neither was their absence from the bleak signs of civilisation we’d tread over the night before. The fort overshadows everything.

We were lucky to be ushered into the fort’s premises with the Endeavour thanks to a local we had befriended over breakfast and, as it turned out, he lived in a small settlement considered as the real Kumbhalgarh (rather than the hamlets around it, mostly hotel-infested villages), within the fort’s 38 km-long expanse. The Endeavour looked dignified and regal in the fort’s rustic environs and to liken it to the gigantic structure we were enveloped by wouldn’t be stretching things too far at all. Through our long and arduous journey, an interesting mix of four-lane highways and wild rally stages (well, sort of), the Endeavour had maintained composure, much like Kumbhalgarh’s walls, and it was every bit as comforting and plush as the aptly named Badal Mahal (palace of the clouds, translated) must have been in its glory days. 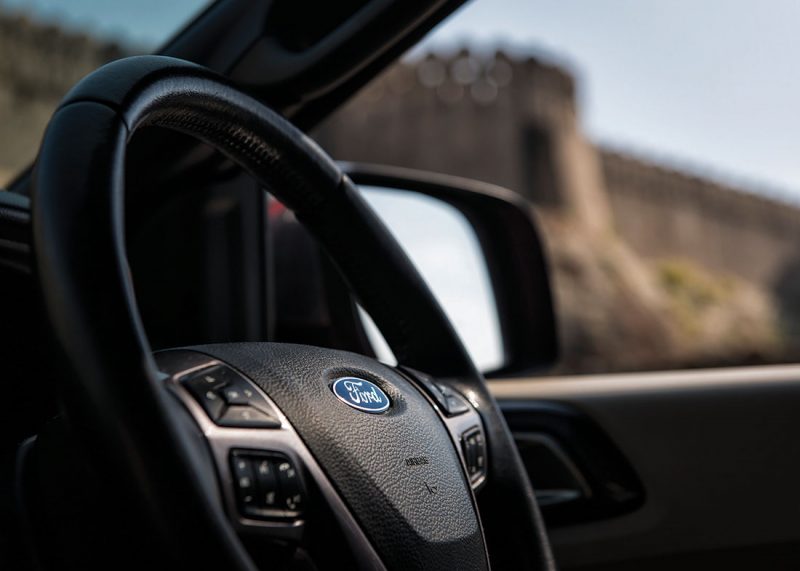 We trekked up a few of the many temples, each offering a unique yet uniformly spectacular view of the fort and the wilderness around it. Camera-wielding tourists were everywhere now but they had no impact on the solidarity and tranquility of where we were. The fort’s notable specifications include a 38 km-long wall, making it the second-largest of its kind anywhere in the world (the first being the Great Wall of China, of course), but the glaring sun ensured nobody really ventured to inspect the accuracy of it. We stayed closer to the palace grounds, too, our collective lack of physical fitness being the major deterrent. Needless to say, we were tempted to ask if we could, perhaps, drive the Endeavour over it (the wall is ‘four-horses wide’, as everyone there will tell you) but retreated in the interests of sensitivity. The locals had been warm and hospitable and, by the look of it, we wouldn’t be able to outrun them to the Endeavour. Staying quiet was the better option.

Kumbhalgarh is surreal in how peaceful it is and, within its mostly cool confines, we enjoyed our moments of quiet. The silence takes a while getting used to it, especially if you a pure urban-bred, but to imagine what it must have been like as the epicentre of Mewar activity is really what makes it extraordinary. To think the heroic Maharana Pratap walked the very paved pathway we were crawling up hits you like a, well, 38 km-long wall. It’s a sensory shock when you look at Kumbhalgarh for everything it represents and not simply for what it is today. There’s a dimension of vision and grandeur to it that’s impossible to fathom and yet effortlessly implied when you’re there. It’s something you have to experience to fully understand. 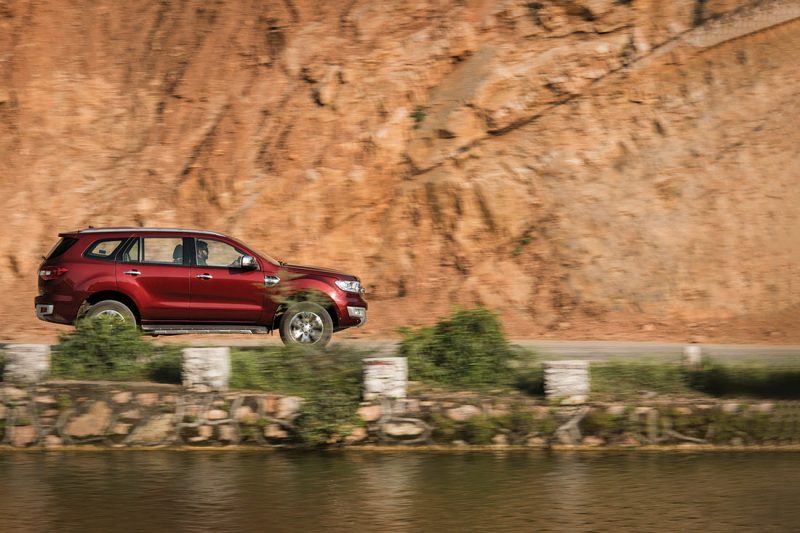 Back in the Endeavour, our thoughts coalesced around the path some had taken to create the truly extraordinary. It takes a unique bent of mind to fill a blank canvas with the colour of extravagance and awe and the correlation between Kumbhalgarh and the Endeavour, we realised, wasn’t far-fetched at all. Sufficiently pleased with the experience, we departed, the Endeavour’s chunky tyres kicking up a handsome trail of dust clouds. The phenomenal infotainment unit, co-incidentally, happened to be playing Pink Floyd’s Time at that moment, aptly in contrast to the timelessness of where we were and that of extraordinary journeys like the one ours had been. We had, indeed, driven to the right Kumbhalgarh after all; there just can’t be another one like it.