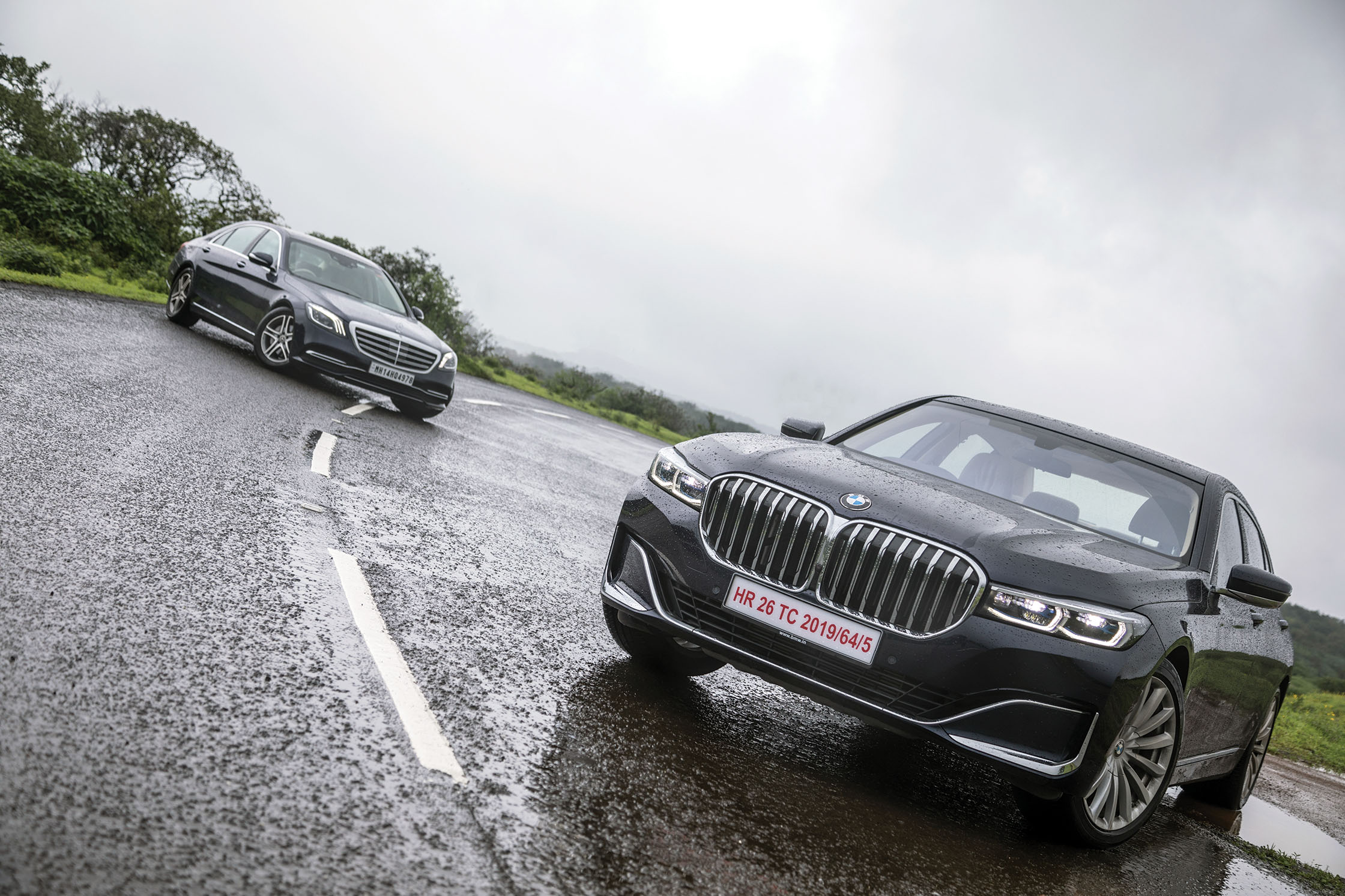 I really thought I had it all worked out. That’s the thing with complacency and biases, isn’t it? The ability to draw a conclusion with only experience as a factor is such a pointless exercise. It’s downright lazy, in fact. It took the might of two German car manufacturers operating at a very high level to make me understand that I didn’t, in fact, have it all worked out. 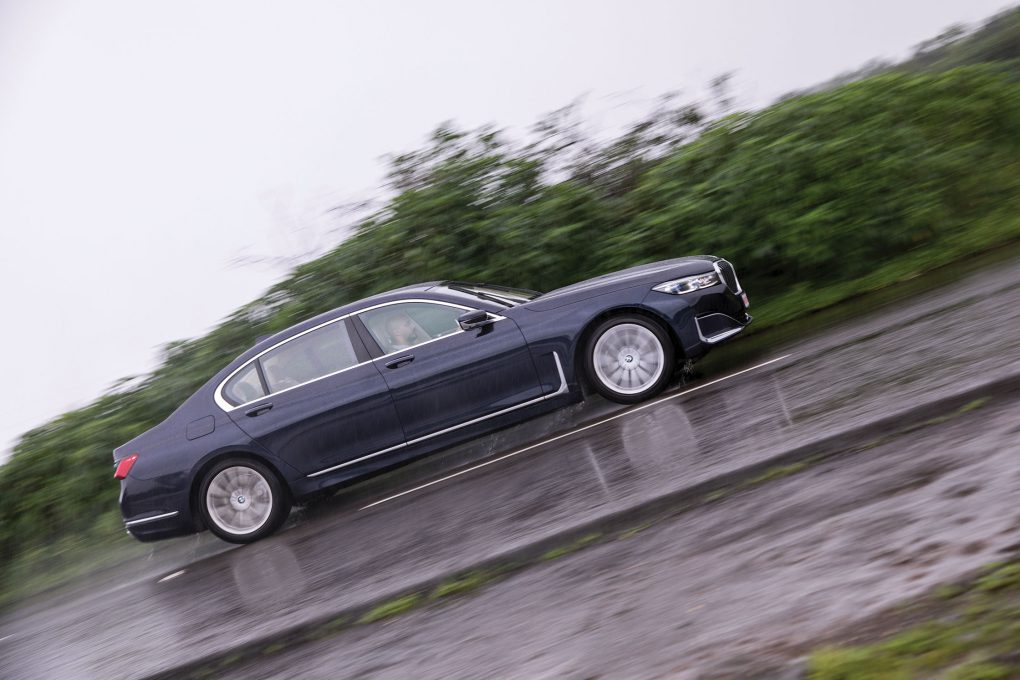 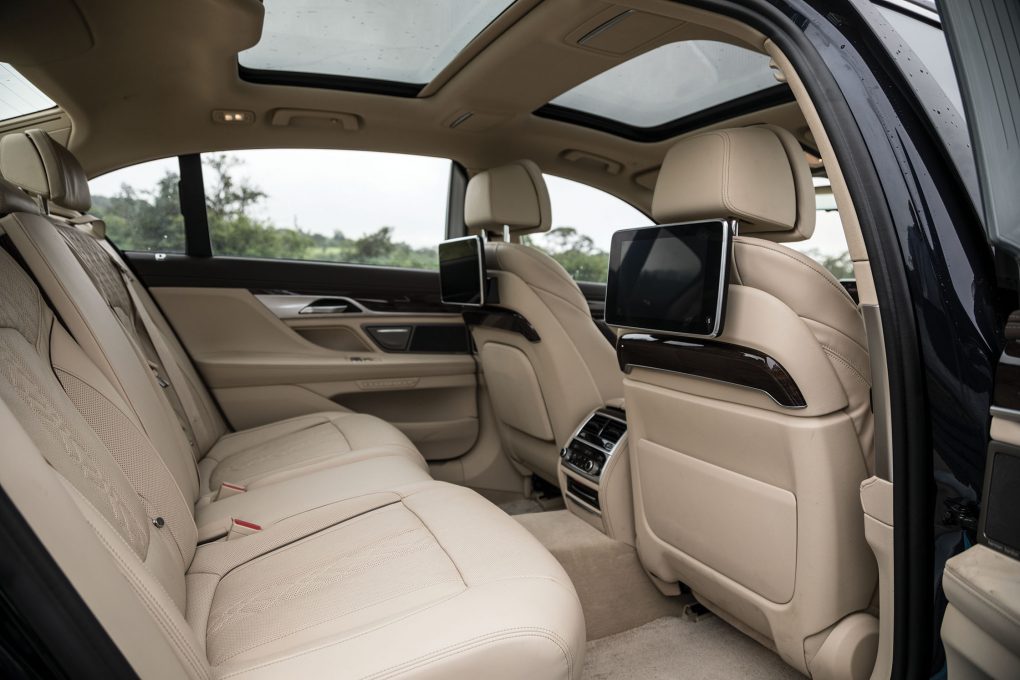 Let me back up, though. In the blue corner is the BMW 7 Series. In the other blue corner is the car that people buy when they’re sitting on a pile of cash, and are too worn out to be picky. The S-Class’ reputation as the best car in the world precedes itself. If you are even slightly clued in to the car world, you’ve undoubtedly heard that about the Benz. I don’t necessarily agree with it, because, well, best according to whom? And what? The chap who lives a floor down smokes a pack of Goldflakes each day, and insists on reminding me each time I walk past that they’re the best in the world. As far as stimulants go, he’s clearly never tried huffing down a case of Toblerones in one sitting… 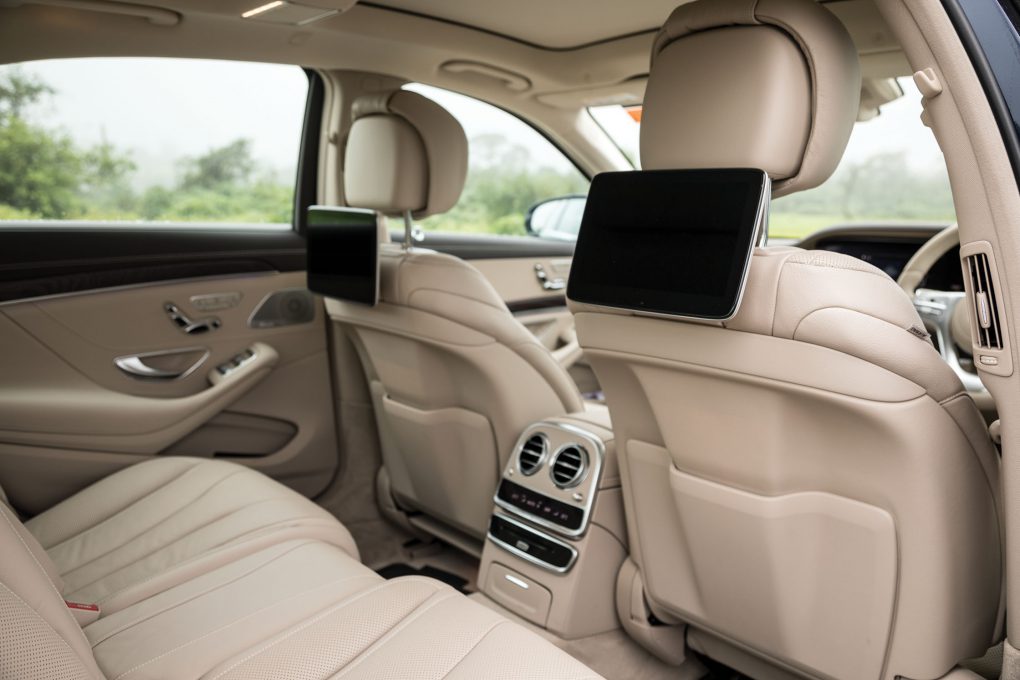 Just like the looks, then, ‘the best car’, I believe, is subjective. Still, it won’t stop me from writing my opinion down, no. I do quite like the way the S goes about its business. Everything’s very regal. Nothing over the top; nothing underrated, either. It’s a smorgasbord of curves and lines that come together very well, thank you. I suppose the strength of the S’s appearance comes by the fact that it’s so recognisable and easy on the eyes. It screams subtly a trait that it’s now come to be synonymous with: quality. There’s hardly anything displeasing on the inside, either. Everything feels fresh and ruddy up to date. There’s two beautifully large screens that serve as houses for your infotainment and drive-related instruments. The person who complains about the cabin is also the person who thinks his pool filled with currency isn’t deep enough. Obviously, being an S-Class, it would be stupid to not mention how comfortable the seats are. So, yes, the seats are borderline sleep-inducing. Far too much space, far too much comfort, and far too much opulence for me to handle. Then again, I’m not who Mercedes is targeting. 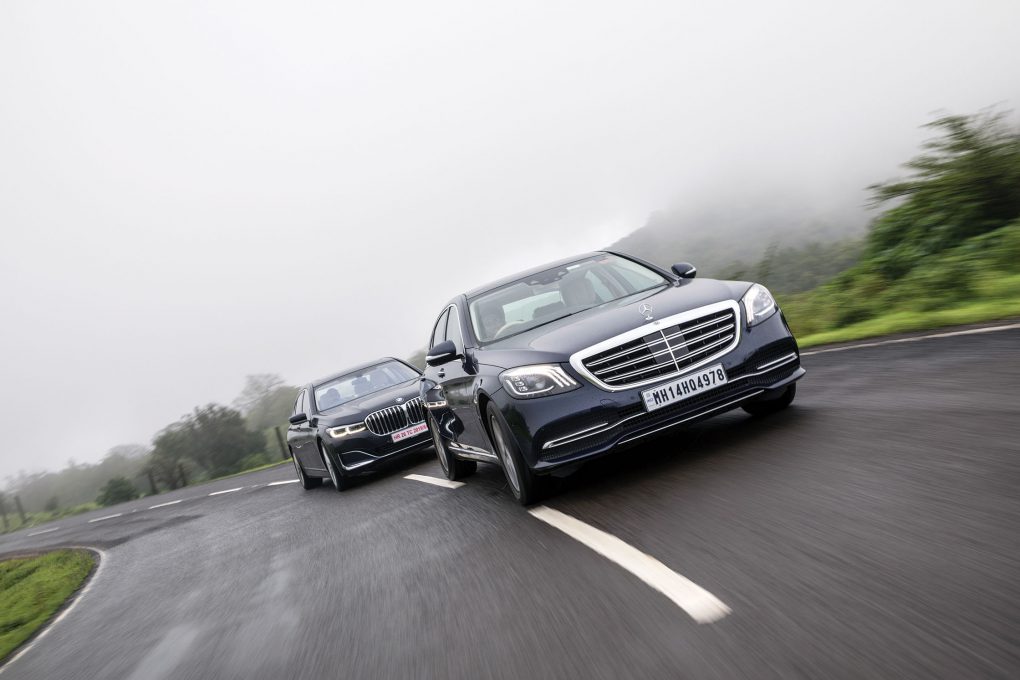 As for the new 7, the overwhelming sense I get is that it’s got a lot more peaks and troughs in comparison. Take the way it looks, as an instance. Everything’s just so sleek and sharp, and of the two, I’d much rather be seen in the 7, solely because it looks a lot fresher than the S. But then there’s that grille, which is about big enough to put a bed on. Frankly, it’s not an eyesore, but it does feel like an odd little inclusion in an otherwise fantastic looking car. Shame, really. As the day wore on and I spent a little more time with the 7, though, I got used to the size of the grille. Like I said, it’s not an eyesore, but its size nevertheless remains a sticking point at the back of your head, however insignificant it might seem. On the inside, it’s supremely opulent. I thought BMW would include that lewd gearlever from the new X5 that blinds you during the day, but thankfully it’s a regular lever. The rest of it is all very plush and modern and minimalistic; just what I’ve come to expect from BMWs, thank goodness for that. Although, one thing that did get on my nerves was the ruddy speed warning that all the manufacturers are mandated to fit on all new cars. Once you cross 80 kph, it’s a single loud beep, and past 120 kph, it’s incessant beeping. Now, I have two gripes here. One’s that the beep is way too loud. I get it. Slow down. But there’s no need to render me deaf in the process. It’s even synched to the volume of your music, so the louder your music is, the louder the warning beep gets. Secondly, the beep at 80 kph is the same as the beep at 120 kph is the same as the beep for any other critical warning in the car. See the problem? On multiple occasions, I struggled to figure out what the issue was with the car because it kept beeping randomly, even when I was under 80 kph. If there’s a tyre slowly deflating, or if I’m losing vital fluids from the car in any way, I wish it were a different kind of beep that would alert me. 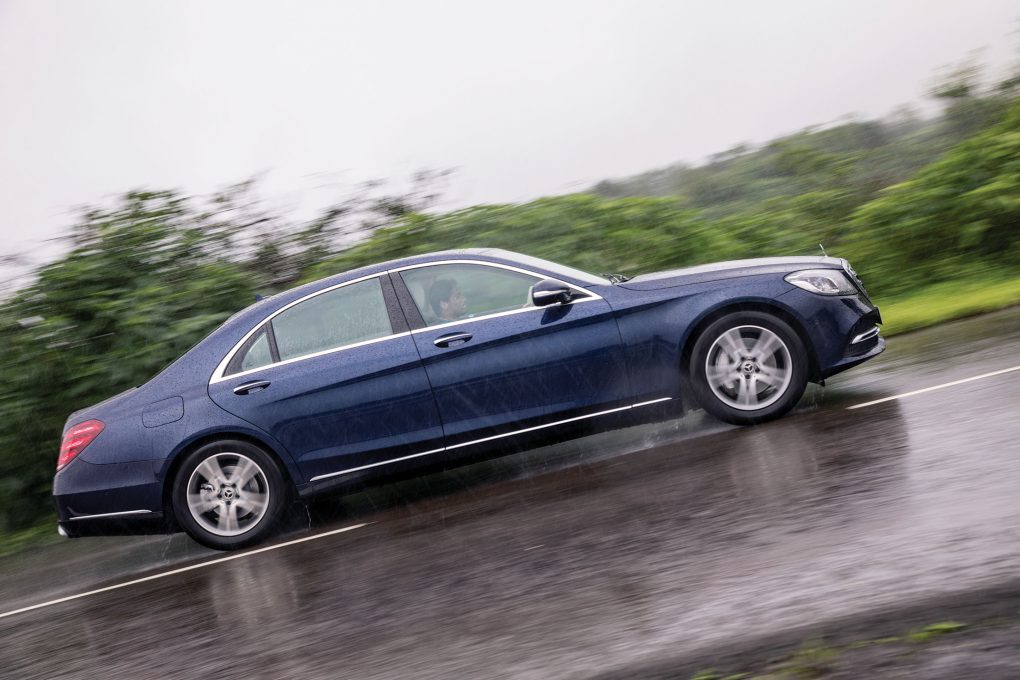 Anyway, enough of that. We’ve got two very good cars, and two really sweet engines powering them. The S, in this trim, has a 3.0-litre six-cylinder diesel powering it, and I honestly love it to bits. In case you hadn’t noticed, the S is a large car, and it takes a fair bit to get it moving. In that sense, you’d think 2925cc wouldn’t cut it, but you’d be stupidly wrong. Now, I know that both these cars, especially in India, are ones that will primarily be enjoyed from the back seat, but that’s such a shame. It’s outrageously fun to drive, the S. There’s no spike in the power delivery, it barely ever seems to run out of steam despite having a modest redline, and it’s all just so unlike what you’d expect from a car that’s as big and weighs as much. What’s even more tremendous is the way this thing hustles around corners. Of course, the ride is extraordinary so you barely feel a thing when going over bumps. But that’s to be expected with an S. What’s not is just how well this thing handles. It’s surefooted, body roll is kept to a minimum (nearly non existent, in fact), and the steering does a righteous job of telling you just how talented you are, and then gives you extra leeway to feel better about yourself. Ruddy marvelous, this machine. 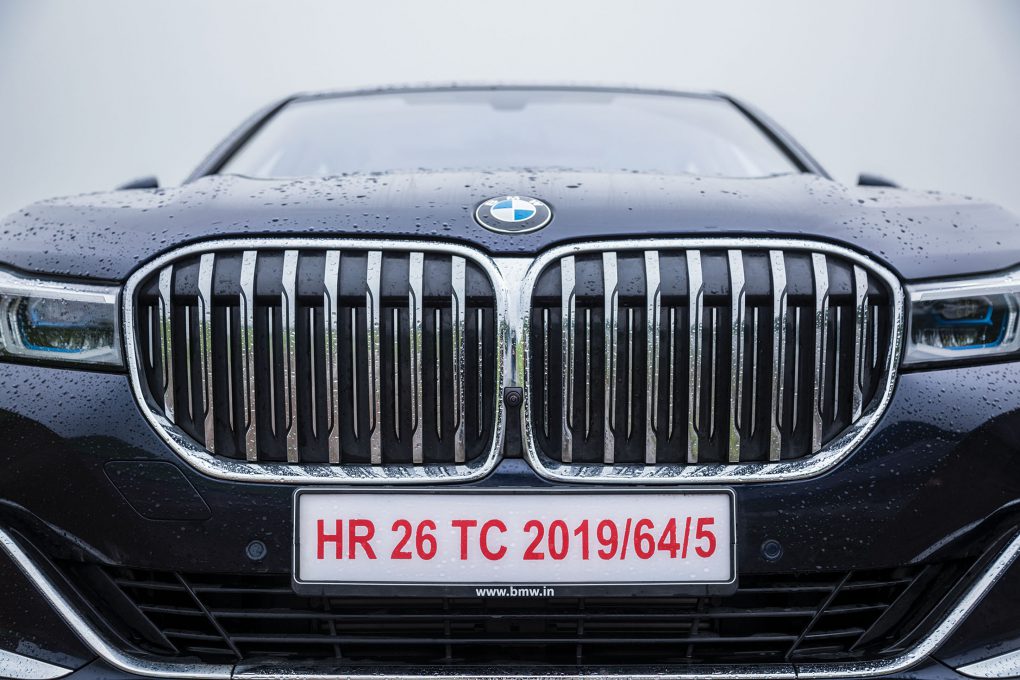 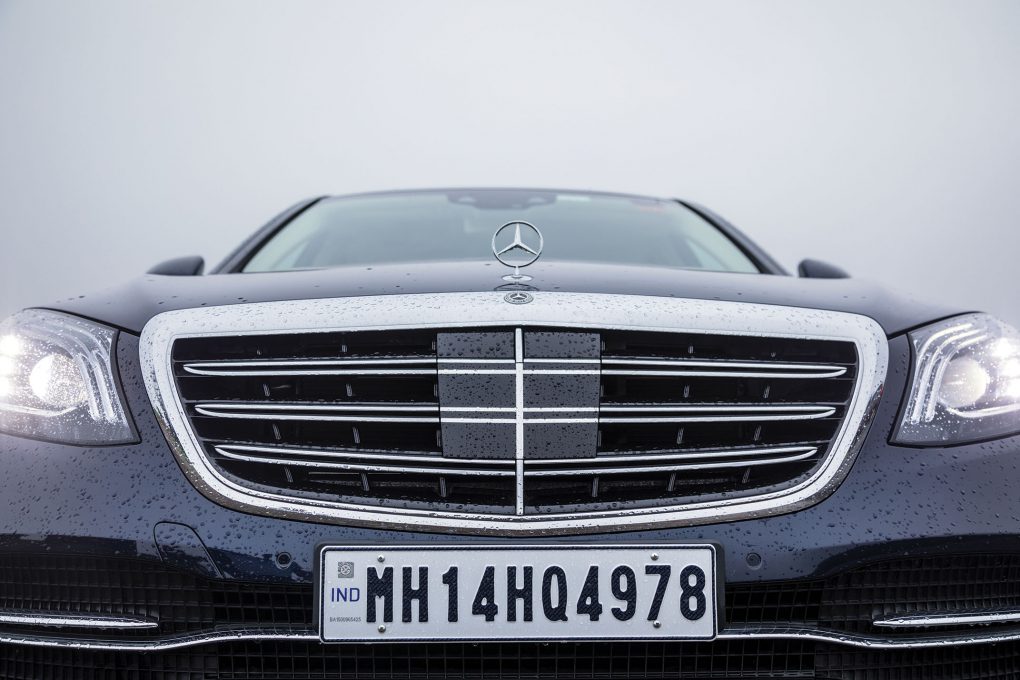 And then, there’s the 7. As a reference point, the S is perfect for the 7. The BMW’s 2993cc six-cylinder diesel is the same as the Merc’s, but the way in which the power is put down is slightly different. Where the S is relentless, the 7 feels a bit more relaxed. It’s no slouch, mind, but it just feels slightly less enthusiastic. The 7’s engine is a brilliant piece of engineering, no doubt, but if I had to choose, I’d very slightly lean toward the S’s 3.0-litre diesel. The 7 is also ever so slightly rougher over bumps, and noticeably more of a handful around corners. Do note that I’m being super picky here, and that these differences are marginal at best. But they do exist. 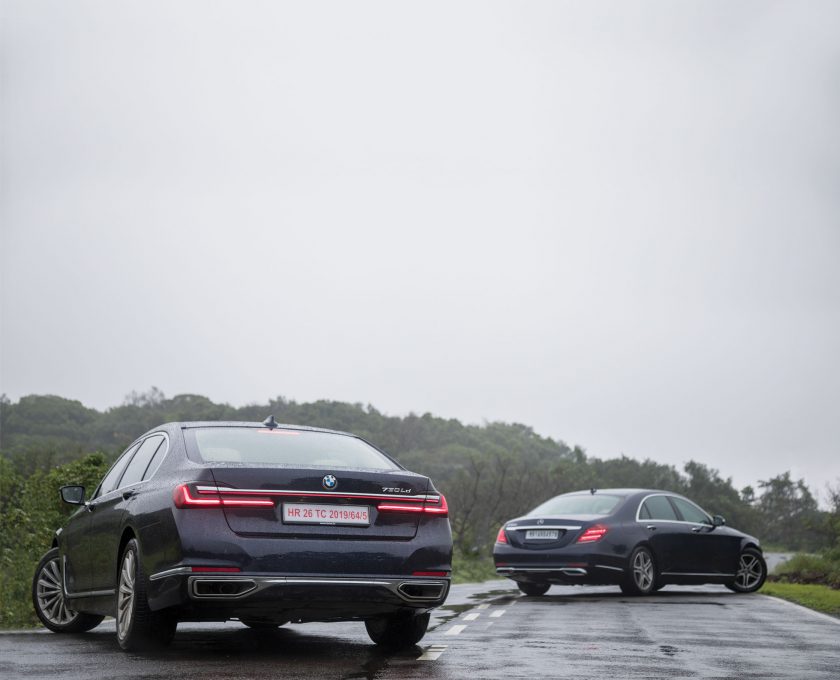 Were it down to me, I’d go with the S, but flash value dictates that since the 7 is the newer one of the two, it might just get the nod over the Merc. It’s a tough one, really. What I can say with certainty, though, is that you wouldn’t go wrong with either because they’re such beautifully thought-out vehicles, if they can even be called that anymore. Take your pick, then. Although if you have the cash, why not look into an S63 instead, or an M? Oh, wait. That’s a whole different can of worms. Best not to get into that for now…