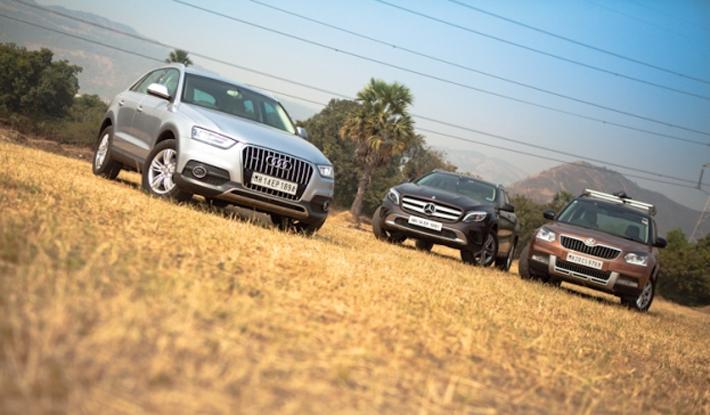 We’re a strange country. We want things that nobody else wants, things like cricket and senseless cinema. Sometimes, though, we end up on the same page as the rest of the world, as in the case of the small SUV — and why not, they’re practical because of their ground clearance and give us the feeling of more car for the money. Handling ability doesn’t count for much, either, when most of your driving is done during rush hour. In this space, the Audi Q3 has ruled supreme since its launch, a success that Mercedes hopes to emulate with the brand new GLA, and a success that we’re sure the Skoda Yeti envies. But does the Q3 manage to hang on?

If looks could kill…
The GLA would be the master assassin. Full of cuts and creases and with a stance that gives it the meanest look of the three, it is very now and aggressive. Among our favourite elements are the twin-slat grille, the creases on the doors that bend towards each other the further back they go, and the tail-lamp elements. The Audi looks more like a member of a school of ninjitsu — it is a clean design that is attractive but might not get you noticed alongside the GLA. That said, once you pay attention to it, you notice details like the almost fastback rear glass, and the realisation dawns that slightly boring it might be, but it will never age as much as the others. We only have issue with the new clear-lens tail-lamps that look like aftermarket units. The Yeti is like a character out of The Expendables. It isn’t pretty, but one look at it and you know it will get the job done. The B-pillar, the curvy wheel arches, and the upright rear don’t gel with the other design elements of the car. The outgoing car also looked very quirky, but its looks grew on us, so there is hope for this Yeti as well.

Beauty is only skin deep We doubt that either Mercedes or Audi have heard that, for when you step into either cabin you’re greeted with luxury that we were previously used to only in cars that are now pushing the ` 50 lakh mark. The Mercedes follows the design of the A- and B-Class, and there are a few features that stand head and shoulders above the other two like the air vents, which neither of the others comes close to. The centrally mounted display is still an anachronistic touch. In comparison, the Audi’s screen slides out from the dashboard when you need it. The Q3’s cabin also feels a little more premium because of touches like the wood and brushed aluminium accents, and the beige leather helps the illusion of more space in the Q3. Don’t be fooled by the less-than-premium badge on the Yeti, because it scores surprisingly high on the interior. It has everything these other two cars have, but without the flash. There are tasteful wood and aluminium accents, and a competent audio system that offers all the connectivity options possible — provided the Bluetooth module is installed and the converter cables are in the car. Quality is nearly at the level of the other two, and as far as practicality is concerned, it’s even better. That dowdy derriere also means great headroom and a big boot to stow away your belongings. Special mention has to be made of the aluminium-finished pedals, which are by far the sportiest and most desirable of the three. The Mercedes offers seven airbags to the others’ set of six, but you’ll be safe enough in any of the three considering they’ve all passed NCAP crash tests with flying colours.

Rev it up
The Audi and Skoda share the 1968cc engine block, but that’s where the similarities end. The Q3 generates 174 bhp and 38.8 kgm to the Yeti’s 138 bhp and 32.6 kgm. The Mercedes uses a higher-capacity 2143cc engine that makes 134 bhp and 30.6 kgm, the lowest figures of the three. Then again, it is also the only one with no all-wheel drive system, so you’d expect the less weight and lower transmission losses mean that it won’t necessarily be slower than the other two. However, the Q3 weighs in at 1660 kg, the Mercedes at 1585 kg and the Yeti at 1543 kg. Speaking of which, the Q3 gets Audi’s well-known quattro all-wheel drive system which feeds the rear wheels power when the fronts lose grip, and the Yeti follows a similar system. However, the Q3 runs its power through a 7-speed DSG automatic gearbox, while the Yeti has a 6-speed manual. The throws are pleasant and positive, but the clutch engagement is too sudden for our traffic conditions. We’d gladly pay the extra green for an automatic Yeti, given the present company. The Merc also runs through a 7-speed dual-clutch automatic, but it doesn’t feel as quick to shift as the DSG, although it matches up in daily driving.

The suspens(ion) isn’t killing me
All three cars run a similar suspension setup — McPherson struts with wishbones at the front and an independent multi-link rear. However, the way they ride and handle isn’t similar. First, the Mercedes. Cars from Stuttgart have become synonymous with ‘comfort’ here, and are even derided for it sometimes. However, the GLA’s ride matches its looks, with the hardest ride of the three. It is a surprise, but once you go around a corner it makes a lot of sense. There is a lot of grip and you can feel what’s happening through the steering wheel better. However, the Q3 has that great all-wheel drive system, so grip is never at a premium, although a little more steering feel wouldn’t go amiss. The Yeti, with its manual gearbox, lightest kerb weight and all-wheel drive system should have been the driver’s choice of the three — it certainly feels like the quickest — but the indifferent steering feel lets it down. None of these cars was made to offer true driving pleasure, but from what we have here, the Q3 manages to find the best compromise between cosseting its passengers and involving the driver.
Pages

Which is best? The Yeti doesn’t quite fit into the ‘premium German’ category. It is like the uncomfortable outdoorsman in the ill-fitting suit who is forced to come to the New Year’s Eve ball when he’d rather be out in the woods, camping. The light weight, manual gearbox and all-wheel drive make it one of the best cars to drive across the country in, but it doesn’t look and feel premium enough, despite the massive price difference. You could have a Yeti and a half for the price that the other two command, so if you’re a no-nonsense person, the Skoda is all you’ll ever need. If, however, you want something more, the Mercedes can give it to you. It’s got smashing looks, the respect that the three-pointed star commands, and the interior is new compared to the other two. However, the Audi offers all this and an all-wheel drive system for the same money, which also makes it good value. And that is what sways our opinion — it not only offers the pride of ownership of a premium German brand, but also the happiness of a good deal.