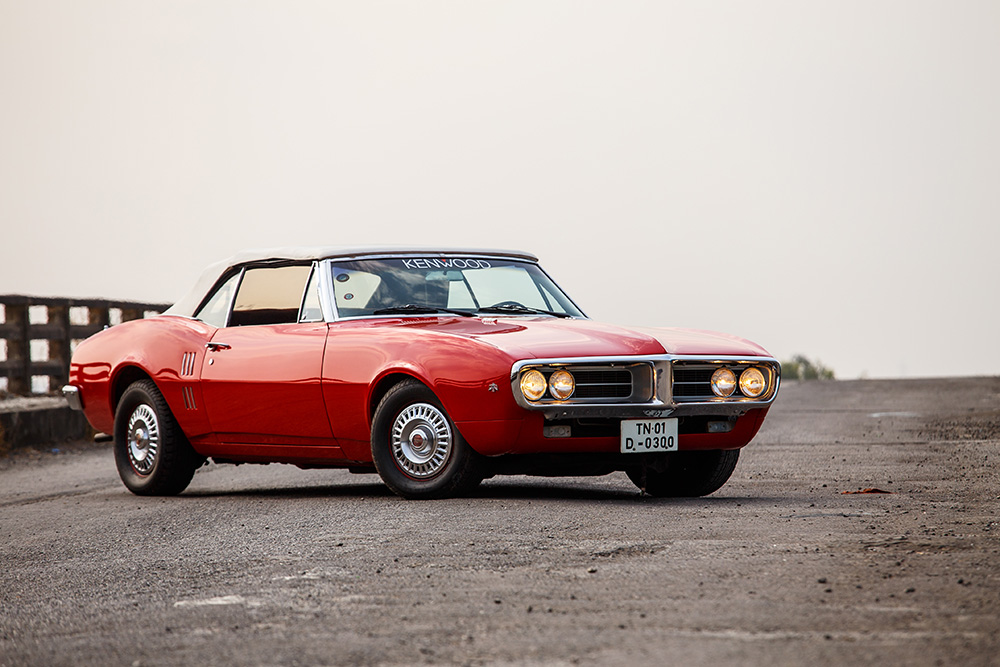 There are those breeds of sports cars that are one with the driver. Legendary Japanese masters behind heroic, world-beating cars have often quoted the concept of a horse and its rider to equate with such sports cars and their drivers – it’s a relationship that unfolds at each twist and turn of the road. These are engineered to be finely balanced machines that intuitively understand and instantly respond to the driver’s inputs. Objects of precision. Bywords for handling. Sensitive to inputs. Measured in feedback.

This is not one of them. 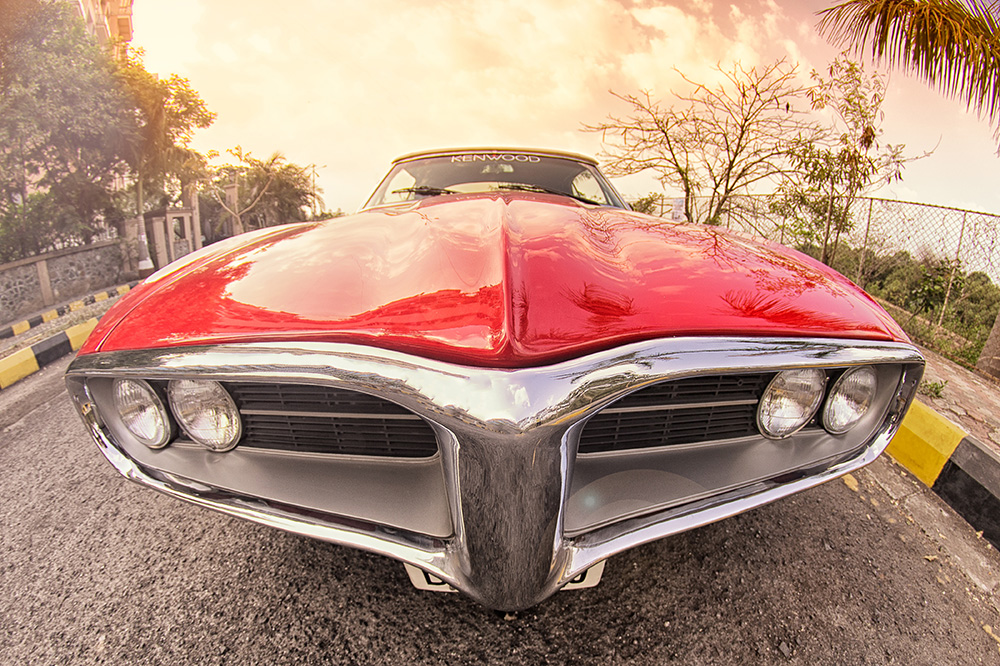 What do you expect from a car that comes from the Land of the Free, Home of the Brave and 31 Cents to the Gallon? And a land of such straight roads and highways that you might have to take special driver training to learn how to take corners. (As an aside, anyone here seen Cars, the first part, with Doc Hudson?). I am driving on a straight road but I am constantly making steering inputs just to keep it in its intended trajectory. With three lazy turns lock-to-lock and an easy fluidity to the steering wheel, it’s like a long distance Bell AT&T call-collect to the front wheels – yes, I do believe they are there somewhere beneath that long hood. It is not a small car; it’s a two-door convertible that’s almost as long as the current generation Toyota Camry, and tips the scales at 1700-plus kilos (being heavier than the “coop”). Obviously that bulk would need some serious pulling power if it has to qualify as a sports car. Naturally, for good ol’ Detroit iron, nothing less than a V8 would do. Since we’re takin’ it easy, a two-speed automatic takes over the shifting duties. All that’s missing is some extra cheese, large fries and a, er, Diet Coke. 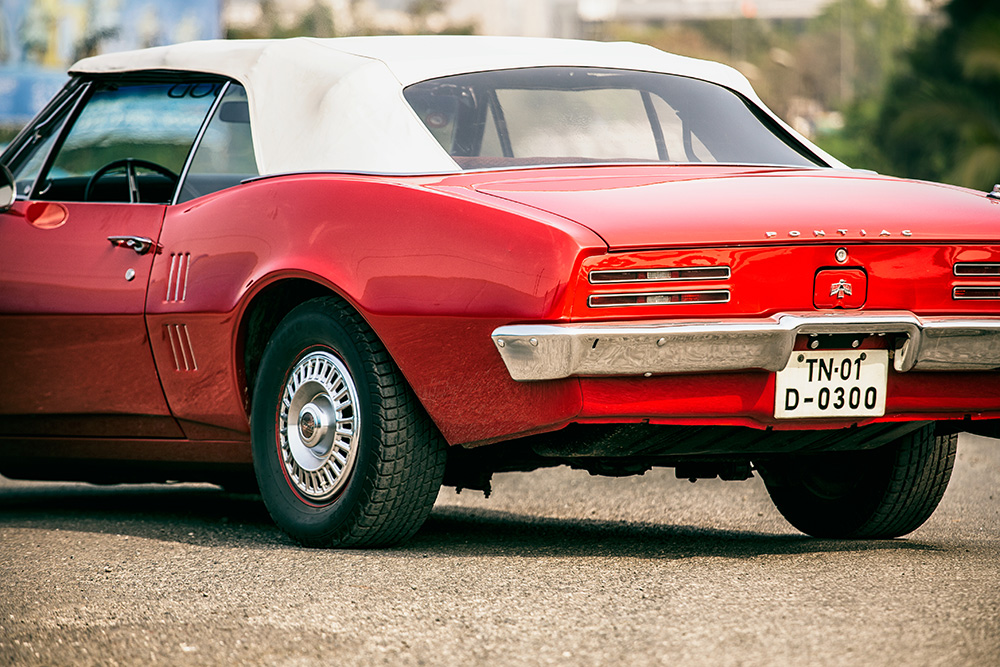 No, I am just being facetious. There is a time for sushi and there is a time for a big, fat burger with some sides to go with it. Both have their place on the table and both deserve to be enjoyed. For a classic in Summer of Speed, this time round we have gone Stateside. Say hello to the first-generation Pontiac Firebird, a historic model and by all means, an essential part of Detroit lore… In which the Camaro plays a super-important role.

Camaroderie
In the 1950s and 1960s, it was a wonderful time for the United States, exulting in its status as the most powerful and wealthiest country in the world. Demographics favoured it too, which meant no more ‘fuddy-daddy’ cars for the youth. Ford read the signs perfectly and introduced the Mustang in 1964. It was a monster success, because the market was ripe for a ‘personal sports car’ – a second car for the family, usually driven by Junior, to cruise on the Strip or head to Pop Tate’s. And of course, smoke the rear wheels and show who the boss at the traffic stop-light is. 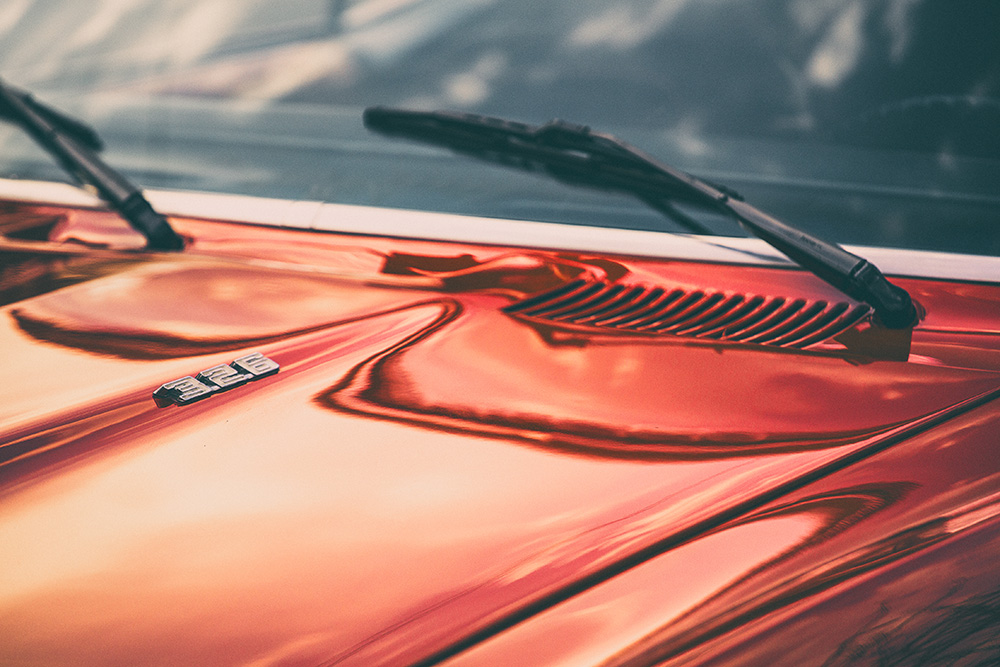 The rest of Detroit did not know what hit it. Ford had set the ‘pony car’ template and reaped rich dividends. These were “small” cars, characterised by long hoods, short rear deck, various engine variants ranging from six-cylinder commuters to fire-breathing V8s and a huge customising options list. General Motors scrambled to get a model out wearing the Chevrolet bowtie to take on the Mustang. The Camaro was based on the F-body – this was a new and unique front-engine, rear-wheel drive platform developed and built by GM’s Fisher Body Division. It mated a stamped unit-body with that of a full-frame chassis incorporating a front sub-frame carrying the engine and the front suspension. It would have taken The General even longer to get the Panther concept into the production Camaro, if not for something we take for granted these days – computers. Using computer simulation techniques, clay models to dies could be quickly done and thus development time was crunched. And finally, on September 29, 1966 – two years after the Mustang’s virtually undisturbed run – the Camaro was launched.

Ford, in the meantime, took the same underpinnings of the Mustang, gave it the more upscale Mercury treatment and launched the Cougar. While Chevy slugged it out with Ford, it was Pontiac’s turn to take on Mercury – and that car was this, the Firebird. 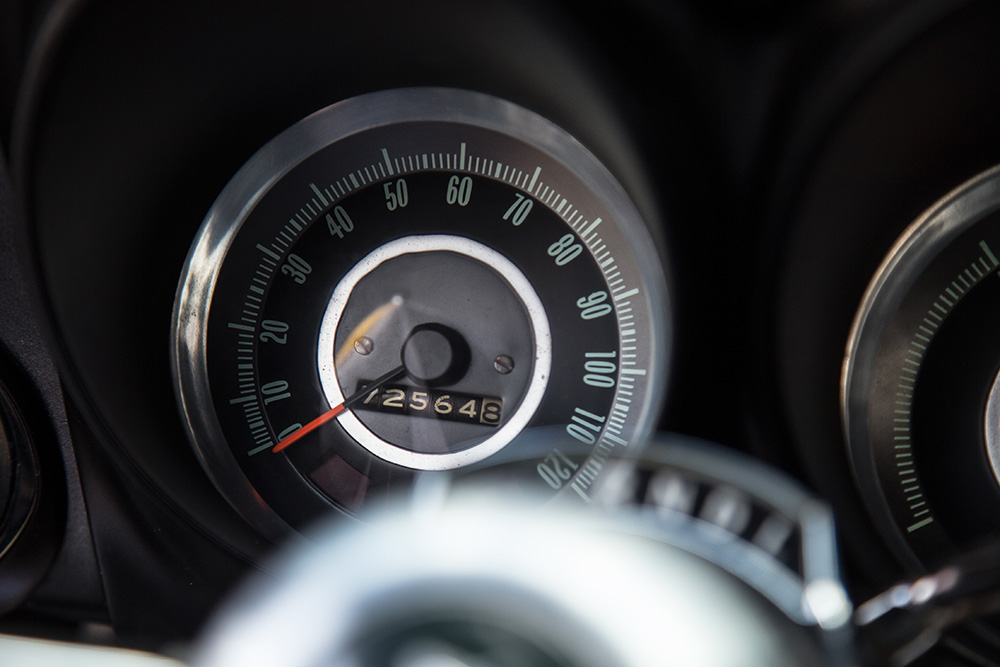 By all means, this platform sharing and badge engineering was successful then. Understandably, the Chevrolet division would not have liked giving away the F-body platform to Pontiac for free, but they still had to do it because the top bosses in GM took this decision. In just five months after the Camaro’s launch, Pontiac introduced the Firebird on February 23, 1967 – the 12th entrant in the hot pony car category. The rivalry between the various divisions at GM was even fiercer than with their competition, so how did Pontiac get a crack at the pony car market so easily? And how did they launch it so rapidly? Enter John Z. DeLorean.

Firefighter
Yes, that DeLorean. He was the general manager of the Pontiac division and it would have been easy for him to persuade the management to let him have a crack at the pony car market – after all, he was the hero behind the wildly popular GTO and was fast rising up the corporate ladder. With the Mustang, Ford had created what would eventually be a million-car segment and all car brands wanted a share of the pie. Besides, the GM top bosses owed him one, as they did not let DeLorean have the production version of a two-seat sportscar concept which would have competed with the Corvette. Once he got the okay for the Firebird, DeLorean ensured his entire division worked hard to get the car out into the dealerships at the earliest – this, while there was parallel work going on to introduce the upcoming 1968 models. Pontiac also had one of the smallest engineering departments in the US automotive industry. But they pulled it off.

Now DeLorean was also a car guy, a fact acknowledged by the leading auto magazines at that time. He had a keen interest in design as well as driving performance, which is what led to the Pontiac brand to its aggressive, performance oriented imagery. So what did he and his team do, to make a Firebird out of a Camaro?

They decided to make a little GTO out of it. The designers gave it the highly identifiable split front grille that thrust outwards in pure belligerence and a set of quad headlamps. The protuberance of the grille meant the car did not get a conventional bumper. The rear received trendy slat-like tail-lamps and somehow the Pontiac team managed to convince GM to allow them to at least stamp the rear fenders – which is why you see the six vertical “hash marks” that take the attention away from the Camaro’s highly iconic rear haunches. And yes, the bonnet was also Pontiac’s own nasty work of art. Engines were lifted off from the existing Pontiac line-up – the Tempest, the LeMans, and yes, the GTO – plus there were a host of other manual and automatic transmission options.

The car was supposed to be called Banshee, in honour of a fighter plane made famous in the Korean War. But someone had the presence of mind to check the dictionary, only to realise that it stood for a female spirit who forewarned death. Out went that name and in came the Firebird badge. It was not a new one – GM had been showcasing Firebird prototypes that foretold a future of jet planes for the road and turbine power for the daily commute. In fact, promotional pictures of the Firebird show the car next to the first Firebird concept.

Still, the Firebird name did not come out of nowhere. “…named after a legendary Indian symbol which promised action, power, beauty and youth,” a press release promised. And the ads went: “Pontiac announces not one, two, three or four, but five magnificent new Firebirds for every kind of driving.” Between the two configurations – hardtop coupe and convertible – Pontiac offered a regular Firebird with a 165-hp inline-six, the Firebird Sprint with a 215-hp version of the same inline-six, the middle Firebird 250-hp 326 V8, the Firebird 326 HO with the same V8 now producing 285-hp and the top-of-the-pack Firebird 400 with a 325-hp V8. A 250-hp convertible – one of the 15,528 produced out of a total of 82,560 – is what I am rollin’ in right now. Yeah. 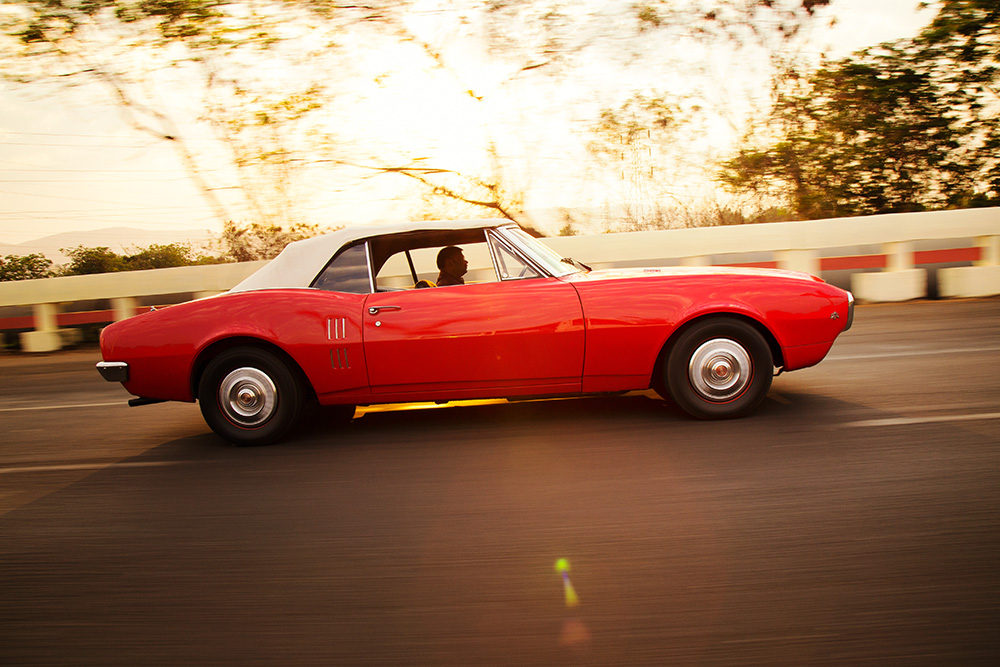 Ponyac
As mentioned earlier, this 326 cu.in. motor was the middle-of-the-range model – it comes in just at the point when things begin to look interesting in the Firebird line-up (the straight-six received some great reviews, by the way). As the ad copy went for this model: “Is there room for a family in a sports car? There is now. The Firebird 326 combines the excitement of a sports car with the practicality of a 326 cubic inch V-8 that delivers 250 hp on regular gas. (Yes, we said 250!) Standard transmission is an all-synchro three-speed, but you can order an automatic that does all the work for you, and options that include everything from air conditioning to stereo.”

Someone did just that and I am driving it. Displacing 5300cc and developing a turning force of 46 kgm, this V8’s 250 horses breathed via a double-barrel carburettor and had a single exhaust – the HO version had different compression ratios, four-barrel carbs and a twin-exhaust system. The V8 chugs and idles like one of those diesel locomotives you often see in Indian railway stations. To my surprise, there is no dominant lateral movement even when you rev the motor – perhaps it was because Pontiac had mounted these unique dampeners (essentially oil-filled containers with weights suspended in them) in the four corners of the car to reduce the vibrations and movements inherent in a convertible. 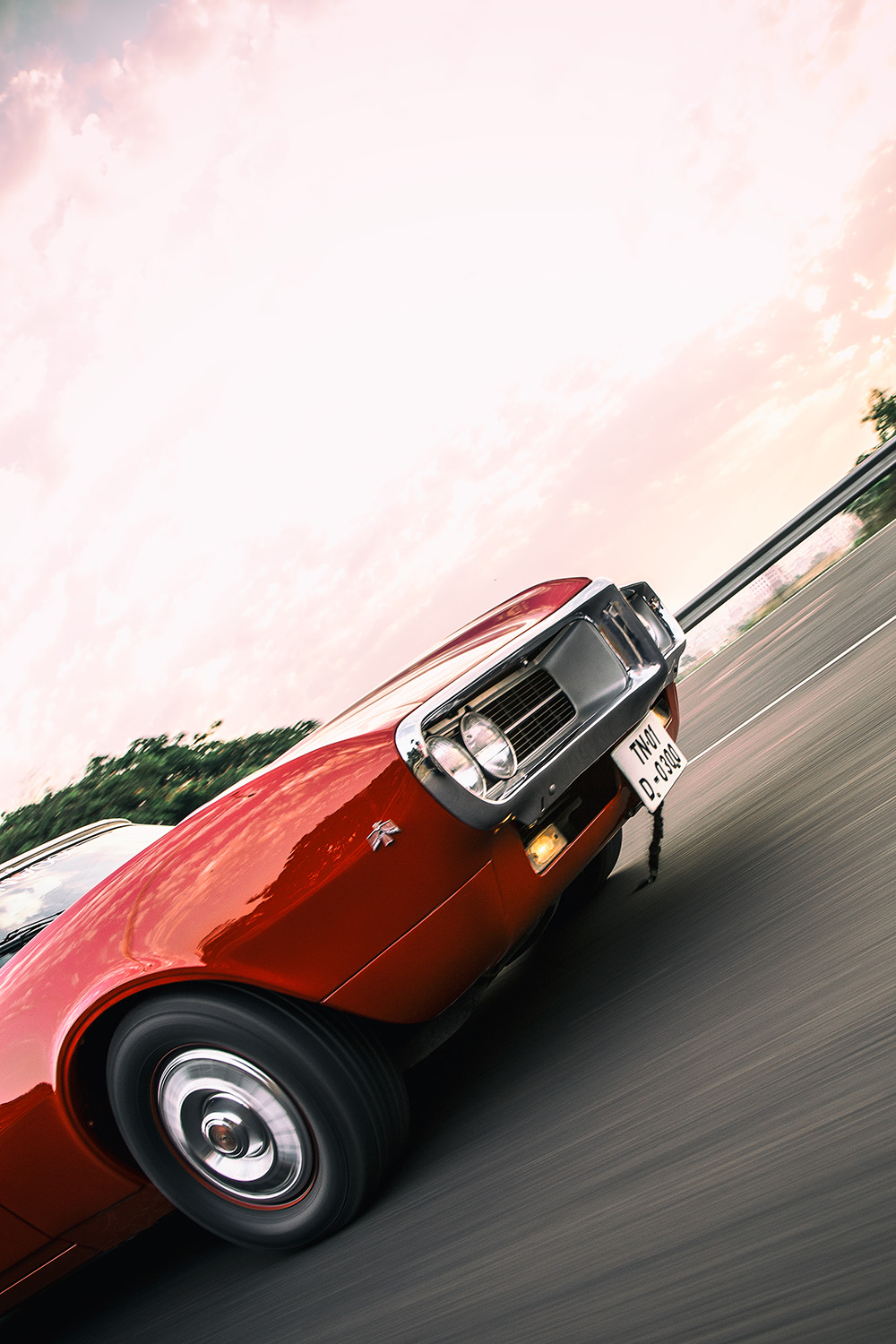 The irony is that since DeLorean was a car guy, the Pontiac was designed to handle better than the Camaro. And they also had the time to set it right. The independent front and rear single-leaf spring setup was tuned to make the Firebird offer a modicum of poise over the slightly wild Camaro. The ride is of course comfortable, but I was not so sure of its ‘better handling’ capabilities. Any tight corner I took with more-than-necessary speed was unsettling – not for the car, but for me. This one takes some time to get used to. And that over-servoed steering was not helping matters either. If I was driving over some gravelly surfaces, tail-outs would have been easy… Easy like Sunday mornings. Hey, it’s not my car. 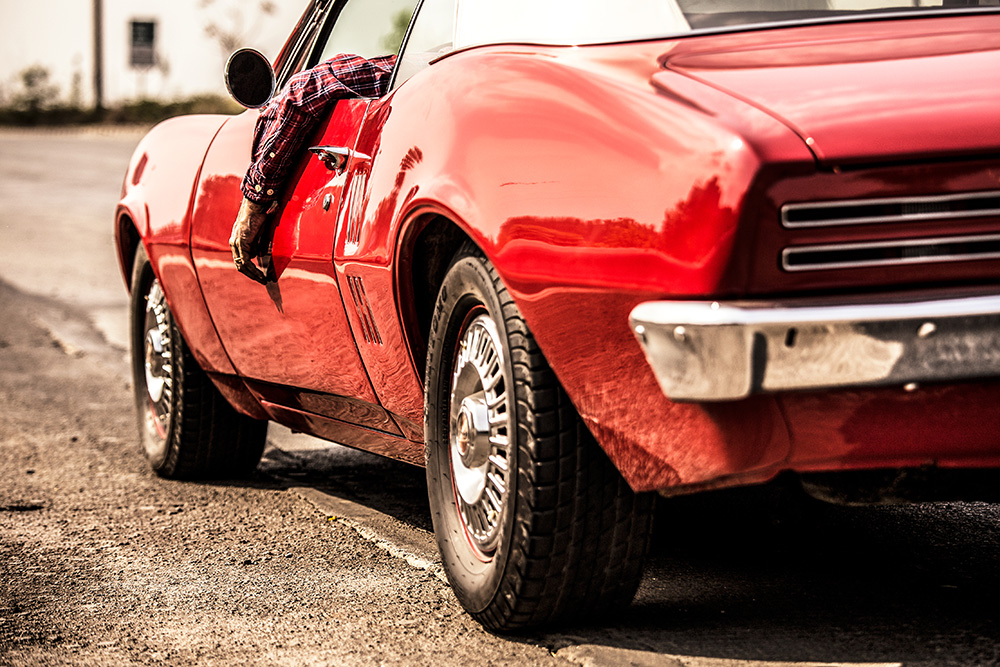 But something is troubling me. Why do you need the car to feel like it should be one with you? Why can’t it just be a vehicle that takes you in comfort and decent speed when you want it? Why does it have to ‘take corners’? Why do you need steering feedback? And handling? What’s the point of requiring driving involvement when you can chill and watch the blacktop unfold? These fundamental but rhetorical questions keep wafting in and out of my mind as I gently out-accelerate other four-cylinder diesel pests. The open road is calling. 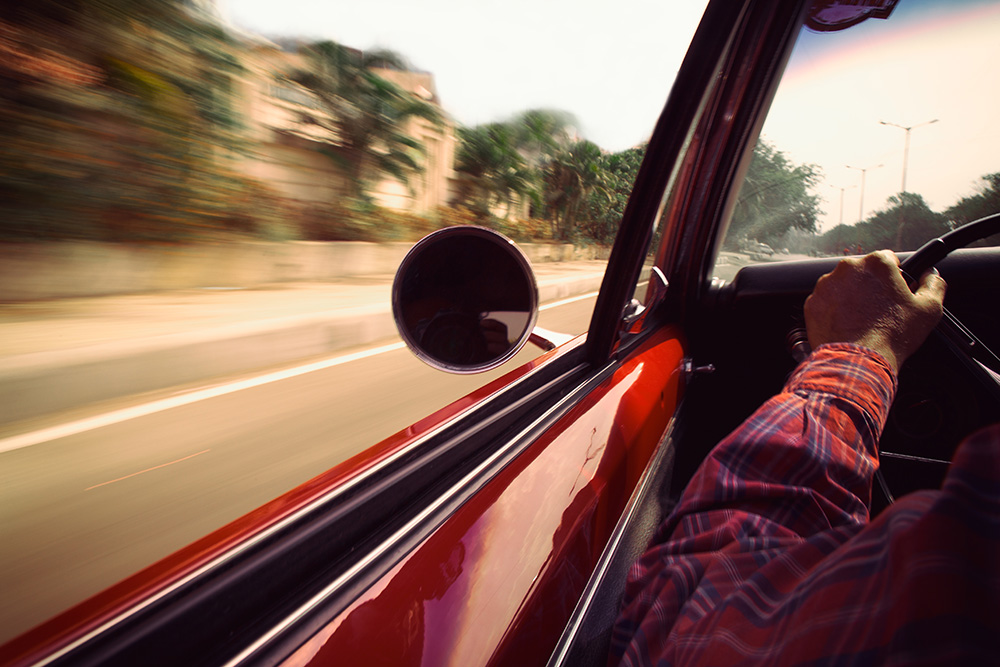 We would like to thank Viveck Goenka for giving us the opportunity to drive this special car for this special issue. Click here to see more pictures of the Pontiac Firebird.