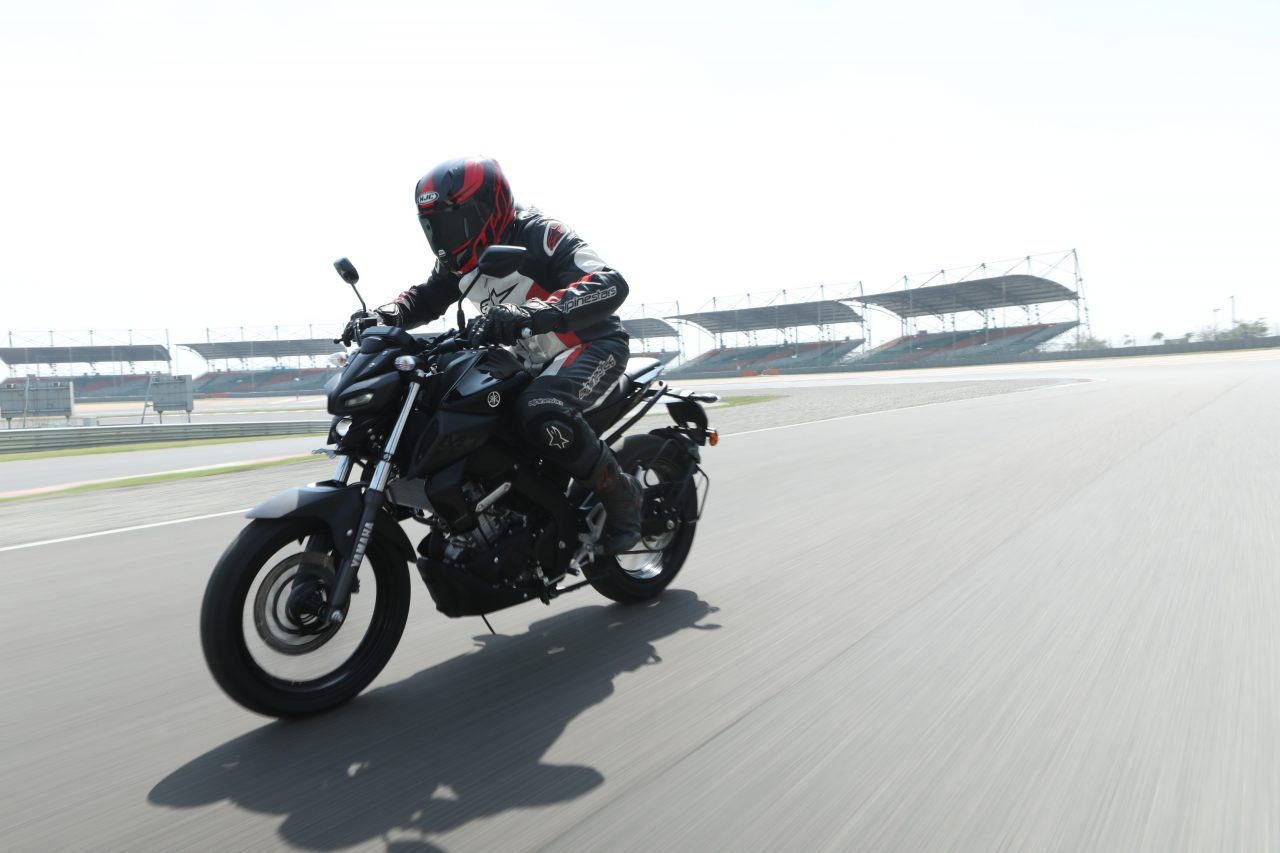 The life of a warrior is fraught with purpose and will-power. The determination in his eyes will guide him through the battles he must face. One look at the Yamaha MT-15 and you’d be properly convinced that this little brawler is here to add a properly sinister twist to the 150cc street-fighter category. Gaze into its eyes and you will be instantly convinced that this motorcycle means business. It’s the street-naked version of the YZF-R15, and it simply oozes grittiness and stealth. That front facade has descended from Yamaha’s MT series but instead, this one’s been chiselled into the face of a samurai warrior’s helmet.  It’s unlike anything we’ve seen in this 150-odd cc segment, except for maybe the Honda X-Blade. But even that pales in comparison to the sheer uniqueness of the MT-15’s mug. 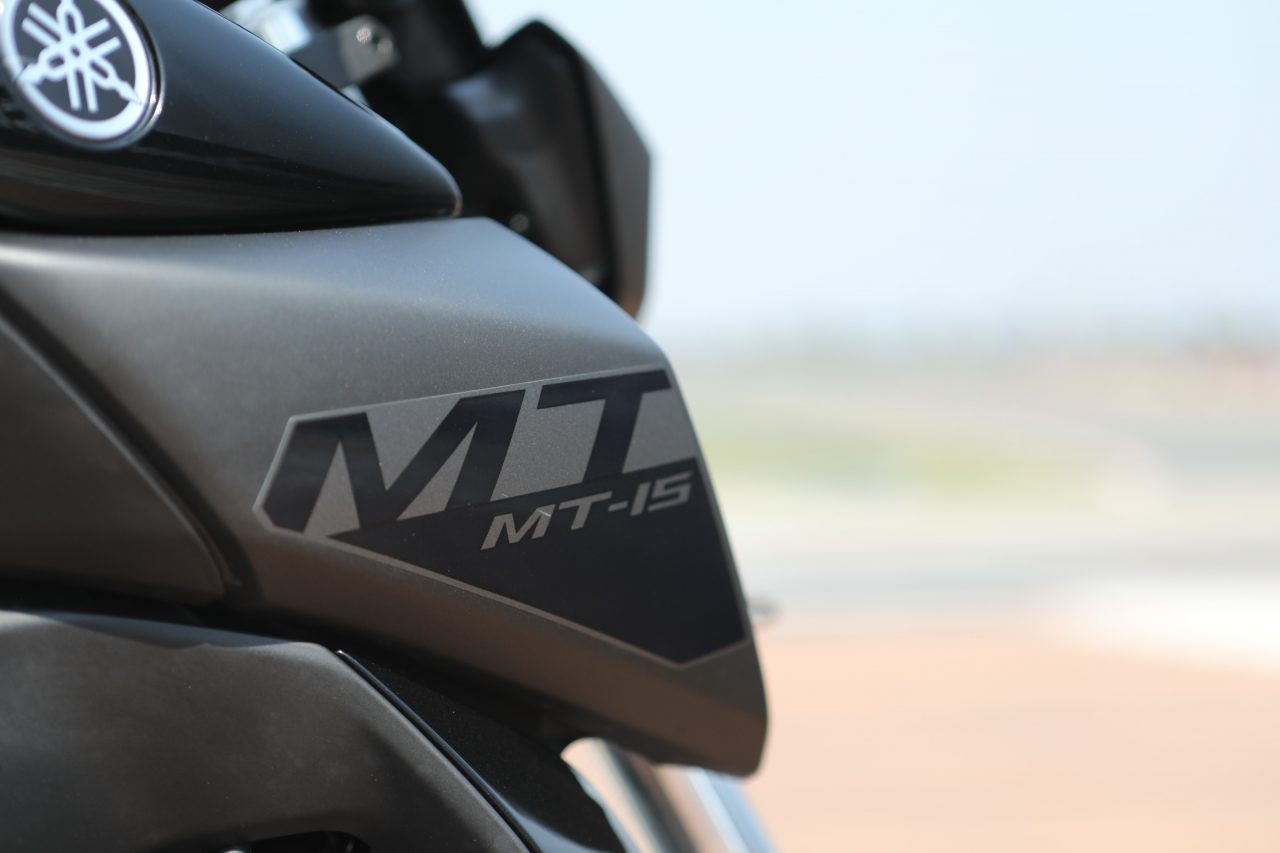 As we know from the pedigree that comes forth from Yamaha’s stables, what sets this steed apart from the rest is outright sportiness. Like the MT-10 is derived from Yamaha’s flagship YZF-R1, the MT-15 is the un-faired, street friendly version of the YZF-R15 V3.0. And technically, you could say that the R15 is by far the most recognizable Yamaha on Indian streets today. Three generations of R-15s have zipped across our dishevelled tarmac. One-make cups and national championships have been battled for aboard this motorcycle. At least for India, it is the tried and tested formula for sheer performance and handling. So why, then, has the street-naked version of it taken so long to reach us? Like with all Yamaha’s exciting motorcycles (and boy are there a few), maybe Yamaha just wanted us to build that craving , or maybe it didn’t feel India was ready yet. Well with the amount of hype this motorcycle created, we are now. The question is, does it really stand a cut above the rest? 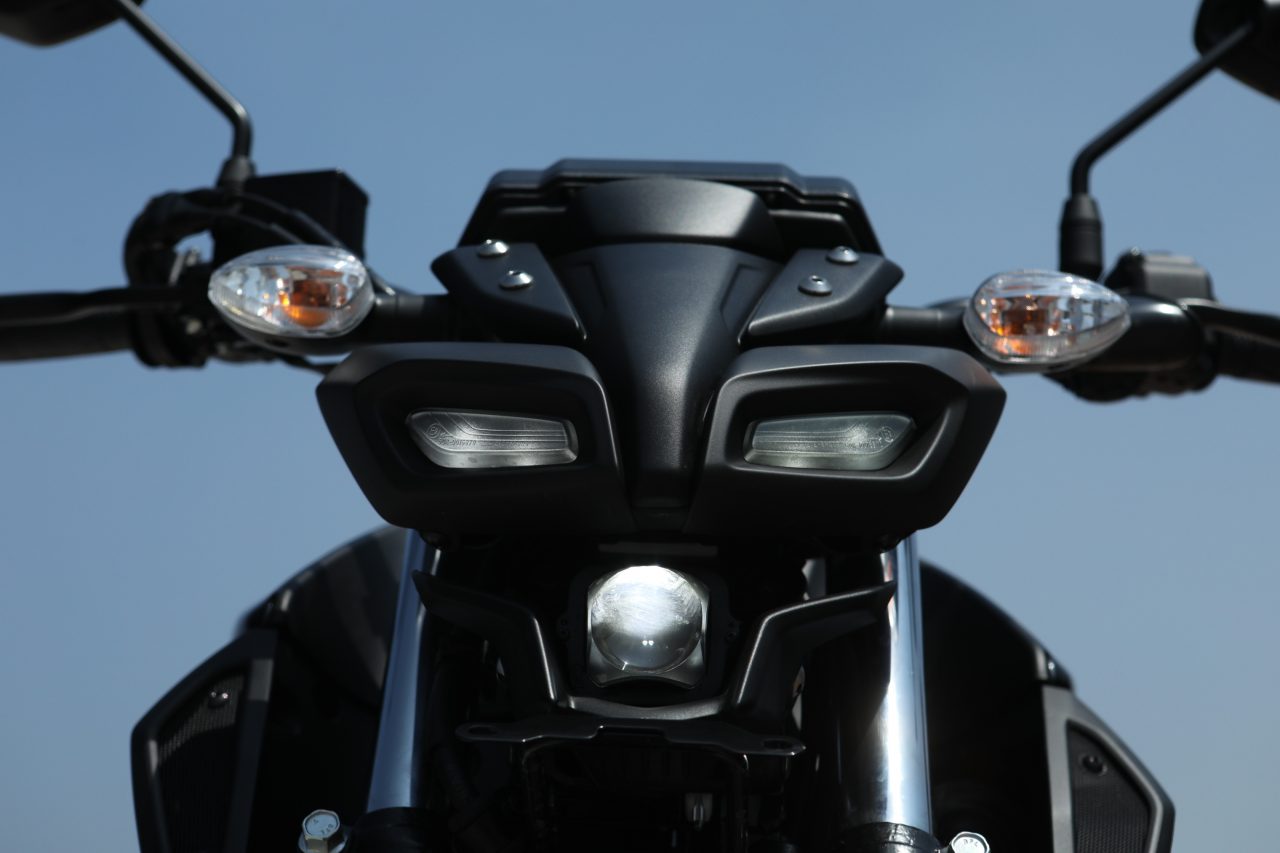 First appearances will absorb you by just how diminutive this little tyke is. On the surface, it appears nothing like the elongated R15; give for the speedometer and switchgear. It’s compact, well-poised, and as I mentioned earlier, just spectacular to look at. The single, stepped seat appears quite tiny too. But once you do get aboard, you’ll notice it’s rather comfortable on the derrière and doesn’t really hamper movement in the saddle. At 810mm, you sit 5mm lower than the R15, but it still feels a tad on the taller side. Although this isn’t really something you’ll worry about much because the bike is fairly narrow. The reach to the bars is very neutral and the width of the bars itself will give you sufficient leverage for tight manoeuvres. The foot-pegs also sit properly beneath you, so the overall seating position is a very natural one. But one more component carried over from the R15 is the exhaust. While it’s throaty note does sound quite nice, I’d imagine a short bottle or underbody exhaust would complement its street-fighter guise a bit further. 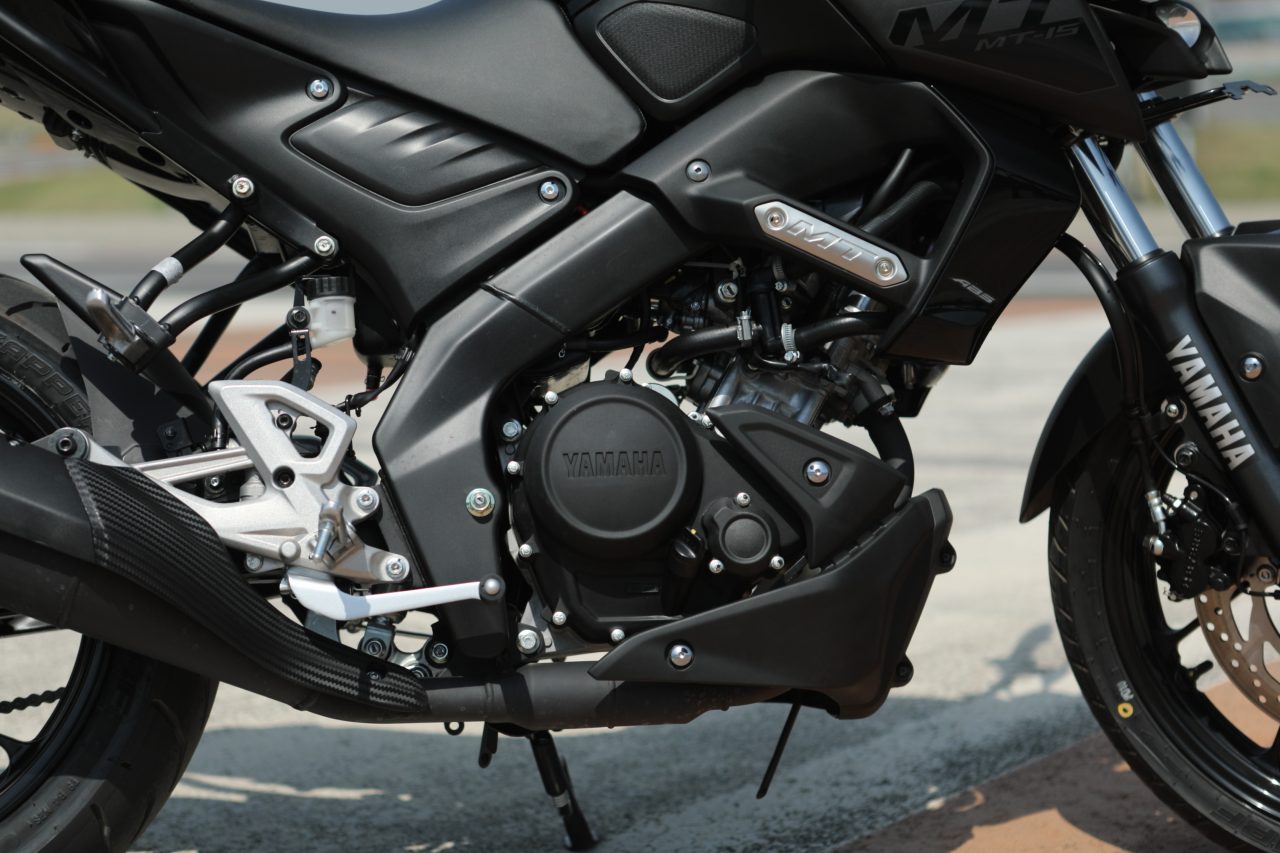 Underneath that serious and rather sullen looking exterior lies the peppy heart of the R15 V3.0; it’s smooth, predictable and lively. This 155cc motor churns out 19 bhp and 1.49 kgm of torque. In terms of power, it’s already punching above its weight category. Of course it isn’t going to suck any of your organs out on acceleration with this sort of power, but it is engaging and acceptably satisfying. It does get Yamaha’s  Variable Valve Actuation technology, which modulates valve timing at either end of the rev-band to give it that little extra boost in performance. Along with the engine, the MT-15 also gets the smooth-shifting and very refined gearbox from the R15 that’s equipped with a slip-and-assist clutch, so there’s no complaints here. What has changed, though, is the final drive ratio; the MT-15 gets four more teeth at the rear sprocket. At the slight sacrifice of top-end performance, this essentially gives it marginally better acceleration and makes the engine feel more responsive. All of which makes it a better setup for street conditions. 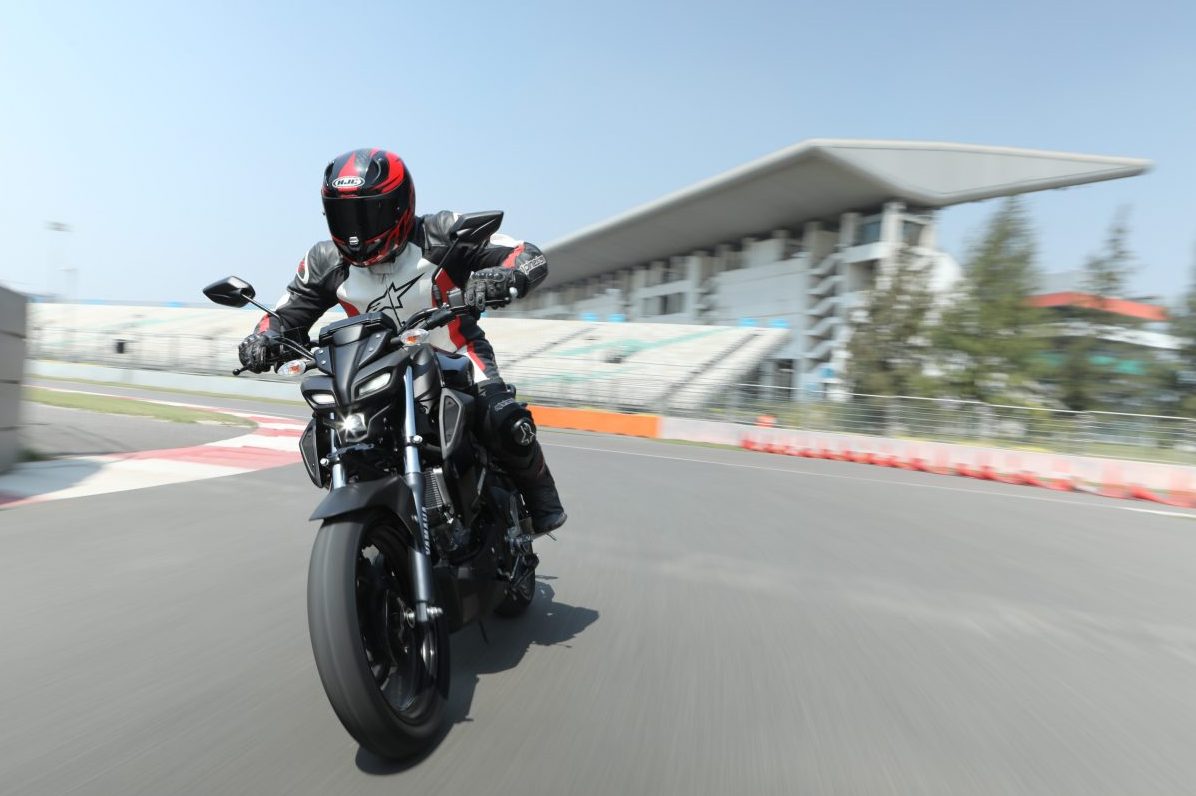 We weren’t, however, testing this motorcycle on the street, no. We had before us the vast expanses that make up Buddh International Circuit. Now this is an F1-grade race track that has been given very generous dollops of space that sing to the tune of the ridiculous speeds that race vehicles attain. All of this is quite contrary to the almost claustrophobic sort of urban conditions this bike will be subject to in the real world. Nonetheless, starters were cranked and much fun was had. I couldn’t imagine anybody that would say no to riding a motorcycle at the race-track; I honestly wouldn’t want to. 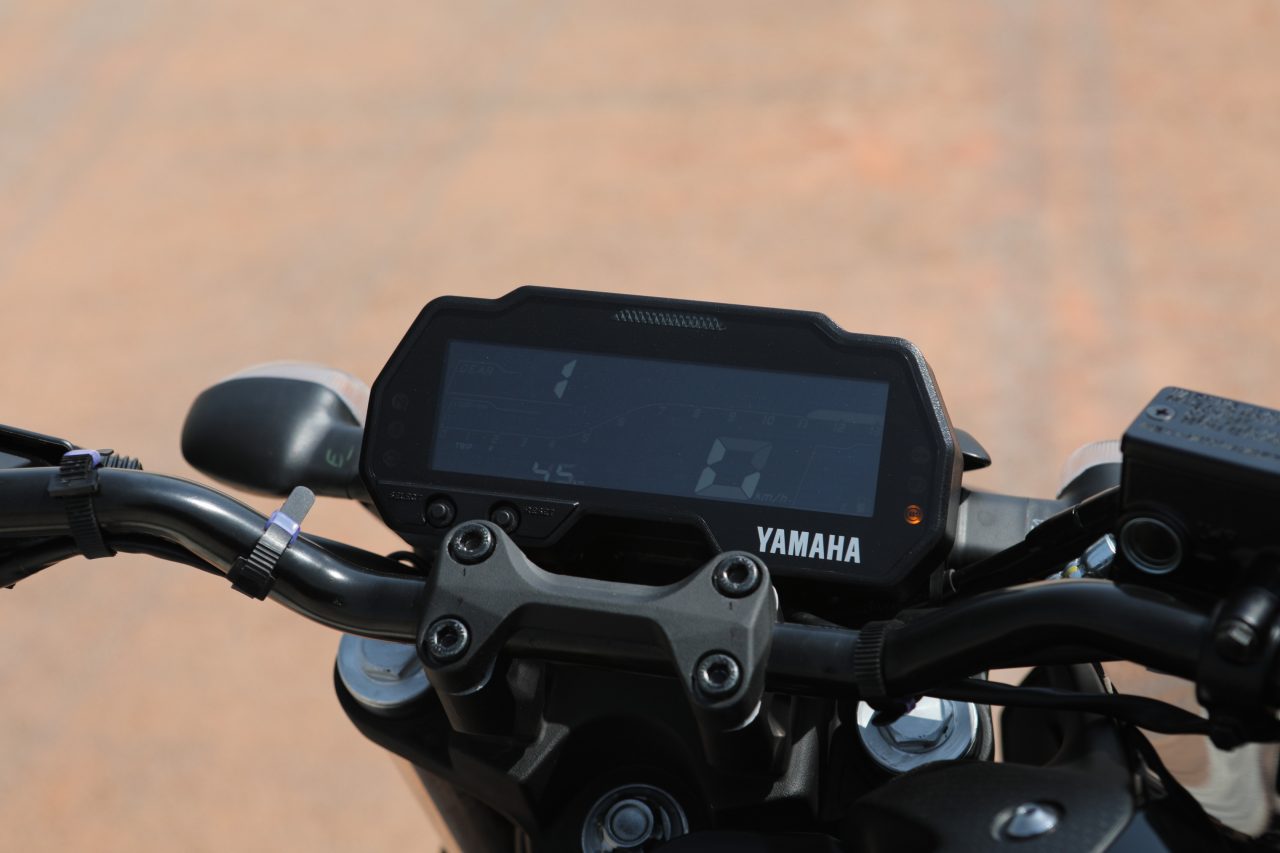 Now despite the perimeter chassis being carried over unchanged from the R15, there’s been one small change that’s made this bike even more urban friendly. While the rake remains the same, there’s been a slight change in which the fork has been off-set a little to reduce the trail. And boy does the MT-15 turn in quick. In fact you’ll need to be a little gentle when tipping into corners so as to not unsettle the bike. While the MRF tyres at the front do a rather decent job with front end feel, stickier rubber would make feedback a lot better and certainly increase cornering confidence. Although the front end does feel a bit light in the corners, it does track true and stays planted. 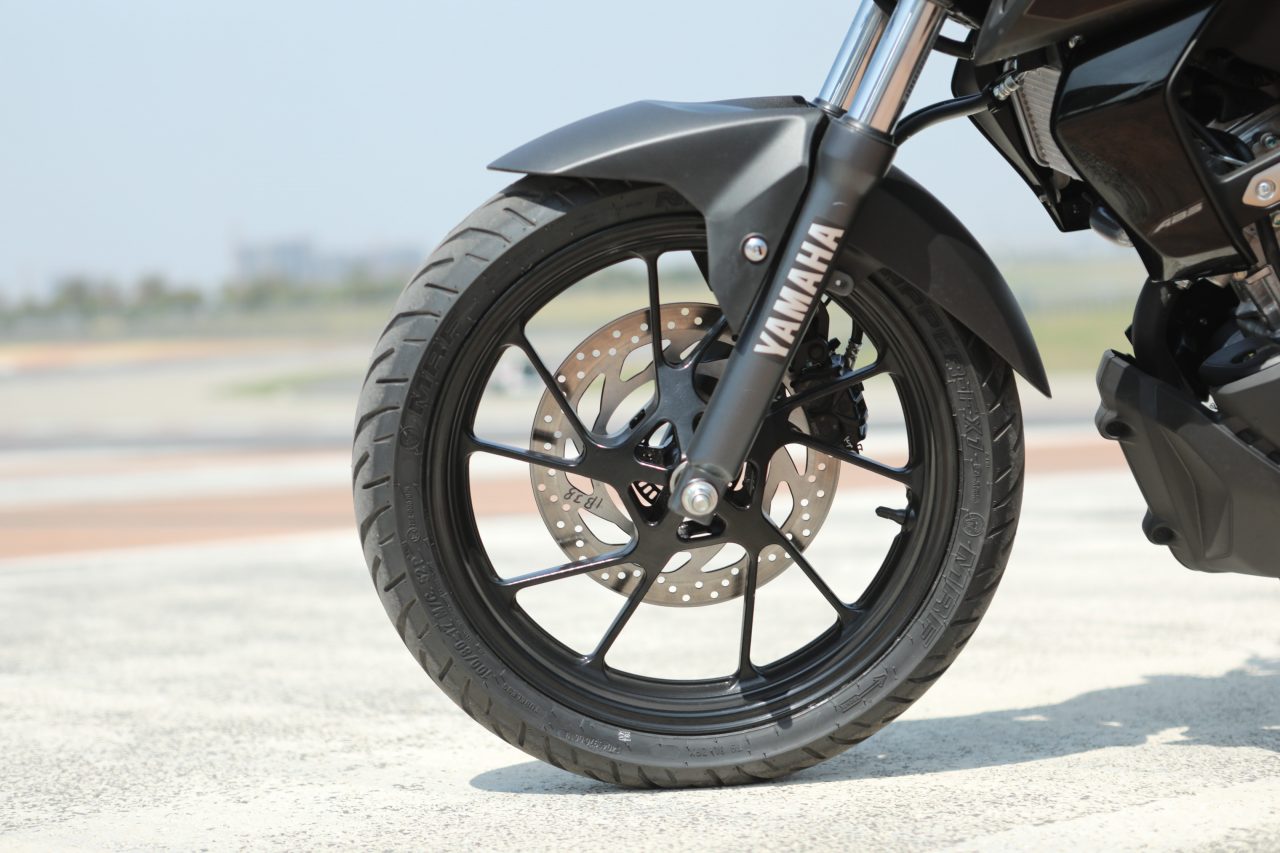 Even the front telescopic forks have been carried over from the R15; the MT-15 doesn’t get the USD ones that the international models do. It also misses out on the cast-aluminium swing-arm and gets a box-section one instead. I’d imagine these are cost cutting measures to keep prices low for the Indian market. But all of these are reasonable compromises. One area the MT-15 seriously needs improvement is the brakes. The 282mm disc carried over from the R15 is just as bad in terms of feel. I did a few laps on the R15 earlier in the day, so I did have a reference point. Though not wooden, it does have a very spongy feel at the lever, and really needs you to yank it in hard for strong braking action. And although the MT-15 does get ABS, it’s a single-channel setup and not the dual one that the R15 gets. 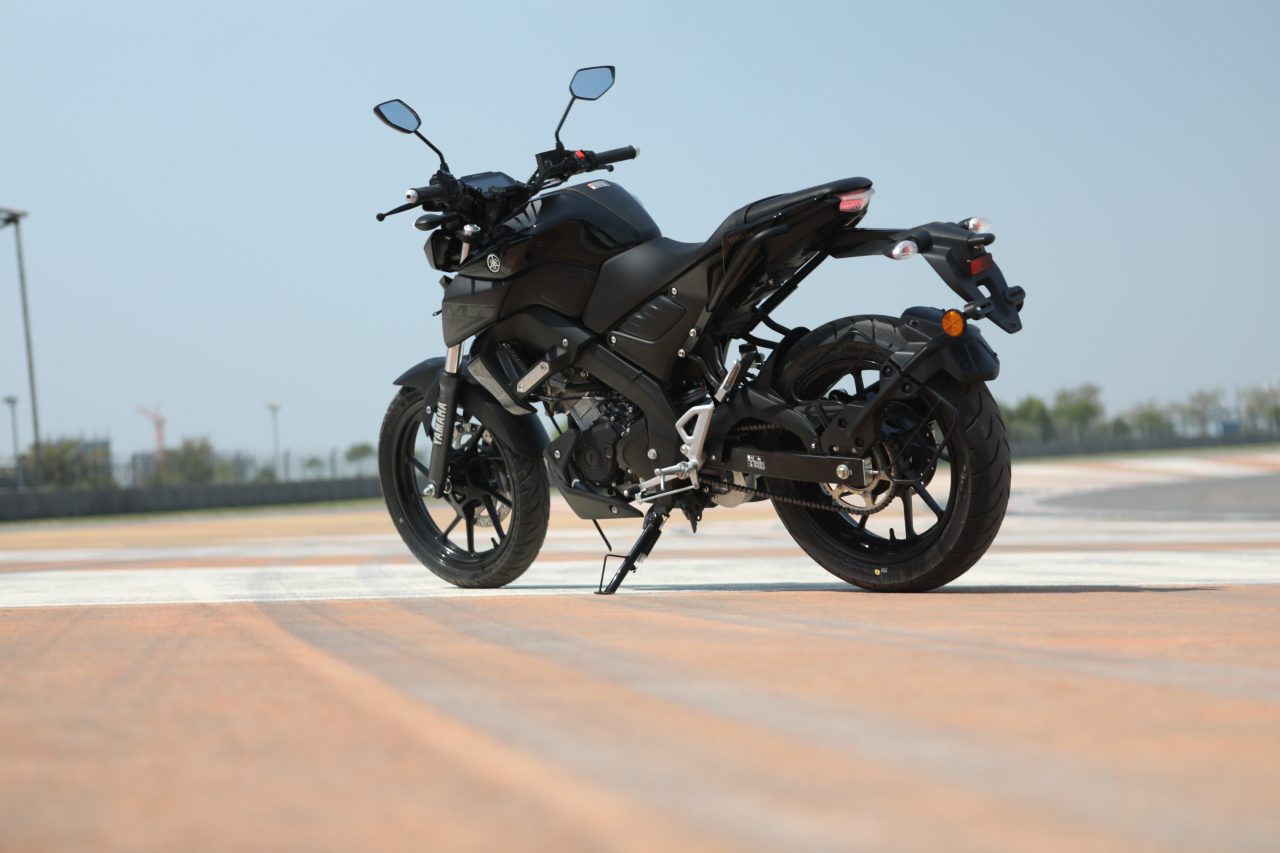 Judging by the fact that the MT-15 loses out on a full-fairing, cast-aluminium swing-arm and dual-channel ABS, you’d expect it to be a fair amount cheaper than the R15, right? Wrong. At Rs 1.36 lakh (ex-showroom, Delhi), it’s a mere Rs 3,000 cheaper than the ABS version of the R15. While you could argue that the headlight unit has been crafted by the katana blade of a samurai, it still doesn’t justify why the MT-15 costs so much more than some of the 200cc street-fighters out there. You’d practically get all these features on an NS200 or Apache RTR200, with slightly better performance. But it’s the uniqueness of the MT-15 that will really get your marbles. It stands out, there’s no denying that. For the Yamaha fan boys that have lusted after the bigger MTs from Yamaha, this is the answer to your prayers. Sure, numbers may say one thing. But as motorcyclists, we all know, a motorcycle is something you buy with your heart, not your mind.