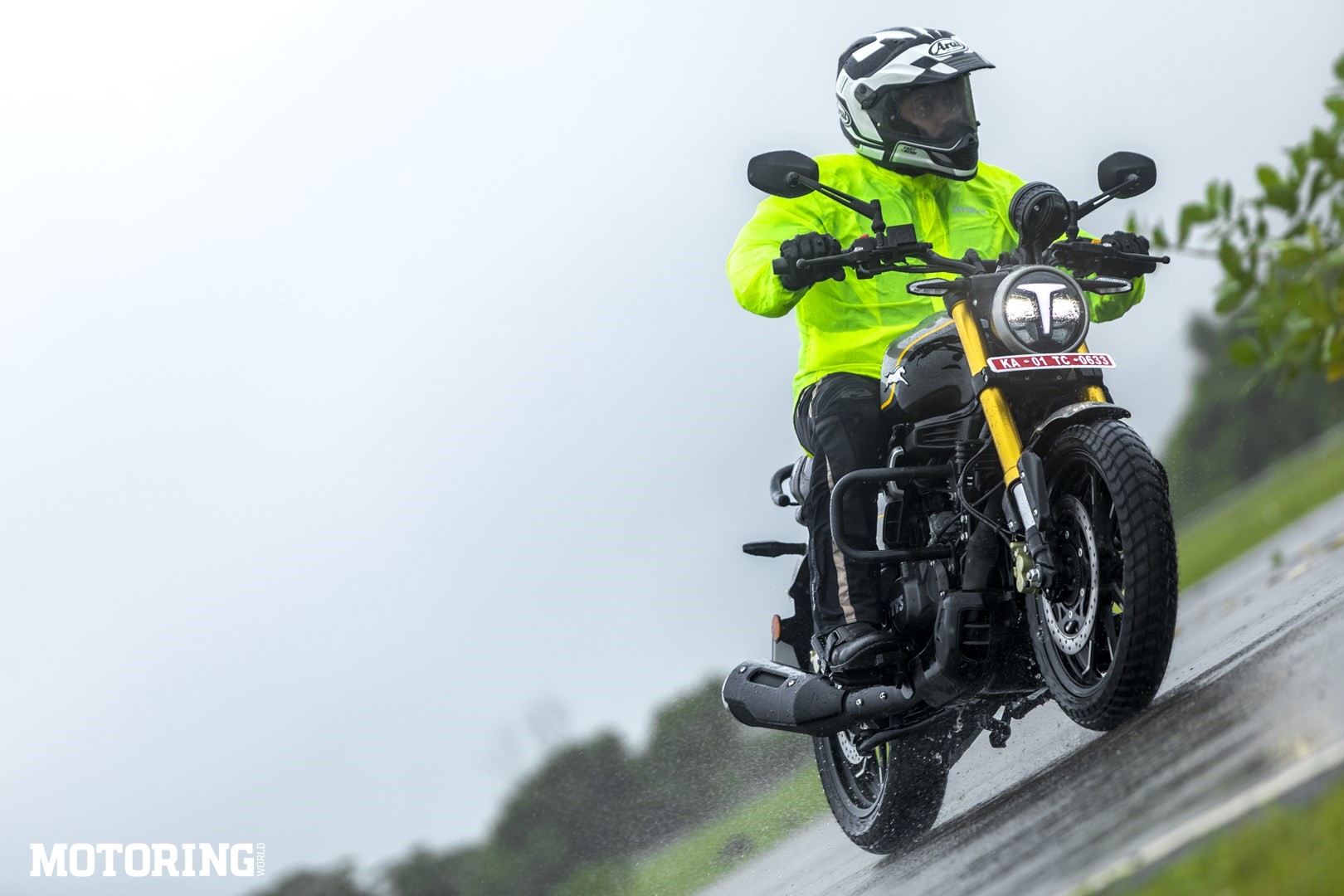 The weather reports weren’t promising. The India Meteorological Department had issued orange and red warnings for the western coastline. It was a concern somewhere in the back of my mind while I was driving through Chorla ghat in the pouring rain with our in-house lensman, with the hope to reach the venue in Goa for the launch and ride of a new motorcycle from TVS. With much luck and limiting the number of halts, we made it just in time for the launch. TVS Ronin, everyone. It’s the newest motorcycle to join the Hosur-based two-wheeler manufacturers’ portfolio. And according to TVS, it’s a bike that hasn’t been put together keeping a specific segment in check. If you’d ask me, going by its profile and the equipment it packs, it’s somewhat a mix between a cruiser and scrambler.

TVS has been on the role of late, with machines like the NTorq 125, Radeon, Raider and the now much-improved Apache RR 310 rolling out from the production line, I was confident that the Ronin would also be a good bike to ride. More on that later. However, what had me concerned and confused was the bike’s design. How good or bad a motorcycle looks and appeals to someone is a completely subjective matter, but I am a bit unsure about this one.

TVS has gone ahead with a minimalistic design with the Ronin. The bike has an exposed chassis that is prominent at the rear. It has a large 14-litre metal fuel tank, side panel, short fenders and faux air scoops to give it a muscular appeal. Other bits include 17-inch nine-spoke wheels that look attractive that come shod with block thread pattern rubber, a chunky engine guard, and a nice-looking megaphone exhaust. In my opinion, I like the first half of the bike, up to the fuel tank. But not so much beyond it. It feels as if the designers were in a rush to finish the tail section. The overall design is a combination of a retro-cruiser and a scrambler, from what I can see. It’s kind of an oddball, to be honest, something that only time will tell how it gets accepted once it starts to make its appearance on the street.

Don’t quite agree with the design, do you? Well, TVS has compensated for its different approach in design by packing the Ronin with a healthy dose of features and cycle parts. To start with, the bike features all-LED lighting with a signature T-shaped pilot lamp for the headlamp, a Bluetooth-enabled all-digital instrumentation console with turn-by-turn navigation, top speed read-out, battery voltage, call/message alerts and some more. The pod has been positioned on the bar at an offset, which looks nice. The unit stands a bit taller than what I would want, but TVS says it is so keeping easy viewing and clear visibility in check. Coming to the cycle parts, the test bike sported a gold-finished USD fork setup at the front, which I liked a lot. Meanwhile, the rear gets a monoshock with preload adjustment. Brakes are an all-disc affair with dual-channel ABS for the top-spec variant TD, the bike you see in these images. Single-channel ABS is offered for the other two variants, SS and DS. 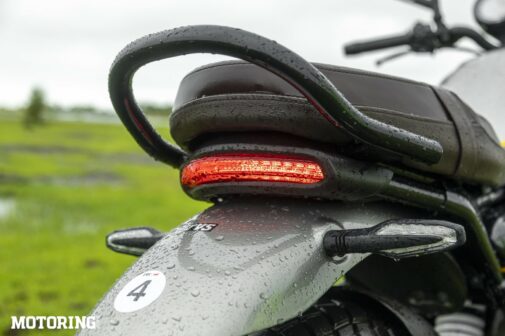 Underneath, the Ronin has been built around a new tubular cradle frame that also holds a reworked 226cc mill that powers the bike. The engine is based on the RTR200 but has a longer stroke, the same as the bore diameter, making it a square-engined unit. While the RTR’s short stroker offers its peak power at the top of the rev band, in the case of the Ronin, the meat of the motor is concentrated at the mid-section of the rev band. While the power produced is similar to that of the RTR200, the torque figure is higher and is available much earlier around the 3000 rpm band. What hasn’t changed is the five-speed gearbox, which continues to be the same as the Apache’s. Like all their recent lineup, TVS has been bullish about the technology that goes in their engines. The air and oil-cooling systems have been optimised for better heat dissipation, while the engine internals like the crank and camshaft bearings are optimised for maximum lubrication and to perform consistently even under load. This helps in more effective heat dissipation and butter smooth operation of the mill.

On the go, TVS has managed to converge all of the above and delivered a motorcycle that is good fun to ride. With the abundance of torque available early, the need to shift down cogs becomes redundant. Apart from popping wheelies wherever the opportunity allowed me, the Ronin is a pleasure to ride in the city. Accelerating from the third gear after going over a speed breaker? No problem. Climbing an ascending gradient in the fourth gear? Piece of cake. And that is from as low as 30 kph. Exactly. While riding through the narrow lanes of Goa, navigating through traffic, I rode the bike in the fourth and fifth cogs, most of the time. And to add to the motor’s tractable character is the throaty exhaust note that sounds nice to the ears as you start to gas it from the low end. The motor comes with TVS’ Glide Through Technology (GTT) which makes it very easy to ride the bike in stop-and-go traffic without stalling. 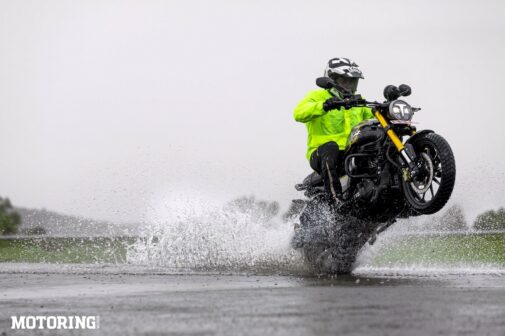 Now, the roads in Goa are nearly free of potholes, the polar opposite of Mumbai. So, most of the riding was on the smooth tarmac with not much chance to experience how the bike’s suspension dealt with bumps, dips and other undulations. From what I could understand, the ride quality is plush and composed, and it gets better when riding two up. But, what surprised me more was how the Ronin corners. Despite the block pattern tyres and the long wheelbase, the bike tips into corners naturally. There is a feeling of easy-going that is prevalent considering how the bike is designed and its riding triangle, but that didn’t deprive me of carrying more speed and leaning into the corners, especially given the wet conditions. As for the brakes, I was content with the feel and progression that was available at the controls. Even the Road and Rain modes of ABS intervention could be felt with the change in pulse at the lever, whenever it kicked in.

I feel it is safe to say that all the above aspects of the Ronin are hard to go wrong with, considering the motorcycle is from a company like TVS. But what brings all the bits together is the saddle experience. The seating ergonomics have been designed keeping comfort at top priority. The seating is upright, with arms slightly stretched out on the wide handlebar and neutrally positioned foot-pegs. The riding stance is exceptionally comfortable yet engaging, making the Ronin a credible motorcycle for long hauls. For the time spent on the seat, the cushioning felt to be correct for the city roads. The contour of the seat ensures a flat footing when stationary and decent under-thigh support on the move. 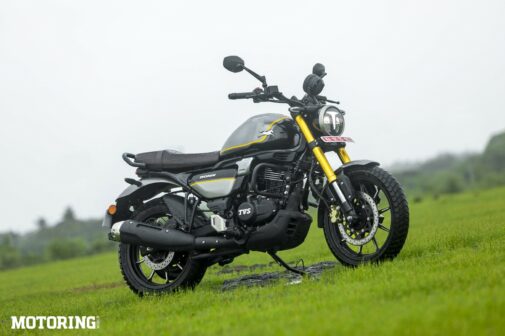 To sum it up, the Ronin comes across as a disproportionate motorcycle to look at first, but once seated and on the go, it’s the comfortable and engaging ride experience that makes you overlook the confusing visual aspects of the motorcycle. It is also possible that with time, the design could gain a liking, but that would take longer than usual. The bike has the premium touch and feel overall, but somewhere loses out giving out that aspirational value as to why one should buy one. Yes, TVS has priced the Ronin quite well, with the base model starting from Rs 1.49 lakh, going up to Rs 1.68 lakh for the top-spec variant. If not the looks, it is the price that should draw the attention of buyers for the Ronin. That said, whether TVS has indeed carved out a new segment is a question of time that will be answered on the basis of how the Ronin gets accepted by its buyers.