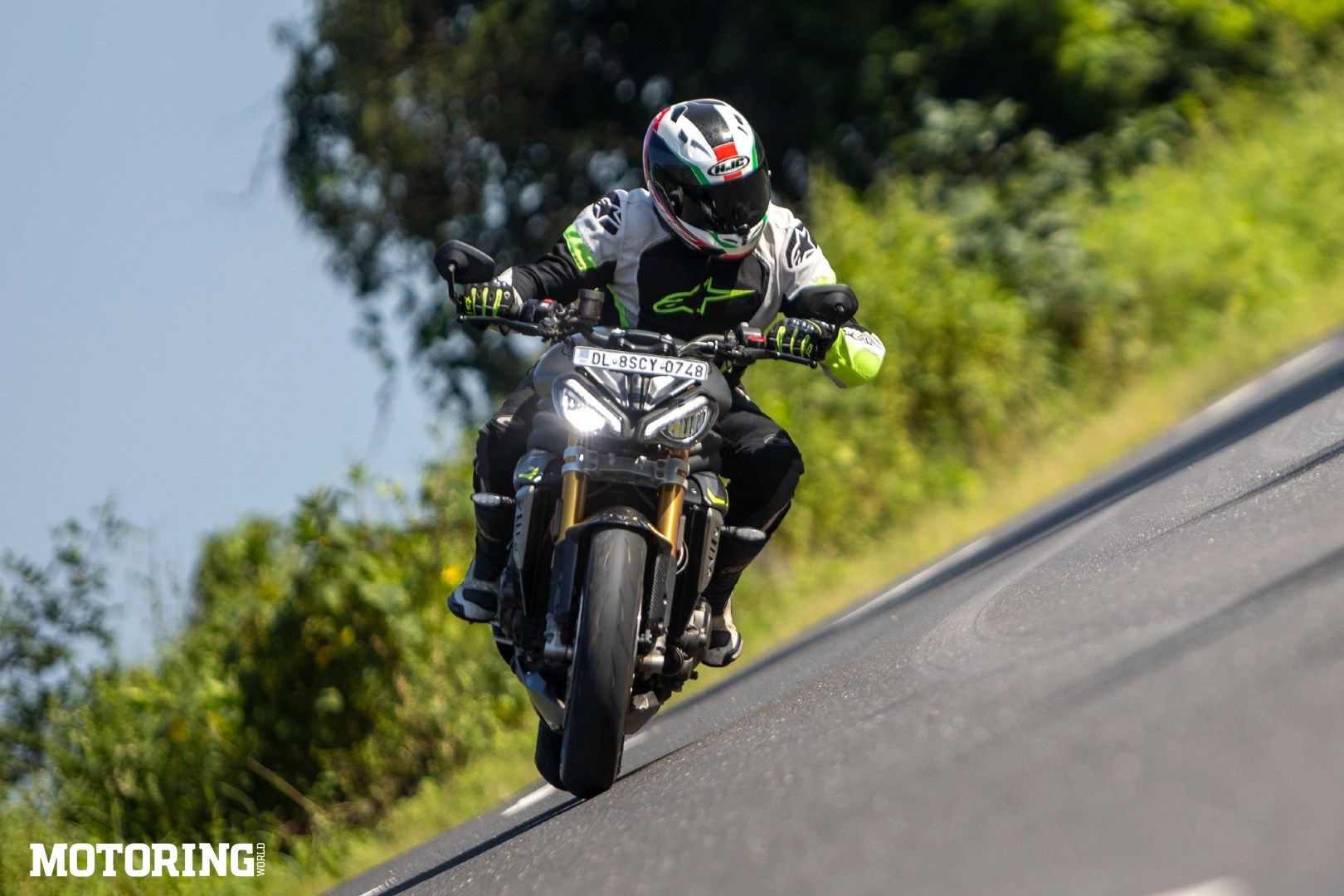 One could say the thrill of riding a fast motorcycle hasn’t quite changed much over the years. But speed is a factor that has been exploited, time after time, with the constant pursuit to score a higher number. And it is that very factor that left me stupefied after whacking open the throttle of a near-180-bhp naked motorcycle. I have ridden the Street Triple RS, Triumph’s 121-bhp middleweight naked on multiple occasions, and I am absolutely smitten by it. What I hadn’t mentally prepared myself for was what happens when the word ‘Street’ gets replaced by ‘Speed’ in Triumph’s dictionary. In simple terms, the Speed Triple is a Street Triple RS and a half which means you are signing up for absolute brutality with neck-snapping acceleration and vision-blurring speeds.

The Speed Triple 1200 RS is the flagship bike in Triumph’s naked roadster lineup. And in case you weren’t aware, the Speed Triple series is responsible for this mad litre-class naked segment that exists today. It has led to the existence of some menacing motorcycles like the Aprilia Tuono Factory, the Ducati Streetfighter V4 and the BMW S 1000 R, to name a few. While my stars are yet to align themselves for the day when I get to ride the other bikes, I did get to ride the latest and the most powerful Speed Triple that Triumph has built to date.

Of course, Triumph went ahead and chose only the best cycle parts that you’d mostly see on track-ready motorcycles. You’ve got top-spec Ohlins suspension at both ends that’s fully adjustable, Brembo Stylema Monobloc front brake callipers with an MCS radial master cylinder, Metzeler Racetec RR tyres, five customisable riding modes, and all the sophisticated electronics wizardry you’ll ever need. For the last bit, what I am referring to is different levels of cornering ABS, traction control settings and lean angle monitoring for an impeccable track experience. And you know for sure they aren’t fooling around when there’s a rider-configurable mode involved.

Triumph has stuck with the fox-eye headlamp design that looks properly menacing. Staying true to the streetfighter look, it comes across as a sportsbike or a race replica sans any plastic fairing for aerodynamics, which has always been the way of the Speed Triple. The underseat pipes are gone and replaced by a single can on the side, with two exits. The test bike featured the Matte Silver Ice livery which looks rather understated, but some contribution from the small fluorescent yellow highlights does help matters. It’s far from a sleeper, though, because the thick golden tubes of the Ohlins suspension and the large 320-mm twin brake rotors with the chunky calipers are clear indicators of the kind of power they’re tasked to harness.

The Speed Triple’s motor is an all-new mill that has undergone a bump up in displacement (1160cc up from 1050cc), and it now has an oversquare piston design and an improved stack-type transmission design that’s more compact creating space for a large airbox and a longer swingarm. The motor produces a staggering 30 bhp more than the previous bike. Yes, you may take a moment to let that sink in. To top it off, the blokes at Triumph’s engine department have managed to shed 7 kg on the engine alone, despite all these gains. And to go with that even the aluminium twin-spar chassis is now stronger and lighter, further reducing the bike’s weight and complementing its power–to–weight ratio.

There are two ways to ride the Speed Triple 1200 RS. One is below the 6500-rpm mark where you can enjoy all the equipment and features that the motorcycle has to offer while still going fast, a kind of a safe zone. And if you do venture to the other side and head towards the redline, be ready to play a game of chicken with the devil himself. You might feel that I am exaggerating here, but trust me, I’m not. Every time I twisted my right wrist, I would upshift without even daring to look down at the 5-inch TFT display. Not because I didn’t want to, but I just couldn’t. I was constantly fighting with the bike and praying at the same time for the front wheel to not take off. The rate of acceleration is so brutal that tunnel vision is always moments away. And that experience gets all the more engaging thanks to the typical exhaust note of the triple. On the Speed, it has more of a howling tone that only gets better with speed amplifying the raw power of the motorcycle. 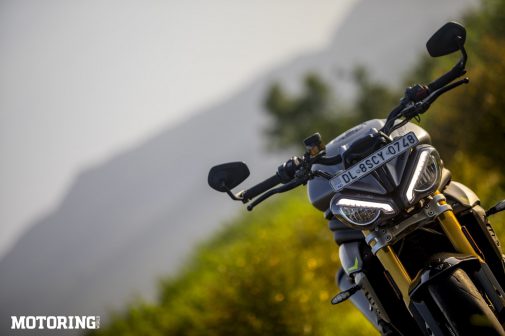 Now, to even stand a chance to win against the devil, you’d want all possible parameters to be in your favour, right? What I mean by that is, the Speed Triple’s atrocious power can get overbearing and with that power on the street, it becomes a frightful combination that can go against you with little warning. The reason for this can be linked to the bike’s suspension. Yes, it’s one of the best setups out there, but given the constantly changing road conditions, electronically-adjustable ones would probably be more apt. Having to manually set up the suspension makes it challenging to set it to match the street conditions. Also, although the suspension was set to neutral settings, the ride is predominantly on the stiffer side which becomes hard to live with for street riding. And this somewhere affects the cornering confidence as the bike feels quite unforgiving. But, if there is one thing that I loved the most, it has to be the brakes that do a stellar job of stopping on a dime. There is so much bite force that you can challenge yourself to stop before the intended stopping marker because it can and will. 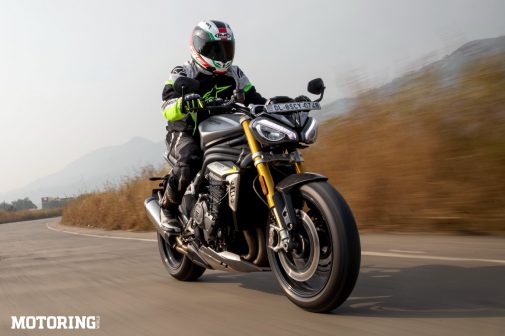 The other bit that stood out for me was the instrumentation. No doubt it looks fantastic and the information readout is clear, too, but its operation is rather slow when it comes to browsing through the menu and it’s also tedious as one needs to toggle through a few steps just to know the fuel level/ range or even check the bike’s odometer. Next is the quickshifter which felt kinda rubbery whenever I was shifting cogs; it lacked feel which made it difficult to be sure if the ’box had indeed slotted in the desired gear. Then again, it’s possible that it was only with this test bike. My last bummer with the Speed Triple is the lack of a windscreen; there was practically no way I could avoid the wind blast other than crouching down close to the tank. And it was only on the following day that I realised from the body ache how much I was fighting against the wind. 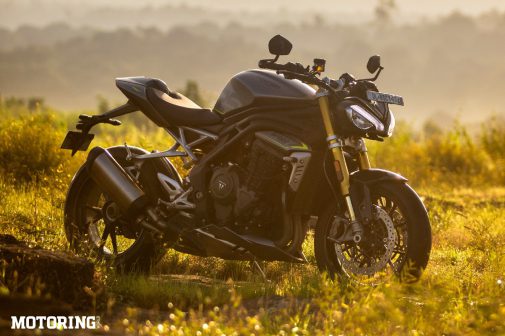 So, after everything that’s said, is Triumph’s Speed Triple 1200 RS a good bike? It’s a definite yes from me, but it’s probably too much to handle on the street. It has all the premium parts to excel, is agile and has ample power and torque, but requires an ideal environment that involves roads that are smooth and open to make the most of it. And on that note, if you had to ask if anyone should consider buying it, my only condition would be if you plan to ride it on a racetrack. Speed is better off in that environment, not on the street, right?