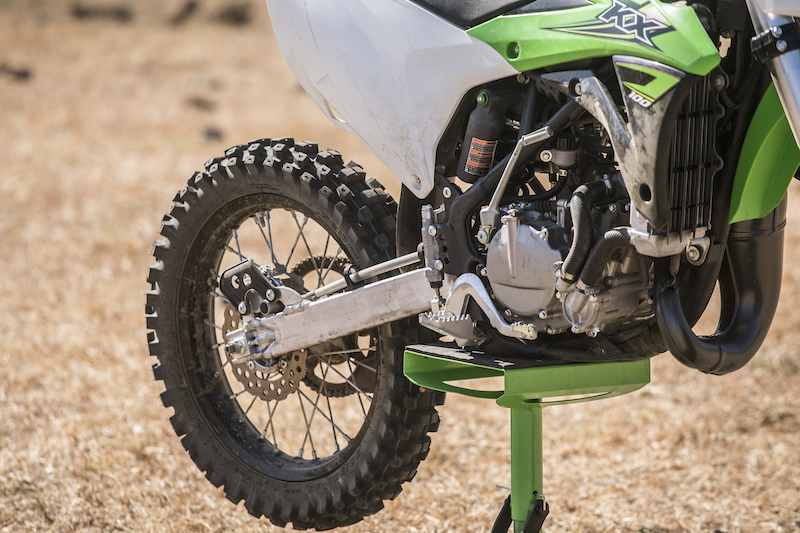 Ever since I went on last year’s Royal Enfield Himalayan Odyssey, off-roading has caught my fascination. It feels more connected and visceral for some reason, compared to road riding. And there is a lot more sliding, which is always a good thing. So when the news came along that Kawasaki were launching two of their most acclaimed motocross bikes, the KX100F and the KX250F, and inviting the media to have a go at them, I was ecstatic.

I’ve never touched a motocross bike, let alone ride one, but I knew this was the pinnacle of off-road riding, and I was raring to go. Since these aren’t road legal, Kawasaki called us over to a lovely dirt track in Kamshet, that is owned and run by Ajmera I-land, and had been specially prepared for this event. By ‘prepared’ I mean jumps, bumps and turns were designed to be more in-sync with our complete lack of motocross experience, and to save Kawasaki potential hospital bills thanks to over-enthusiastic journalists. There was a long straight with hard loose mud, followed by a couple of jumps and banked turns, interspersed with soft sand and rumble bumps. And to show us just how capable these machines are, they also got motocross badass from Delhi, Prince Singh. But clearly Kawasaki felt that wasn’t enough of a shot to our egos, so 11-year-old Yuvraj, a C S Santosh in the making, was there too, just to reaffirm what we already knew — that we knew absolutely nothing. Like Jon Snow.

Anyway, presentations and refreshments later, the moment finally arrived. It was time to finally fire these up. I first went for the smaller KX100F, which Kawasaki call a mini-motorcross. Powered by a 99cc two-stroke motor, this is what a beginner bike is like, we are told. It weighs an anorexic 77kgs, and sure feels like it. The long flat seat, easy to reach handlebars and footpegs feel quite natural as I start off on a sighting lap, following Prince on his KX250F. So far so good. The throttle response is urgent, but not scary, and as I approached the first mound, the wave of torque just carried me over effortlessly.

Soon the sighting lap was over, and it was time go all AMA on this.

On the main straight, I opened the throttle all the way, and for the first time understood why motocross racing is so very different than road racing. It’s not about the difference in surface, but about unlearning everything you know. Here, the rear is sliding, the front is sliding and the bike is rocking side to side too. The solution? Opening the throttle even more, which goes against every intuition when your front tyre is slipping. But it works. Those tyres seem to be fitted with rubber claws, kicking up plumes of glorious dirt every time I let my right hand get frisky, and propelling me onwards, never once losing grip. Of course, not being as brave (or as well-trained) as Yuvraj, I hit the brakes hard every time I approached a jump, fearful of landing on my head, and those dual-pistons would yank speed down in a manner unbecoming of something on dirt.

With time being limited, I quickly outgrew (or so I believed) the KX100F, which I found to be a great introduction, and I wanted a go on the real deal, the KX250F. Now this one did intimidate me by its very presence. 249cc of four-stroke madness ready to be unleashed. It had rider modes for different surfaces, and even a launch control, besides its 48mm of suspension travel up front. But you know the hardest part of it all? Getting on. With a seat height of 970mm, it would’ve been easier climbing onto a horse.

Once I got moving however, it felt sublime. Smoother than the KX100F, with more room to move about, and a lot more comfortable to ride standing up, but way more powerful. While I could go full throttle on the straight in the KX100F, it was too scary on this, as the back end would kick out violently, and the bike would threaten to spit me off as it clawed for grip in the gravel, but I was slowly getting a better hang of it. Motocross riding is all about communicating with the surface below you, and being comfortable with it moving around. I was getting in the groove, and all set to finally attack the bumps and attempt a jump. I had been seeing Prince and Yuvraj do it all day, and my excitement had peaked. And yes, it ended exactly as you imagined. In a crash. I did jump, but it’s the landing that gets you. The suspension comfortably absorbs the impact, but it was my shamefully unfit torso that couldn’t control the momentum, and I went over the bars. Lesson learnt, then. It also brought to light just how physically demanding riding a bike like this is. You need to constantly move up and down the length of the bike to maximise traction, and all the time grip the tank tightly with your knees. Most of us, me included, were completed wasted after barely 15 minutes out on the track, but it was an experience of a lifetime.

Kawasaki strongly believes that a market exists for such bikes, and hopes that with the launch of these two, interest in the sport will grow even further. Of course, they aren’t cheap at Rs 4.69 lakh for the KX100F and the Rs7.14 lakh for the KX250F, both ex-showroom. But since these can’t be registered for road use, the only expense you endure on top of the said amount is the transport charge. This is a bold move from the Japanese manufacturer, but if rumours are to be believed, others are following in their footsteps, and in a year or so from now, we could have a couple of factory teams battling it out for top honours.

As for me, I’m just glad I got a first-hand experience into understanding why Valentino Rossi and other MotoGP riders swear by motocross and flat-track racing as the ideal means of practice.