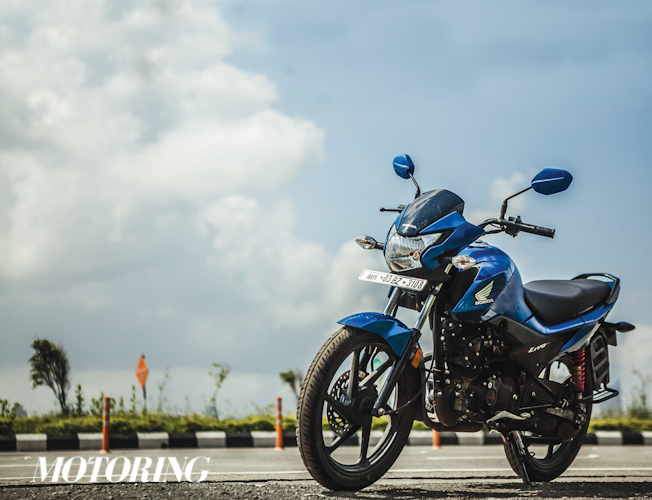 Commuter motorcycles. Sound interesting? No, didn’t think so. Even the word ‘commuter’ sounds about as stimulating as watching paint dry. But they sell in big numbers here and are unavoidable, so it’s nice when manufacturers go the extra bit and try to shake things up. The Honda Livo is a good case in point.

What you have here is its newest attack at the 110cc segment, and right off the bat it’s off to a commendable start. The diminutive proportions aside, the Livo is actually quite the good looker. The angular headlamp, the flanks on the side of the tank, and the clean lines right through would really appeal to those swayed by minimalism — a point that’s further conveyed by the fact that gaudy and unnecessary graphics have been skipped altogether.

The Livo we have gets a black and blue theme, which I think works brilliantly, and once you’re astride it, you’ll notice that the instrument cluster’s simple and easy to read. If this is Honda’s attempt at redefining commuters, it’s going swell so far.

Powering the Livo is a single-cylinder 109cc air-cooled block that puts out 8.25 bhp and 0.8 kgm of torque. At this point, you may be thinking that these numbers seem inadequate, and if you think I’m going to say otherwise, you have another think coming. The Livo doesn’t compute things like being in a tearing hurry or having any sense of urgency, and why should it? Its intention is to get you to point B in a calm and laidback manner, and it excels at that. There’s a decent amount of grunt lower down to make the heartache associated with traffic bearable, and its 4-speed gearbox is typically smooth for a Honda (although that toe-and-heel shifter is a bit of an annoyance). The only thing is that you have to make sure you acquaint yourself with the all-up configuration to save yourself from looking like an imbecile in traffic.

As for the stopping power, Honda’s given the Livo a 240 mm disc up front (optional) and a 130 mm drum at the rear, and that’s adequate, really. Even the telescopic forks and the dual shock absorbers at the front and rear, respectively, allow you a decent ride to the office and back.

Overall, the Livo impresses you with what it stands for. It won’t come cheap, though. It retails for ` 57,090 (ex-showroom, Mumbai), but it’s quite possible that Honda’s pioneered a new breed of 110cc motorcycles with the Livo; ones that you wouldn’t mind swinging a leg over. Heck, if ‘commuters’ could be half as nice  to look at as the Livo, we could even think of scrapping that yawn-inducing word altogether.