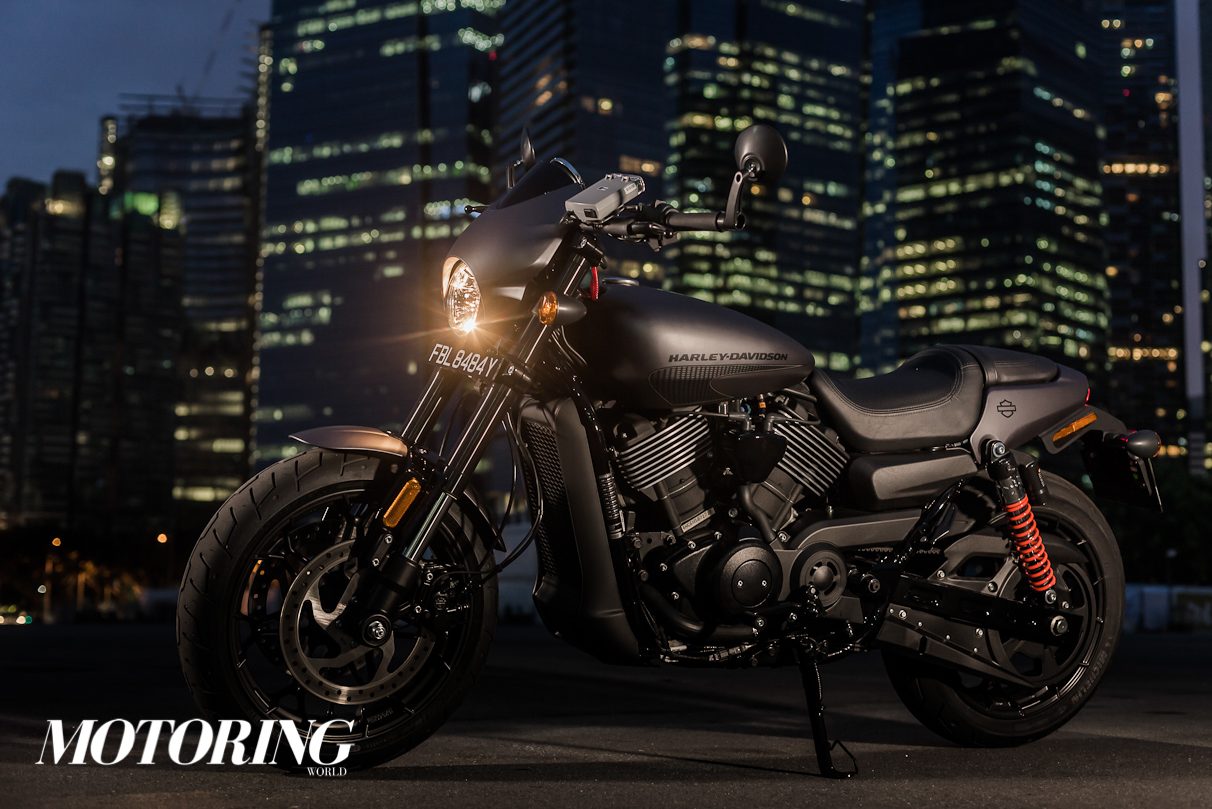 ‪I am not, and will never be, a fan of the Street 750. To me, and I’m sure to many others, the Street is just not a ‘real’ Harley and to take the liberty of saying this despite it being the most affordable and also one of the fastest-ever Harleys must mean I just really don’t like it. This is absolutely true. A Harley-Davidson is the definition of two-wheeled liberation. It’s the automotive icon of freedom and I say this based on an assessment of merit rather than as a victim of its age-old marketing spiel. The Street, in that scheme of things, just doesn’t cut it. It’s a good motorcycle, but there are many others like it. There’s nothing reverential about it.‬

‪The Harley-Davidson of today, thankfully, and I’m saying this in reference to the marque, is a machine that runs on full steam, always entirely aware of trends, demands and success formulae. It has also, unlike in its first hundred years of existence, developed the ability to push motorcycles from the drawing board onto the production line in excitingly short timeframes. This is important in an age when the appeal of any white good, even if it’s something as eternally loveable as a motorcycle, can only be stretched to a maximum of three to four years. After that, you have the journalists breathing down your neck, ever-so-subtly writing you off through resplendent examples of wordplay. Harley-Davidson, therefore, has gotten itself so busy, it’s about to launch fifty — yes, you read that right — new motorcycles by 2020, which is, if I remember correctly, when the meteor strikes, killing everyone.‬

‪Until that happens, however, you have a new Harley to play with and it’s called the Street Rod. The name itself is derived from the two extremes of the Harley-Davidson range, the Street 750 and the V-Rod, and so, it’s a motorcycle that aims to give you the best of both these worlds. This is a task that’s easy, actually, given that the Street’s 750cc motor is already a happily fast one and that the Street always had the potential to turn into a street tracker/power cruiser, thanks to the motorcycle it owes its existence to, the RDX 800 Custom Concept. Why go down this route at all when there are enough options within and outside of Harley’s own aftermarket parts bin for customers to just build their own? A true Harley thrives on personalisation after all, no? True as that may be, H-D hasn’t limited its involvement with the Street Rod to just an aesthetic makeover. There’s a lot to it that reeks of insight and research.‬

‪Like what? Any motorcycle of this format (I think it’s closer to the framework of being a power cruiser rather than an outright street tracker) primarily relies on its ergonomics. The stance, the riding geometry is everything and it is, more often than not, a deciding factor in whom the motorcycle finally appeals to. The Street Rod is, thus, a taller motorcycle, with its seat height itself being jacked up to 765 mm, a whopping 55 mm higher than that of the Street 750’s. Another substantial revision was the sharply reduced steering rake (27 degrees now, down by 5) and the subsequent 10 mm drop in wheelbase, which is now down to 1510 mm. To bring the ‘Rod closer to its intended riding experience, its ground clearance was jacked up by 60 mm as well, bringing it 205 mm off the ground. Rounding off this intense restructuring was the selection of a 17-inch rear tyre as opposed to the 750’s 18-inch (both run 17s at the front) and, at last, a set of optional Michelin Scorcher rubber for those who struggle to find confidence in the MRFs. Oh, and then the designers went on to source the most brutal-looking crowbar they could get their hands on in their Milwaukee basement and passed it off as a handlebar. You have to see the thing to believe it!‬

‪No, that’s not where it ends, by the way. The motor was pulled up for a once-over, too, and a collective decision was made to bump up its compression ratio as well as its redline, which is now 9000 rpm. A larger airbox, along with dual 42 mm throttle bodies were deployed to sharpen the RevolutionX motor’s breathing and responses and, finally, an 11 per cent hike in power (that mysterious figure Harley never wants us to know) and a mild boost to the torque output, up to 6.2 kgm from 6, meant the Street Rod was now deemed fit to hit the streets. The guys in Milwaukee then ran to the paint booth and picked three smashing, if a bit brooding and grungy, tins of paint and gave it the mean visual appeal its components and design philosophy commanded. Aesthetics are subjective, without a doubt, but am I the only one who would love to see the Street Rod in bolder, brighter colours? How about a stars ’n’ stripes edition? Or an NHRA-inspired flaming orange number, perhaps? You’re listening, Mr Chetan Shedjale?‬

‪Thankfully, it’s got the performance to match its menacing skin and this is evident pretty much from the instant you let go of the clutch lever. The thoughtful revisions to the motor have resulted in a package that’s as free-revving and tractable as the Street 750’s but with a lot more low-down torque at hand. You feel the extra layer of substance the motor has acquired and this, coupled with the commanding riding stance, urges you to go straight for the kill. As a result, what you get is a motorcycle that’s breezy at 100 kph and has the potential to go well beyond 160 kph given a long enough straight. The 6-speed gearbox is neither too tall nor too short in its ratios, giving the ‘Rod the distinct ability to be ridden hard in the urban cut and thrust while equally helping you relax out on the open road, even in the company of its bigger, more powerful contemporaries. I particularly loved launching the bike off red lights in Singapore, where I test rode it extensively, and banging down the gearbox has never been more fun on any other Harley-Davidson in recent memory.‬

‪The motor is encouragingly tractable and it somehow feels more substantial as compared to the regular 750’s. This is something that adds value to what is already a fantastic value-for-money motorcycle, especially considering it’s going to be an initiation into the world of big bikes for many in a developing nation like ours. There is, frankly, nothing left to be desired in terms of engine performance; it does exactly what it says it will on the cover. What completes the package, however, to a great deal of justice if not entirely so, is the handling and braking.‬

‪A pair of 300 mm brake discs is mounted on the front wheel (and one on the rear, of course) and ABS is now standard — a welcome addition, and I’m sure I don’t have to make any references from the recent past to tell you why it is. The Street Rod is, unlike the 750, equipped with a 43 mm USD fork (sourced from Endurance — sounds familiar, eh?) and twin gas-charged shock absorbers at the rear, both of which have strong merits… but probably not in synchronisation. The non-adjustable USD fork is set slightly stiff, which is a fair bargain in the name of increased agility, but the rear shocks are set on the softer side, which is great in isolation but not when it comes to focused handling (provided that’s what you’d prefer over a plush ride). Two ends of the same bike should not want to do two different things and although this is an aspect that crops up only under intense riding, the lack of adjustability might get more than a handful of owners grumbling. The easiest fix I can think of is to switch to a different grade of fork oil to make it softer, but a) this is a process of trial and error that will cost you some money and b) you will definitely turn its sharpness down by a few notches.‬

‪Having said that, nothing takes away from how truly involving and delightful a motorcycle the Street Rod really is. It has its imperfections (the off-set rear cylinder can toast your left thigh, although H-D is working on a heat shield accessory for this) and some room for pushing the envelope but, on the whole, the Street Rod has gotten closer than ever before to the idea of the perfect Street-based motorcycle. The Street Rod is, by itself, a lovely little motorcycle to get your hands primed on, until those forty-nine other motorcycles from Milwaukee descend upon us. There’s little else like it out there. And there is, beyond doubt, something reverential about it. Go on, buy one and live the dream, one traffic light at a time.